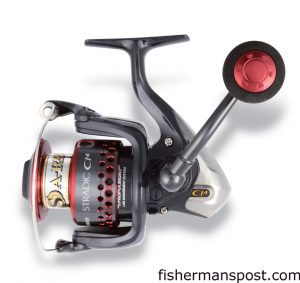 Inshore anglers are constantly in the search for a perfect spinning reel, and tackle manufacturers are constantly engaged in the quest to deliver one that’s as close as possible. Shimano has upped the bar with the new Stradic CI 4 series reels. Available in four sizes from 1000 to 4000, the line has a reel for just about any inshore application that anglers can come up with, and light offshore duties as well.

The most striking difference in the CI 4 reels from Shimano’s venerable Stradic line is in their appearance—instead of a familiar white/silver and gold color scheme, the CI 4’s wear a mean looking gunmetal and metallic red cloak. The reason is far more than cosmetic and ties in with the reels’ new names.

CI stands for Carbon Interfusion, and the reels’ sideplates, frames, and rotors are made of a new reinforced carbon fiber material that is half-again as strong as Shimano’s normal XT-7 graphite at the same time it’s 20% stronger.

Words like “lighter” and “stronger” almost scream braided line, and these reels’ waterproof drags will enable anglers to use the super-strong lines to full effect, as they’re capable of creating from 7-20 lb. of super smooth maximum drag, depending on the model.

The Stradic CI 4’s feature a host of new Shimano-designed systems to enhance their durability, smoothness, castability, and resistance to line twist and tangles.

Paladin Gear Durability Enhancement combines a cold-forged aluminum drive gear with a hardened brass pinion gear that ensures the reels maintain the out-of-the-box smoothness Shimano is known for for far longer than reels with even stainless steel drive and pinion gears.

Aero Wrap II oscillation is a worm gear system with a special pitch that works in conjunction with the Propulsion spool design to provide uniform line lay and spooling shape, further enhancing the castability of the reels.

In addition, the CI 4’s all carry S-ARB shielded anti-rust bearings for prolonged life in the saltwater environment, maintenance ports that facilitate lubrication of the reel without taking it apart, and Direct Drive thread-in handle attachment, which eliminates play in the drivetrain and increases the transmission of power from angler to fish.

The CI 4 reels retail starting at $199.95 and are available at Shimano retailers nationwide. Anglers can find more information at www.fish.shimano.com.