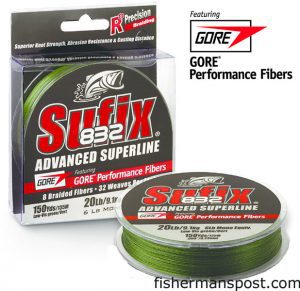 Super-braided lines are certainly the future of fishing, and in most applications they are clearly superior to monofilament, as most anglers have come to realize. Sufix is upping the bar yet again with the introduction of their new 832 Advanced Superline, which combines Gore Performance Fibers with the Dyneema strands that make up many braids. Gore Performance Fibers are found in U.S. military uniforms and astronauts’ spacesuits, and they are resistant to degradation from UV rays, saltwater, solvents, and much more, making them and ideal addition to a superline.

One of braid’s principle virtues over mono is in its superior strength, and, courtesy of the Gore fibers, the 832 line takes it even further, averaging a 20% increase in tensile strength over other braids across its 6-80 lb. test spectrum.

Brute strength is nothing if you can’t maintain it through a knot, and the 832 Superline also offers increased knot strength, averaging 30% higher in a Palomar knot, again, across its entire test spectrum.

One of the reasons is that the 832 line uses an eight carrier (the individual strands that make up the braid) weave instead of the four carriers used by most other lines.

One of the carriers is the Gore fiber. In addition to superior strength, the Gore fiber also enhances the line’s durability. In laboratory tests, the 832 posted three times the abrasion resistance of standard superlines, good news for anglers who fish around rocky jetties, sharp reefs, barnacle-encrusted pilings, and other inhospitable environments for fishing lines.

The Gore fiber also helps 832 Superline maintain its round profile, making it cast even further than traditional braids on spinning and casting reels.

The line also does away with a minor annoyance many have grown accustomed to in braid—it tends to be noisy when going through the guides and coming on or off a reel. The 832 is the quietest superline on the market.

Available in stealthy Lo-Vis Green or gaudy Neon Lime, a Thermal Plastic Gel coloring technology makes sure those hues stay in the line and not all over anglers’ reels, rod handles, or hands.

Sufix makes 832 Advanced Superline in test ratings from 6-80 lbs. (with 2-20 lb. equivalent monofilament diameters), and they’re packaged in 150, 300, and 600 yard spools. Anglers can find it at Sufix dealers and learn more at the website www.suffix.com.