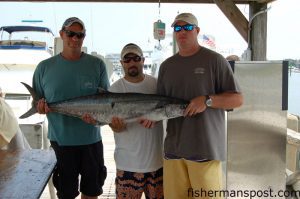 Ryan Clark and Wilmington’s “Neverenuff” fishing team had just enough to take home the top spot at the inaugural Wild King Classic, held August 6-8 out of Seapath Marina and the Wild Wing Cafe, scaling a 33.2 lb. king mackerel to win by half a pound.

Clark and teammates Chad Brown and Doug Richardson, fishing aboard a 24’ Sea Hunt center console, didn’t have an opportunity to pre-fish for the event, but they rode around looking for pogies the day before in order to avoid wasting time searching on tournament morning.

They loaded up the baitwells in the ICW behind Masonboro Island the morning of the event’s first fishing day, Saturday, August 7, and briefly considered fishing Carolina Beach Inlet before heading offshore to the 30/30 area.

“We fished there for a couple hours and caught a couple of small kings before deciding to head for Christmas Rock,” Clark explained.

Finding little action at Christmas, the anglers continued their move offshore, eventually stopping at a ledge in 92’ of water 27 miles off Masonboro Inlet.

“There was plenty of bait there,” Clark continued, “so we made some bait and chose to put down there.”

“I was driving the boat and putting out the long line when it bit,” the winning captain said. “It came unbuckled, and I free-spooled back to her and she came back to it.”

A single pogy on top with a chartreuse Blue Water Candy skirt fooled the 33 pounder, and Clark held on while the mackerel ran.

“She made about four pretty strong runs,” Clark said. “We thought it was a king because she took off and stayed up top. We finally got on top of her and she came up. When she got up in the water column where we could see it, we knew it was a decent king.”

After the fish circled below the boat a few times, Clark finally worked it close enough and Brown sank home the gaff and boated the fish.

“We actually hit an artery with the gaff, and she was bleeding pretty bad,” Clark explained. “We were trying to ice her down to stop the bleeding, and I eventually packed the gaff wound with ice cubes to do it.”

After boating the king, the “Neverenuff” crew headed back toward the beach, stopping at the 5 Mile Boxcars for a brief time before heading on to the scales.

With the captain’s choice, fish one-of-two days format of the event, the anglers had to sit it out Sunday and hope no one scaled a bigger king.

“Fishing’s fishing,” Clark summed up. “You do get beat sometimes, but we knew it was supposed to blow east or northeast on Sunday so we weren’t that concerned.”

Carolina Beach’s Capt. Andy Everhart and the “Southern Sportfishing” crew nearly gave the winners reason to worry as they slid in just behind them with a 32.7 lb. king mackerel they hooked on Sunday.

Fishing with Harold Heglar and Price Gammon aboard a 31’ Yamaha-powered Contender, Everhart decided to spend the day Sunday at Carolina Beach Inlet. After a slow morning, the anglers finally hooked up on a naked pogy on top at 1:30 Sunday afternoon and Heglar was first to the rod.

“That fish made a good first run,” Everhart explained. “Then came back to the boat, but it was staying pretty deep. It took a while to get him up to the boat. We weren’t really sure what it was.” 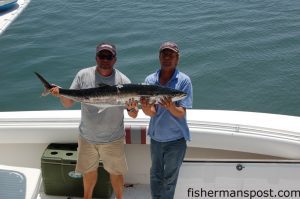 Stuck in a standoff with the fish for around 20 more minutes, the anglers continued maneuvering around it with Gammon at the Contender’s helm. When Heglar finally pressured the fish to the surface, Everhart planted the gaff and the 32 pounder was in the box.

“We headed to the scales after that because we figured the chances of catching another one that big were slim-to-none,” Everhart said.

Fishing on a 27 Contender, the anglers heard of a bite at Christmas Rock from the weekend before the tournament, and they chose to fish the entire day there Saturday.

“We had that fish in the boat at 8:00 that morning,” Aaron Spencer said.

Their money-winning king ate a naked pogy at 7:55 as Edge was putting back out a bait after the team got covered up in amberjacks.

“Mark passed the rod off to me,” Spencer explained. “We figured it was just another AJ.”

The anglers got a glimpse of the fish a short time into the fight and realized they had a decent mackerel.

“He took a pretty good run at first,” Spencer continued, “then came back to the boat. When he came up on the other side, Tom gaffed him. We were happy to have it at 8:00 in the morning.”

Staying at Christmas Rock until 3:00 that afternoon, the anglers caught more amberjacks and a dolphin, but their early fish was their only king bite.

A 22.80 lb. king mackerel earned fourth place for Dave Timpy on the “Thirty Junes,” and the “Rebait” crew weighed in a 17.20 lb. fish to round out the top five.

Capt. Russell Weaver and the “Takin’ Chances/Blue Water Candy” crew earned the top spot in the 23’ and under division with a 17.3 lb. king.

Fishing with his father, Donald, Capt. Jodie Gay, and Chris Edens on a 23 Tournament Onslow Bay, the anglers day on Saturday mirrored the winning boat, starting out at the 30/30 and working their way offshore to the same ledge the winner came from.

The anglers landed a pair of 17 lb. fish during a bite lasting from 1-3 pm, and Donald Weaver fought the fish that earned them a check, with Edens providing the gaff job.

A pogy beneath a pearl/white Blue Water Candy skirt fooled the larger of the two.

The crew would like to express their gratitude to Onslow Bay Boatworks, Blue Water Candy, and Tex’s Tackle for their support.

The Wild King Classic’s organizers wish to thank all the participants, volunteers, and the sponsors who made it possible, including Atlantic Marine, Seapath Yacht Club, Intracoastal Angler, Tex’s Tackle, Towboat U.S., and numerous other local businesses.