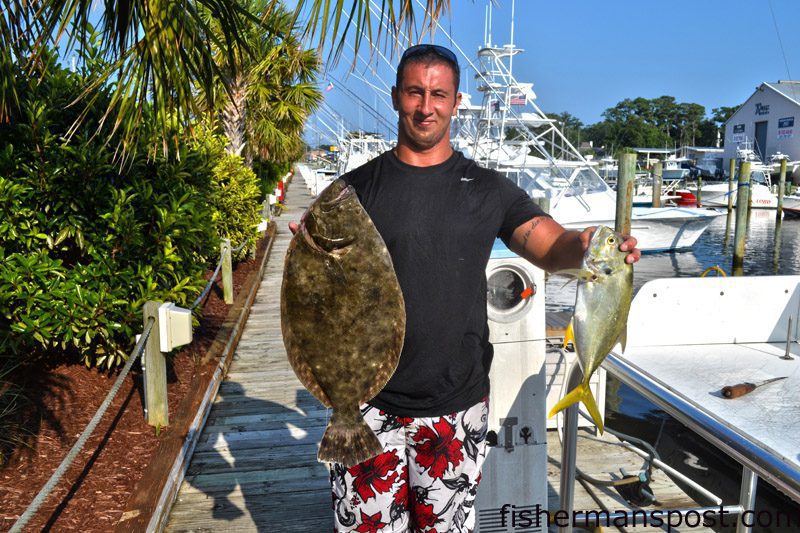 Todd Dini, of Newport, NC, with a flounder and a jack crevalle he hooked on live baits while fishing around Morehead City.

Matt, of Chasin’ Tails Outdoors, reports that anglers are still hooking big numbers of sheepshead around the port wall and bridge and dock pilings throughout the area. Live sea urchins and fiddler crabs are the top bait choices for the sheeps, and anglers had better luck over the past week on the urchins than on crabs.

Some speckled trout are feeding in the Haystacks and Core Creek, with more speck action in the Neuse River. Live shrimp and mud minnows under popping corks are producing most of the fish, but anglers are also hooking up on topwater plugs, Gulp baits, and MirrOlures.

Anglers are finding some slot and over-slot red drum feeding around Fort Macon, and they’re hooking them on finger mullet and other baits.

The flounder bite is going strong (with some large fish to nearly 10 lbs. taken recently) around deep inshore structure like the port wall and bridges. Most of the larger fish are falling for live baits.

Plenty of smaller (but still keeper) flounder are being hooked by anglers drift-fishing the channels behind Shackleford and in the ICW. Both mud minnows and Gulp baits are producing action.

And there’s still some excellent flounder fishing at the nearshore reefs, where 2 oz. bucktails tipped with Gulp baits are producing most of the action.

Large spanish mackerel continue to chase bait at the same structure in the ocean, and anglers can tempt them to bite small live menhaden or finger mullet.

Plenty of smaller spaniards and bluefish are feeding around the inlets and beachfront, where anglers can hook them on trolled Clarkspoons or cast metal jigs to fish on the surface.

The king mackerel bite is heating up, with snake kings feeding around the shipping channel and most of the offshore wrecks and some bigger fish at east side hotspots like AR-285 and the Atlas Tanker. Live menhaden or dead cigar minnows will get attention from the kings.

Some bailer dolphin have moved inshore to the 10-20 mile range, but the bite’s still best out around the 90’ Drop and Big Rock. Some wahoo and sailfish are mixed in with the dolphin offshore, and all will take an interest in skirted or naked ballyhoo. 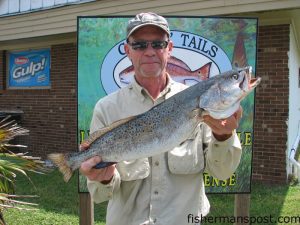 Tom Blevins, of Morehead City, with a 5.5 lb. speckled trout he hooked in Core Creek on a live shrimp. Photo courtesy of Chasin' Tails Outdoors.

Bottom fishermen are still finding fast action at ledges and live bottoms 30-35 miles offshore. Grouper, amberjacks, sea bass, triggerfish, and a variety of smaller bottom dwellers are all feeding at those spots. Anglers can tempt them to bite menhaden, cigar minnows, and squid on bottom rigs.

Paul, of Freeman’s Tackle, reports that anglers are hooking some sea mullet, croaker, spot, and other bottom dwellers in the surf and from the pier. Shrimp and bloodworms are tempting bites from the panfish. Some pompano are biting shrimp and sand fleas.

The spanish mackerel bite is still excellent for those trolling Clarkspoons in clearer water around the inlets and beachfront.
Larger spanish are feeding at the nearshore reefs, and anglers slow-trolling live finger mullet or peanut menhaden are tempting them to bite.

The king mackerel bite has been good east of Cape Lookout Shoals for weeks, but it’s now spread from there west to spots like the Hutton. There haven’t been many large menhaden around for king baits, so most of the bigger kings have been falling for live bluefish lately.

Offshore trollers are still finding decent action with dolphin and some scattered wahoo.

Inshore, schools of red drum (from under to over-slot) are feeding in the marshes, where anglers are tempting them to bite topwater plugs, spinnerbaits, Gulps, and live baits.

Plenty of flounder are feeding all over the inshore waters, with the largest fish around deep structure. Live baits like mud minnows are the way to go for the flatfish.

Charlie, of Old Core Sound Guide Service, reports that the large red drum bite is going strong in the Pamlico Sound off Cedar Island and around the mouth of the Neuse River. Big cut baits fished on the bottom are the way to fool the “old drum.”

The speckled trout bite has been tremendous around Cedar Island, Turnagain Bay, and other spots near where the Neuse meets the Pamlico. A variety of lures will tempt bites from the trout, but Brown Lures soft plastics have been particularly effective lately. Good numbers of puppy drum (to 30”) and flounder are mixed in with the trout.