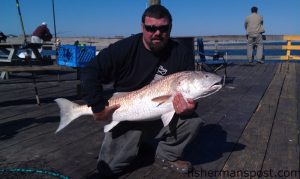 Joey Kellum, of Jacksonville, NC, with a 45″ red drum he caught and released from Avalon Pier just before Hurricane Sandy damaged the structure.

Betty, of TW’s Tackle, reports that anglers are hooking some bluefish and smaller puppy drum while soaking bait in the Nags Head surf.

There’s also been a good speckled trout bite around south Nags Head, and the specks are falling for baited bottom rigs, soft plastics, and MirrOlures (which are also fooling the puppy drum and blues).

Pier anglers are hooking much of the same, along with a few sea mullet.

Anglers fishing the little bridge on the Nags Head causeway have been connecting with a few puppy drum over the past week.

The offshore fleet is still finding some wahoo while trolling out of Oregon Inlet, and tuna fishing has been fairly solid, with good numbers of blackfin and yellowfin hitting the docks. Some dolphin are still in the mix. A few sailfish and a blue marlin have also been released in recent days. Ballyhoo paired with skirted trolling lures are fooling most of the pelagic gamefish. 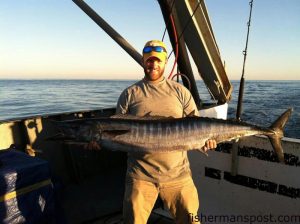 David Supa, of the Cape Fear Community College Marine Tech Program, with a 42 lb. wahoo that he hooked 34 miles off Oregon Inlet on a purple/black Monkalur while trolling from the R/V Dan Moore.

Deborah, of Oregon Inlet Fishing Center, reports that yellowfin tuna have been the main action for the offshore fleet lately. Some dolphin are still around as well, and scattered blackfin tuna and wahoo have also been brought in lately.

Several sailfish have been released over the past week, and boats are also hooking sharks while trolling.

Boats stopping the troll to bottom fish have been hooking big numbers of tilefish.

Not many boats have been nearshore fishing lately, but big catches of bluefish have been the reward for those who are going. Trolled spoons and a variety of casting lures are tempting bites from the blues.

Mike, of Jennette’s Pier, reports that high winds and cool temperatures have kept some fishermen from the pier recently, but those there are finding action.

Anglers have been catching big numbers of puppy drum while soaking bait off the pier. Some sea mullet, hake, and black drum have also been taking an interest in baited bottom rigs in recent days. 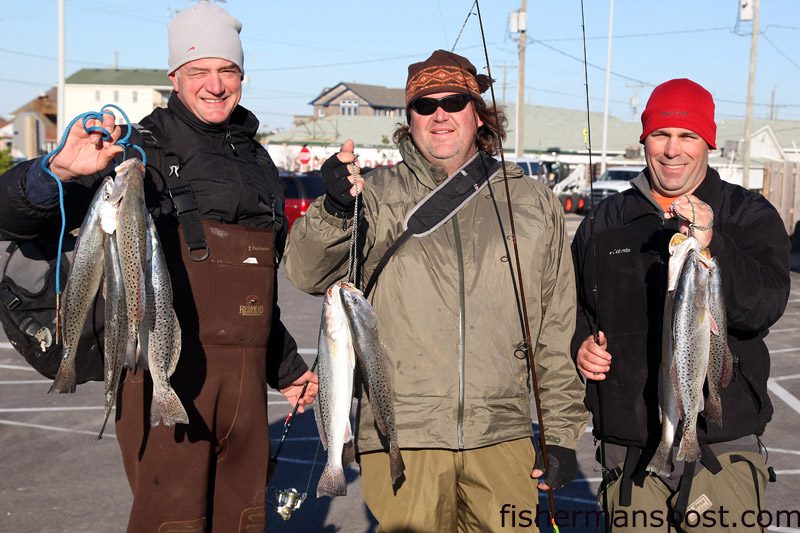 John Cain, of Raleigh, Ted Goscinski, of Southern Shores, and Brian Yelverton, of Centreville, VA, with stringers of speckled trout that they hooked on soft plastic baits at Jennette’s Pier.

Dave, of Skiligal Sportfishing, reports that anglers are finding mixed bag action off the inlet. The fall yellowfin tuna bite is cranking up, and some wahoo, longfin albacore, and blackfin have been joining the yellowfins in the fish box. Most of the fish are falling for ballyhoo trolled under skirted lures like sea witches.

Keith, of Corolla Bait and Tackle, reports that anglers are connecting with some puppy drum and speckled trout in the Corolla surf. They’re taking an interest in cut baits like squid and mullet on bottom rigs and falling for soft plastic baits like Gulps.

The trout bite is also good in the sound, where Gulp baits are fooling the specks along with a few flounder.

When the weather lets boats get offshore, they’ve been finding some action with yellowfin and blackfin tuna, along with some straggler dolphin still in the area.