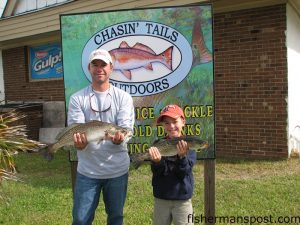 Brent and Max Andrews, of Snow Hill, NC, with 4.67 and 3 lb. speckled trout they hooked on MR17 MirrOlures in the Neuse River.

Gary, of Spec Fever Guide Service, reports that the mixed-bag fishing in the lower Neuse River is excellent right now. Most of the action has been in the creeks, where anglers are hooking speckled trout, puppy drum, flounder, and even a few striped bass. There’s also been a decent bite on some of the river shorelines. Though the action’s hot and heavy when anglers find the fish, it can take a little searching to locate them, so anglers should stay on the move until they find the bite.

Both D.O.A. soft plastic lures and suspending hardbaits like MirrOLures and Rapalas are proving effective on all the fish.

The striped bass are showing up with greater frequency around New Bern. Anglers can find them near shallow shoreline structure and around deeper spots like bridges and ledges. Topwater plugs have been effective lately, but clear water has meant it’s generally an early morning bite (and also has the fish spooky, so stealth is essential). When they’re not feeding on top, soft plastics on appropriately-sized jigheads will tempt the stripers to bite.

Dave, of Knee Deep Custom Charters, reports that storms and wind have made getting out on the water a bit tough lately, but the fish are still around and hungry.

Speckled trout have begun moving toward the backs of local creeks, where they’re schooling up for the winter. Several citation fish (5-6 lbs.) have been weighed in recently, and anglers should see more big fish as the water continues to cool. 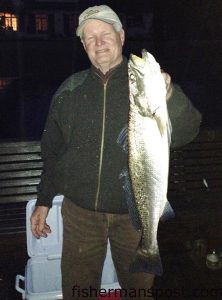 Buck Jones with a 28″, 6.2 lb. speckled trout he hooked in the Neuse River. Weighed in at Minnesott Beach Bait and Tackle.

Striped bass are feeding around the creeks in the lower Neuse River and along ledges and other structure upriver towards New Bern (with some to 15 lbs. reported lately). Several have been hooked by anglers trout fishing in the past week, so be ready for a hefty surprise when casting artificials for specks right now.

Richard, of Tar-Pam Guide Service, reports that the speckled trout fishing has been stellar in the Pamlico Sound lately, and the bite should remain hot over the next few weeks as the fish begin to move towards their winter haunts in the rivers and deeper creeks. A wide variety of artificial lures are producing results on the specks, with TT-series MirrOlures seemingly tempting bites from the biggest fish lately.

Anglers can also expect to see some solid topwater action for striped bass in the coming weeks in the upper Pamlico River near Washington.

Richie, of East Side Bait and Tackle, reports that the speckled trout bite is as good as many anglers have seen it in the area right now. The fish are scattered along the river from Washington down, and they are beginning to make their wintertime move into the creeks. Most are falling for 17 and 18MR MirrOlures, with the new C-Eye Pro Series particularly effective.

The striped bass action is also on fire around the bridges and other structure near Washington. The fish have been reluctant to bite topwater plugs, but subsurface hard baits like Rattlin’ Rogues and Rat-L-Traps have been producing plenty of action.

Donald, of Custom Marine, reports that anglers are catching big numbers of speckled trout in the Neuse right now, both from boats and shoreline piers. MirrOLures are producing the lion’s share of the action, with the new Pro-Series 17MR’s the hottest baits currently.