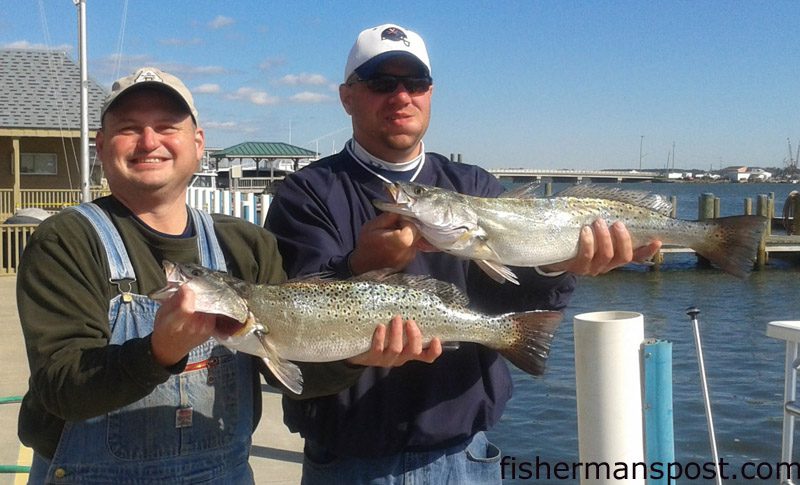 Brandon McCormick and Brent Shoaf, of Winston-Salem, with 6.9 and 5.3 lb. speckled trout that bit live shrimp near Swansboro while they were fishing with Capt. Chris Sewell of Fishead Charter.

Rob, of Sandbar Safari Charters, reports that the speckled trout bite is on fire all along the Crystal Coast right now. Anglers are finding the fish in the creeks, up the White Oak River, around the inlets, and in the surf zone. Live shrimp are tough to beat for the specks, but anglers are also hooking big numbers on soft plastic jerkbaits pinned to light jigheads.

Plenty of puppy drum (most 15-20”) are mixed in with the specks and falling for the same lures. Larger upper and over-slot reds have moved out to the surf zone, and on calm days anglers can look for schools from boats just outside the breakers. The surf fish aren’t picky, so once anglers find a school, they’ll likely be able to hook up on a variety of lures.

Some false albacore are schooled up and chasing bait within a few miles of the inlets. Anglers who spot a school feeding on the surface can tempt them to bite metal casting jigs or other small, flashy lures.

Robbie, of Hall’em In Charters, reports that anglers are hooking big numbers of speckled trout in the surf, up the rivers and creeks, and just about everywhere in between. Limit catches have been common over the past few weeks (with most fish around 2 lbs. but some pushing 4 lbs. in the mix). Live shrimp and clear D.O.A. shrimp are producing the lion’s share of the trout action, but a variety of other artificials will get the job done as well. 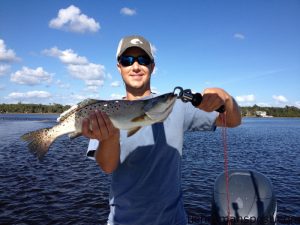 Parker Barham with a 22″ speckled trout that bit a live shrimp in the backwaters near Swansboro.

The red drum bite has slowed down in the backwaters, but upper and over-slot reds are schooled up in the surf. Anglers who locate the schools can catch big numbers while casting MirrOlures, soft plastics, and other artificials.

Flounder fishing remains solid in the marshes behind the barrier islands. Creek mouths have been holding the most fish, where anglers are hooking them on white Gulp baits.

Rich, of The Reel Outdoors, reports that anglers are catching big numbers of speckled trout and puppy drum from the beach at Emerald Isle right now. They’re falling for a variety of baits, but MirrOlures and Gulp jerk shads seem to have been the most effective artificials recently. The bite has slowed down just a bit with the recent warm days, but it should improve with the next cold front.

Anglers soaking bait in the surf are connecting with big numbers of pufferfish, sea mullet, and some black drum. Shrimp have been the best baits. 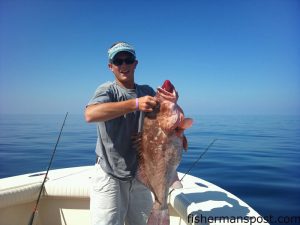 Joseph Taylor, of Sanford, NC, with a 21 lb. red grouper that bit a live grunt while he was fishing some structure 45 miles off Bogue Inlet on the “Droptyne II.”

The speckled trout bite is also hot inshore, where anglers are hooking the fish up Queen’s Creek and the White Oak River and in other local creeks. Live shrimp have been the best bets inshore, but anglers are also catching good numbers of fish on soft plastics and suspending hard baits.

Offshore, the wahoo bite remains solid when boats get the weather to make the run to Gulf Stream hotspots like the Rise and Swansboro Hole. Ballyhoo paired with dark-hued trolling lures are the way to go for the wahoo.

Cathy, of Bogue Inlet Pier, reports that there’s been a solid speckled trout bite off the pier, with most of the fish falling for soft plastic baits. Some puppy drum are also taking an interest in the soft plastics.