Made In NC: Advanced Fishing 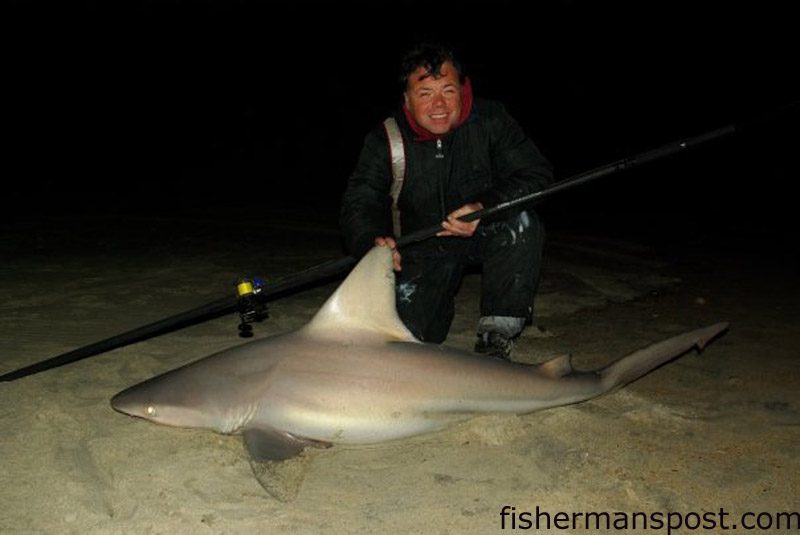 Leisure and work combine when White tests custom rods like this Century Eliminator E1000 against predators like this Hatteras Island sandbar shark.

With just a few minutes left before the 10:00 pm registration deadline, a blue Jeep Cherokee pulled into the parking lot at the 2012 Pleasure Island Surf Fishing Challenge. The interior of the SUV was occupied by a collection of high-end surf tackle trumping the value of the vehicle many times over, with just enough room left over for Ryan White to squeeze into the driver’s seat.

His next question was a logical one: “Where can I find some bait around here?”

While most of the tournament’s participants had secured bait and beach real estate far earlier in the day (and in many cases, earlier in the week), White was coming in hot from another surf tournament on Hatteras Island with no time to spare.

After he’d filled out an entry form and gained a little intel about where to toss a cast net in the area, White and the blue Jeep vanished back into the night.

While he certainly hoped to cash in on some of the tournament’s prize money, the trip was at least equally business and pleasure for the journeyman, as he was putting on a Century Rods demo and casting clinic concurrently with the event.

Years of tournament distance-casting led White to British-based Century, and the brand now leads him on a regular circuit of the U.S. east coast for demos, casting clinics, tournaments, and tackle shows.

“Century rods have held the world records for distance casting for the last 12-15 years,” White explained. “And they were making some really great rods, but nothing applicable to the US market for fishermen.”

While long casts into rough surf are staples on both sides of the Atlantic, the similarities in fishing style end there.

“In Europe, catching an 8 lb. cod from the beach would be a big deal,” White said. “Here we’ve got big drum and stripers.”

In addition to rods, the company builds composite parts for Formula 1 race cars and the aerospace industry, and White wanted to find a way to apply the company’s advanced manufacturing technologies to the needs of anglers on the other side of the ocean.

“About 6-7 years ago I approached Century about designing a line of rods to meet the specific needs of USA anglers,” White explained, “and we started working together. We played around with designs for years before they began manufacturing what is now known as the Slingshot Series.”

With White’s input, the line expanded to a series of blanks for US surf casters, ranging from an 8’ MirrOlure and grub rod on up to 12-13’ heavers that will send a half-pound plus of lead and bait packing for the horizon. 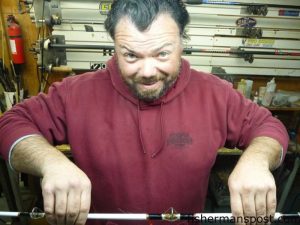 Ryan White putting finishing touches on a rod at Hatteras Jack in Rodanthe with a variety of custom surf rods waiting on their finishes to cure in the background.

The Slingshot rods entered the U.S. market three years ago, and the tackle shop owner’s travel mileage has been climbing since.

“I used to do 1-2 shows a year,” White explained. “Since Century took off, I’m running nonstop. I make at least a trip a month to the Northeast doing demos and taking care of clients. I’m about 50/50 between at home and on the road these days.”

The reason for his frequent forays north lays in the obsessive population of striped bass surf casters from New Jersey to Maine, who have taken to Century’s offerings like moths to a flame. While they’ve been a touch slower to catch on down south, many of the equally fervent Outer Banks red drum aficionados now count a Century heaver among their quivers, and anglers fishing for a variety of species up and down the seaboard are taking to the rods as well.

“I’ve got people fishing them in every state from Maine to Florida now,” White said.

The rods’ growing popularity among all sorts of surf anglers are a result of a number of factors, but the principle draw is the same thing that brought White to the rods—they’re capable of sending baits and lures distances that other rods simply can’t match, a fact the record books confirm.

White offers both blanks and built rods through Advanced Fishing USA, and while the features of a fully custom rod are limited only by the buyers’ imagination and budget, the most popular configurations are what White refers to as “factory customs.”

“They’re functionally custom rods,” he explained. “We’re using high grade materials, but they aren’t fancy. We try to make the rod perform as well as any custom can while keeping the price as low as we can.”

Fuji Alconite K and Hardoloy guides and DSP reel seats are standard on the factory customs, with a simple black and silver color scheme. As mentioned, buyers can trick the rods out with any combination of colors, wraps, guides, reel seats, and grip materials, but they need only do so to suit their personal tastes instead of improving their performance.

Blanks are also available for home or professional rod builders to put their own touches on.

In addition to the Sling Shot, White has now added Stealth and Full Assualt lines to his series of rod blanks tailored to stateside surf casters, and backwater and offshore boat rods are forthcoming in 2013.

White’s Advanced Fishing USA is Century’s sole US importer, and anglers can learn about all their offerings at his website www.advancedfishing-usa.com, which will soon be undergoing a major overhaul.

Custom rods aren’t the only thing keeping White busy, as he tricks out conventional and spinning reels to give anglers maximum casting distance and performance at the Hatteras Jack store as well, with more information available at www.hatterasjack.com.

It’s safe to say Ryan White’s travel itinerary won’t be lightening any time soon, so if you spot a four-wheel drive bristling with rods and sporting Advanced Fishing USA graphics somewhere between Maine and Miami, flag him down for a demonstration and be prepared to see the longest cast of your life.