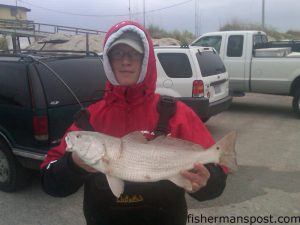 Jake Worthington (age 15), of Camden, NC, with a puppy drum he hooked in the Frisco surf.

Ryan, of Hatteras Jack, reports that puppy drum have been feeding in the surf along Hatteras Island all winter long, and the action is still going. The best reports are coming from the Hatteras and Oregon Inlet areas where anglers are hooking up on bottom rigs baited with shrimp and a wide variety of soft plastic baits.

Some sea mullet and pufferfish have already shown up around Hatteras Inlet, and anglers can expect the fish to get more numerous and move north as the water warms up over the coming month. The puppy drum fishing should also get even better when climbing water temperatures get the fish more active.

As the water approaches 60 degrees around Ocracoke and Hatteras, anglers should see some of the year’s first large red drum showing up along with some bluefish.

The area’s speckled trout took a blow when icy weather led to some fish kills over the winter, so anglers are waiting to see if there will be much of a spring trout bite this year.

Ginger, of Frank and Fran’s, reports that anglers are connecting with puppy drum around Cape Point, the Buxton jetties, and the old Frisco pier. Both soft plastic grubs and natural offerings like shrimp and cut baits will tempt bites from the pups, and the action should only get better with the arrival of spring. A 41” red drum was also caught and released by an angler chasing puppy drum at Cape Point recently, so it may not be long until anglers see a spring run of the larger reds.

Pufferfish and sea mullet will also be making an appearance in the island’s surf as the water temperatures approach 60 degrees.

Bob, of Frisco Tackle, reports that puppy drum have been providing plenty of action for local anglers over the winter, and the bite is still on. The area around Ramp 49 is providing some of the most consistent fishing at present. Soaking shrimp on bottom rigs and casting Gulp baits have both been effective tactics on the reds. 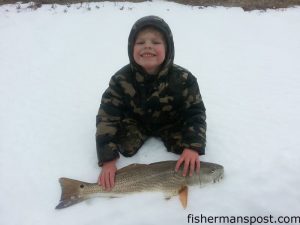 Liam Van Druten with a puppy drum he hooked in the Frisco surf while fishing with his father. Photo courtesy of Frisco Rod and Gun.

Some pufferfish and sea mullet have also shown up along the south-facing beachfront, and anglers will see more of the tasty panfish as the water warms up over the next month.

Kyle, of Frisco Rod and Gun, reports that anglers have been catching puppy drum from the surf all winter long, with Cape Point and Ramp 49 particular hotspots. The pups are biting both baited bottom rigs and soft baits like Gulp swimming mullet, and anglers are hooking solid numbers on many days.

Some sea mullet and pufferfish have already been landed by surf casters on Hatteras’s southern beaches, and it won’t be long until spring fishing for the tasty panfish is in full swing. Shrimp and Fish Bites baits on double-drop rigs are top choices for both.

Offshore, the big story is that bluefin tuna have arrived within range of the Hatteras fleet, and several have already been landed. Trolling ballyhoo along with skirted lures or working vertical jigs and topwater poppers around fish that anglers spot on sonar or the surface is the way to connect with the bluefins. A few blackfin tuna and other blue water predators are also feeding offshore and will fall for smaller trolling offerings.

Offshore bottom fishing has been producing plenty of action with black sea bass, triggerfish, tilefish, and some grouper.

Jay, of Bite Me Charters, reports that bluefin tuna have shown up within striking distance of the Hatteras fleet, and boats have already hooked several while trolling and working vertical jigs. The fish have been a bit tough to get to bite recently, but the action should improve over the coming weeks.

Melinda, of Tradewinds Tackle, reports that anglers have been hooking puppy drum nearly all winter long from the Ocracoke beachfront, and the action continues. Most are falling for soft plastics and other artificial lures that provoke reaction strikes in the cold water, but anglers are also connecting on bottom rigs baited with shrimp.

The puppy drum should begin feeding more actively as the water warms up over the course of the month, and surf anglers may also see action with pufferfish and sea mullet as winter turns to spring.

Offshore, a boat landed amberjacks and several cobia this week while fishing on some offshore structure.