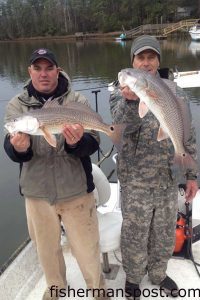 Mark, of Shallow Minded Inshore Fishing Charters, reports that despite the cold temperatures, there’s been solid inshore action all around the area over the past winter. Red drum are schooled up in shallow water in area creeks and marshes, and anglers with flats boats and other skinny-water craft have been sight-fishing the schools with plenty of success. The reds are still in mixed schools, so anglers may hook under and over-slot fish while working the same areas. Soft plastic baits like Gulps and cut shrimp have been producing most of the action with the reds, but anglers have also had some excellent days casting flies to fish in the shallow water.

There are also reds feeding along ICW structure like docks where they’ll pounce on cut shrimp. As the water warms, anglers found solid action with the reds at the Little River jetties last weekend as well, hooking them on live mud minnows and Vudu shrimp drifted beneath popping corks.

Some black drum are mixed with the reds inshore and also feeding around Sunset Beach Bridge. Cut shrimp are top choices for fooling the crustacean-lovers.

Anglers can expect the drum to group up according to size and scatter out through the inshore waters. Once the area’s crabs begin shedding this spring, anglers can hook big numbers by baiting up with chunks of soft-shell crab when other baits prove ineffective.

Speckled trout have also been feeding in the area for much of the winter, with Coquina Harbor and the Shallotte River producing particularly good fishing. Anglers are hooking solid numbers on the new Vudu Shrimp, which have been outfishing Gulp and other artificials of late. Fly casters are also hooking up with the specks on Clouser Minnows and other patterns. 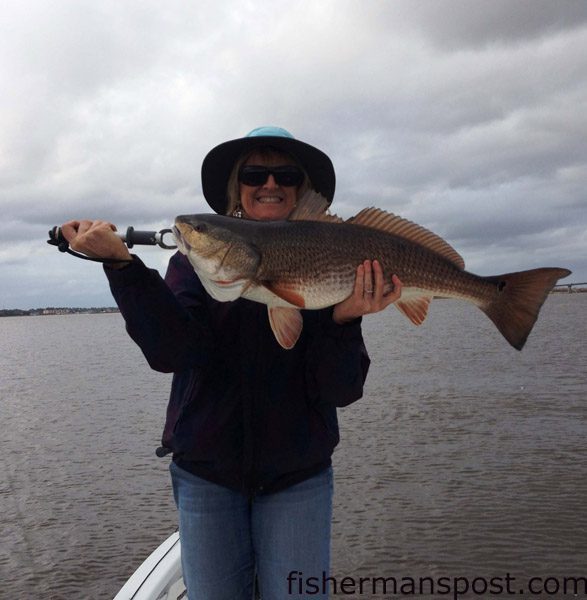 Susan Darnell, of Wilmington, NC, with a 14 lb. red drum she hooked on a Gulp shrimp under a popping cork while fishing with Ronnie Riggs near Georgetown, SC.

Some smaller specks are looking for meals in the Ocean Isle canals and have been vulnerable to the Vudu Shrimp as well.

Like the reds, the trout will spread out a bit once the water temperatures rise, and anglers often see an excellent speck bite at the Little River jetties in early spring.

A reasonable number of flounder have been landed alongside the specks and reds over the winter, and anglers can expect the flatfish to get more numerous and active as spring wears on.

Patrick, of Capt. Smiley’s Fishing Charters, reports that red drum were feeding at the Little River jetties over the past weekend, and warming water over the next month should keep the bite going. Drifting float rigs past the jetty rocks is the most productive strategy, and both live mud minnows and artificials like Vudu Shrimp will tempt bites under the floats.

Black drum are feeding around inshore structure like bridge pilings and docks, and fresh shrimp and crabs will produce fast action with the striped drum when anglers locate a productive structure.

Area anglers are reporting some solid speckled trout action in Coquina Harbor and the Ocean Isle canals. Shrimp imitations by D.O.A. and Vudu are attracting plenty of attention from the specks.

Anglers casting artificials for both the specks and trout will up their odds of success in the cool water by using scents like Pro-Cure Super Gel to make their offerings more enticing.

Warming water over the coming month will improve the action for all the inshore species in the area.

Matt, of Cherry Grove Pier, reports that anglers are hooking some small sea mullet, croaker, and perch while bottom fishing from the planks. Shrimp is fooling most of the fish.

The water is 51 degrees, and once it hits the upper 50’s, anglers can expect to see pufferfish and larger sea mullet show up, along with some bluefish. Red and black drum will also begin making their way out of the backwaters and feeding around the pier.