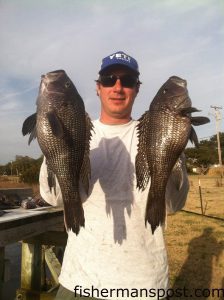 Capt. Rob Koraly, of Sandbar Safari Charters, with a pair of fat black sea bass that struck Blue Water Candy Roscoe jigs at some bottom structure in 100′ of water off Bogue Inlet.

Rich, of The Reel Outdoors, reports that there’s been some solid action with red drum for anglers fishing the bays and flats behind the barrier islands recently. The fish have been schooled up and are easiest to find and fool on warmer, sunny days. Soft plastics like Gulp baits are the best bets for the reds in the cooler water of early spring.

More reds should be schooling up along the beachfront near Bear and other local inlets. Soft plastics on heavier heads, MirrOlures, and metal spoons will all tempt bites from the fish in the surf.

Surf and pier anglers should also see the arrival of pufferfish and sea mullet as the water warms up over the coming month. Bottom rigs baited with shrimp or bloodworms are the way to go for both tasty panfish.

Offshore, anglers should be able to find action with black sea bass around bottom structure within a few miles of the beaches. More consistent action with bigger bass will be out in the 20+ mile range, however. Some flounder will be feeding in the same areas as the bass as well. Bottom rigs baited with squid and cut baits and small vertical jigs will fool the bass, and Gulp-tipped bucktails will attract attention from flounder.

Offshore, wahoo and blackfin tuna are feeding along the break when the weather’s tame enough to make the long run. Ballyhoo paired with skirted trolling lures will fool both blue water predators.

Rob, of Sandbar Safari Charters, reports that anglers are finding some large schools of red drum in the backwaters of Bogue Sound, but the inconsistent weather and cold north winds have made them tough to tempt to bite lately. Typical cold-weather tactics like slowly retrieving or dead sticking Gulp baits, shrimp, or live mud minnows have been the best bet to coax the reds into feeding. Anglers able to locate some crabs will up their odds of success, as the reds have a tough time turning down a smelly crab chunk fished still on the bottom. 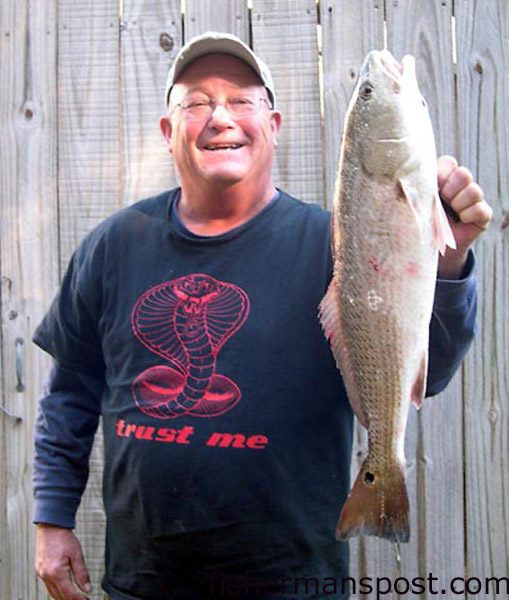 Capt. Rob Koraly, of Sandbar Safari Charters, with a pair of fat black sea bass that struck Blue Water Candy Roscoe jigs at some bottom structure in 100′ of water off Bogue Inlet.

Black drum are feeding around inshore structure and in the local mainland creeks. Cut shrimp and crab chunks are equally effective on the black drum as the reds.

Action with both of the drum species should get even better as spring brings more consistent weather and warmer water temperatures.

Offshore, bottom fishing and working smaller vertical jigs in 100’+ of water is producing fast action with fat black sea bass, red porgy, and other tasty bottom dwellers. Squid, cut baits, and jigs like the 2 oz. Blue Water Candy Roscoe have all been producing plenty of bites. The bottom action should be consistent as long as anglers have calm enough weather to make the run offshore.

Robbie, of Hall’em In Charters, reports that some large schools of reds (75-400+ fish) are feeding on the local flats, and anglers have had some excellent days sight-casting to them recently (with plenty of 24-26” upper-slot fish). Soft plastic baits including Gulps, Salty Bay Baits, and Zoom Flukes are all effective on the reds, and scents like Pro-Cure Super Gel have made the offerings even more appealing. Several fell for topwater plugs last week as well, so anglers may have a shot at some surface action on warmer days in the coming weeks.

Some black drum are feeding in the mainland creeks off Bogue Sound, especially around structure like docks and oyster bars. Cut shrimp on bottom rigs are tough for the black drum to pass up.