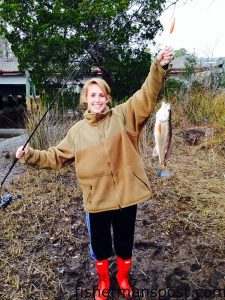 Kelsey Claiborne, of Wilmington, with a puppy drum that bit shrimp under a slip float in a Sneads Ferry creek while she was fishing with Brent Hinson.

Chris, of East Coast Sports, reports that red drum have been providing the majority of action for local anglers over the course of the winter, and they’re still feeding in the surf and in the local creeks off the ICW and New River. The surf fish are schooled up on the shoals of New Topsail and other nearby inlets, where anglers are hooking them on soft plastic baits pinned to jigheads and metal lures like gold spoons.

Surf casters are hooking a few on baited bottom rigs up and down the beachfront at Topsail as well.

Inshore, the fish are holding in the backs of creeks where soft plastics or fresh shrimp will tempt them to bite.

A few black drum are feeding alongside the reds in the creeks, and they are also taking an interest in shrimp.

Speckled trout fishing has been a bit slow following the hard freezes this winter, but anglers are also finding some specks in the creeks and fooling them with soft plastics and suspending hard lures like MirrOlure MR17’s.

Pufferfish have begun to show up off the island’s piers, and warming water over the coming weeks should turn on the springtime action for the tasty little fish. Anglers should also begin seeing some sea mullet trickle in on the piers and in the surf over the next month. 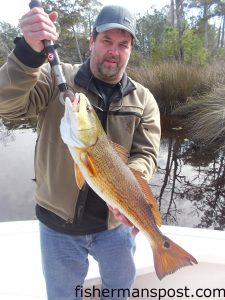 Donnie Alley, of Burlington, NC, with a slot red drum that bit a TTF Hackberry Hustler soft plastic in the New River while he was fishing with Capt. Allen Jernigan of Breadman Ventures.

Out in the ocean, black sea bass are feeding at bottom structure within a few miles of the beaches. Bottom rigs baited with squid or cut baits, as well as small vertical jigs, will both fool the bass, but anglers may have to weed through a good number of undersized fish in order to connect with the keepers.

Schools of false albacore were reported in the 20 mile range off the beach last week, and warming water temperatures over the next month should push them a bit closer to shore. Anglers who want to connect with the hard-fighting falsies can search for fish feeding on the surface or diving birds, and then cast small, shiny metal lures toward the action to hook up.

Not many boats have made the run to the Gulf Stream recently, likely due to the weather, but wahoo should be feeding along the break once anglers get the opportunity to make the run.

Daniel, of Flat Foot Fishing Charters, reports that anglers are connecting with red drum in the surf on sunny, calmer days when they can spot schools of fish working the suds. Casting soft plastics or spoons to the schools will often tempt them to bite, although the reds can be a bit finicky in the cooler water. The action should hold up through the month of March as long as the weather stays cool.

Large schools of smaller reds are feeding in the inshore creeks. Fishing on sunny days and targeting areas with dark mud bottoms will give anglers the best odds of finding the creek reds.

Some black drum are looking for meals around structure inshore, and they will fall for natural baits like shrimp and clams fished tight to their homes. 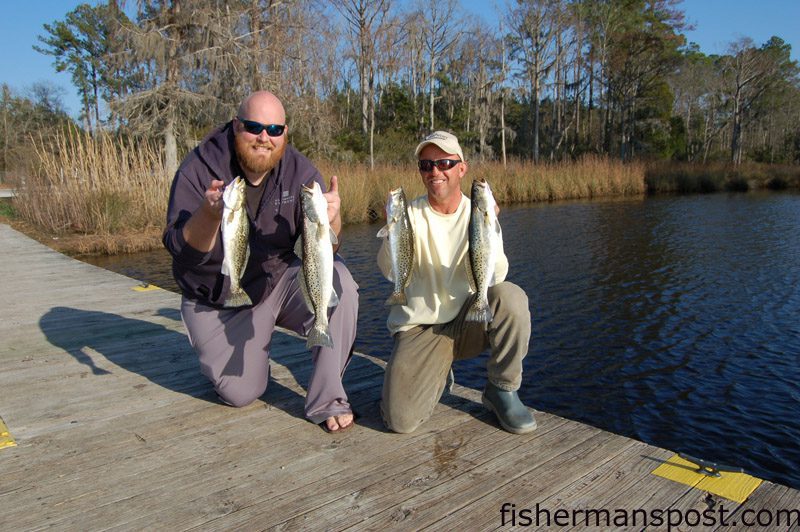 Joshua Alexander and Capt. Ricky Kellum, of Speckled Specialist Charters, with a brace of speckled trout that struck soft plastic baits while they were fishing the Neuse River near New Bern.

Black sea bass are feeding at nearshore structure in the ocean, and anglers should be able to put together some keepers within 10 miles of the beach when it’s nice enough to get out. Some tautog are in the same areas, and both will pounce on bottom rigs baited with shrimp or squid.

Allen, of Breadman Ventures, reports that there’s been some excellent action with slot and over-slot red drum in the local shallows recently, and anglers are getting solid sight-fishing opportunities when the weather allows. The bays and flats off the New River have been producing most of the action with the skinny-water reds recently, and soft plastics like Saltwater Assassin and TTF baits along with gold spoons have been the most effective offerings.

Mike, of Native Son Guide Service, reports that schools of red drum are working the beachfront around the local inlets, and anglers who can find the schools of fish can enjoy some solid days of fishing. Soft plastic baits or metal lures like gold spoons will tempt bites from the reds when they’re in a feeding mood.

Inshore, some more reds and speckled trout are feeding in the local creeks, but the cool water temperatures are making it tough to tempt them to bite at present.

Warming water and the arrival of more bait as spring winds on should get the fish more active and improve the action inshore.

Black sea bass are feeding around bottom structure not far from local beaches, but anglers looking to bring home a mess of the fish to eat may have to work out to the 20 mile range to connect with keepers.