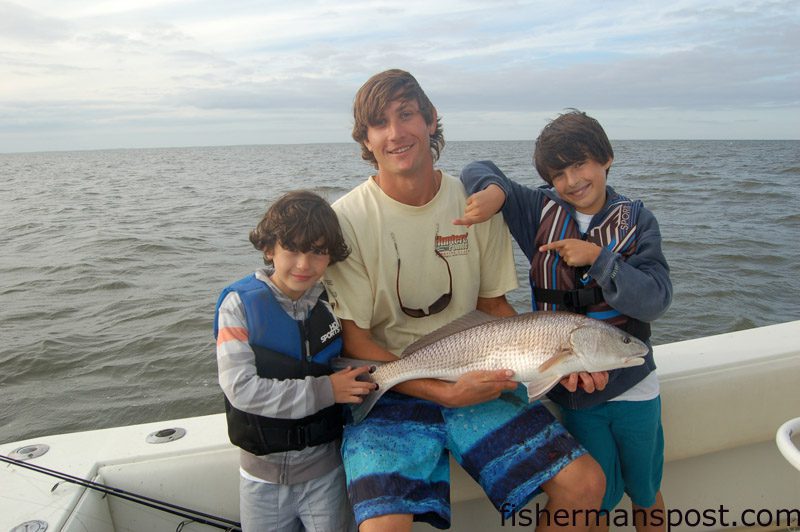 Capt. Jennings Rose, of North State Guide Service, holds the 30″ red drum that James (left) fought most of the way to the boat and Owen (right) brought the rest of the way in. They were fishing cut bait on a grass bank in the mouth of the Neuse River.

Taking the family the next day out on the Pamlico Sound to catch red drum was on my mind at the time, and my wife was probably wondering if our accommodations would be nice and kid-friendly, but all three boys were locked into the Curious George movie on the portable DVD when a big buck and four smaller deer suddenly appeared in our headlights just off the side of Old Lighthouse Road, a winding drive that was our final stretch till pulling up to our weekend rental cottage at River Dunes near Oriental.

And the excitement of both the deer and our two hour-ish drive from Wilmington coming to an end was enough to keep the movie on pause when we parked and unloaded by the River Dunes clubhouse. Without being guided by parents to look, the boys on their own noticed the star-studded sky, the brilliance enhanced by the quiet and solitude of our weekend retreat’s location, a point where Broad Creek meets the Neuse River.

The folks at River Dunes, knowing we would be pulling in at night, had left the lights on for us in the Saber Cottage, a two-story, two bedroom guest cottage that would facilitate our next day’s charter trip with Capt. Jennings Rose of North State Guide Service. The Saber Cottage had something for all of us: my wife saw it as quaint and clean, the boys explored every closet and room for future hiding places, and I liked the separate bedroom for Leslie and I, complete with a screened in porch for the-boys-are-finally-asleep-so-let’s-have-a-cocktail.

Instead of an early morning half day fishing trip with Jennings, we had opted for the afternoon time slot, and on the back porch, the boys tucked in, Leslie and I hoped they would sleep in, but we knew too well that the wish was in vain. Their natural alarm clocks go off at 7:00 am no matter how late they stay up the night before.

Jennings met us at 2:00 pm at one of the big floating docks of River Dunes Marina, located across the street from our cottage. Everyone was introduced, the gear bags and day coolers were stowed away, and then we were off to find some red drum despite the 15 mph winds (gusts to 20) coming out of the east. Jennings’ first spot was a small island point in the Pamlico Sound with a bank facing directly into the easterly wind.

“On an easterly wind you typically want to fish a bank where the water is mixing. You’ve got bait fish and small crabs that are being washed across that point and along that shoreline, and you look for what the red drum are going to target,” Jennings explained to me.

The conditions had been present, but the only reds cooperating this day were underslot, so we picked up and headed to spot #2. Our second location was also a grassy shoreline facing directly into the east wind. This one, located in the mouth of the Neuse River, had some deeper water leading up to the bank, but what had really sold Jennings on dropping anchor were the schools of baitfish moving down the bank.

Bait fishing for red drum, I believe, is ideal for the short of patience and the concentration-challenged, whether kids or adults. Jennings put out four rods behind the boat, all with cut mullet, and he cast close to the shoreline before dropping each rod in a rod holder. The boys were curious (mildly) to watch him set up rigs and bait hooks, but soon gummies and sports drinks were starting to win out and they migrated to the front of the boat to snack and drink and then snack some more.

I don’t want to underestimate when it comes to candy, but the boys couldn’t have eaten too many gummies before the first fish bit and Jennings called out for one of them to grab the bent rod out of his hands. Owen outraced James to the back of the boat and suddenly found himself taut to a fish that was pulling harder than any fish he had ever fought.

Owen made the mistakes of many of us when we are learning to fish. He tried to reel in the fish too fast, not thinking, only rushing. He was holding on to the reel with a white knuckle grip, clumsily forcing the handle around. The rod tip dipped too low numerous times, and the line went slack on a couple of occasions, but Jennings’ circle hook rig did its job wonderfully and the fish stayed connected.

Owen’s fish had showed itself, before seeing the boat and taking a strong run away, to be an over-slot red drum. His red drum continued this pattern, going on runs when Owen had finally managed to get it close to the boat, and then running again when it saw Jennings’ outstretched arm with a landing net headed its direction.

Ultimately, though, Owen led his fish into the net, even successfully listening to Jennings’ advice when the fish was boatside to lift up the rod tip and take a couple of steps backward away from the side of the boat. Owen’s smile was proud and sincere, as were the genuine celebrations that erupted from Leslie, James, Jennings, and me.

The 30” red drum was a big deal, for sure, but so was the ladder the boys had discovered on the front of the Contender’s console that we were fishing on that day. So the fish was quickly forgotten, the boys returned to whatever ladder game they had created prior to the hookup, and Jennings cast the line back out with fresh bait. He started to refresh the bait on a starboard rod, but was interrupted by the sound of drag coming from port.

This one was James’ fish, and he too seemed to be caught off guard when first feeling the strength of the red drum he was being asked to bring in. James is two years younger and several inches shorter than Owen, and at first had trouble just getting comfortable with the rod, placing the butt of the rod first under his armpit, and then wedged into his waist area, and then back again under his armpit.

James, like his brother, was white knuckled, reeling nonstop as fast and as hard as he could, whether or not he was gaining line or losing it. He was clearly tense, having trouble remembering to breathe and quickly showing signs of arm muscle fatigue and hand cramping, so when he suddenly broke down with watery eyes I was there to relieve him of the rod and Leslie was there, as moms always are, to hug and console.

James had fought the fish to within 5-10 yards of the boat before giving in, so Owen only had a quick battle before he boated his second over-slot red drum of the day, proud once again over the accomplishment. This, of course, sent James into round two—he was no longer tired or frustrated but upset now that Owen had caught his fish.

Before Leslie could talk him through this new wave of emotions, another rod bent over and James was asked if he wanted to try again. He did, and this time he fell into better form. His knees were in a good position against the side of the boat. The rod seemed more comfortable under his arm. He breathed more, relaxed more, didn’t reel when the fish pulled out line, and then reeled hard when the fish gave him line.

James’ fish boiled several times, tail splashes broke the water’s surface on numerous occasions, and we often saw silver flashes through the tannin-colored water. All was good again with our 7-year-old when he brought the fish into Jennings’ waiting net.

Our boys fought several more reds that afternoon (and polished off the two boxes of gummies), so with the sun starting to set on the horizon Jennings brought us into Broad Creek and back to the docks. The River Dunes clubhouse, I’m sure, would’ve have been an excellent dinner to cap off the day, but the kids were tired so we worried on how well they would behave in any dining room setting and decided ordering a couple of Silo’s pizzas to go would be a safer bet.

On our second night, instead of the back porch we opted for the gas-lit firepit in the center of our U-shaped cottage walkway, and once again we wondered (hope springs eternal) if this time our kids would somehow sleep in past 7:00 the next morning.

Capt. Jennings Rose, of North State Guide Service out of the Oriental area, runs guided fishing trips through the spring, summer, and fall. He works in close partnership with Capt. Greg Voliva, of Four Seasons Guide Service, as the two of them both know the area waters well, are family-oriented, and enjoy working with kids (both of them do fishing trips with Oriental’s popular summer camps).

And for accommodations that offer natural beauty, convenience, and charm for a family fishing vacation, please visit www.RiverDunes.com or call (800) 975-9565.