Matt, of Chasin’ Tails Outdoors, reports that the red drum bite has been great, with shrimp, mullet, and mud minnows all producing, though Gulps fished on the bottom will do in a pinch. The point at Cape Lookout, Shark Island, the Coast Guard Station, the backwaters of Core Creek, and the Beaufort High Rise Bridge are all good places to look, and it hasn’t been uncommon to pull in a slot fish in the 8 lb. range.
Black drum have been making a good showing as well, especially around ICW docks. Live shrimp and bait shrimp have been the best baits.
Speckled trout fishing has picked up, with plenty of 2-3 lb. fish available.
Flounder fishing has been great, with normal fall numbers starting to come in. Fish up to 11 lbs. have been found around the Port area and near the bridges, rocks, and docks in the inside waters. Live minnows have been the best baits inshore, but there have also been plenty of fish caught on ARs 315, 320, and 285 by anglers using 2 oz. bucktails tipped with 4” Gulp shrimp.
Spots are here and biting, with 50 fish days not out of the realm of possibility. Bloodworms, Fishbites, and bait shrimp have all been producing.
Surf anglers have been taking advantage of one of the best red drum bites in a while, especially from the Oceanana Pier up to the Fort Macon area. Cut and live mullet on drum rigs will bring fish to shore.
Blues have been found in decent numbers, along with a few spanish. Look for both during higher tide stages.
Off the beach, false albacore have been thick over the last two weeks, especially around the Cape and Beaufort Inlet areas. Look for busting fish or birds working the water, and you’re almost guaranteed to find the albies underneath. Heavy Glass Minnow jigs are hard to beat, and Spanish Candies do a fantastic job as well. There are still plenty of big bluefish around, and they’ll be in the same areas and fall for the same baits.
Spanish and king mackerel fishing off the beach has been hit or miss, but the best areas to look have been around the nearshore ARs and the Northwest Places. For the spanish, typical spoon/planer combos will work, and for the kings, Mac-a-Hoos and cigar minnows on dead bait rigs have been producing.
Farther offshore, the wahoo bite has been on fire. Fish in the 60 lb. range, and some pushing 80 lbs., have been caught, and limits are being met daily. The waters from the Rise to the Swansboro Hole have been the best, where planer rods have been seeing the most action. Medium and select ballyhoo have been working wonders.
Quite a few blue marlin have been caught recently, mostly by anglers targeting wahoo. Dolphin are also making their way south through the Stream, and good numbers of blackfin tuna have been caught, too.

Paul, of Freeman’s Bait & Tackle, reports that speckled trout can be found in the creeks, where grubs will get a bite. Flounder have been found sporadically, but not in any great numbers.
Spot fishing has been productive, especially in the Turning Basin and by the Beaufort Drawbridge. Bloodworms have accounted for most of the fish.
Red and black drum have been swimming in the surf, where mullet will draw attention. False albacore have turned on, and there are plenty of bluefish to be caught as well. When the water is clear, spanish are also willing to bite.
Offshore, there has been a pretty good sailfish bite when the weather allows boats to get out and find them. 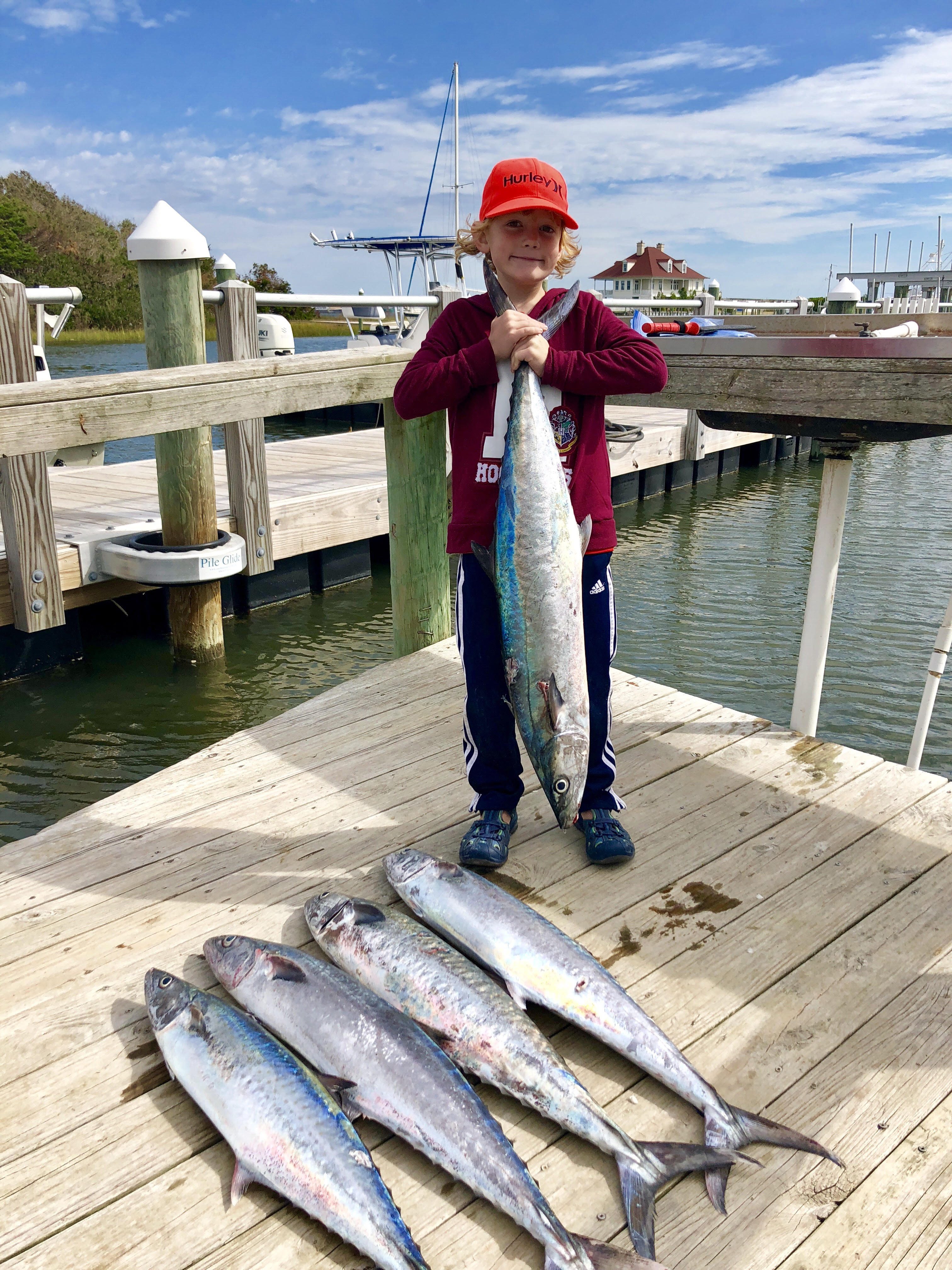 Joey Bunting holding up one of the king mackerel that he caught with his father, Bill, while fishing out of Atlantic Beach.

Chris, of Mount Maker Charters, reports that flounder and reds are biting inshore on live mullet, with the Turning Basin and nearby marshes providing most of the action.
Off the beach, false albacore are biting on the fly and casted metal, with 40-75’ of water seeming to be the sweet spot.
Kings can be found from Beaufort Inlet to the shoals, where live bait will do the most damage. To key in on the big fish, check your favorite 45-90’ nearshore spot either east or west of the shoals.

Dave, of Cape Lookout Charters, reports that inshore fishing is red hot right now. Speckled trout are biting classic green grubs on red jig heads, and there are plenty of red drum in the Newport and North rivers. Top Dogs and She Dogs, along with the MR series, are turning a lot of heads.
Black drum and sheepshead fishing has been highly productive, with shrimp and crabs serving as the best baits.
Drifting for flounder with finger mullet has been good on pretty days.
Trolling for bluefish and false albacore has been great when using Clarkspoons, and casting Stingsilvers has worked as well. Fishing on the high tides in Beaufort and Bardens inlets will get the most attention.
Small kings are hanging on the nearshore reefs, the Dead Tree Hole, and the Sea Buoy. They’re hitting Drone spoons, cigar minnows, and live shad.

Justin, of Breakday Charters, reports that spike-sized speckled trout are thick, but cooler weather should get bigger fish to bite. Holes in the sound, rivers, and marshes along cut banks and structure (particularly with moving water) will produce bites on MR17s and 3-4” soft plastics.
Flounder are biting in the same areas the trout are, in addition to nearshore docks, sea walls, and bridges. Slack water in an area that normally sees fast-moving current is best for the flatties.
Kings are on the beach all along the Crystal Coast. Fish out to 80’ of water and bump troll live bait for big fish. Dead bait and artificials will pull in the schoolie-sized kings, and target inlets, jetties, ledges, and ARs. 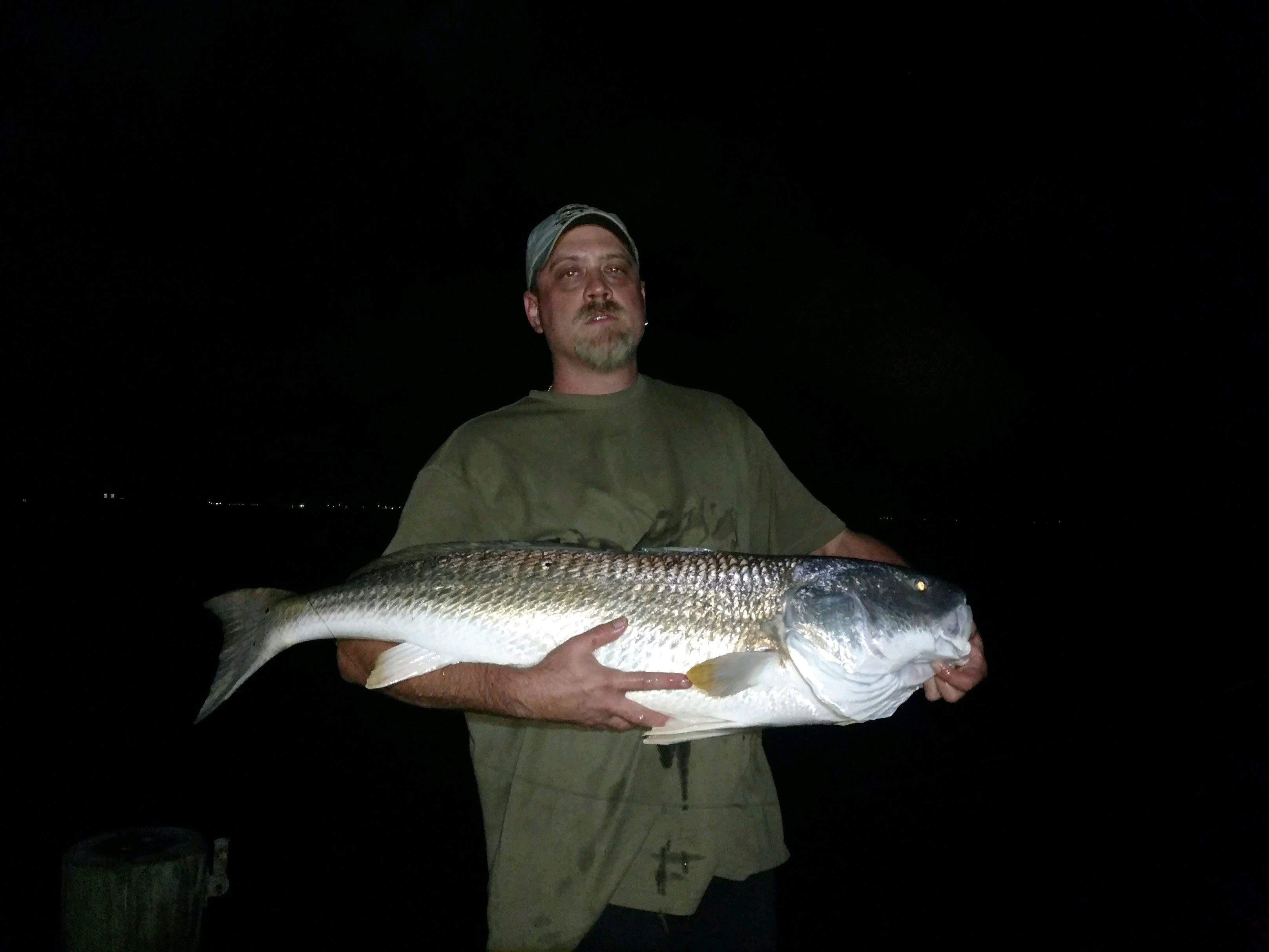 Tom, of Dancin’ Outlaw, reports that there has been a good wahoo and blackfin tuna bite in the 40 fathom range around the Big Rock. Sea Witches and medium ballyhoo are getting the most strikes. There has also been a good sailfish bite in the same area, though anglers should switch to small-necked ballyhoo if they want to target the sails specifically.

Wayne, of Oceanana Pier, reports that anglers have been finding plenty of spanish mackerel and bluefish, and pompano have been eager to bite as well. Gotcha plugs have worked for the spanish and blues, while the pompano (mostly just under the 2 lb. range) have been falling for shrimp, squid, plugs, and bloodworms.
Small spots are being caught on dirty red-colored Fishbites as well.