Mike, of Native Son, reports that the main story over the past few weeks has been speckled trout. There are definitely a lot of bigger fish around, but expect to wade through a bunch of shorts to find them. Still, the smaller fish are a lot of fun to catch, just remember to handle them carefully and release them quickly to keep the population healthy and big for next year.
The best way to catch a big trout is to remember that trout tend to feed looking up, so match your lures and weights to the weather and water conditions that you’re fishing in to keep your luers/baits higher in the water column. In the morning, the specks can be fooled with topwater baits, especially Top Pups, She Dogs, and Skitterwalks. The higher pitch of the She Dog has proven to be the most effective on windier days. Throughout the day in higher current areas, MirrOlure MR-18s and Z-Man MinnowZ on 3/16-1/4 oz. lead heads have been producing bites, while MR-17s and 1/8 oz. jig heads are working better in shallower, slower-moving water.
Though speckled trout have been the primary target recently, there are still a lot of red drum and flounder around. Expect to pick some up while going after the trout, and switch to live bait around the usual hangouts for red drum and flounder if you’d like to target them specifically.

Chadwick, of South End Anglers, reports that speckled trout fishing has been fantastic around Topsail Island, with a plethora of fish scattered all throughout the marsh. Find a spot with tidal movement and 5’+ of water, and there’s a good chance that a few specks will be in it. You will go through a lot of throwbacks, and odds are high that if your first fish in a spot is 13”, that’s all you’re going to find there. Move around and cover more water to catch bigger fish.
The trout are falling for a myriad of baits, with MirrOlure MR-17s or 18s and Z-Man Trout Tricks, MinnowZ, and StreakZ on Fathom Inshore jig heads getting the most attention.
There are still a few flounder and red drum swimming around the marsh, but most of the fish have been undersized. Bett’s Halo Shad fished along the bottom with a slow retrieve has been producing bites.
Big red drum have been holding on nearshore structure. Cut bait on the bottom or Z-Man HeroZ on TT jig heads will get them to bite. Keeper flounder can also be found on ledges just off the beach. 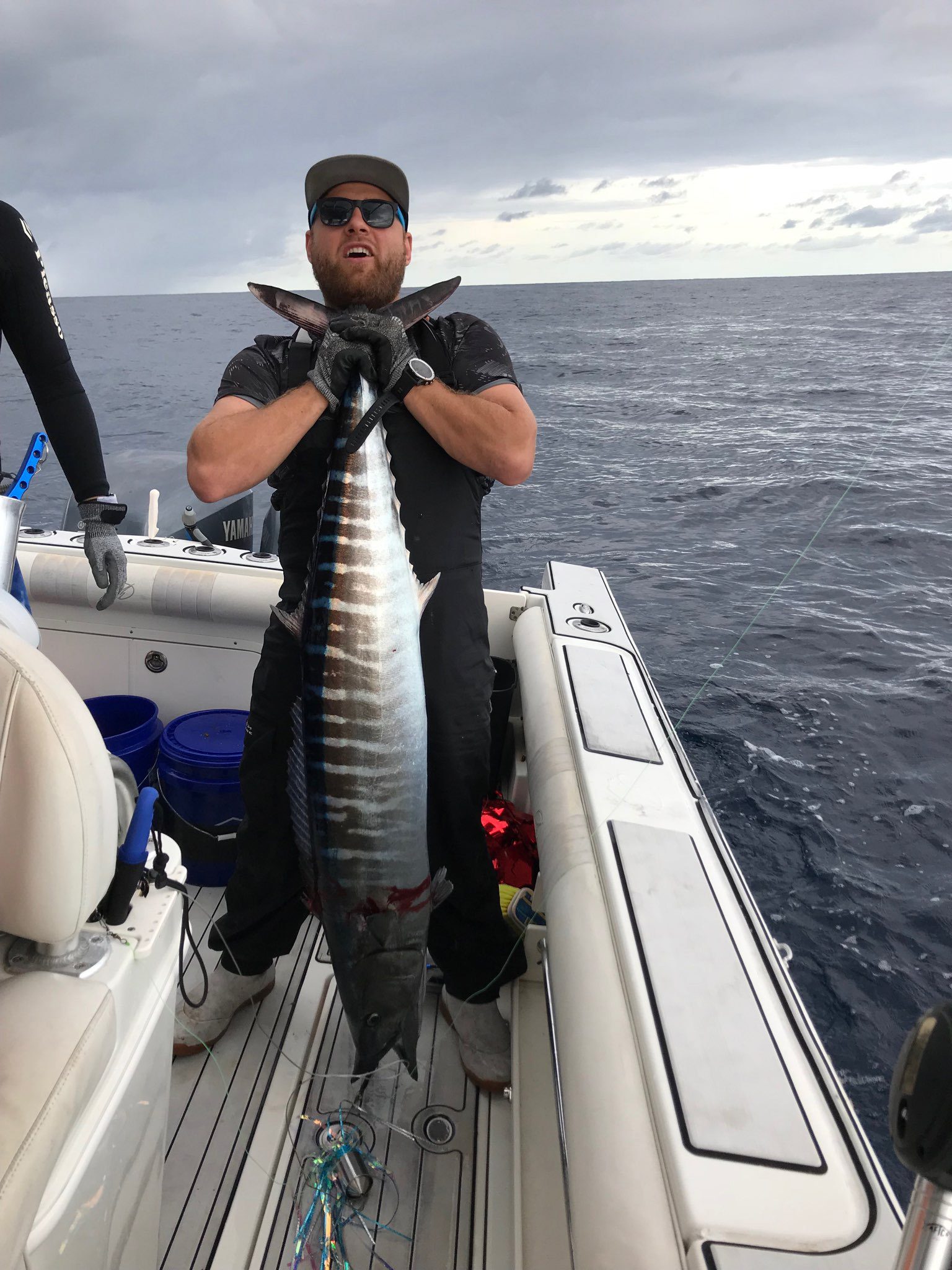 David Kish showing off a 40 lb. wahoo that fell for a Big Nic 32 oz. Dinner Bell. He was fishing just north of the Same Ole’.

Ray, of Spring Tide Guide Service, reports that the main story in the inlets and the New River has been speckled trout, especially since some big, keeper fish are starting to bite. A good strategy in past years has been to move to a new spot if you keep hooking small fish, but this year the spikes seem to be everywhere, so you’re going to have to wade through them wherever you go.
In the inlets, Bass Assassin grubs (salt and pepper with a green tail, rainbow trout, and chicken on a chain colors) on 1/8-1/4 oz. jig heads have been producing. In the river, MR-17s and anything with some pink in it have been the ticket. If you can find a big school of menhaden, it’s very likely that the trout are around.
Red drum have been mixed in with the specks when fishing along grassy banks.

Marc, of Bad Habit Sportfishing, reports that fall fishing is in full swing, with red drum, trout, and flounder all being caught both inshore and nearshore.
King mackerel can be found just about anywhere from the beach to the break, or nowhere at all, depending on the day. When they are biting, they prefer live pogies, bluefish, jigged bait, and dead bait as well.
The bottom bite has been consistent with grouper, snapper, sea bass, grunts, triggerfish, and more all coming up from the depths. They are eating squid, sardines, and northern mackerel.
The Gulf Stream is producing wahoo, tuna, sailfish, and a few mahi. Trolling ballyhoo behind your favorite Eye Catcher lure or Yo-Zuri plug will get their attention. 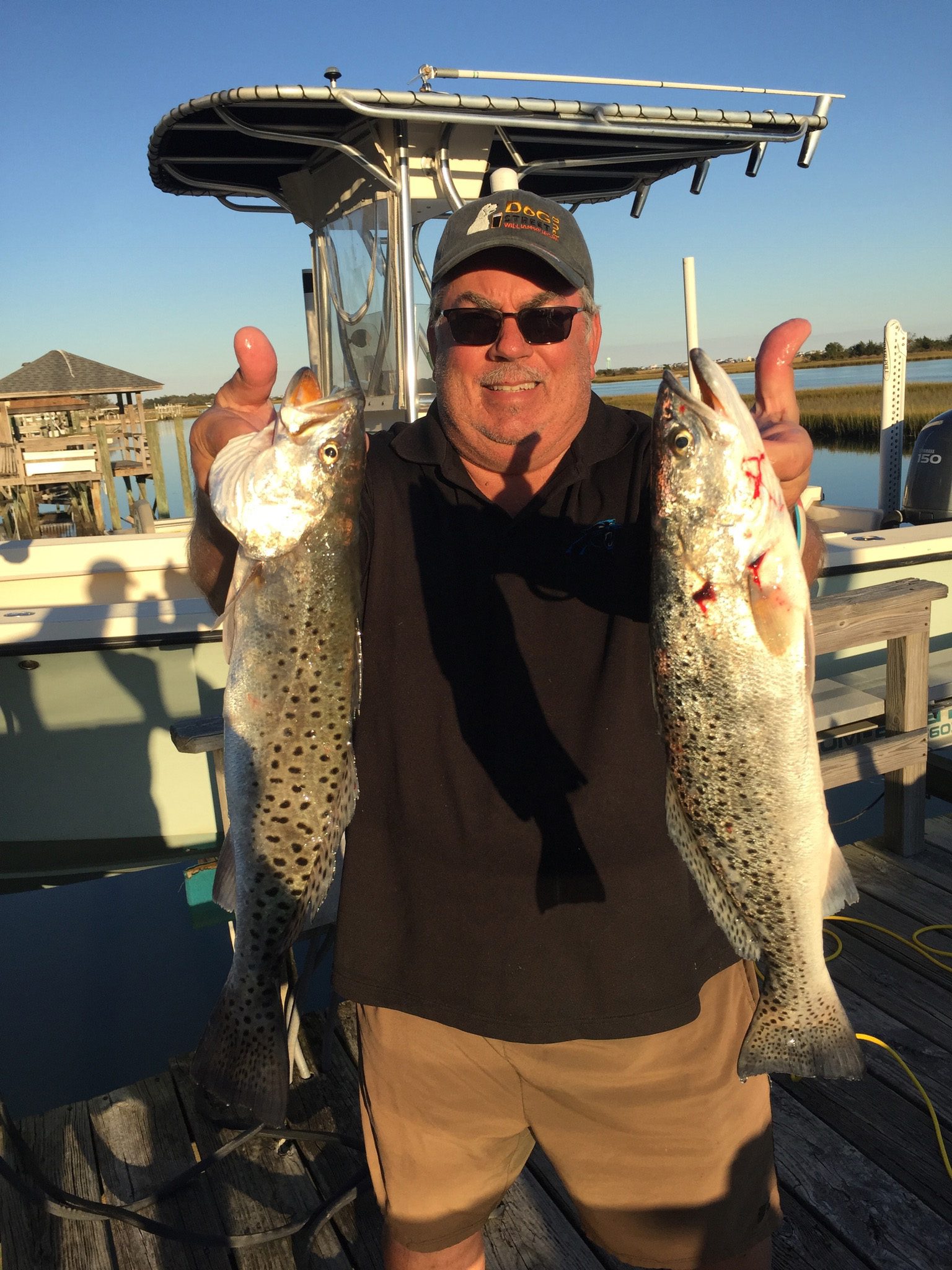 Dale Felton, of Taylorsville, NC, with a pair of trout he landed in New Topsail Inlet while throwing Gulp baits.

Jim, of Plan 9 Charters, reports that speckled trout fishing has been fantastic, with a few keepers intermingled with a lot of smaller fish. Big red drum are coming from the nearshore reefs and ledges, and both jigs and cut bait fished on the bottom have been bringing the reds up.
Fishing in depths of 70-100’ of water has produced a mixed bag of sea bass, gray snapper, porgies, and grouper, with cut bait accounting for most of the action.

Tyler, of Seaview Fishing Pier, reports that quite a few mullet and spots have been running recently, with bloodworms and shrimp serving as the best baits. The colder weather has really done wonders for the bite.

Chris, of Surf City Pier, reports that a few mullet and a handful of spots have come in, with black drum and slot reds being caught as well. In addition, the pier’s also been seeing the occasional flounder. The bite has been unpredictable over all, but bloodworms and shrimp have been the most reliable baits.

Brandi, of Jolly Roger Pier, reports that anglers have been catching a mixed bag of fish. Pompano, puppy drum, over-slot drum (from 34-46”), bluefish, mullet, spots, and trout (both spikes and keepers) have all been coming in. Bloodworms are working for the spots and mullet, and putting the spot head on a circle hook and sending it back down has a good chance of bringing up a big red.
When the water is choppy and muddy, the drum are seemingly more active, and on a particularly cold day, you can expect the trout to be biting.