Chadwick, of South End Anglers, reports that slot red drum can be found around marsh docks, grass points, oyster rocks, and dead end bays, while over-slot fish are in the usual nearshore places. Fathom Inshore jigs and popping corks/plastics, Rapala Skitterwalks, and Z-Man JerkshadZ will all work on the artificial side, while finger mullet under floats or on Carolina rigs will work if you prefer live bait.

Flounder are scattered throughout the marsh, particularly around creek mouths, docks, and deeper channels. Carolina-rigged live finger mullet, Fathom Inshore jigs, and Z-Man soft plastics have all been getting bites.

Speckled trout are starting to trickle in. MirrOlure MR17s, 18s, and 52 Trout Tricks are all getting the job done, as are Z-Man MinnowZ, Fathom jigs, and Rapala X-Raps and Skitterwalks.

False albacore can be found outside, where Hogy Epoxy Jigs and sparsely tied Jigfish Fly Rod Surf Candies will generate some action.

The king mackerel bite is heating up closer to the beach. Dead cigar minnows, live menhaden, and Rapala mag divers are all producing.

On the nearshore bottom, sea bass, grunts, grouper, rings, and amberjacks are all chewing on live bait, squid, metal jigs, and bucktails.

Mike, of Native Son, reports that even though the last couple of weeks have been tough due to Florence and the aftermath, the fishing has been resilient. Right now, the main focus is on the spanish and false albacore that are swimming just off the beach. As always, looking for the birds above the surface should help you key in on the fish below. 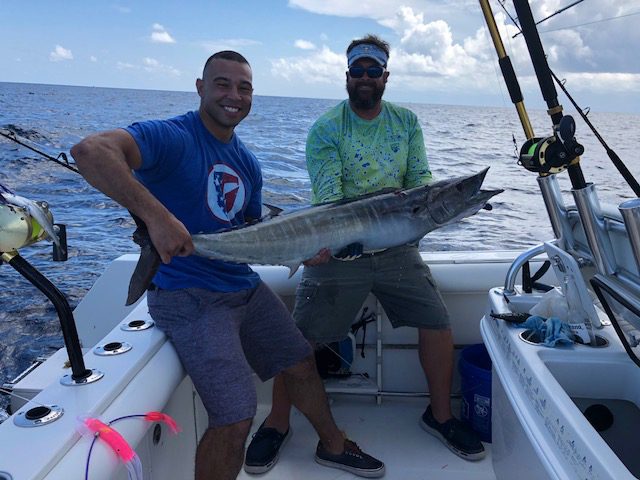 Ryan Harris and John Tedder with a 43 lb. wahoo that was caught on a feather behind a Flippy Floppy while fishing out of New River Inlet.

Ray, of Spring Tide Guide Service, reports that after Hurricane Florence, the water behind Topsail Island is nasty, and there is very little bait and very few fish swimming in it. If you stick close to the inlets, though, you’ll find that an inshore slam is not out of the realm of possibility on any given day.

While trout are the most sporadic of the three species, they’re definitely trickling in, and multiple trips have resulted in solid 2-3 lb. fish. The key to locating a nice speck is to find a point that has an eddy and throw your bait (Storm and Vudu shrimp are working the best) on the swift current side to let it sweep in. The fish will be hanging on the edges and will readily attack the artificial.

There’s no big secret to catching the flounder in the area. Gulp shrimp and Carolina-rigged live mullet fished on the bottom are still putting flatties in the boat, and though a lot of the fish have been throwbacks, there’s usually two or three 17-18” keepers mixed in.

The red drum in the inlets are moving in sizeable schools, and whether you’re looking to fight a bull or put a keeper in the box, you can find either one, as the reds have varied from 18-32”. Most of them are falling for Gulp shrimp, electric chicken MR-17s, and butt naked Saltwater Assassins.

Outside the inlets, anglers can look forward to false albacore, which should be picking up very soon.

Marc, of Bad Habit Sportfishing, reports that some bull drum are biting nearshore, and kings are scattered from the beach to the break.

Bottom fishing has been hit or miss, with a mixed bag of fish coming over the gunnel. Grouper have slowed down since the storm, but they should pick back up well before the season closes.

The Gulf Stream is holding wahoo, tuna, and sailfish.

Ashley VanVakoven with her first Red Drum, a 25 inch fish that fell for a chunk of cut mullet near Surf City while fishing with her boyfriend, Jake.

Jim, of Plan 9 Charters, reports that king mackerel are in the 10-12 mile range, with dead cigar minnows on dead bait rigs bringing the most fish in. Big spanish mackerel and false albacore have also been in the mix.

On the bottom (between 60-80’), both sea bass and grunts have been showing up in strong numbers. Expect the grouper bite to pick up soon.

Garrison, of Surf City Pier, reports that fishing has overall been pretty slow in the first week of the pier’s re-opening after Florence. Quite a few red drum were biting earlier in the week, and there have been a few spots here and there, as well as some small black drum.

Nick, of Jolly Roger Pier, reports that the pier is open and fishing is good, with a lot of pompano, speckled trout, and small flounder being caught. Bluefish are biting in the morning, and there have been a few decent spot runs recently, mostly at night.