Mike, of Native Son, reports that inshore fishing has returned to pre-storm conditions, if not better. Red drum are returning to the creeks to feed on mullet, and they can be found on grass points and oyster bars. Live bait is plentiful, but if you prefer topwaters or soft plastics, both are working.
The main story over the past couple of weeks has been speckled trout. The past-winter fish kill seems to have had no major effect on the overall population, as there are plenty of trout still around. Most of them have been just short of keeper-sized, but bigger fish have been mixed in; you just have to wade through the throwbacks to find them. Bigger baits work better, and it’s important to find a current seam or point that provides shelter from the main current. Key in on the presence of bait, and if you don’t get a strike after 15-20 minutes, move on to the next spot. If you don’t find fish on an incoming tide, check back later on the outgoing tide to see if the action improves.
If and when the wind cooperates, fishing off the beach has been highly productive. False albacore are massing up about 7+ miles out, though you may be able to find the occasional bite closer in. Spanish have been on the beach during an outgoing tide.

Chadwick, of South End Anglers, reports that old drum can be found on nearshore structure, while slot red drum are scattered, with most of the action coming from grass points, oyster rocks, and dead-end bays. For bait, on the artificial side, Fathom popping corks, jigs, and soft plastics are working well, as are Z-Man JerkshadZ and Rapala Skitterwalks. For anglers who prefer live bait, use finger mullet under floats or on Carolina rigs.
Flounder have been scattered in the marsh as well. Creek mouths, docks, and deeper channels are a good place to start, where Carolina-rigged live finger mullet, Fathom Inshore jigs, and Z-Man soft plastics are all getting attention.
Speckled trout have been around in good numbers, though there has been quite a few throwbacks mixed in with the keepers. Expect that to improve with the upcoming cold front. MirrOlure MR17s, 18s, and 52s have all been working well, as have Trout Tricks, Z-Man MinnowZ, and Fathom jigs. For topwater action, use Rapala X-Raps or Skitterwalks. The best place to look for the specks has been near grass points with good current, around bridges, and in boat basins.
Off the beach, false albacore are striking Hogy Epoxy jigs and Heavy Minnows. Sparsely-tied Surf Candies and Clousers will produce as well. 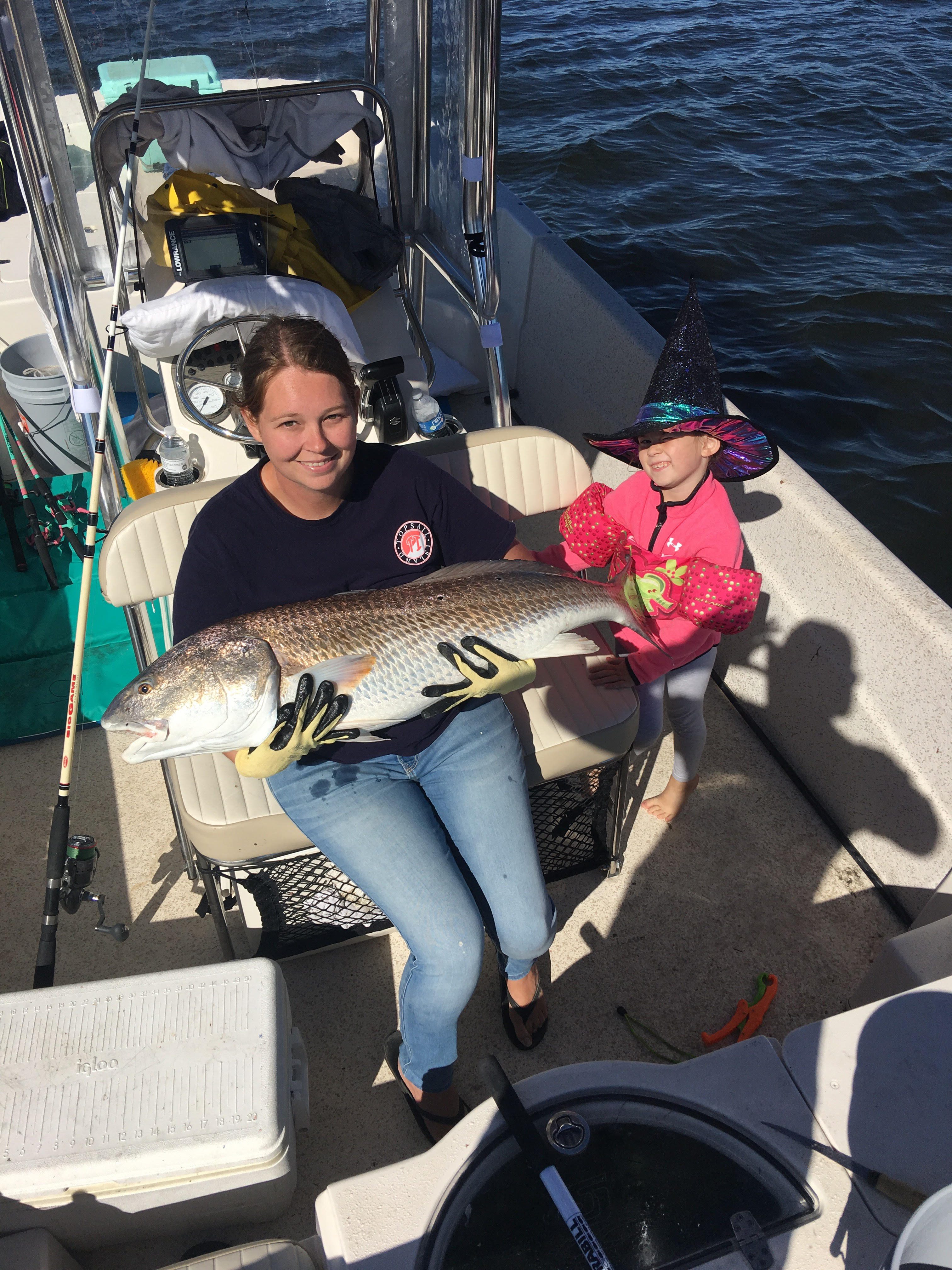 Charli Hall, of Sanford, NC, with a 43″ red drum caught on a live finger mullet at the North Topsail Bridge.

Ray, of Spring Tide Guide Service, reports that speckled trout have been the main target over the last few weeks, and the occasional puppy drum has been mixed in. Sticking to the creeks leading into the inlets has been the best bet, especially on the falling tide.
Artificials have been getting the most attention, especially MR17s in electric chicken and pink bottom colors, as well as Saltwater Assassins in watermelon and white/green paired with a Blue Water Candy jig head and weighted just enough to touch the bottom (the faster the current, the heavier the weight). These baits should find plenty of 13-15” specks, though some days are producing more fish in the 18-20” range. It’s not uncommon to find 30-40 trout at a time, and when the cold front comes through, all numbers should increase.

Marc, of Bad Habit Sportfishing, reports that fishing is getting better closer to shore. Drum and trout, in addition to the occasional spanish and blue, are biting jigs, spoons, and cut bait. There has also been a scattered presence of kings and tarpon biting pogies and bluefish.
The bottom bite has improved over the last week or so. The best action for snapper, grouper, and the other usual bottom species has been from 85’ out to the break.
Wahoo, sailfish, and tuna are being caught in the Stream. Trolled ballyhoo behind your favorite Eye Catcher lure will do the trick.

Jim, of Plan 9 Charters, reports that the drum bite has been on fire in the inlets and just off the beaches, with cut bait, live bait, and jigs all working to find fish.
The flounder action has been great on the nearshore reefs and hard bottom areas, with some nice sea bass mixed in from time to time. Gulp shrimp combined with bucktails are still getting the nod.
Kings have been spotty in the 10-20 mile range. When the weather cools and the water clears up a little more, that bite should improve. Dead cigar minnows slow trolled on dead bait rigs have been working the best. False albacore, spanish mackerel, and amberjacks have all been mixed in with the kings that are being caught.

Tyler, of Seaview Fishing Pier, reports that the pier is finally open for fishing again, and in the first day, coolers were full with pompano.

Red, of Surf City Pier, reports that the only fish their pier anglers haven’t landed has been a king mackerel, and even those have been seen chasing bait.
Spanish up to 22”, blues, small speckled trout, hand-sized (and the occasional double hand-sized) pompano, 6-8” spots, croakers, sea mullet, black drum, red drum, and a couple of sheepshead have all been caught consistently over the past two weeks.

Brandy, of Jolly Roger Pier, reports that a lot of both over-slot and puppy drum have been coming in.
Good-sized spots are making runs and can be caught 2-3 at a time, and a lot of pompano have started coming up over the last few days.
Spanish have been hit or miss, while bluefish have been a little more consistent.
Speckled trout and flounder are both being caught, but the majority of the fish have been small, with only a few keepers mixed in.