Matt, of Tex’s Tackle, reports that the speckled trout bite has been good over the past few weeks. There have been more fish in the surf and inlets, and over the next few months, the trout will have moved into the basins and creeks to chase bait. Suspending lures and light fluorocarbon leaders is the best tactic for winter trout.
Red and black drum spend most of their time schooled up around docks through the winter, as well as on the flats and over shallow oyster bars on warmer days. Gulp shrimp, fresh shrimp, and cut mullet should generate action.
Surf fishing is producing Virginia mullet, black drum, trout, and a few pompano on live sand fleas and shrimp. Small flounder and blues will be biting through December, and red drum can be found on the shoals around the inlets throughout the winter.
Nearshore structure is holding 3-4 lb. gray trout and the occasional flounder, though most of the flatties move 10-20 miles offshore in the winter. That same range will hold grouper and sea bass in the cold months, and they can be fooled with vertical jigs.
King mackerel fishing has been productive in the 15+ mile range. The fish will continue to push offshore over the next few months and will likely settle in the 40 mile range before pushing back inshore in the spring. Trolling around ledges with Drone spoons and/or live bait will draw strikes, as will frozen cigar minnows on the downrigger or a planer.
Fishing in the Gulf Stream has been great for wahoo (with fish over 70 lbs. in the mix), sailfish, and the occasional blackfin, and it should remain that way throughout the winter. Also expect bottom fishing to remain consistent for amberjack, African pompano, grouper, triggerfish, and beeliners. 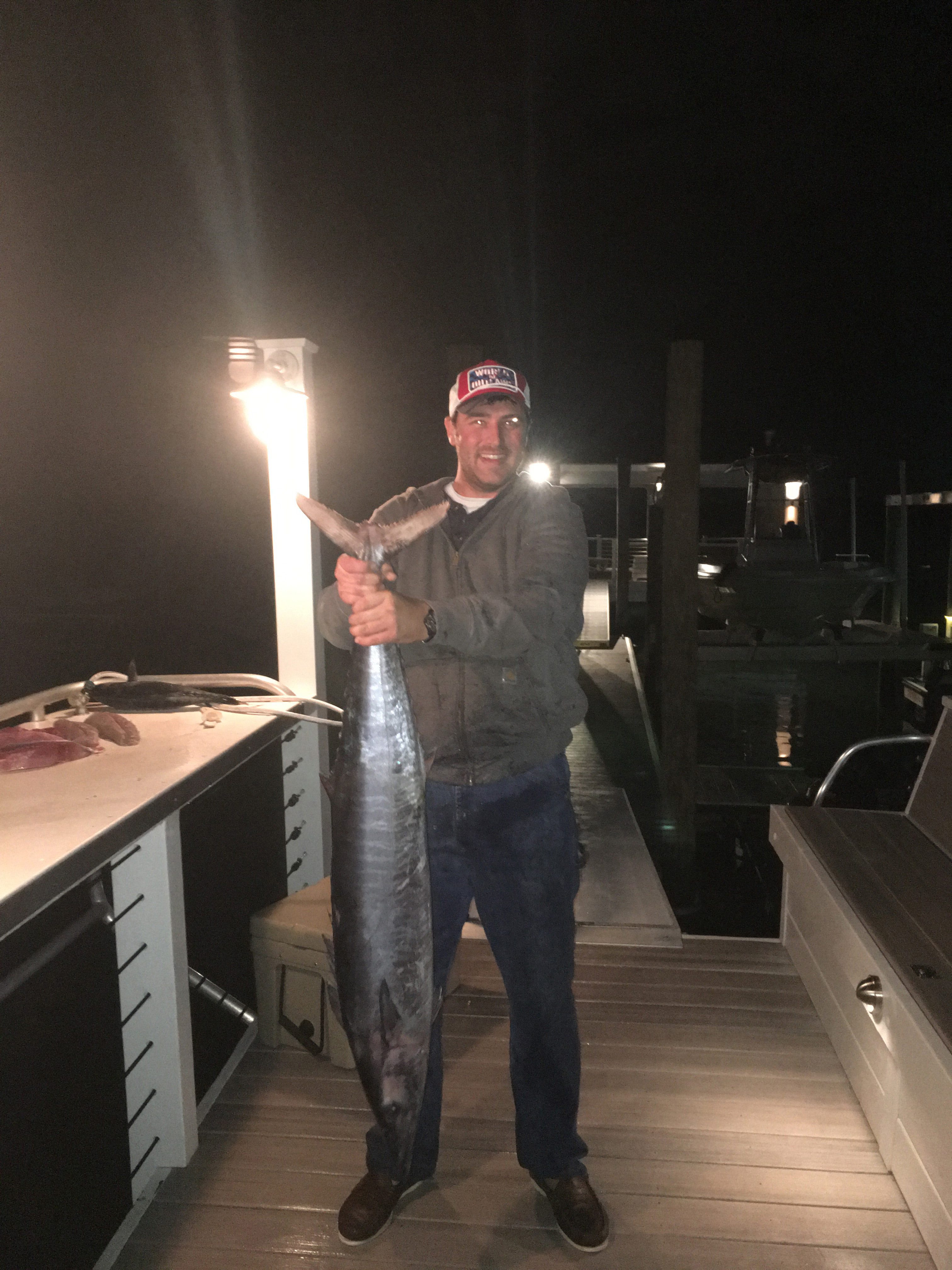 Aaron Rothrock, of East Bend, NC, with a 35 lb. wahoo that struck a ballyhoo being trolled behind a Blue Water Candy Mini Jag in 145′ of water approximately 50 miles off of Wrightsville Beach.

Arlen, of Intracoastal Angler, reports that inshore anglers are finding lots of smaller trout, though bigger fish are starting to become more common. Deeper coves and boat basins have produced fish up to 5 lbs., with 4” DOA shrimp and Glass Ghost-colored X-Raps accounting for most of the bites. Live shrimp below popping corks have also been productive.Throughout the winter months, look for the bigger specks to stage in deeper boat basins and coves where the current is minimal, as well as along the deeper sections of the jetties. Downsizing baits in the colder water and fishing very slowly is often the key to success, and adding scents such as Pro-Cure is very beneficial.Red and black drum have started taking to their normal winter patterns, and they are congregating around deeper docks and bulkheads along the ICW. Both live and dead shrimp fished on the bottom have produced black drum up to 6 lbs., along with plenty of redfish. This action should stay consistent throughout the winter.
There are still a lot of flounder in the creeks, though most of them are small. Keepers have been closer in proximity to the inlets and around nearshore structure. Live minnows and shrimp have been the best baits.

In the surf, large sea mullet and trout have been coming from the deeper holes along the south end of Wrightsville. Sand fleas have accounted for most of the mullet, while MirrOlures and swim baits are better for the specks. Throughout the winter, sea mullet and puffers will continue to bite shrimp and Fishbites, usually until the water temperature reaches the lower 50s.
Gag grouper and sea bass fishing has been good in the 20 mile range, with cigar minnows and sardines serving as the baits of choice. Colder water temps will bring larger sea bass and tautog closer to the beach, where squid and crabs can produce both in 50-60’ and along structure.
King mackerel and false albacore fishing has been great in the 25-30 mile range, where trolling Drone spoons, diving plugs, and cigar minnows on dead bait rigs are bringing in fish up to 20 lbs. In the coming months, king mackerel can be caught as they move offshore along with the 68-70 degree waters, and they are typically caught around Frying Pan Tower.
Gulf Stream fishing is finally heating up, with good catches of wahoo and sailfish being reported. Most of the action has been from the Same Ole to the north, primarily in 150-180’ of water. Trolling skirted ballyhoo with darker Ilanders and Sea Witches is your best bet, though some nice wahoo have been falling for Yo-Zuri Bonita lures and DTX Minnows. Larger blackfin tuna are also being caught both on the troll and by jigging, with the Steeples holding the most fish. This winter, expect wahoo action to stay hot. 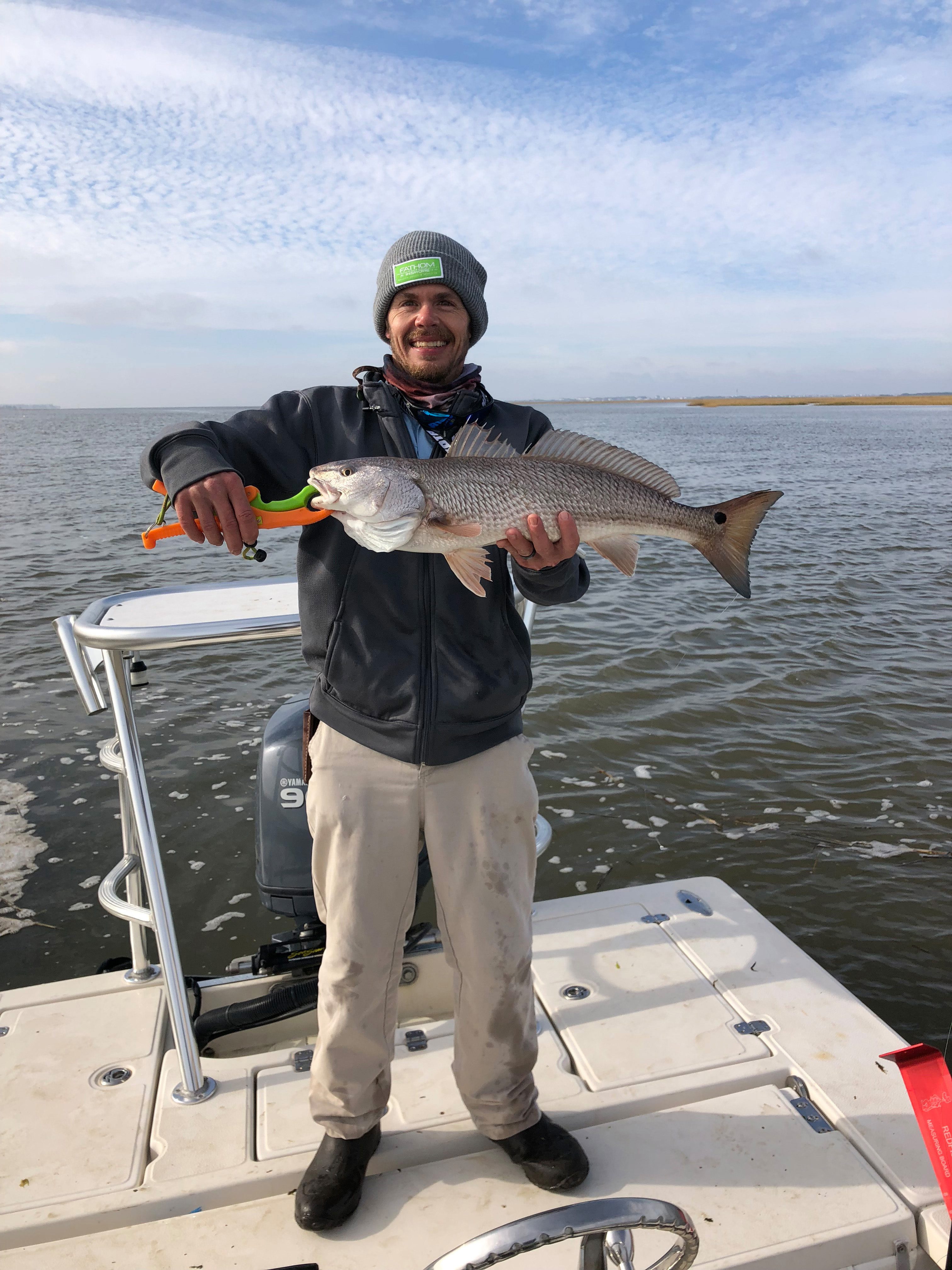 Chris Swan showing off a redfish he landed while fishing in the lower Cape Fear River.

Trevor, of ProFishNC Charters, reports that the water has cooled down significantly and speckled trout, sheepshead, black drum, and redfish are all feeding heavily in preparation for the winter.
During the first month of winter, the black drum get very active around docks in backwater creeks and along the ICW. Using fresh cut shrimp on a Carolina rig is a sure-fire way to get a bite. The reds will be in the same areas, where mud minnows will draw strikes, though cut shrimp works better on colder days when the fish are more lethargic.
Speckled trout are currently feeding on shrimp and minnows under popping corks. Slow moving artificials in fast-moving current will usually work for the specks, especially when paired with scents such as Pro-Cure.
Nearshore bottom fishing is excellent within 10 miles of the beach all throughout the winter and into mid-March. It’s easy to limit out on black sea bass and silver snapper through mid-January, and when the water temperature hits 53-54 degrees in late December, the tautog start biting. Targeting them with clams, shrimp, and crabs on nearshore structure, ARs, and rock piles is the best way to get a bite. Tautog are some of the tastiest fish around and only bite in the winter.

Rick, of Living Waters Guide Service, reports that nearshore fishing has slowed down, with some false albacore and bluefish still around from the beach out to 10 miles. Now is the time, though, to look for a bluefin tuna marauding bait on the beach, which they will continue to do throughout the winter.
Bottom fishing is good all over, with scamps, gags, beeliners, triggerfish, grunts, and sea bass all coming in. Expect more sea bass, tautog, and flounder to make a big showing on structure in the 50-80’ range in the winter months.
Offshore fishing has been all about blackfins, wahoo, and sailfish. With the warmer than usual water, a few mahi have still been around, too, but those will become more rare in the coming months.

Devin, of Johnnie Mercers Pier, reports that trout, bluefish, late season flounder, and whiting are all biting, primarily on Gulp baits.
The trout, black drum, and red drum should hopefully stick around through the winter. Anglers can expect to see more whiting over the coming months as well.