Matt, of Tex’s Tackle, reports that speckled trout fishing is starting to get into full swing. There are a lot of small spike trout being caught in the ICW and the creeks near the inlets, with some groups of larger specks mixed in as well. Z-Man and Gulp soft plastics, in addition to MirrOlure and Rapala hard plastics, have been producing on the trout. Pay attention to water color when choosing lure color, and keep in mind that pink, green, and white are almost always at the top of the list.
Fishing for all sizes of red drum has continued to be great near the inlets and at some spots in the ocean. Flounder fishing in the inlets has also started to produce more keepers mixed in with the throwbacks. Drifting with live bait, squid strips, or Gulps has been the best way to put flatties in the boat.
Surf fishing around Wrightsville has been great. Flounder, sea mullet, bluefish, and red/black drum are all being caught on fresh shrimp and mullet, salted clams, and Fishbites. Live finger mullet are especially effective when targeting flounder and reds. Surf anglers should start seeing better catches of spot, pompano, and big sea mullet any day.
Kings are just starting to being caught within sight of the beach, so soon the ledges in the 10 mile range will provide consistent fishing. Spanish mackerel, false albacore, and bluefish have been biting from the beach out to the 5 mile range, and some of the spanish have been over 4 lbs.
Flounder and gray trout fishing has been productive at the nearshore wrecks and ledges.
Fishing is great for wahoo and blackfin tuna this time of year, if you can make it out. Trolling skirted ballyhoo with wire rigs is a proven way to land a ‘hoo, with Blue Water Candy Jags, Sea Witches, and Ilanders all making for a great skirt choice. You’ll want to use a planer or trolling weight on one line, or use a lure like a Mann’s Stretch 30 or Yo-Zuri Bonito to get further below the surface.
The blackfins will occasionally eat a rig intended for a wahoo, but they usually respond better to smaller trolling plugs (like a Cedar Plug or Green Machine). Surface teasers will help raise more of both species.
Bottom fishing and jigging is still good for grouper, amberjack, snapper, and triggerfish. 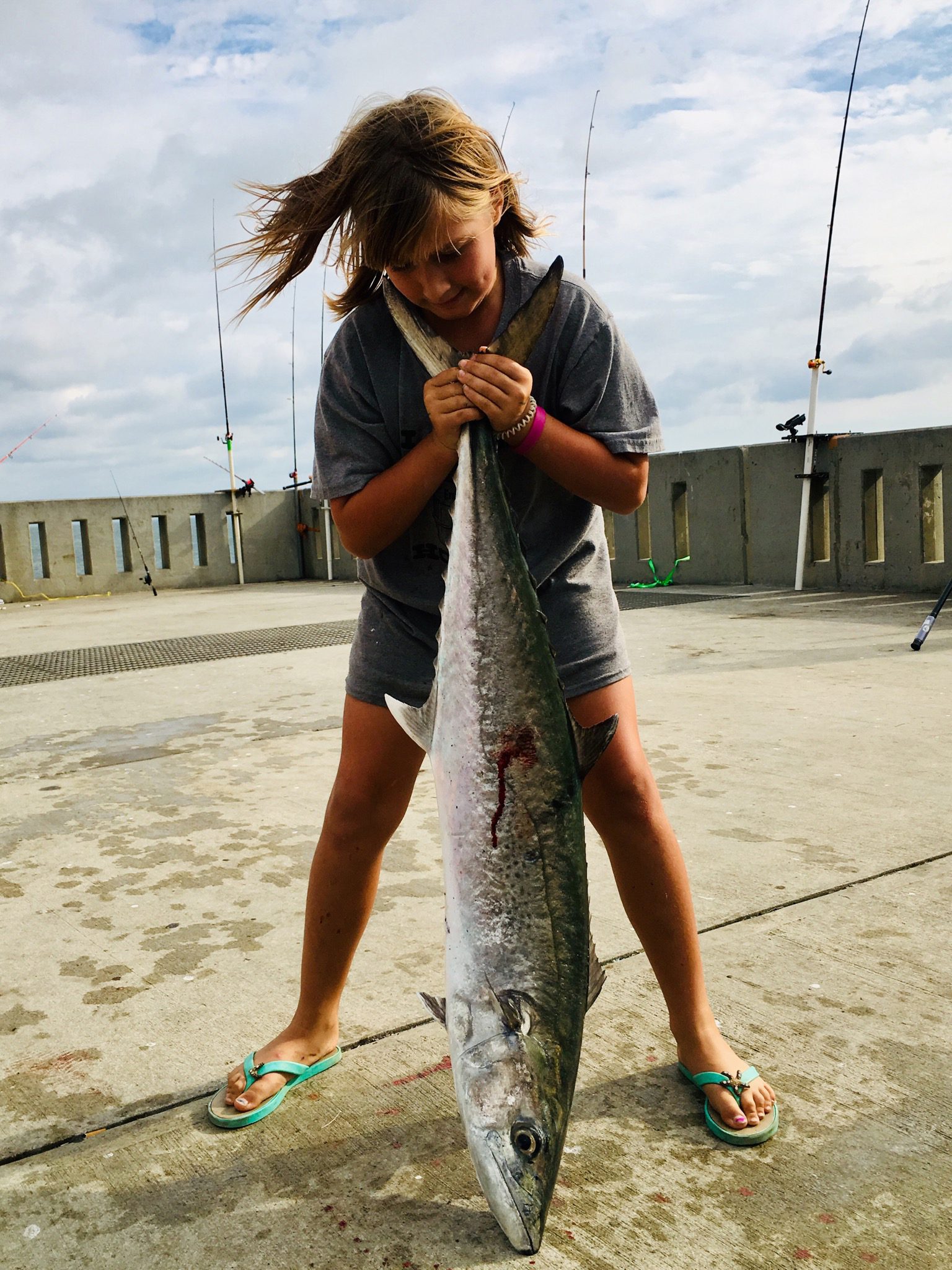 Whitney Clark, age 9, with a 20lb king mackerel that ate a live bluefish while she was fishing on Johnny Mercer’s Pier.

Arlen, of Intracoastal Angler, reports that speckled trout fishing has kicked off inshore, and though there are still a lot of small fish around, it’s becoming increasingly common to find keeper fish. Carolina Beach Inlet and the waters behind Rich’s Inlet have been the best places to look, and Super Spooks and DOA shrimp are accounting for most of the big bites.
There are plenty of red drum still around, with slot fish biting topwaters in the creeks, and the bigger fish falling for cut bait in the inlets and around the jetties.
Surf anglers are finding good numbers of slot reds and pompano. Cut mullet works for the drum, while the pompano have been partial to Fishbites and sand fleas.
Off the beach, spanish and false albacore can be caught on the troll or cast. Larger kings will hit live bluefish and menhaden.
Bottom fishing in the 80-90’ range has produced plenty of gag grouper, while the 120’ range is full of good-sized beeliners and triggerfish.
In the Gulf Stream, wahoo fishing has been improving, with fish up to 98 lbs. hitting the scales. The bite isn’t wide open yet, but it’s certainly turning on. There have been some big blackfin tuna and a lot of sailfish around the Steeples.

Jamie, of Seagate Charters, reports that speckled trout fishing has continued to improve over the last few weeks. Anglers getting on the water in the early morning can find a great topwater bite, with X-Caliber Spooks and Rapala Skitterwalks both getting plenty of attention. Later in the day, switching it up to soft plastics from Blue Water Candy, Fathom, and Z-Man will prove effective, and suspended twitch baits from MirrOlure, Rapala, and Yo-Zuri can work as well.
Both the inlets and the waters behind Masonboro Island have been producing red drum, though sizes have still been inconsistent. Using either live or cut bait will generate fish. Live bait will also work for flounder, as will soft plastics.
False albacore are still thick off the beach, where Clarkspoons and planers are getting a lot of attention.

Trevor, of ProFishNC Charters, reports that inshore trout fishing has been decent despite the murky water. Good numbers of keeper-sized specks have been coming from the inlets, with pink Blue Water Candy jig heads combined with green curly tail grubs getting a lot of attention. Using Pro-Cure has made the difference at times.
Flounder fishing has also been productive, as big flatties will be pushing up in the creeks from now until mid-November to breed.
Nearshore trolling has been unproductive, as the post-Florence waters aren’t holding the numbers of king and spanish mackerel that are usually seen this time of year. With that being said, good numbers of spanish have been found feeding in Rich’s Inlet, so the bite should improve soon.
Nearshore bottom fishing out to the 10 mile range has been productive when targeting sea bass, porgies, and flounder on both live bait and jigs.
Red drum fishing at the inlet mouths and nearshore structure has produced some jumbo-sized fish, with the jetties holding most of the massive reds that are migrating south out of the Pamlico and Outer Banks areas. 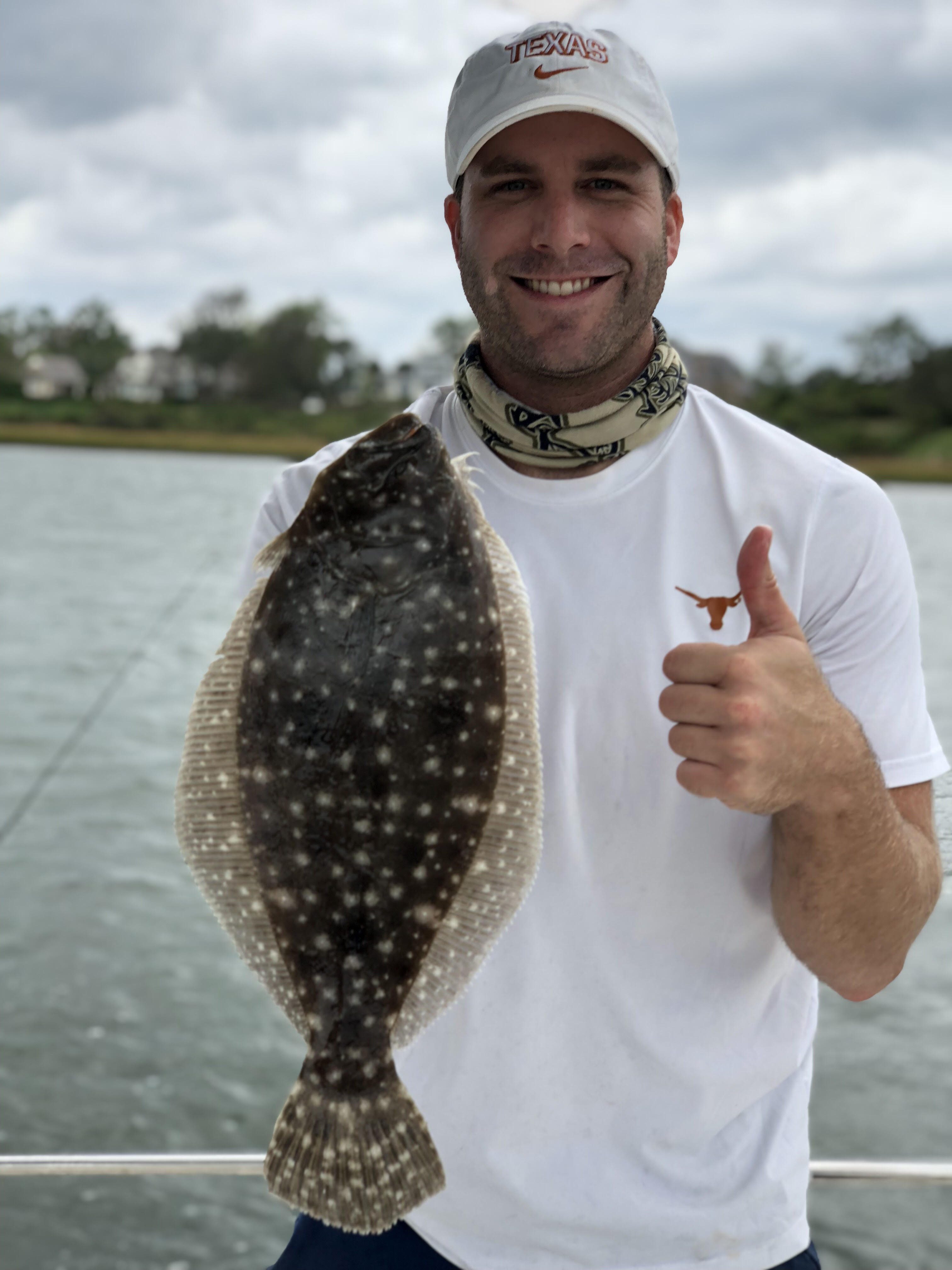 Alex King landed this 17″ flounder while drifting the ICW south of the Wrightsville Beach boat ramp on a Carolina-rigged live finger mullet.

Rick, of Living Waters Guide Service, reports that nearshore fishing has been a bit slow, though some fish are still being caught. Spanish and blues have been chewing just off the beach, while a handful of kings and false albacore have made a showing as well. The bite for all four species should improve as the water cools.
Offshore fishing has been getting back to normal, with wahoo and blackfin tuna getting thicker by the day. Most of the action has been found between 150-300’ of water.
Sailfish are making their usual fall showing, with small packs and singles both invading the spread.
On the offshore bottom, grunts, pinkies, beeliners, sea bass, and triggers are all on fire, with 120-180’ of water seeming to be the best spot to put lines down. Gag and scamp grouper are occasionally being brought in.

Devin, of Johnnie Mercers Pier, reports that kings from 9-25 lbs. have been caught on bluefish.
Blues themselves are falling for Gotcha plugs, as are spanish.
A lot of throwback flounder have come in on live bait.