Guide Time – A Fatback Fit For A King

Hatteras Island is a unique place to fish no matter the season or target species, but for me heading offshore in late November was especially exciting as it would be my first time targeting the well-known, late fall king mackerel fishery.
The plan was to join Capt. Jeremy Hicks, of Calypso Sportfishing out of Hatteras Harbor Marina, to live bait fish for these big king mackerel that school up off the coast. However, this had been our standing plan for most of November, but mine and Jeremy’s busy schedule, coupled with the challenging weather and wind patterns off Hatteras, had us crossing fingers all week that the favorable forecast for the last Friday in November would hold and we would finally get our window.
The forecast did hold, so after a quick trip that morning to Oden’s Dock, perhaps the only place in town this time of year to grab a cup of coffee at 5:45 am, I headed over to Jeremy’s slip. Garrett Palnatier (Jeremy’s good friend that had agreed to head out with us today) and Bobby Papai (Jeremy’s regular mate for commercial trips this winter) were already prepping the boat.
My long-time ECU friend Kelly Hogan, from Nags Head, pulled in, arriving just a little before Jeremy, and then we all headed out for a day of live bait fishing for king mackerel.
The Calypso, a clean 45’ Custom Carolina Sportfisher, was easily the biggest boat I had ever been on for the purposes of targeting king mackerel, so I enjoyed my seat on the couch and being out of the November wind as we began winding our way towards and through Hatteras Inlet.
Outside the inlet, Jeremy turned the corner to start heading up the Hatteras shoreline looking for bait. The chatter on the radio was just as much about ducks as it was fishing, and Jeremy in the bridge couldn’t help but point out the small flocks of sea ducks here and there that scattered when we drew near. 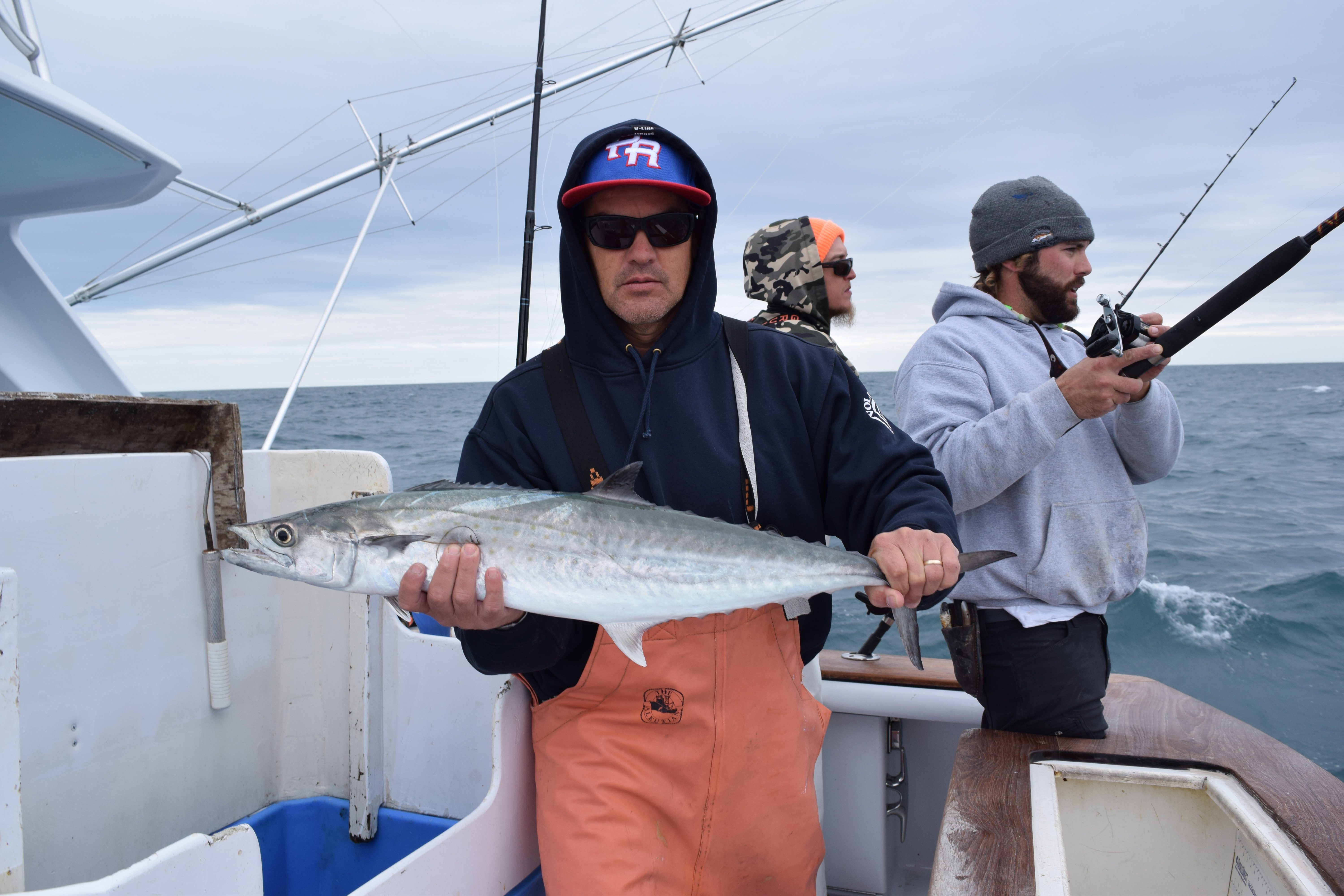 Kelly Hogam gets ready to drop a king mackerel in the box, while Mate Garrett Palnatier gets ready to engage another king striking a live fatback off the coast of Hatteras.

With plenty of birds in the area, the challenge, as Jeremy saw it this morning, wasn’t going to be finding bait, but rather getting his big boat shallow enough to be able to throw the cast net on them.
Our initial pass up the Hatteras shoreline didn’t present any obvious targets. There were no tell-tale flips or any surface activity. The sun was low and cloud-covered, so the pelicans weren’t yet seeing fish and diving on them to help guide our efforts. These conditions had us all the way up to the Frisco shoreline before Jeremy finally saw what he was looking for on the machine—heavy marks down deep.
Two cast net throws, one off the bow and one from the stern, both successfully brought up a load of fatbacks (pogies, to me). These fatbacks were too small for our king mackerel efforts, though, so the decision was made to bring out the drop net.
A big barrel was moved to the back of the boat, and Bobby and Garrett quickly peeled out the net, making sure the top line of the net never crossed over the bottom line of the net. We waited just a handful of minutes after the last of the net went out, and then started the haul in. The mesh size on the net would make sure any small ones would pass through and only the larger ones would hang up.
Bobby and Garrett retrieved the net, and Kelly and I scooped up the fatbacks in dip nets to carry over to the makeshift livewell that Jeremy puts on his Sportfisher for the fall king bite. Yes, we had found king mackerel-sized fatbacks, but we hadn’t found enough on this drop, so the net would be going back out at our next good marks on the machine.
When we came back to start gathering the second deploy of the drop net, this time the water all around the net was muddied and stirred up, a promising sign that our net had found a better haul. The signs were correct. We repeated our teamwork, and then stowed the nets, checked the livewell, scooped out a few floaters, and turned up the rpms to head offshore to find the fish.
On the phone prior to our trip together, Jeremy had talked about potential spots to target that ranged from 8 to 12 miles. Now that he had pulled back on the throttle to allow Bobby and Garrett to start putting out some baits, I asked him about the location of our first stop.
“Nowhere,” he replied. “It’s just an eight degree temperature change out in the middle of nowhere, and we’re just inside it in 16 fathoms.”
There were close to a dozen boats around, as the fleet had beat us out because they didn’t stop to find bait but were opting for the commercial approach of trolling strip baits and Drone spoons. We have missed some early morning kings, but we were happy to have a livewell full of fatbacks and 7’ live bait rods, instead of downriggers and electric reels. 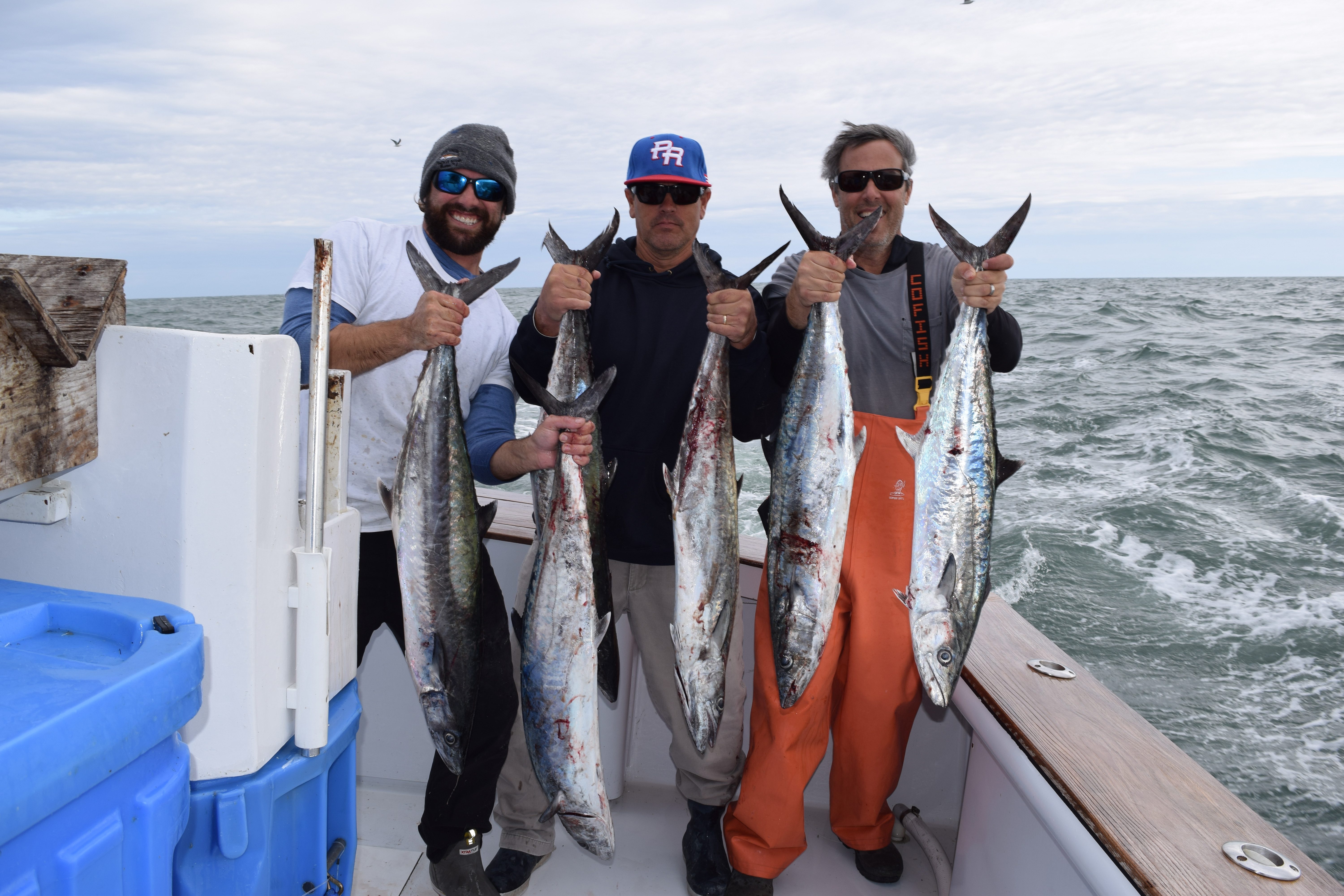 Mate Garrett Palnatier, Kelly Hogan, and Gary Hurley with some of the kings they boxed while live baiting a temperature change about 8 miles out of Hatteras Inlet. They were fishing with Capt. Jeremy Hicks on the charter boat Calypso out of Hatteras Harbor Marina.

Jeremy likes to run a four-bait spread when live bait fishing for kings. He sends out one line each off of the two outriggers, a short line from the stern, and then a long line from the bridge. Our first king hit immediately on one of our outrigger lines.
Kelly and I both moved to grab the rod as soon as we heard drag, but Jeremy quickly called down and stopped us, as he doesn’t want to pick up the rod too soon. He explained his preferred strategy, “Leave it in the rod holder. When you get a strike, give it a 5-6 second count, and then pick it up.”
Kelly followed instructions, waiting to grab the rod until just about the end of the king’s modest first run, and then he brought the fish in relatively easy, especially for being foul hooked. We called the 10-12 lb. king a good warmup fish and started looking for more.
Jeremy’s live bait rigs were fairly standard. He likes the wire to be about as long as the distance from the rod tip down to the reel, as this length makes for easy storage and safe travel. Then he likes to connect the wire to the 20 lb. mono on the 6:1 reels via four arm lengths of 40 lb. fluoro. The two-hook rigs use standard #4 trebles, with the width of a fist separating the two hooks.
We may have missed the early morning bite, but our live fatbacks worked beautifully. We seemed to be out producing the boats around us, steadily putting kings in the box that weighed anywhere from 10-20 lbs.
Live bait king fishing is great for visuals, and our fish delivered. Many of our strikes involved kings skying out of the water, or thrashing the water where there was (or once was) a bait. Since many of our king bites came from below the bait, Jeremy would periodically reinforce that he likes to hook the second treble on the underside of the fatback.
Kelly was fighting yet another fish, one that had taken the long line, and as we waited for Kelly to get the fish close enough to see color, Garrett asked if I wanted to gaff this one. Of course I wanted to gaff, thinking that Garrett had seen my competence over the course of the morning and now considered me a peer.
Then I got a glimpse of Kelly’s fish, and it looked a little different down in the water column. When it finally got near the surface, I realized that I hadn’t met any type of Garrett approval. Kelly was tight to a false albacore, and that was probably the reason why I had been handed the gaff.
I didn’t say anything. I just gaffed the albie and flipped it in the box.
As I was fighting the next fish, another one that had struck the longline, Garrett asked Kelly if he wanted to gaff this time. I knew the meaning of that question. I knew I wasn’t fighting a king. I, too, was bringing in a false albacore.
The albacores continued to move in on us, and with the building wind and seas, we all agreed with Jeremy’s decision to head in a little early. We already had plenty of kings in the box, and leaving now would have us at the Hatteras Inlet on a higher tide, making for a friendlier re-entry, as well as making it possible for us to take the inside shortcut to the marina.
Jeremy took the helm, and Garrett, Kelly, and I posted up on the couches again, but Bobby stayed working. He wanted to handle the leftover fatbacks on the run in, rather than doing them later back at the dock.
First he cut the head and lower belly off, and then he cleaned out the innards. These trimmed and cleaned fatbacks were then thrown in a bucket so they could be brined that night (soaked in a saltwater mixture to pull out all the blood).
After brining, each fatback would be turned into strip baits. With each half of the fatback being turned into two strips, Bobby was creating four strip baits per fatback that the crew would use on Monday, their next commercial king fishing trip together. These fatback strip baits would be put on double-hook rigs and pulled behind Sea Witches.
The Calypso likes to live bait fish for king mackerel when they have a charter, and while they do some commercial live bait fishing, the more efficient method when strictly playing a numbers game is to do what the fleet had been doing when we arrived at the temperature change that morning—pulling strip baits and Drone spoons behind two downriggers and electric reels.
Capt. Jeremy Hicks, of Calypso Sportfishing out of Hatteras Harbor Marina, loves taking clients out in November to highlight the area’s special king mackerel fishery that time of year. Though we hadn’t seen the big ones on our trip, the king mackerel guys will tell you that days of multiple kings from 30-50 lbs. can be expected when the fall conditions are right.
You can also book Jeremy in the winter months to chase a bluefin, but his true charter season starts every April when he fills up boxes of tuna (yellowfin and blackfin), mahi, and wahoo. In the summertime the bite is mostly dominated by mahi and billfish, and then in the fall Hatteras offers all the major targets: yellowfins, blackfins, wahoo, mahi, and billfish.
You can find plenty of information about fishing on the Calypso by visiting www.fishcalypso.com, or you can call Jeremy directly at (252) 996-0977.
Just remember…fatbacks are pogies, and if his mate hands someone else the gaff, you can go ahead and crank down on the drag.