The 2018 Hook and Bones Redfish Open was held in Swansboro on August 11, and the goal of every angler in attendance was to find the two biggest red drum in the area during a single day of competition in order to win the guaranteed first place prize of $5,000.

Beating last year’s winner “Chasing Gingers” by .25 lbs., it would be Johnathan Garrett and Matt Littleton, of “On Point,” who won that 5k with a two fish aggregate of 14.16 lbs. They also took third in the Big Fish TWT with the biggest of their two reds (a 7.2 lb. fish), adding another $250 to their total haul.

Garrett says that he and Littleton “didn’t have a good game plan, and we didn’t pre-fish much. We did what we normally do… we just went fishing.” With that being said, the pair wouldn’t find a fish for the first couple hours of the day, and it was only after seeing a new school of reds that Littleton was able to hook, on his first cast, a 6.96 lb. fish.

They caught over 20 more fish throughout the course of the day, but with their total weight sitting at around 13 lbs., they didn’t feel confident that they had the winners. Finding themselves on the end of the falling tide, they decided to try two more spots before weighing in. 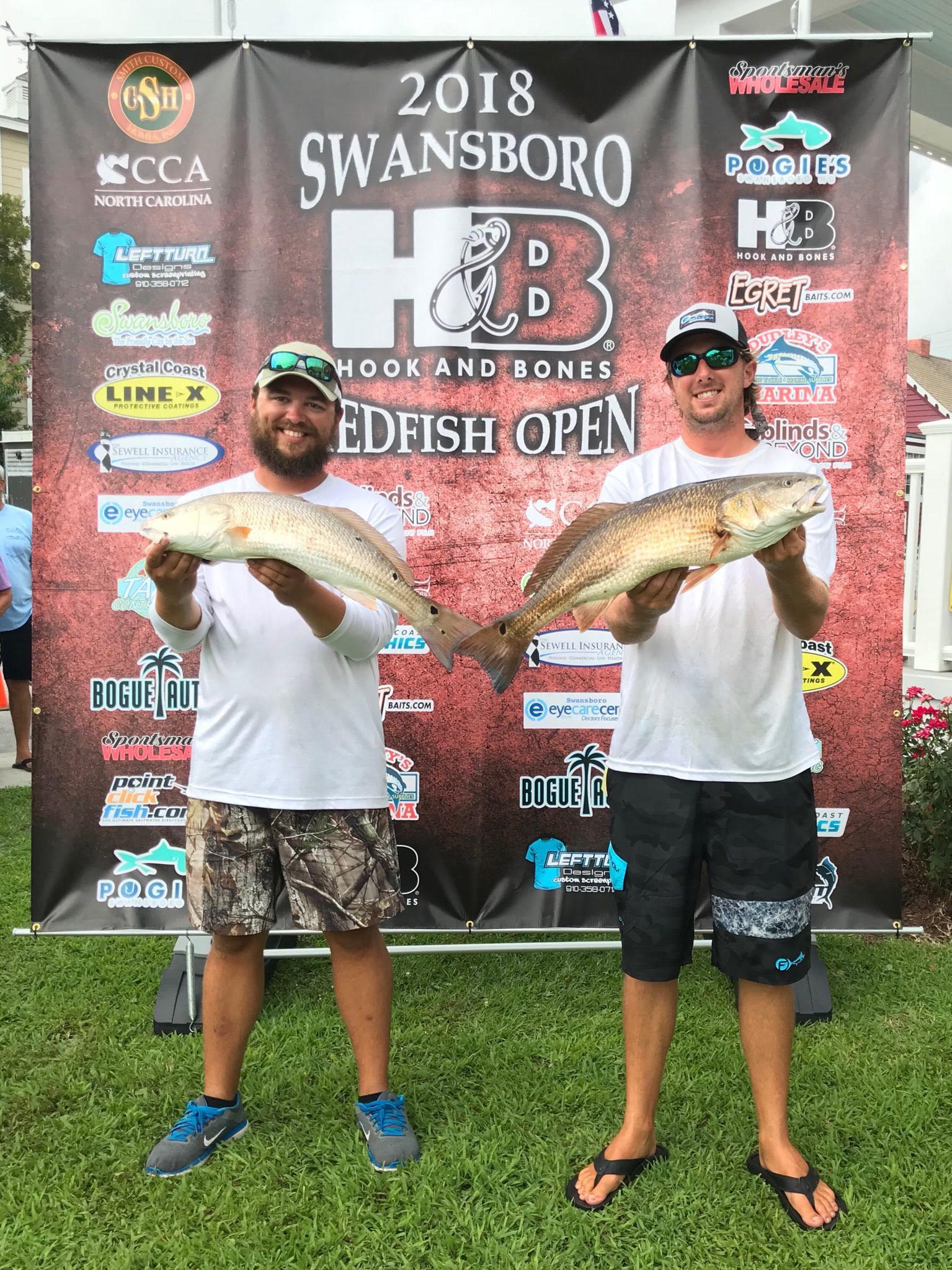 Matt Littleton and Johnathan Garrett, of “On Point,” with the 6.96 lb. and 7.20 lb. redfish that won the 2018 Hook and Bones Redfish Open. Both of the reds fell for Gulp baits on Fathom jig heads.

At the first spot, Littleton hooked and reeled a “monster red” to the boat, but lost it to a bent hook right before Garrett could net it. At the second spot, Garrett was able to nab the 7.2 red that put their total weight at 14.16. It was a five minute ride to the weigh in and their $5,000 check.

The team didn’t even use a quarter tank of gas throughout the day, and all of their fish were caught in 2’ or less of water on the marsh flats. Both of the winning reds fell for a Gulp shrimp on a Fathom jig head.

Overall, $12,500 was awarded, and part of the proceeds from the tournament went toward local angler Tim Taramelli, who, along with his daughter, is facing a long road to recovery after a recent and severe car accident.