Lewis, of Island Tackle and Hardware, reports that redfish are coming in on fresh shrimp and artificials, such as 3″ Gulp shrimp in new penny.

A few black drum have been found on oyster beds and under the bridge, along with some sheepshead.

Citation flounder have been biting in the river, along Snow’s Cut, and around some docks near the inlet. Finger mullet is the best bait.

Speckled trout have been falling for live shrimp.

In the surf, especially toward Fort Fisher, anglers are finding pompano, whiting, and a few reds. All are coming on sand fleas and fresh shrimp.

Spanish and kings are feeding in the 5-10 mile range.

On the bottom, some black sea bass, a few grunts, and a decent amount of grouper are biting squid and cigar minnows. Jigging is producing amberjacks, small bonita, and kings.

Offshore, a few dolphin, wahoo, and sailfish have been reported. 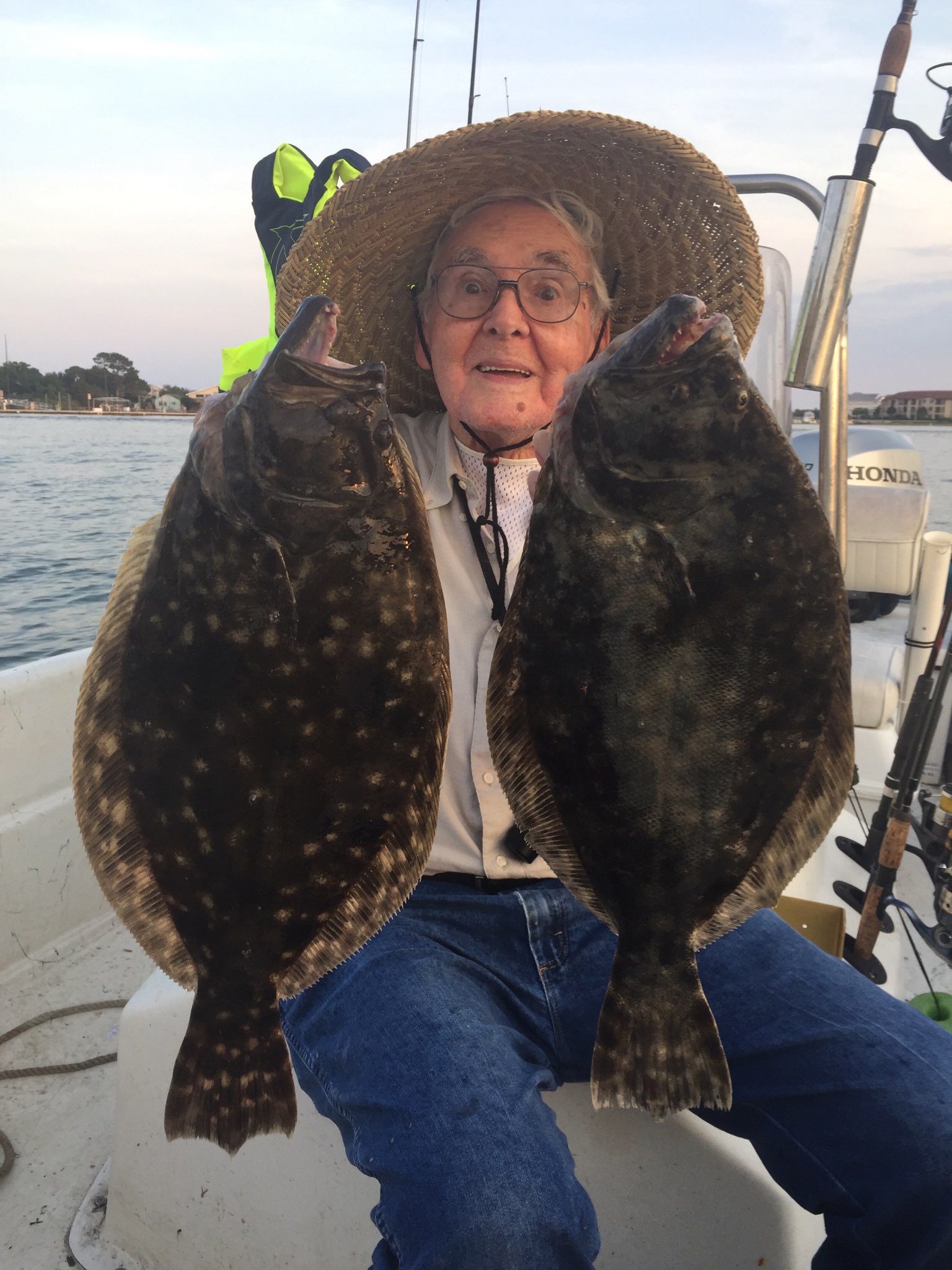 MC Fowler (age 88) with a pair of keeper flounder caught in the Carolina Beach boat basin with his sons Barry and Tim Fowler.

Christian, of Seahawk Inshore Fishing Charters, reports that good numbers of redfish are coming in, with most of the fish being 22-26” but a few over-slot mixed in. The mostly lower- to mid-slot redfish have been falling for mullet minnows, which have been plentiful on most days (and the best bait). Mud minnows are also catching some of the reds, as well as artificials and topwaters (on calm mornings). Fishing bait on the bottom with Carolina rigs, though, has produced the majority of the red drum catches.

In the deeper water locations, flounder are eating live baits, but scented soft plastics will also do the trick. You can also find the flounder in creek mouths and shallow drop-offs, where mud minnows and finger mullet on a Carolina rig along the bottom have produced the most flatties. The majority of the fish are small, but some keepers in the 16-20” range are coming in.

Spanish mackerel and jacks have been at the mouth of the river on nicer days. These fish are eating anything shiny, such as Big Nic Spanish Candies or Johnson spoons.

Luke, of Spot On Charters, reports that inshore fishing has remained steady, and flounder have been providing the most action. Targeting deeper holes near marshes with live mullet or pogies on a Carolina rig has been the best bet.

Anglers targeting redfish are finding a consistent bite in the shallow water creeks in the lower Cape Fear River. Some days have produced double digit numbers. Most fish are hitting a live finger mullet pinned to a Carolina rig near oyster structure. Z-Man and Gulp soft plastics are working well, too. Around low tide, the redfish have been feeding well in area creeks located around oyster rocks and dock structure. Live mullet or mud minnows on Carolina rigs have worked best. When fishing with live shrimp on a float rig, anglers are finding speckled trout feeding in the morning and evening hours.  Covering lots of water near marsh banks has been the most effective method for finding the specks. 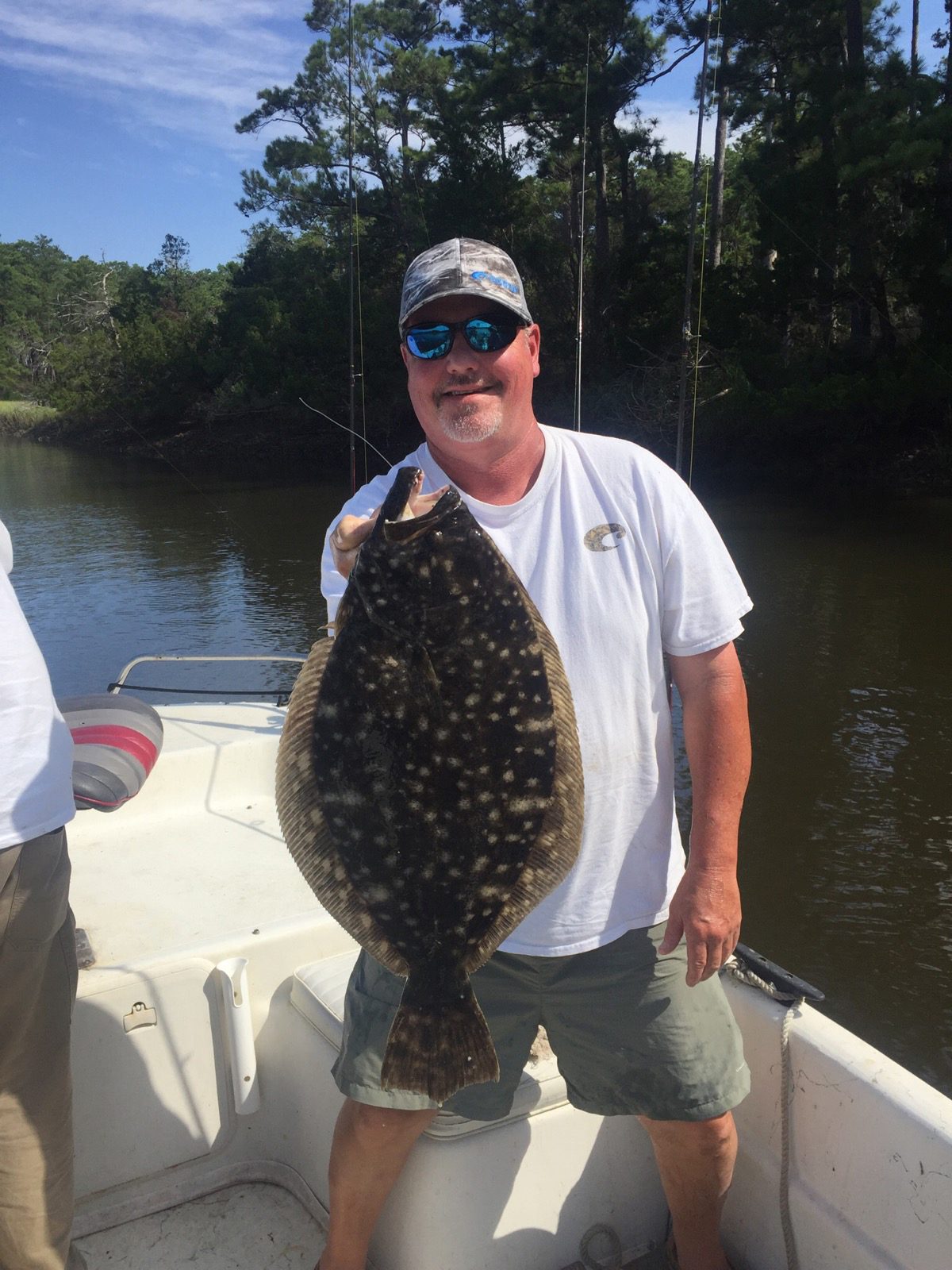 Craig Trotter with a fat flounder caught in a creek in the lower cape fear river using a finger mullet on a Carolina rig.

Luke, of Coastline Charters, reports that inshore flounder fishing is on fire, with lots of keepers being brought in. Using live finger mullet or live menhaden on a Carolina rig is producing the most fish, but artifials (such as Blue Water Candy jig heads with a Z-Man soft plastic) are producing good flounder action as well. Docks, deep holes along the ICW, and grass banks are all holding fish.

The redfish action is still hot. There are some nice slot to over-slot reds in the ocean around the same structures holding flounder. Look to catch the reds with the same tactics used for flounder.

The inshore reds are feeding primarily around docks. Live and cut baits on a Carolina rig are getting bites. Some of the reds are also staging back in the marshes. Topwaters early and late in the day are a great way to target and locate the reds in the back of creeks and marshes.

Sheepshead are still hanging around tight to bridges and docks, and fiddler crabs on a Carolina rig will catch them.

Rod, of OnMyWay Charters, reports that anglers trolling along the beachfront with silver Clarkspoons on #1 planers have landed spanish well into the double digits. Using weights and a minimum 30′ of leader has been the key to boating fish in the 2-3 lb. class.

Offshore in the 12-25 mile range, kings have been feeding well. The size of fish has ranged from throwbacks to 30 lb. fish. A few mahi and barracudas have also been in the mix.

On the bottom in this range, gag grouper and black sea bass have been hitting live and cut baits.

The 35-45 mile range has been holding beeliners, scamp and red grouper, and black sea bass.

Out at the Gulf Stream, anglers are landing wahoo, mahi, and kings.

Woody, of Kure Beach Pier, reports that lots of keeper flounder are being pulled in, with fish as big as 3.5-4 lbs. not out of the realm of possibility. Live mud minnows are the best bait.

Sheepshead, whiting, pompano, and croaker are all biting as well.