Kevin, of Island Tackle and Hardware, reports that surf fishing has remained steady on Carolina Beach. Anglers fishing with fresh shrimp on bottom rigs have landed good numbers of whiting and black drum.

Inshore, the speckled trout action has heated up. Those fishing the Cape Fear River have found fish holding on marsh banks and points. MirrOlure MR17s and topwater plugs have worked well, but live shrimp under a float rig has done the best. Most fish have been in the 15-18” range, with a few 20” fish in the mix.

Redfish are holding in the creeks and on dock structure along the waterway and in the river. Cut mullet and live mud minnows on Carolina rigs have been the ticket to getting the reds to bite. Most fish have been in the 16-22” range.

Just off the beach, the king bite remains strong. Slow trolling live baits has landed larger fish, but dead cigar minnows have worked on the smaller-class kings. Targeting structure has been the key to success. 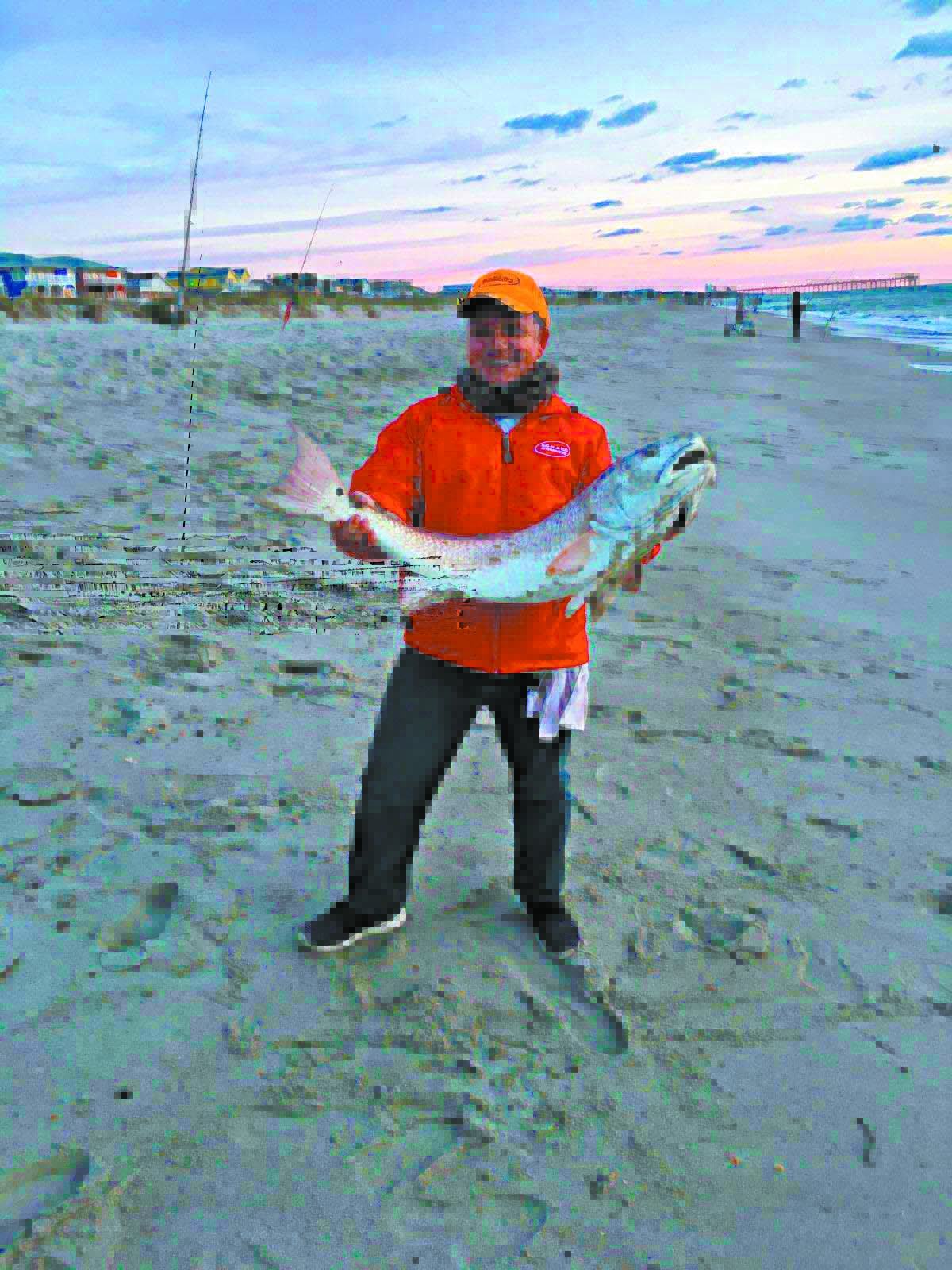 Christian, of Seahawk Inshore Fishing Charters, reports that anglers are landing good numbers of black drum on the bottom end of the tide. Casting Carolina-rigged dead shrimp in 3-7′ of water along oyster structure has produced the best numbers. Most fish have been in the 15-17” range, with a few larger ones in the mix.

A mix of under-slot and slot-sized redfish have been holding near the same areas where the black drum are located. Dead shrimp on Carolina rigs, as well as Gulp shrimp rigged on 3/16 or 1/4 oz. Wahoo Salty Flats jig heads, have been the best tactics for the red drum.

Speckled trout fishing has picked up, and targeting the moving tide has been the key to landing good numbers of fish. MirrOlures and soft plastics in purple have been best. Anglers targeting oyster points and creek mouths have done best.

Just off the beach, false albacore are feeding well. Casting Big Nic jigs in pink and bone have produced higher numbers of fish.

A few big drum are still being landed in nearshore waters. The key to finding the drum has been locating menhaden schools. 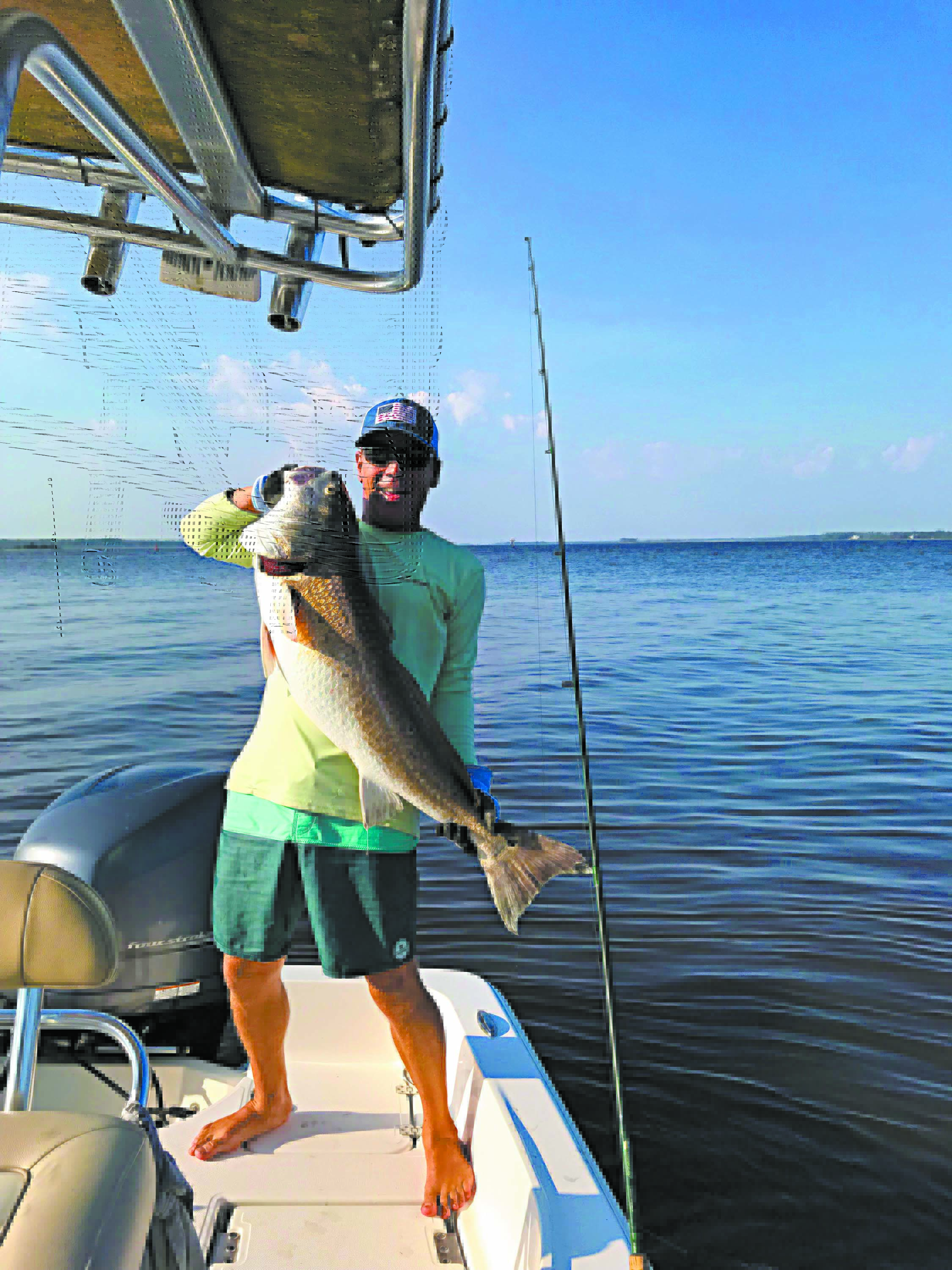 Michael Dean, of Wilmington, NC, with a 43″ red drum that fell for a live finger mullet in the Cape Fear River. He was fishing aboard the “Two Hearted.”

Rod, of OnMyWay Fishing Charters, reports that kings have been biting primarily in the 14-18 (and sometimes the 20) mile range. Live bottom ledges and rocks are the best places to look, with the coral bottom inshore of the Schoolhouse and the rocks and ledges south of it consistently proving to be good places to fish. Yet another hot spot has been the rocks and ledges inside of 23 Mile Rock and the 30-30 area, and if you can get out to Frying Pan Tower, you can find all the kings you want.

Most of the kings have been 8-15 lbs., and while there are a few spots that are holding 20 lb. fish, most of the bigger kings are down around the Southport area. The best way to find the bigger fish is to throw out Drone spoons and Sea Witches with double-hooked belly strips. Fast troll them to cover as much water as possible—just make sure you’re trolling over areas with a lot of hard bottom.

The 18-30 mile range is holding plenty of gag grouper, with sizes anywhere from barely-legal up to 20 lbs. being caught. It’s been easy to limit out.

There have been plenty of black sea bass, beeliners, grunts, and gray snapper biting in the 25-30 mile range. You will find the occasional pink snapper as well, though most of them are a little further out. When bottom fishing, don’t be afraid to move around and drop anchor at a few different spots if you’re not getting bites.

The wahoo bite has been good in the Gulf Stream, with plenty of blackfin tuna around. Find rocky or hard bottom in 150-220’ of water, and don’t spend too much time in any water deeper than 250’. Bottom fishing has been great between 130-150’ on live bottoms, with grouper and huge triggerfish making up most of the bite.

Luke, of Spot On Charters, reports that the trout bite is on fire in the Cape Fear River, all the way from the power lines on south. The trout can also be found in the ICW and around area inlets. There haven’t been a lot of mid-sized fish, with most of the catch consisting of either spikes or fish just under the 6 lb. mark. Most of the small fish have been hanging on the bottom, where Trout Tricks and paddletail grubs will attract attention when slowly bounced, and the bigger fish have been higher in the water column, where MR-17s are getting the nod.

Carolina-rigged mullet have been doing the most damage. There are redfish around, too, and it’s easy to pick one up when targeting specks.

Luke, of Coastline Fishing Charters, reports that inshore fishing has been all about red drum, black drum, and speckled trout. The reds have been hitting live mullet and Gulp, and the best places to look are in the creeks on low tide. Most of the fish have been under-slot, but keepers have been mixed in.

The black drum are going for Carolina-rigged shrimp, especially in the eddies around bends in the creeks or off shell points with moving water. Like the reds, most of the black drum have been small, but there are keepers in the mix.

Small trout are thick, though keepers are biting more frequently. Soft plastics are enticing the fish to eat, but live shrimp and mullet have been working better.

Molly, of Kure Beach Pier, reports that bottom fishing from the pier has been steady. Anglers have landed whiting, bluefish, and croaker on a mix of dead shrimp and sand fleas.

Those plugging from the pier have picked up some spanish and bluefish on Gotcha plugs and Stingsilvers. A few kings have also been landed from the end of the pier