Erving, of Hatteras Jack, reports that surf anglers have been catching great numbers of sea mullet, croakers, and spot while casting shrimp into the first drop-off from the sand.

Recent southwest winds have pushed up some cold and dirty water, but a quick wind change should see the return of better numbers of spanish.

Pier anglers are reporting some nice-sized black drum being caught on Carolina-rigged shrimp.

Speckled trout have been biting well in the sound for anglers fishing soft plastics under corks in the deeper channels. A few slot-sized red drum are mixed in and taking the same soft plastics.

Anglers keeping baits on the bottom and bouncing them along inshore ledges are landing some keeper flounder.

Jim, of Rodanthe Pier, reports that some black drum (up to 6 lbs.) are being caught with Carolina-rigged sand fleas.

Bottom fishing with shrimp has been producing good numbers of sea mullet, spot, and croakers. A few smaller flounder are hitting shrimp fished closer to the breakers.

Casting Gotcha plugs at bait schools has been producing strikes from spanish mackerel and bluefish.

Anglers fishing off the end are reporting tarpon and king mackerel in the area.

Heather, of Frank and Fran’s, reports that bottom fishing around Salvo has been producing black drum, spot, sea mullet, and croakers.

Spanish mackerel are being caught off the beach in the early morning hours with glass minnow jigs.

Pompano are being hooked from the Hatteras and Frisco beaches with sand fleas.

Sound-side anglers are finding speckled trout with soft plastics and Vudu Shrimp under popping corks. Using Pro-Cure scents has been key in getting a better number of bites. 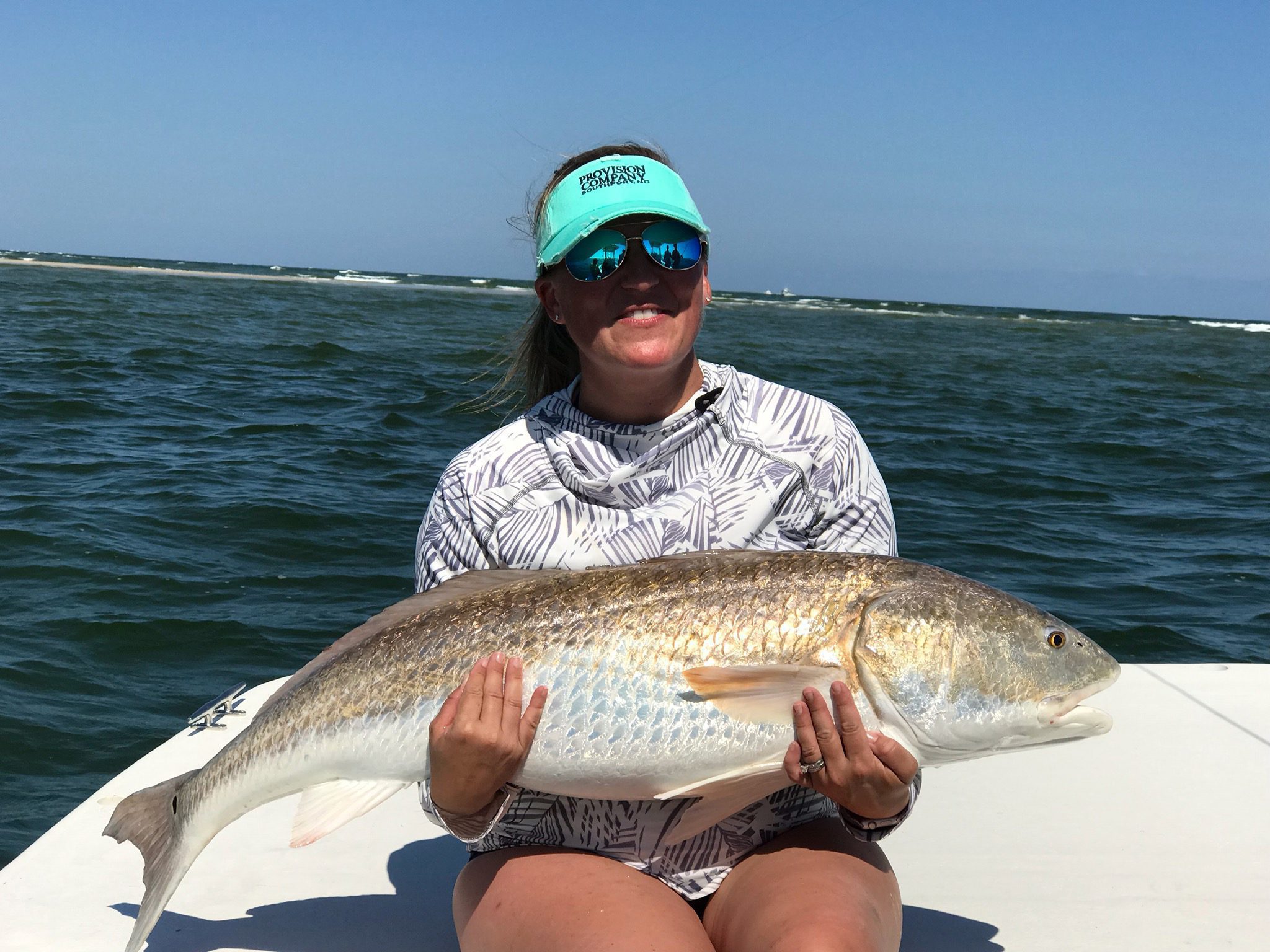 Amy Scanlon, of Rapid City, SD, caught this 47″ red drum on a bucktail in Hatteras Inlet. She was fishing with Capt. Jake Dempsey of Team Dempsey Guide Service.

Kristen, of Avon Pier, reports that spanish mackerel are being caught in good numbers with Gotcha plugs.

Bottom fishing with shrimp has been producing sea mullet, croakers, and spot, and fishing sand fleas tight to the breakers have caught a few pompano (up to 3 lbs.).

Anglers fishing large cut baits off the end landed and released another large tarpon this week.

Cameron, of Frisco Tackle, reports that surf anglers have been landing good numbers of sea mullet and croakers with pieces of shrimp.

Pompano are being found in the first drop-off, with clean water really helping bite numbers.

A few scattered red drum have been caught on Carolina-rigged cut bait.

Bluefish and a few spanish mackerel are hitting casting jigs, with most fish being caught either early or late in the day.

A few wahoo have been in the daily counts, with most hookups coming on deep baits.

Large king mackerel are scattered throughout the area, and they’re hitting skirted baits.

Bottom fishing has been producing great numbers of triggerfish and a few large amberjack.

Nearshore trips have been landing limits of spanish mackerel and bluefish while pulling Clarkspoons under smaller planers off the beach.

Speckled trout are in the sounds. They’re being caught in deeper holes early and late in the day with soft plastics.

Joey, of Fingeance Sportfishing, reports that spanish mackerel fishing has been phenomenal, with limits of fish being caught while pulling spoons and casting glass minnow jigs to feeding schools. Good numbers of bluefish are mixed in, but most of the blues have been holding tight to the beach.

A few schools of false albacore are being spotted feeding on the surface, and they can be caught with small glass minnow jigs.

Speckled trout fishing has been good this summer, with some large fish (up to 4 lbs.) falling for soft plastics fished under a popping cork.

A few flounder are mixed in, and they’re mostly striking soft plastics and live baits fished on the bottom.

Slot-sized red drum are pushed up onto the flats and hitting soft plastics.

Jay, of Bite Me Sportfishing, reports that good numbers of dolphin are being caught from under grass patties with light-lined baits.

Citation-class kings (up to 38 lbs.) are hitting high-speed lures and skirted baits.

Anglers have been seeing quite a few sailfish come into the spread, with some sails willing to take a skirted ballyhoo.

Blue marlin have been scattered so far this year, but boats are still reporting a few when pulling large plugs in the deeper waters outside the temperature break.

Jeremy, of Calypso Sportfishing, reports that dolphin fishing has been very good, with the fish schooled up well in deeper water. A few wahoo are mixed in the count, and both species are hitting skirted ballyhoo.

Billfish are in the area. Pulling large ballyhoo in areas deep and free from weed lines is the best tactic.

Nearshore anglers are able to find easy limits of good-sized spanish mackerel and bluefish while pulling spoons just off the beach.

Jessie, of Carolina Girl Sportfishing, reports that dolphin fishing has been great, with anglers finding limits of good-sized fish while pulling skirted ballyhoo along weed lines. Light-lining cut baits has produced good numbers of fish, too, when anglers find them schooled up under a grass patty.

A few wahoo are in the area, and they will readily hit skirted ballyhoo.

Anglers are trolling large ballyhoo and plugs in search of some of the blue marlin and sailfish in the area.

Alan, of Tradewinds Tackle, reports that surf anglers have been catching spanish mackerel in the early mornings with glass minnow jigs around ramp 70.

Bottom fishing with Fishbites bait strips has been producing croakers and pigfish, and red drum are hitting cut mullet fished on Carolina rigs. Anglers fishing at night have landed a few speckled trout with shrimp.

Sound-side anglers are reporting a good number of speckled trout being caught in the deeper channels with soft plastics on popping cork rigs. A few over-slot red drum (up to 33”) are hitting soft plastics and Carolina-rigged cut baits.