Ryan, of Hatteras Jack, reports that bottom fishing in the surf with shrimp has been producing sea mullet and spot, and pompano are being caught with sand fleas.

A few legal-sized flounder have been pulled in on soft plastics around Rodanthe.

Sound-side fishing for speckled trout has been good for anglers casting soft plastics, and a few puppy drum are being caught in the same deep holes on the sound-side. 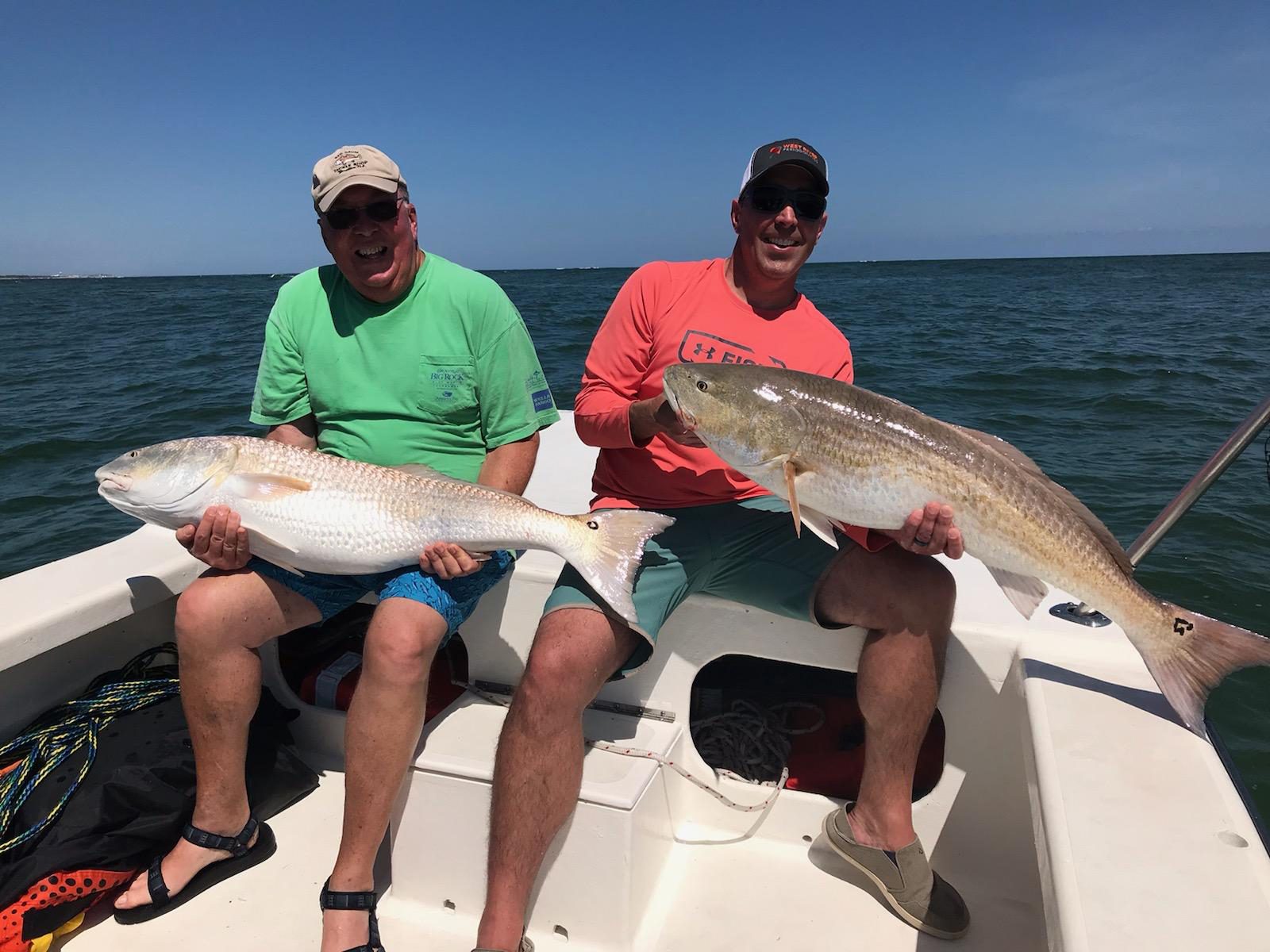 Chuck Scanlon, of Wilmington, NC, and Dr. Chuck Scanlon, of Rapid City, SD, with a pair of 46″ red drum (released) hooked in Hatteras Inlet. They were fishing with Capt. Jake Dempsey of Team Dempsey Guide Service.

Jim, of Rodanthe Pier, reports that the sea mullet bite has been good with all the recent dirty water. Shrimp fished on a bottom rig has had the most success.

Spot are mixed in with the mullet. They prefer bloodworms as bait.

Bluefish are hitting Gotcha plugs cast to surface feeding schools. When not sight casting, Carolina rigs with small cut mullet has had success.

Sheepshead are being caught along the pilings with sand fleas and shrimp.

A few citation-sized red drum have been landed by anglers off the end with large chunks of mullet.

Heather, of Frank and Fran’s, reports that bottom rigs fished along the Rodanthe surf have been producing good numbers of sea mullet, croaker, and spot. Salvo area surf anglers are landing croakers with cut shrimp, and pompano are feeding on sand fleas fished in the holes just off the beachfront.

Spanish mackerel are hitting casting jigs from Avon down through Frisco. Days with clean water have seen better numbers of fish push within casting distance. Bluefish are mixed in with the spanish, and better numbers are coming in from the Hatteras area.

Sound fishing has been productive, with anglers finding large trout (up to 25”) while casting soft plastics into holes behind Rodanthe. A few puppy drum are mixed in with the trout, and they’re hitting both soft plastics and Carolina-rigged live bait.

Kristen, of Avon Pier, reports that solid numbers of sea mullet have been coming over the rails. Shrimp, bloodworms, and Fishbites strips fished on bottom rigs have all been having success with the large (up to 2 lbs.) sea mullet around.

Bluefish are hitting Gotcha plugs from areas mid-way out to almost the end of the pier. 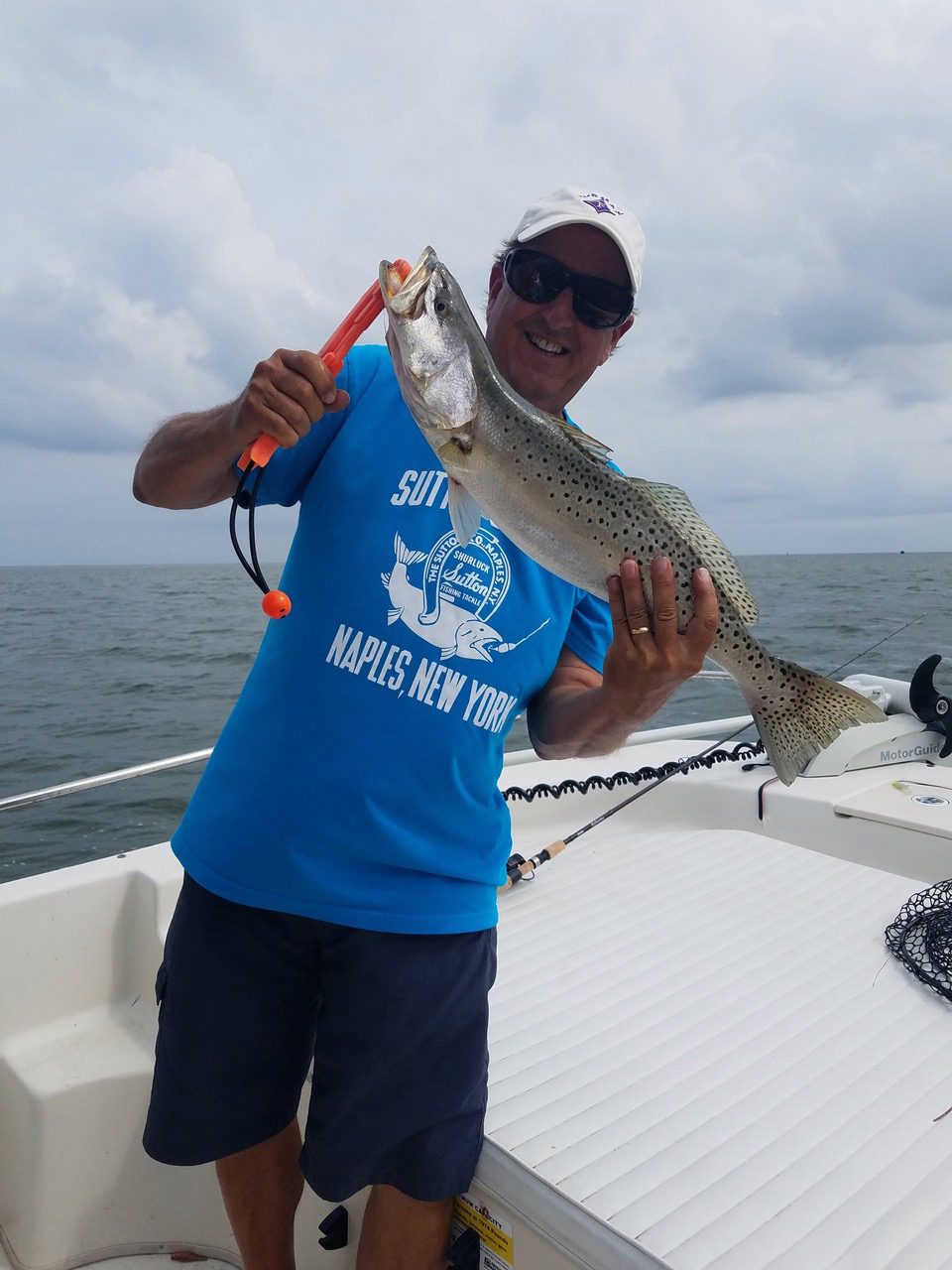 Rick Anzolut, of Avon, NC, with a 25″ speckled trout (released) that fell for a Z-Man Slam Shady on a 3/8 oz. yellow jig head. He was fishing aboard the “Lindsey Rae,” captained by Dale King.

Spanish mackerel and bluefish are within casting distance for anglers throwing glass minnow jigs and Gotcha plugs. Early mornings have been the most successful for spotting surface feeding schools.

Lee, of Teach’s Lair, reports that offshore anglers have seen the dolphin bite pick back up, as boats are pleased to find double-digit numbers on many trips. A few scattered blackfin tuna are mixed in, and they’re hitting skirted ballyhoo.

Bottom fishing has been great, and cut baits have been catching beeliners, snappers, triggerfish, and rainbow runners.

Amberjack and barracuda are hitting live baits and vertical jigs fished around wrecks.

Nearshore anglers are catching large numbers of spanish mackerel while trolling spoons from the beach out to 2 miles. Bluefish are mixed in. Their numbers aren’t nearly as high, though, with many of the blues moving shallow or just inside the inlets.

Speckled trout and puppy drum are being caught inshore from the channels and holes at the edge of the flats. Soft plastics under a popping cork have worked best, with Carolina-rigged live baits bringing in a few as well.

Sheepshead and black drum are hanging around pilings and channel markers. They’re feeding on sand fleas, shrimp, and fiddler crabs.

Joey, of Fingeance Sportfishing, reports that large schools of spanish mackerel and bluefish are from the beach out to 3 miles. Trolling spoons is catching easy limits, and then visibly feeding schools are great for throwing jigs.

Schools of over-slot red drum are being spotted around the shoals and inlet area. Casting bucktails or bottom fishing with Carolina rigs has been producing a few fish.

Sharks are plentiful in the heat of summer, hitting Carolina-rigged live and cut baits.

Inshore fishing has been great for speckled trout. They’re holding in deeper holes and around oyster beds and hitting soft plastics.

Slot-sized red drum are in the same trout areas, and they can also be found feeding on baits pushing around on the flats.

Jay, of Bite Me Sportfishing, reports that large numbers of mahi are being caught while trolling skirted ballyhoo and bailing cut baits around scattered grass lines and floating debris.

Blackfin tuna are mixed in the counts, though many have been the small “summertime” fish that are seen over the next few months.

Jeremy, of Calypso Sportfishing, reports that anglers are catching limits of mahi while trolling ballyhoo in search of bailer-sized fish under grass beds.

A few large wahoo are being caught off baits fished behind a planer.

Bottom fishing around structure has been loading anglers up with triggerfish and large amberjacks.

Citation-sized king mackerel are mixed in with the daily counts.

Jessie, of Carolina Girl Sportfishing, reports that limits of mahi are being brought in on most trips. The gaffer-sized fish have been taking skirted dink ballyhoo, with the smaller bailers preferring cut baits on light line rods.

Citation-sized wahoo (up to 50 lbs.) are hitting wire rigged baits fished deep and behind a planer.

A few scattered yellowfin were caught out around a temperature break in the Stream, and sailfish are mixed in with the counts of fish caught while trolling.

Triggerfish are plentiful around live bottom and structured areas.

Alan, of Tradewinds Tackle, reports that puppy drum are in the surf and hitting Carolina-rigged cut mullet from Ramp 72 to the inlet. Pompano and sea mullet are being caught with shrimp and sand fleas in deep holes just off the sand.

Sound-side anglers have been fishing weed-less spoons and catching good numbers of puppy drum around the flats.