Matt, of Chasin’ Tails Outdoors, reports that the spring speckled trout bite is the best that the area has seen in years, with 50-100 fish days becoming more common than not. MR17s and 14s have been slaying the specks, as have soft plastics on jig heads. If the fish aren’t going for artificials, they won’t be likely to turn down a mud minnow, and topwater baits are starting to become more viable as well.

Redfish are biting Z-Man and Gulp soft plastics on jig heads back in the creeks. It won’t be long before the water is warmed up enough for the reds to get more aggressive and start hitting spoons, topwaters, and soft plastics fished under a popping cork.

Sea mullet are biting from the turning basin out to Beaufort Inlet. Drifting with the current in 50-60’ of water has seemed to work well for anglers using Sam’s Gitter Rigs tipped with fresh bait shrimp.

Puffers are practically jumping in the boat on the Beaufort waterfront, Radio Island, and up the Cape. Surf fishing from the beach at Radio Island has produced plenty of puffers as well.

False albacore are schooling up around AR-315, 320, 330, and up toward Cape Lookout. Glass Minnow jigs have been deadly for the albies.

Flounder are slowly starting to show themselves on the nearshore reefs. Bucktails and 4” Gulp shrimp are definitely the go-to combo for the nearshore flatties.

Wahoo have been hot toward the south, with most of the action coming from between the Big Rock and the Swansboro Hole. Ballyhoo/Sea Witch combos have been productive for the ‘hoos.

Offshore fishing is also heating up for dolphin and both yellowfin and blackfin tuna. A massive 400 lb. swordfish was also caught recently.

On the bottom, triggerfish, beeliners, and sea bass have been chewing on squid and spanish sardines, and jigging for amberjacks continues to be productive. 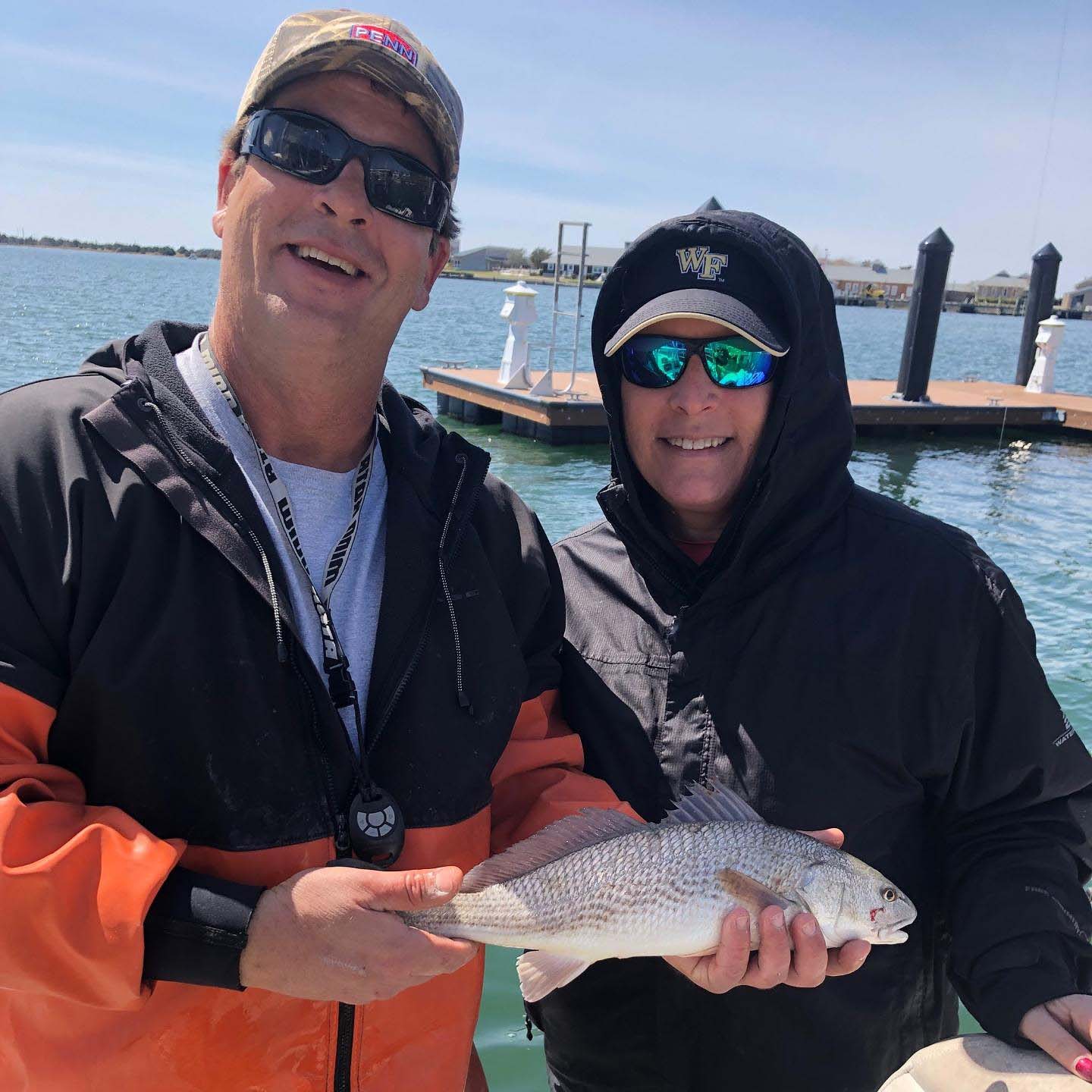 Tina Whiteheart, of Winston-Salem, NC, snagged this 22” red drum on a jig head tipped with whole shrimp. She was fishing ICW docks in Beaufort, NC, on a flood tide with Capt. Justin Ragsdale, of Breakday Charters.

Paul, of Freeman’s Bait & Tackle, reports that there are a lot of small trout in the creeks.

Surf fishing has produced pufferfish and small 14-16” bluefish, and sea mullet are starting to show up as well.

Off the beach, false albacore are periodically making a showing, as are a few bonito.

Trips to the Gulf Stream have been rare, but wahoo and blackfin tuna are out there and willing to bite.

Chris, of Mount Maker Charters, reports that plenty of blues are swimming around the nearshore reefs, along with some gray trout and a few false albacore. Black sea bass and other bottom fish have been in the 65-80’ depth range.

A few spring king mackerel are holding inside of 100’, but there are better numbers between 115-130’ on the edge of the warm water. 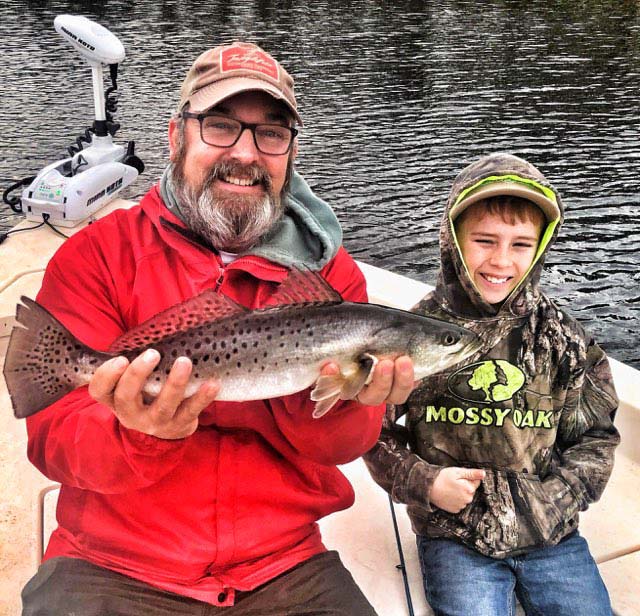 Jay Boone, of Morehead City, NC, and Buddy Bates, of Beaufort, NC, with a keeper speckled trout they landed while fishing in the lower Neuse River with Capt. Andy Bates, of Captain Andy’s Guide Service.

Dave, of Cape Lookout Charters, reports that fishing has been good in the Morehead area, with puppy drum either in the slot or just over the slot biting cut mullet, topwaters, and jigs in the backwaters.

Plenty of 16-22” speckled trout are biting as well. The specks are starting to move out into the bays, where they can be caught with Halo Swimming Shad, 4” Rapala soft plastics, or MirrOlure MR13s, 14s, or 17s.

A lot of inshore puffers and sea mullets are chewing on fresh shrimp.

Surf fishing on the east side has produced speckled trout and over-slot reds.

The big reds can also be found on the Cape Lookout shoals, where they can be fooled with a bucktail.

Smaller bluefish are starting to show up, and they can be targeted with Stingsilvers and Clarkspoons. The big chopper blues should be here soon.

Justin, of Breakday Charters, reports that there have been plenty of speckled trout in the Cape Lookout and Morehead area, and though a lot of them have been throwbacks, some keepers have been in the mix as well.

Gray trout are showing up at the nearshore reefs and are moving into the sounds, where they can be found under bridges and other deeper inshore structure. Target the grays with appropriately weighted jigs and soft plastics (or jigging spoons) to get a bite.

Sea mullet and puffers are readily biting in the turning basin, where high-low rigs and spec rigs tipped with bits of shrimp will do the trick.

In the coming weeks, expect the arrival of chopper blues around deeper nearshore wrecks and the surf zone. Cut baits in the surf and trolling plugs and spoons just off the beach should get the blues’ attention, and you can target them with light tackle as well on the inshore flats.

False albacore have been moving in and off the beach. Fly casting small minnow imitations or casting jigs will get their attention. Bonito are starting to show up, too, especially around high relief structures. Cast metal jigs to breaking fish or troll small Yo-Zuri Deep Divers to cover more water.

Schoolie kings have been holding on structure in 75’+ of water. Trolling spoons, dead bait, and jigging techniques will all draw strikes.

Tom, of Dancin’ Outlaw, reports that wahoo and blackfin tuna have been biting in 40 fathom depths, especially around the Swansboro Hole. Medium-sized ballyhoo and Sea Witches have been getting bites.

You can find good triggerfish and beeliner action in the 25 fathom range using cut bait.

Larry, of Oceanana Pier, reports that the catch over the past few weeks has consisted mainly of pufferfish.