Matt, of Chasin’ Tails, reports that speckled trout fishing has been awesome. The fish are staged up at all the typical fall haunts, from the Haystack and Middle Marsh areas, to North River and out into Bogue Sound. Gulp Shrimp and Z-Man jerk shads or MinnowZ fished under Highwater popping corks have been a top producing setup this season. Anglers are rfinding good action in recent days with MirrOlure MR-17 and MR-18 suspending plugs. Live shrimp is another great bait, though you may catch bait stealers in the process.

Slot-sized red drum are in the same areas, with all the listed trout lures producing drum strikes.

Gray trout are being caught in good numbers in deeper holes around the Turning Basin, Morehead railroad tracks, and the Highrise Bridge. Jigging Stingsilvers and Jigfish glass minnow jigs has been getting most of the bites.

Sea mullet are being landed with shrimp fished on Sam’s Glitter Rigs in the turning basin as they work their way out of the inlet.

Surf anglers have been hooking sea mullet, spots, and pompano while bottom fishing with shrimp, bloodworms, and Fishbites strips. Red drum are being caught in the surf with Carolina-rigged cut baits.

Speckled trout are holding in deeper holes between the sandbars. Anglers are having success while casting Gotcha grubs and Gulp soft plastics on 1/4 oz. jig heads.

Nearshore anglers are finding that medium-sized bluefish (up to 4 lbs.) are hitting Big Nic Spanish Candies and similar glass minnow jigs from the inlet over to Cape Lookout.

King mackerel (15-20 lbs.) are being caught in good numbers from the beachfronts out to 10 miles. Slow-trolling live baits has been the most productive. Anglers are finding that menhaden have been hard to find in recent days, but fishing cigar minnows on Mac-A-Hoos has been getting strikes. Some large fish (up to 50 lbs.) are being landed from structured areas on the east side of Cape Lookout.

Offshore anglers are landing wahoo in areas from the Swansboro Hole to the 90 Foot Drop and Big Rock. Any choice of ballyhoo-rigged Sea Witches, DTX Minnows, or Big Nic Dinnerbells have been getting strikes. 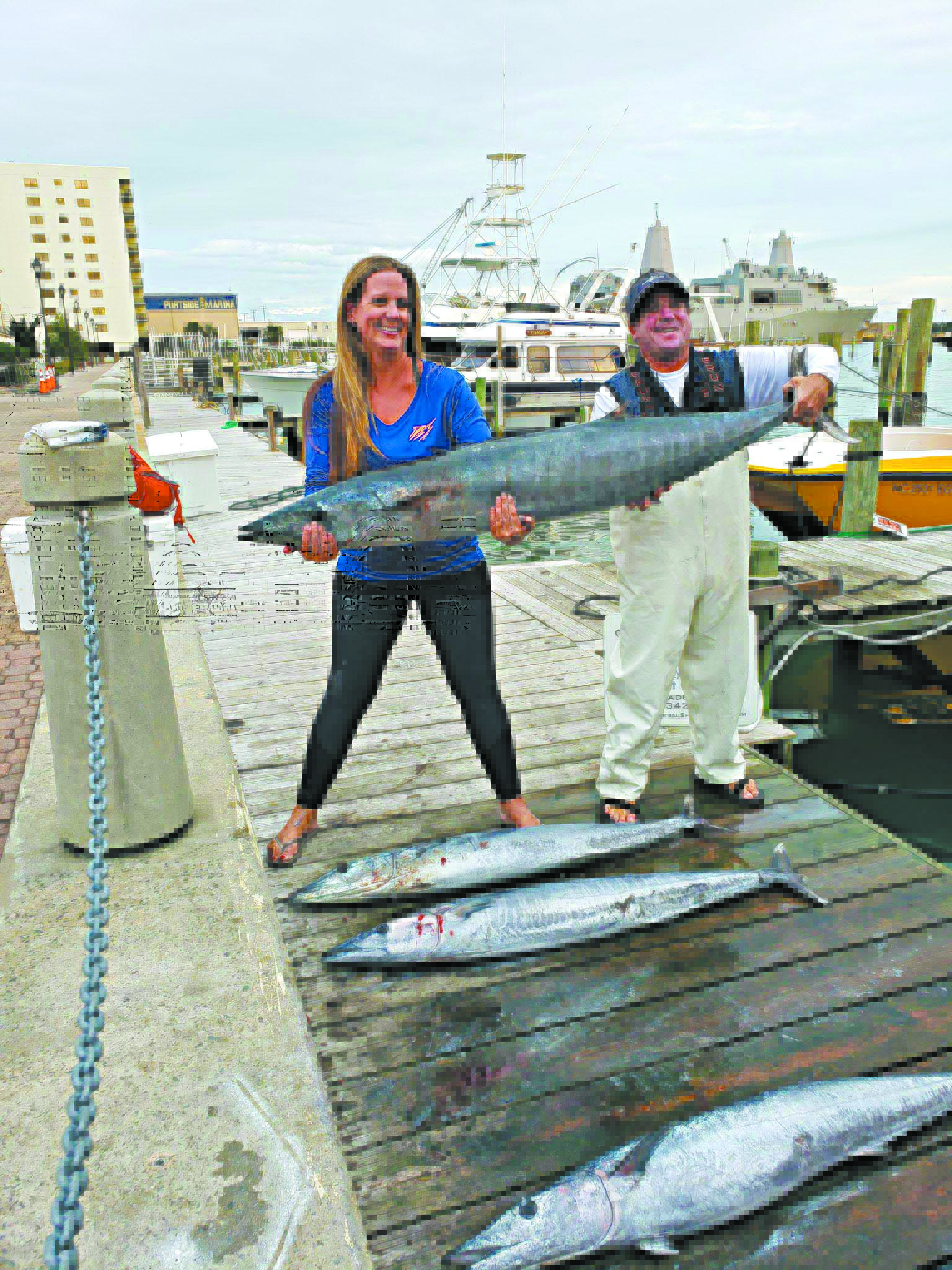 Jennifer Merritt and Brad Dishner with wahoo caught near the Swansboro Hole. They were fishing aboard “The General” out of Morehead City.

Cody, of Freeman’s Bait and Tackle, reports that speckled trout fishing has been unbelievable this season, and the cooler temperatures should bring this bite to its peak. The fish are just about anywhere, from the creeks off Newport River to around Radio Island and up to the Neuse. Soft plastics and MirrOlures are classic fall-time lures, and adding live bait to your arsenal about fills out the list of most successful rigs.

There are some slot-sized red drum holding in deeper holes near ICW bridges, and they’re hitting the same baits intended for trout. Jigging these same areas with Stingsilvers and similar glass minnow jigs has produced gray trout.

Surf anglers are catching sea mullet, red drum, bluefish, spot, and pompano while soaking baits on bottom rigs. Trout and red drum are holding in some of the deeper holes between the sandbars. A good tip this time of year is to stay active and move around if you’re not landing fish in the first holes you fish.

Chris, of Mount Maker Charters, reports that king mackerel have continued to hang around the area (with the water temperatures staying relatively warm). Windy weather, on the other hand, has lowered the amount of days that anglers have targeted them.

A few slot-sized red drum are mixed in these same holes, and many of the same lures will get strikes.

Anglers fishing live shrimp have also landed some black drum and gray trout while targeting some of the deeper holes.

Dave, at Cape Lookout Charters, reports that speckled trout fishing has been hot in creeks and around structure in Bogue and Back sounds. Soft plastics are a popular lure every fall, with anglers getting great strikes with MirrOlure MR-17s and MR-52s.

Bluefish are plentiful around the inlet and along the beachfronts.

False albacore are popping up in the areas around the inlet and near Cape Lookout. Casting small, glass minnow style jigs has been the most productive for both species when throwing to surface-feeding fish.

Red drum are mixed in the counts, and they’re staged up in similar areas as the trout, and flounder are also hitting soft plastics worked inshore around deeper structure.

Bluefish are schooled up in good numbers around the Cape, with casting jigs being most productive for anglers sight-casting to feeding schools. False albacore are showing up in the same area around Cape Lookout. They’re mixed in with the bluefish.

Trolling dead bait rigs along the beachfront out to 10 miles has been generating good numbers of king mackerel.

Tom, of Dancin’ Outlaw, reports that wahoo fishing has been very good, with some citation-class fish mixed in the daily counts.

Blackfin tuna and mahi are in the same areas out around the temperature breaks, and they’re taking the same skirted ballyhoo.

King mackerel are also part of the catch numbers, and many of the kings that are hitting that far offshore have been large (30+ lbs.).

Larry, of Oceanana Pier, reports that sea mullet fishing has been very good for anglers dropping bottom rigs with shrimp and Fishbites strips.

Some larger black drum (up to 7 lbs.) are being caught with Carolina-rigged shrimp.