Matt, of Chasin’ Tails, reports that anglers are having a great speckled trout bite, with limits of fish being caught around the Haystack marsh, Core Creek, and along the ICW through Atlantic Beach. Soft plastics such as Gulp shrimp and jerkshads, as well as Z-Man MinnowZ, worked under High Water popping corks have been a local favorite. Fishing live shrimp and minnows have been great, too, when targeting the deeper holes in the sound.

Puppy drum are in these same areas of the marsh and up into the rivers.

Black drum are being caught with fresh shrimp fished around docks and bridges. Sheepshead are holding on these same pilings, and they’re feeding on live fiddler crabs and urchins.

Spot are in the surf just south of the area. When the spots truly arrive, fishing bloodworms and Fishbites on bottom rigs will land plenty of them.

Spanish mackerel are schooled up along the beach and in the inlet. Trolling Clarkspoons and Bowed Up spoons work well for numbers, with many anglers preferring the action in casting Spanish Candy jigs. False albacore are being spotted around Cape Lookout, with anglers having success with Hogy Heavy jigs.

Offshore anglers have been experiencing a hot wahoo bite, with large fish (up to 60+ lbs.) hitting ballyhoo on Sea Witches, Nomad DTX minnows, Big Nic Dinner Bells, and Ilander Jrs. Some trips have been finding up to 20 fish per day, with most action coming from south of the Swansboro Hole up to the NE corner of the Big Rock.

Mahi, blackfin tuna, and sailfish are also all in the mix, and they’re hitting the same baits. 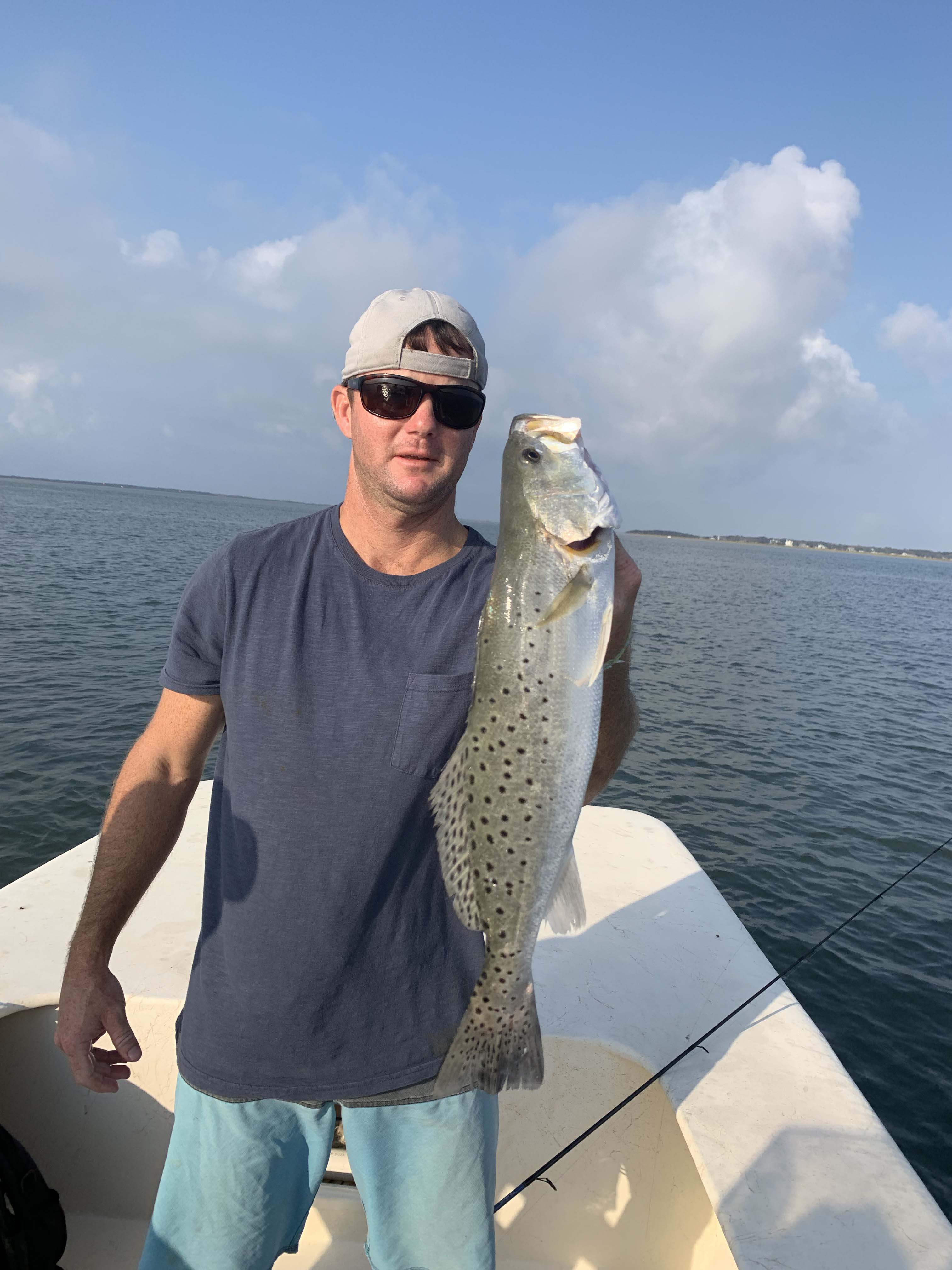 Sam Lathan, from Cary, NC, with a speckled trout that fell for a Gulp shrimp off of Harkers Island. He was fishing with Capt. Mike Brown.

Cody, of Freeman’s Bait and Tackle, reports that surf anglers have been catching consistent numbers of under-slot red drum while fishing mullet on bottom rigs.

Bluefish (up to 2.5 lbs.) are being caught on casting jigs around the inlet and down the beach towards Pine Knoll Shores.

On days with clear water in the surf, spanish mackerel are making it within casting distance. Gotcha plugs and glass minnow jigs both are productive when working these surface-feeding fish.

A couple tarpon were hooked up off Fort Macon with Carolina-rigged bait.

Live shrimp has been landing a few speckled trout at night from the piers. Bottom fishing has been producing spot and sea mullet.

Inshore anglers have been landing good numbers of speckled trout from areas around the Haystacks up into Core Creek. Red drum are in these same areas, with live baits and soft plastics landing both species.

Anglers in the turning basin are finding sea mullet and large gray trout.

Nearshore anglers have been hooking good numbers of spanish mackerel in the shipping channel. The spanish are hitting both trolled spoons and casting jigs.

False albacore have shown up, and then they were pushed off by the heat wave last week. A couple days of typical fall weather should bring them back to the beaches.

Blackfin tuna and scattered billfish are mixed in.

Chris, of Mount Maker Charters, reports that plenty of speckled trout are being caught in holes in the marsh, around docks, and on similar structure. Live shrimp and artificial baits have been having success and will continue to work well as the trout school up with cooler water temperatures.

King mackerel are starting to increase in numbers as they work their way closer to the beach. Live shad fished in depths of 35-100’ will be very productive over the next few weeks of this fall king migration.

False albacore are being spotted just off the beach, with smaller casting jigs and fly anglers finding the majority of strikes.

Bottom fishing continues to go strong, though the recent swell has anglers pushing into the 100-110’ range to locate good groups of fish.

Dave, at Cape Lookout Charters, reports that there has been good numbers of speckled trout around. Anglers are pleased to see this early showing of fish as they move with the bait into their regular fall-time locations. Deeper holes paired with areas near structure are great spots to key in on. Fishing live baits and soft plastics will both work well.

Red drum are grouped up in the marshes, and the running of finger mullet through the area should see these fish school up more and move out near the inlets to feed.

False albacore made a good showing, and though the warm front may have pushed them off, any NE winds should see the schools come right back.

Justin, at Breakday Charters, reports that speckled trout fishing has been very good, with fish staged up in deeper holes throughout the sound.

A huge number of puppy drum are mixed in with the trout (and back into the marshes). Carolina-rigged live mullet and soft plastics are both having great success in these areas.

In the inlets, anglers are seeing spanish mackerel and bluefish feeding on bait as it begins to push out into the ocean. Casting jigs worked through these feeding frenzies has been producing most of the bites.

False albacore are in the area, and this bite is anticipated to really pick up as the water cools over the next couple weeks.

Tom, of Dancin’ Outlaw, reports that large wahoo are being caught out at the break, with good numbers of fish hitting ballyhoo.

A handful of chunky blackfin tuna are mixed in, and they’re taking the same trolled baits. Gaffer-sized mahi are in the daily counts and falling for skirted baits, too.

Spot are in the area. The bite has been good just down the beach, and a NE blow should see fish being landed with bloodworms and Fishbites. Bottom fishing is also producing sea mullet and croakers.