Matt, of Chasin’ Tails, reports that speckled trout fishing is as good as it gets. Most of the well-known fall hangouts for trout are holding fish, from the Haystacks Marsh, out to the deeper holes and creeks off Core Sound. Z-Man, Gulp, and Got ‘Em soft plastics fished under High Water popping corks have been local favorites over the last few weeks. Topwater plugs are also getting good action in the early morning, and they’ve been great in helping anglers target these groups of fish. Live shrimp and mud minnows are also producing hits in the deeper holes.

Red drum are being caught in good numbers back in the marshes where they’ve schooled up to feed on bait. A few of the reds are working their way around the inlet, with Carolina-rigged live and cut baits producing better in these areas.

Gray trout are being landed in holes throughout the Turning Basin with Sam’s Glitter Jigs.

Surf anglers have been casting glass minnow style jigs (such as Stingsilvers and Spanish Candies) to surface-feeding spanish mackerel and bluefish. These fish have been active with the plentiful bait pushing out of the inlets and running down the beach.

A few false albacore are being caught from the piers and around Fort Fisher, and anglers are throwing the same casting jigs used for Spanish and blues.

Speckled trout are beginning to be caught in the surf zone, with soft plastics fished in deeper holes being the most productive.

Nearshore anglers have been landing spanish mackerel and a few king mackerel while live-baiting and slow-trolling baits off the beach. Some large kings (up to 65 lbs.) are being weighed in, and the coming days may see this bite get even better as the fish still work their way inshore.

Offshore anglers have been catching a good number of wahoo while pulling skirted ballyhoo and Nomad DTX Minnows. 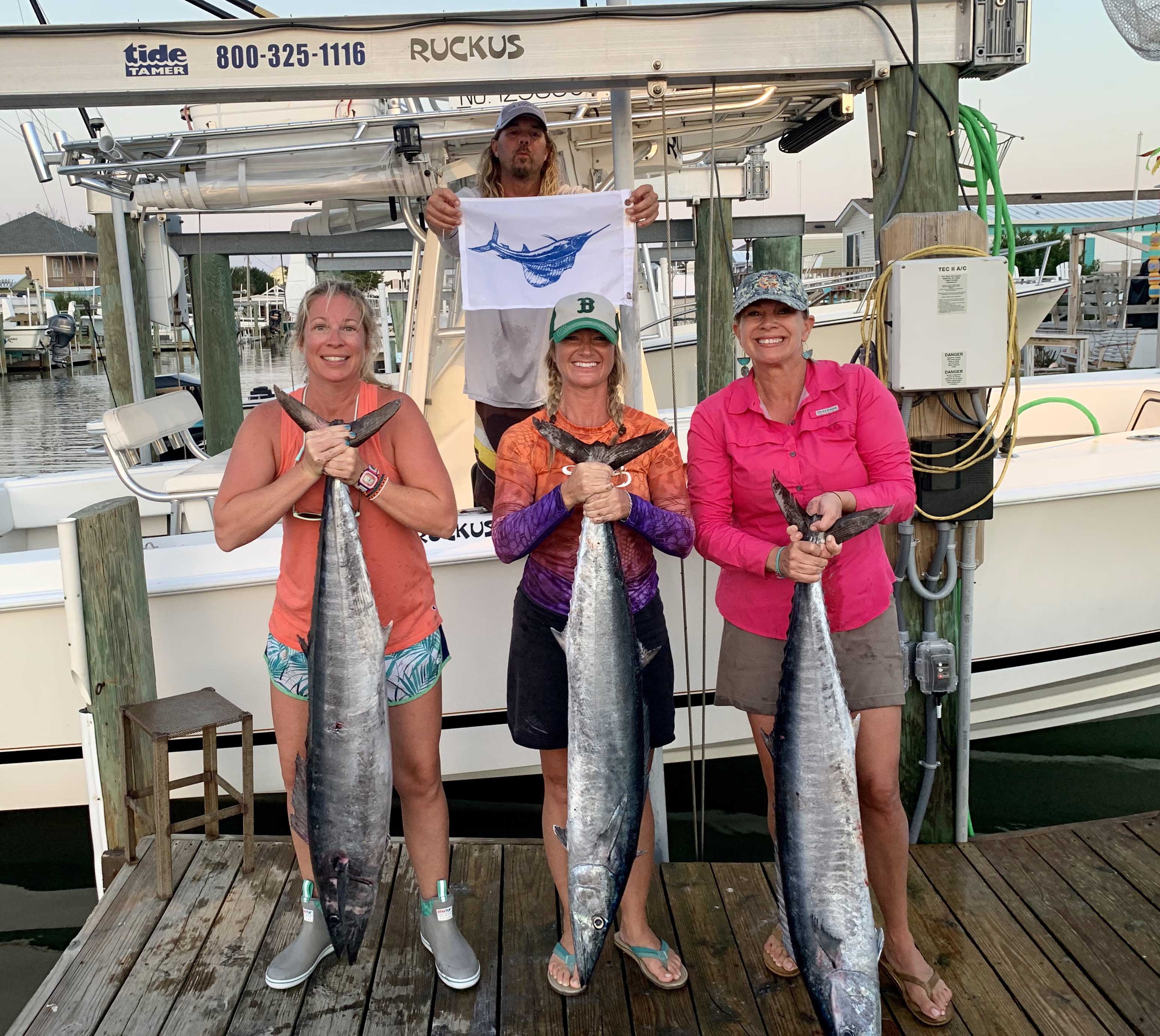 Ashley Foster, Andrea Julius, and Christine Ronco with wahoo they caught at the Big Rock. They were fishing with Wayne Ferrell.

Cody, of Freeman’s Bait and Tackle, reports that inshore anglers are catching limits of speckled trout while working the marshes and creek mouths in the area. Soft plastics and MirrOlures are both producing strikes, with anglers finding a strong topwater bite in the mornings.

Puppy drum are being caught in good numbers, with marsh areas producing a majority of bites for those fishing Carolina-rigged baits and soft plastics on lighter, 3/16 oz. jig heads.

Black drum and sea mullet are holding in deeper holes around the Turning Basin and the area’s bridges. Fresh shrimp fished on bottom rigs have been the top producing setup.

Surf anglers are catching puppy drum and bluefish on Carolina-rigged mullet, and a few speckled trout are being caught in deeper holes just past the breakers.

Offshore fishing has been good, with Stream anglers enjoying a great wahoo bite with skirted ballyhoo.

Bottom fishing has been spread over a wide area (from 12 miles out to 20 miles). Snapper, porgies, grunts, and large grouper are all being caught on cut baits. 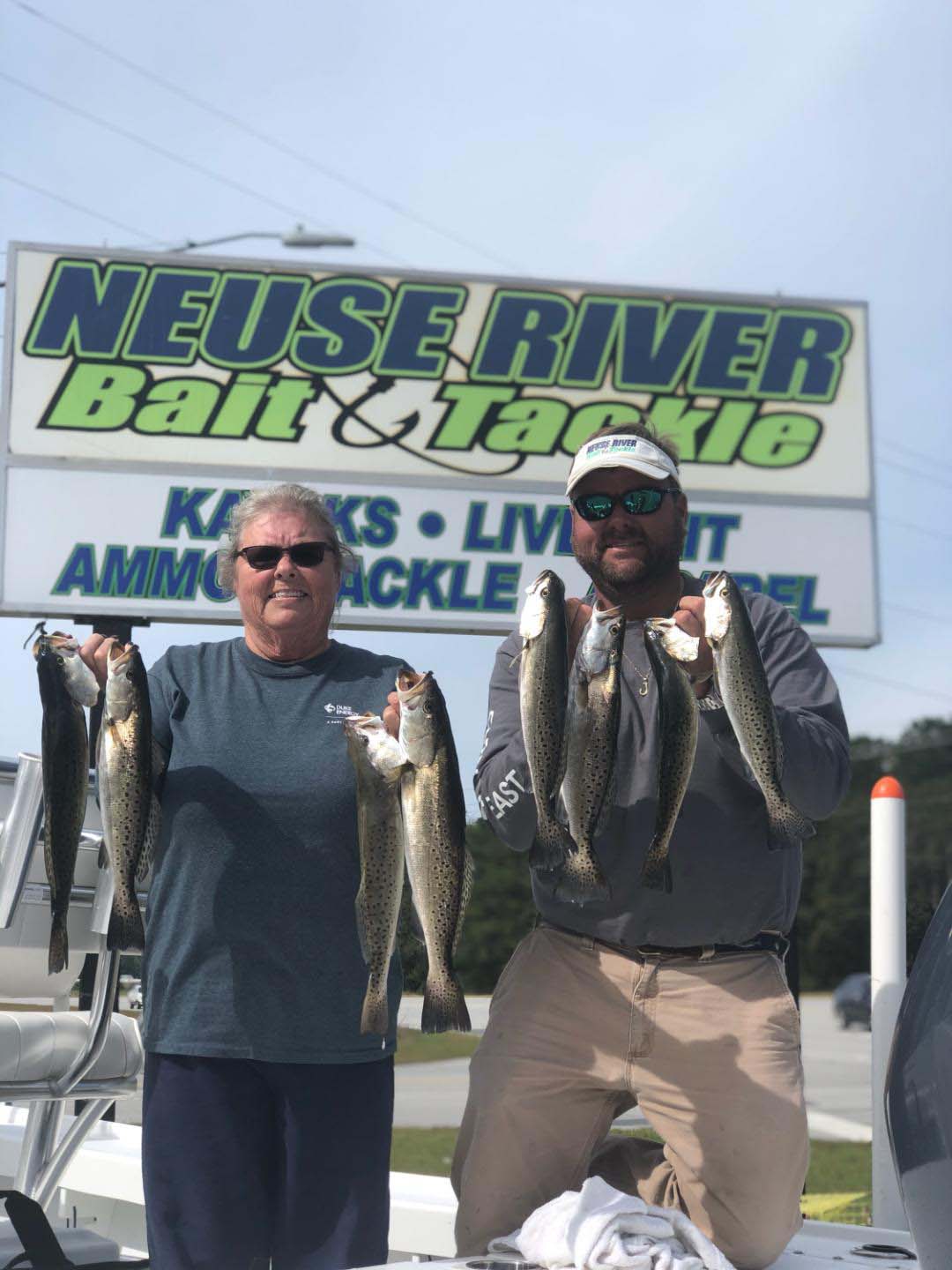 Faye Avery and Capt. D. Ashely King, of Keep Castin’ Charters, with a two-man limit of trout caught in the lower Neuse River.

King mackerel are moving onto the beaches, and anglers fishing live baits anticipate this bite only getting better in the coming weeks.

Bottom fishing has been producing grouper and snapper. The best method is dropping down cut baits in the 60-100’ range.

Inshore anglers have been experiencing a great speckled trout bite from a variety of typical fall-time haunts. Docks, deeper marsh channels, and creek mouths are all holding fish. The trout are staging in these locations to feed on the bait as it moves around the sounds and towards the inlet.

Gray trout are being caught with jigs around deeper holes in the sound and just off the beaches.

Dave, at Cape Lookout Charters, reports that speckled trout has been the hot bite throughout the area. Live baits and soft plastics fished around creek mouths, deep holes with structure, and marsh channels are great starting points when seeking out a limit of fish. Topwater plugs have worked well in the mornings, especially around some of the shallower areas.

Red drum are holding in many of these same areas, and they’re taking the same soft plastics and Carolina-rigged live bait offerings.

Speckled trout fishing has been awesome, with anglers pulling double-digit numbers of 18+” fish from deeper holes, marsh areas, and creeks off Core Sound.

Red drum are moving all over the sound as the bait pushes its way out. These fish are best targeted using soft plastics and Carolina-rigged baits.

Gaffer-sized mahi and sailfish are mixed in the counts. A few fronts passing through the area has kept many anglers from heading offshore, but the stable weather forecasted should see an increase in fish counts as the area moves into an anticipated strong fall season.

Bottom fishing has been slow with the stirred up water, but sea mullet and pinfish are still hitting shrimp.

Speckled trout are taking live baits fished in the mornings and after dark.