Matt, of Chasin’ Tails, reports that speckled trout fishing is still strong. However, with water temperatures dropping, these fish are schooling up and a bit more picky than they were in early fall. Finding their exact spot has been key, as they aren’t moving much in search of bait. Sometimes casting right on top of them is the only way to get strikes. Though numbers are down some, large fish (to the 10 lb. mark) are being landed.

Anglers are having success in areas around the Turning Basin, Cape Lookout jetty, North River, Core Creek, and up towards the Neuse River. Lure-wise, MirrOlures have been very productive, as they tend to be in the colder months. The ability to be fished slow is their greatest advantage to feeling that wintertime thump of a trout bite. Z-Man soft plastics, Gulp baits, Vudu shrimp, D.O.A. lures, and live bait are also on the list of successful baits.

These same areas have been holding sea mullet for those fishing Sam’s Glitter Rigs with shrimp.

Red drum are schooled up at Shack Point and Shark Island areas. Fishing Gulp soft plastics or cut baits on bottom rigs have been best for these fish.

Local anglers targeting bluefin have been finding large false albacore on the east side of Cape Lookout.

Stream anglers have been focusing on wahoo, though the fishing has been a bit slow. Other anglers are targeting bluefin tuna, as the season just kicked off. A few were caught on opening day, but the action has since slowed. 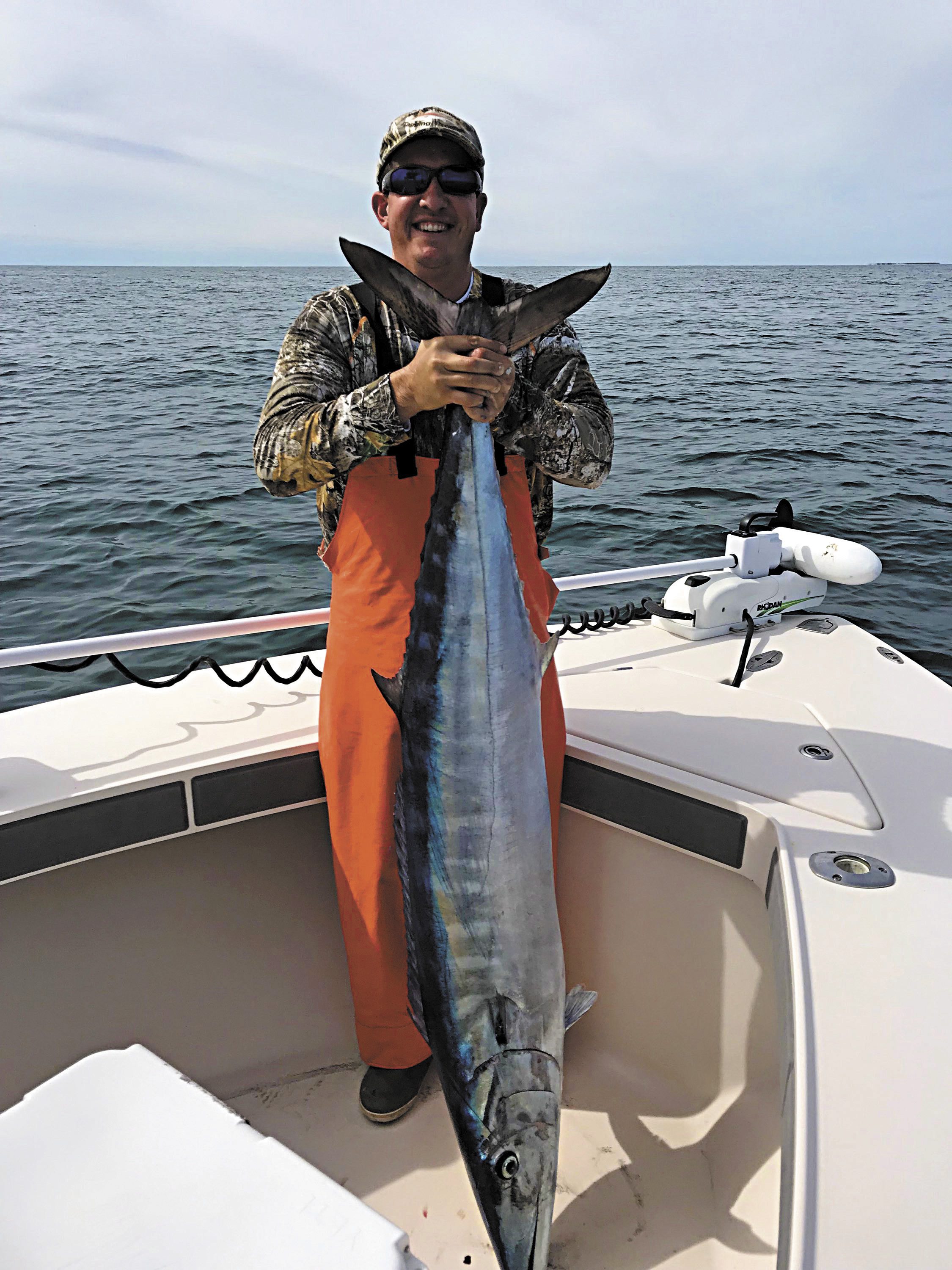 Jon Suralik with a 70 lb. wahoo caught on a live pogie. He was fishing out of Morehead City with Capt. Chris Kimrey of Mount Maker Charters.

Cody, of Freeman’s Bait and Tackle, reports that surf anglers are finding good numbers of speckled trout while fishing soft plastics in deeper holes along the beach.

Bottom fishing anglers are catching pufferfish and some sea mullet from the beach, with shrimp being the most productive bait.

A few red drum are mixed in with the other bottom fish, with most of the reds in deeper channels between the sandbars.

Inshore anglers are enjoying a great speckled trout bite throughout the area. The well-known, late fall hot spots are all producing, from jetties, to holes behind Shackleford, and out the inlet to the Cape Lookout jetties. The most productive baits have been live shrimp, MirrOlures, and soft plastic grubs on jig heads.

A few sheepshead are being caught around the railroad trestles with clams and fiddler crabs.

Offshore anglers are catching king mackerel, and some bluefin tuna have already been weighed this year.

Over the next few weeks, anglers will see speckled trout and red drum start to school up in tighter groups in areas they plan to winter over. Trout will move up creeks or out into the surf zone, and red drum will push into the surf or into large groups around the inshore marsh flats.

Taugtog will soon show up on the nearshore wrecks and areas similar to the Cape Lookout jetties. Carolina-rigged clams, shrimp, and crabs will be the best producing setup to land the ‘togs.

Chris, of Mount Maker Charters, reports that speckled trout remain the main target of inshore anglers. A healthy class of fish (to 6.5 lbs.) are being caught with a variety of live bait and soft plastics.

A few redfish are mixed in around some of these same trout holes, and they’re feeding on similar baits.

Off the beach, bottom fishing has been producing large black sea bass and grouper.

King mackerel are in this same range. They’re hitting live and dead baits, and anglers are pleased with the size of these late season fish.

Bluefin tuna are already being landed in the area, and the consistency of bites should improve through December and into January.

Dave, of Cape Lookout Charters, reports that speckled trout fishing has been good in the area. Anglers are targeting the backs of mainland creeks with MirrOlure MR series lures, and they’re finding fish grouped up in the holes and along ledges.

Red drum are being caught surf side and on some of the flats near Cape Lookout. Throwing 3/16 oz. jig heads with soft plastics has been the go-to method.

As winter settles in, anglers should expect much of the same as far as fish locations. Light weight and suspending lures are great for the trout, as they begin to only hit slow moving baits.

The red drum will school into large groups of 50+ fish. This season has seen two solid classes of fish: puppies from 17-18” and slots around 22-23”.

Justin, of Breakday Charters, reports that speckled trout fishing has been great, with anglers finding fish in the sounds and up into mainland creeks. Soft plastic grubs fished on light jig heads has been the most productive, with MirrOlures also getting strikes.

Red and black drum are staged up near docks and inshore structure, and Carolina-rigged baits have been the most productive.

Bluefin tuna are beginning to show up around the Cape, and fishing horse ballyhoo on Joe Shute’s and similar lures will be getting action over the next few weeks as water temperatures drop.

Further off the beaches, triggerfish and beeliners are holding on structure in the 30+ mile range. They’re hitting cut baits.

Tom, of Dancin’ Outlaw, reports that anglers are seeing a steady wahoo bite while pulling Sea Witch skirted ballyhoo in the Big Rock area. Wire rigged baits have been a must in keeping bite-offs to a minimum. Blackfin tuna are mixed in at the same 40 fathom depth range, and they’re also hitting skirted baits.

Anglers fishing hard bottoms with cut baits are landing a good number of triggerfish and beeliners.

Bluefin tuna have begun to show up a few miles off the beach.

Larry, of Oceanana Pier, reports that the speckled trout bite has been steady, with anglers landing fish on shrimp and soft plastics.

Bottom rigs tipped with shrimp have been landing pufferfish and the occasional black drum.

Though the pier closes at the beginning of the year, look for bottom fishing cut baits to remain the best tactic through those cold water months.