Richard, of The Reel Outdoors, reports that surf anglers are seeing good numbers of bluefish feeding on bait schools in the area. Gotcha plugs and glass minnow casting jigs are getting most of the strikes when cast to these surface-feeding schools.

Speckled trout are staged in some of the deeper holes between the sandbars. Soft plastics and MirrOlures are the most productive when worked in these areas during the early and late hours of the day.

Sea mullet, blow toads, and a few black drum are being caught by anglers fishing with bottom rigs.

Inshore anglers are landing good numbers of speckled trout with MirrOlures and soft plastics. Zoom and Z-Man baits have both been local favorites when rigged on 1/4 and 1/8 oz. jig heads. 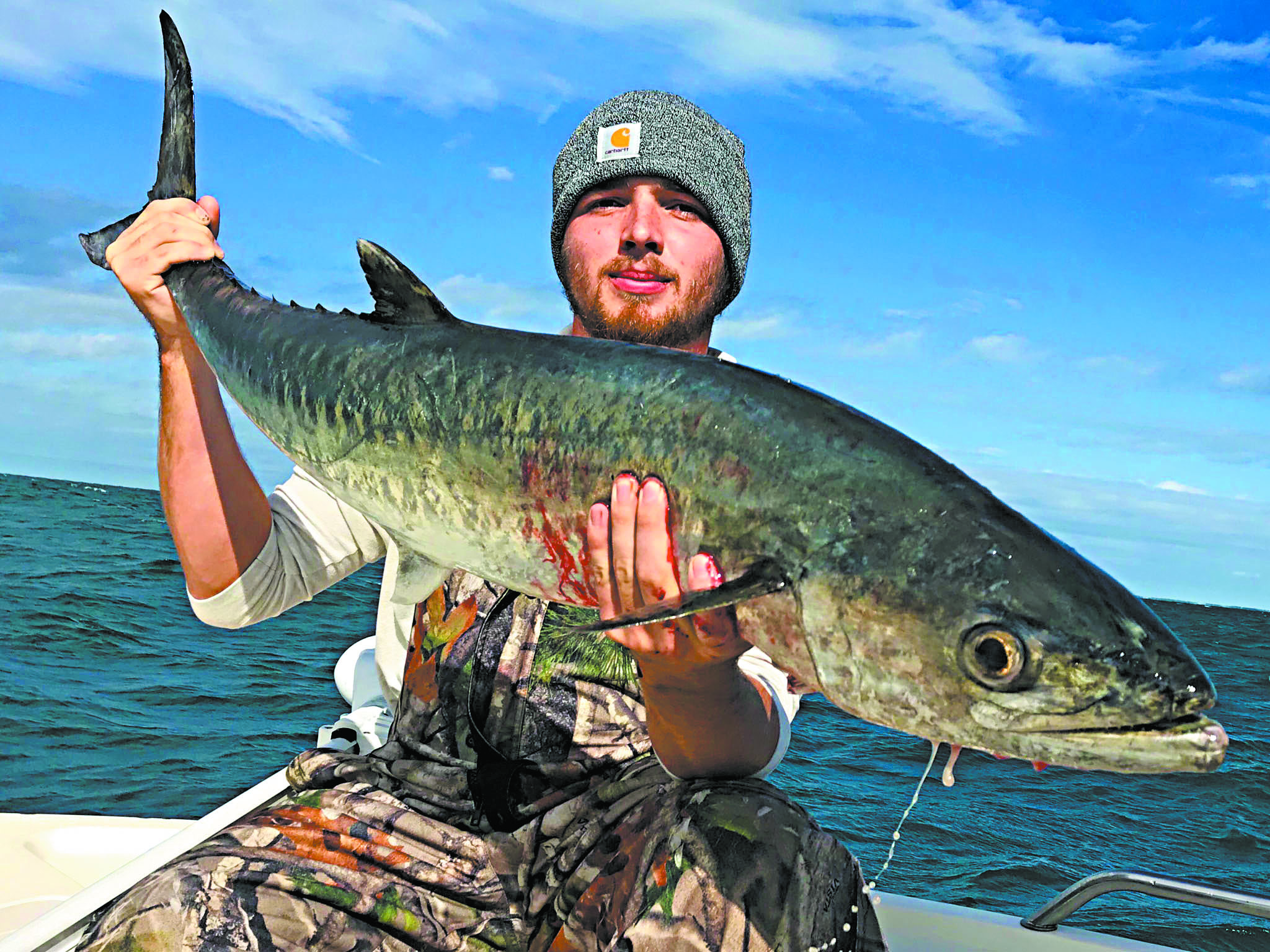 Weldon Stevenson with a 26 lb. king mackerel caught while fishing out of Morehead City with Capt. Chris Kimrey of Mount Maker Charters.

Dale, of Dudley’s Marina, reports that speckled trout fishing has been very good from the deeper holes around the inlet up into inland creeks. The fish have been responding very well to soft plastics fished under popping corks worked along the grass banks. Topwater plugs have been getting action in the early morning, though the recent cold front saw this bite slow.

Surf anglers are finding steady action while bottom fishing with shrimp and bloodworms. Sea mullet, puffers, and bluefish have been the main catches. 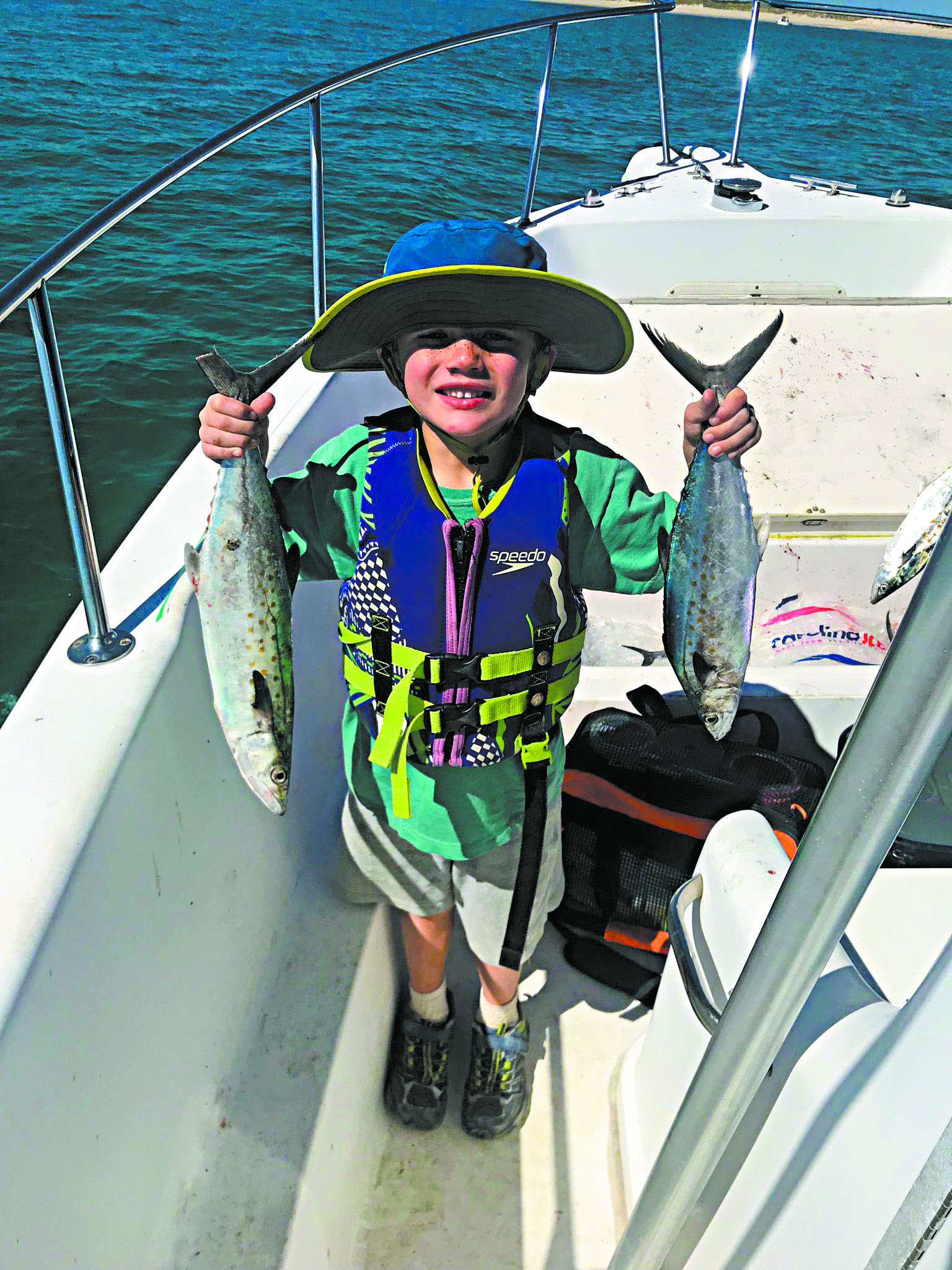 Ryan VanAken with a pair of spanish mackerel that were caught near Cape Lookout while trolling Clarkspoons.

Chris, of Pogie’s Fishing Center, reports that inshore anglers are having great success targeting the good numbers of speckled trout in the area. This cold snap has seen much of the action push over to creeks off the ICW. Soft plastics fished under corks and on lighter jig heads have been the most productive, though anglers are also reporting MirrOlures getting good strikes, too.

A few puppy drum are in the marshes, with most of the reds working their way into the inlet and surf zone (following the mullet).

Surf anglers are catching good numbers of bluefish with casting jigs. Bottom fishing the surf with shrimp is producing sea mullet and black drum, with most of both species being in deep holes just off the sand.

Rob, of Sandbar Safari Charters, reports that the speckled trout bite has been excellent in the sound and near the inlets. Great numbers of medium-sized fish (15-20”) are hitting live mullet and shrimp fished on the bottom and under corks. Zoom Fluke soft plastics are also very productive when finding these groups of fish. In the coming weeks, anglers will start to notice spike-sized trout holding in these areas, as the larger fish push up into the mainland creeks and rivers.

Smaller red drum are being caught in backwater marshes and around docks, with scented soft plastics and Carolina-rigged live bait producing best.

The surf zone and inlet shoals are loaded with slot to over-slot red drum, and they’re hitting just about any baits thrown in front of them.

False albacore are just off the beaches. They’re being caught by anglers sight-casting Stingsilvers to surface-feeding fish.

Johnathan, of On Point Charters, reports that speckled trout fishing has been great in recent weeks. Anglers have had a lot of success when targeting the deeper creeks around the inlet. Soft plastics fished on Fathom jig heads has been the most productive when cast along the grass banks and around deeper oyster beds. MirrOlures are also productive and are a great option on the colder days when fish are staged in the mid-water column. Live shrimp are a “trout candy,” and though they will catch good numbers of fish, many of the smaller inshore species will happily take the free meal as well. Anglers should watch for the trout to begin to move into their late fall pattern as cold weather streaks continue to hit. The fish will begin to move way up the mainland creeks and rivers seeking out winter-time haunts.

Bobby, of Teezher Charters, reports that king mackerel fishing has been great for anglers pulling live pogies and cigar minnows on dead bait rigs. Along the beaches and out to structure in the 12 mile range have all been productive areas.

Keeping an eye out for schools of false albacore has been a good idea, as cooler water temperatures have pushed the fish back towards the beach. Smaller casting jigs are the most productive lures when spotting these surface-feeding fish.

Inshore, the action has been all about the speckled trout bite. Limits of fish are being caught by anglers working creeks off the ICW.

Josh, of Liquid Fire Sportfishing, reports that king mackerel fishing has been very good, with fish scattered from the beaches out to ledges and rocks around 10 miles. Trolling dead bait rigs and live baits have both been productive.

Offshore anglers have been finding good numbers of wahoo and scattered blackfin tuna while pulling skirted ballyhoo out around temperature breaks near the Swansboro Hole and up to the Big Rock area.

Teresa, of Bogue Inlet Pier, reports that king mackerel fishing has been great, with as many as 13 fish (up to 31 lbs.) landed in one day.

Spanish mackerel are still being caught with casting jigs, though this bite should be coming to a close with water temperatures rapidly dropping. Bluefish, on the other hand, will continue to feed on bait schools running down the beach. Gotcha plugs and cut baits are most productive when targeting the blues.

Carolina-rigged cut baits have been landing scattered red drum, and bottom fishing with shrimp has been producing sea mullet, pompano, spots, and sheepshead.

A few speckled trout are being caught, with most being landed early and late in the day.