Patrick, of Captain Smiley Fishing Charters, reports that inshore water temperatures are in the mid to upper-80s. The water has been murky, but the action hasn’t been slowed.

There’s a healthy shrimp population in the area, which has led to a great black drum bite. The best action has been on the falling tide near docks and along deeper ledges in about 12’ of water, and the drum coming in have been up to 8 lbs.

Redfish have also been enjoying the live shrimp, especially under a popping cork. They can be found on the flats during a falling tide, though most have been either under- or over-slot.

A few flounder have been caught here and there on live finger mullet and new penny Gulp shrimp and swimming minnows. Look for the flatties on the low to rising tide in about 5-10’ of water.

Speckled trout have been small and reluctant to bite, but the ones that are being caught are coming from creek mouths or oyster bed edges. Live or Vudu shrimp under a popping cork should get the specks’ attention. 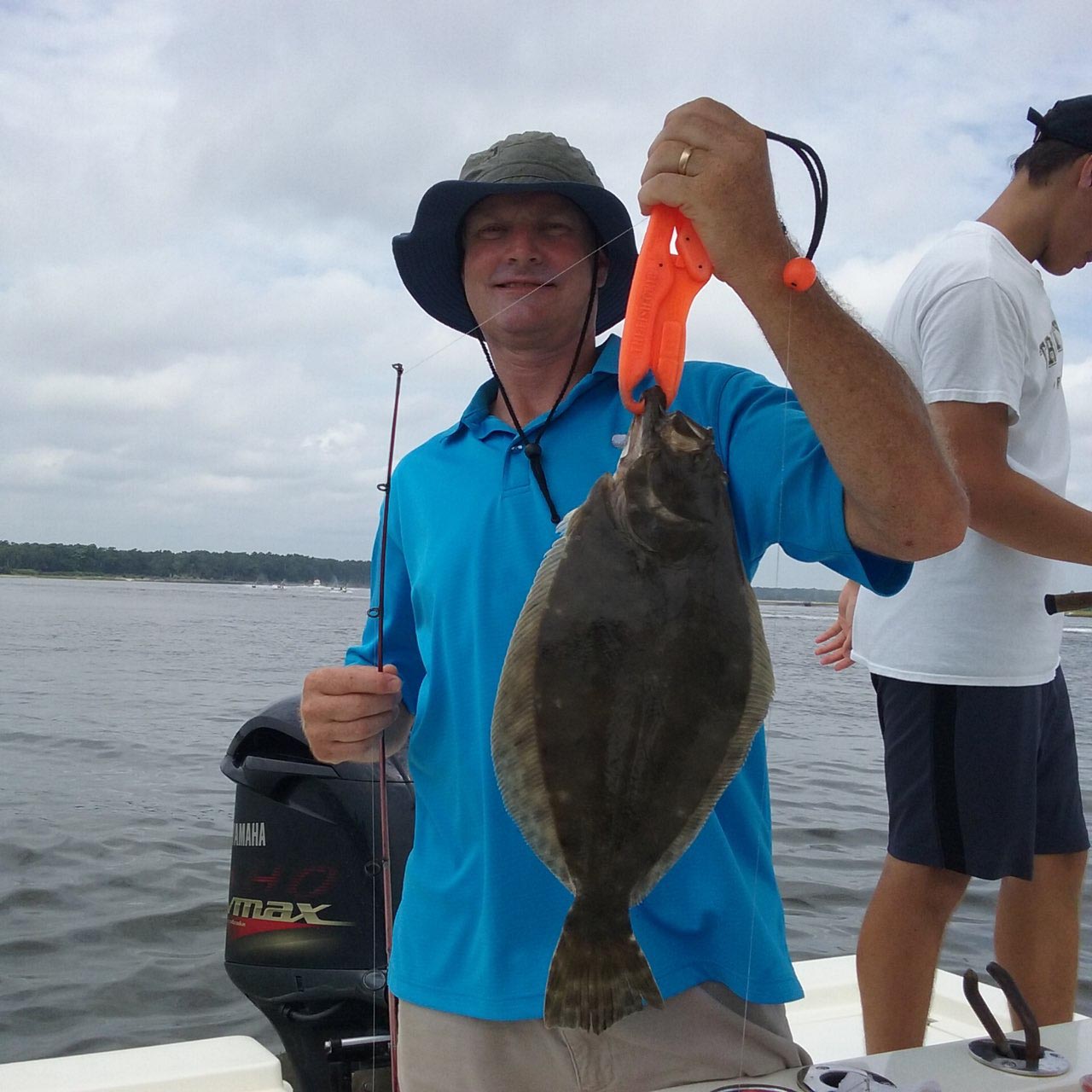 Chris Smith, from Connecticut, with a flounder that fell for a Gulp swimbait. He was fishing with Capt. Bob Strange, of Strange Magic Fishing Charters.

Bob, of Strange Magic Fishing Charters, reports that trout are being caught in increasing numbers, especially around oyster bars and creek choke points. A live shrimp paired with a popping cork is the way to hunt for the specks, but artificials have made the difference at times, too.

Flounder are being caught with live minnows near docks and creek holes, especially on a falling tide. Red and black drum are also hanging around the docks, and with slightly lower water temperatures, the action has turned on a bit more. Live and fresh shrimp seem to work best.

Keep in mind that fish like structure, safety, and a good food source. If you can find a spot with all three, you’ll be bringing fish over the rails in no time. 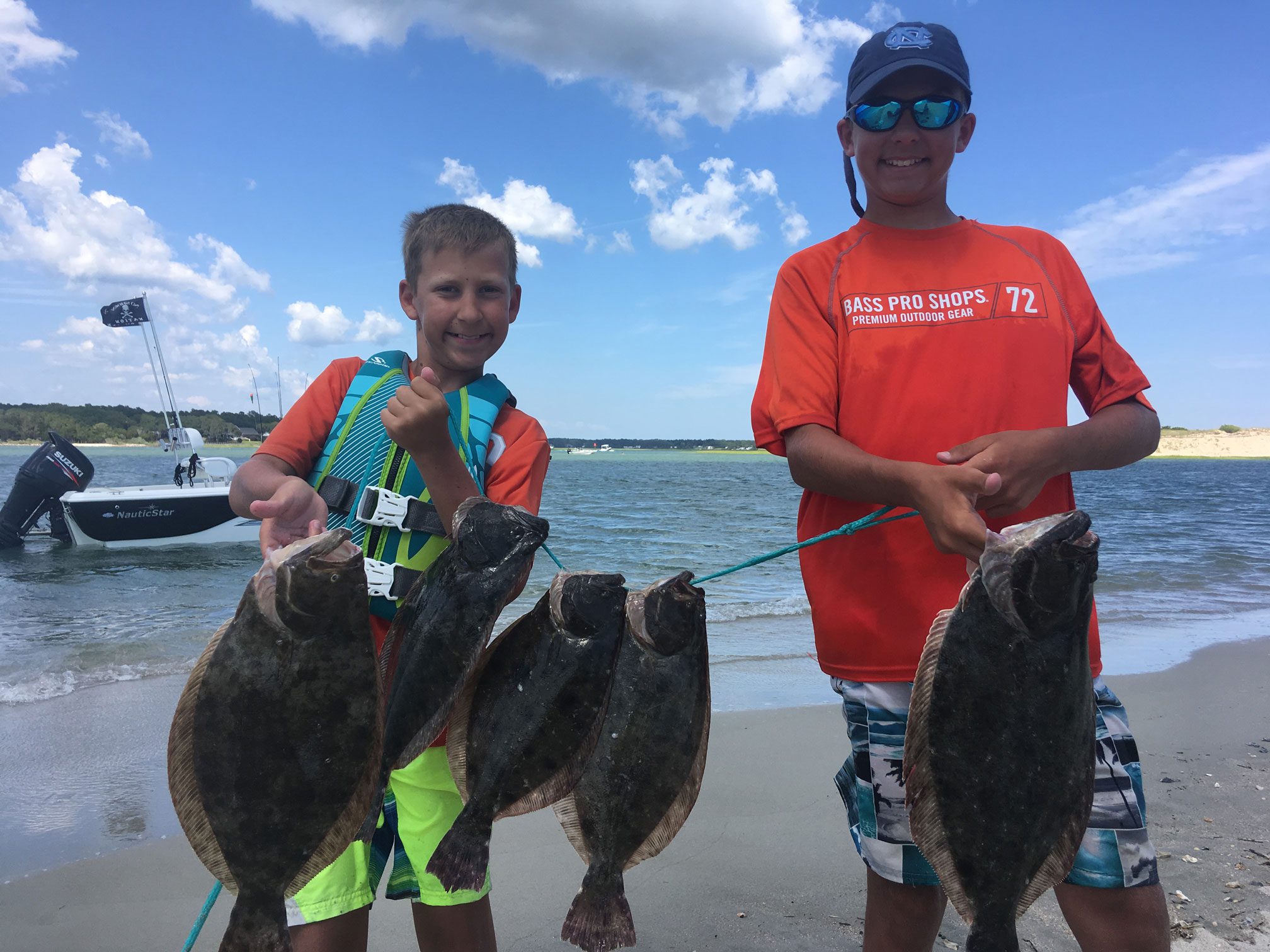 Joe and Josh Ward, of Holly Springs, NC, with a few flounder they caught using fresh shrimp and finger mullet while fishing with their Grandpa at AR-420

Kyle, of Speckulator Charters, reports that the unsettled weather over the past couple weeks has caused inshore waters to be a bit stirred up, which in turn often makes the inshore fishing a bit tougher than it has to be. Despite conditions, anglers have continued to find consistent flounder fishing throughout the area’s inshore waters. The nearshore wrecks and artificial reefs have continued to produce flounder as well, as long as you find some clean water to fish in. Live finger mullet and menhaden continue to be the top producers.

The redfish/red drum action continues to be very consistent. Reds are being caught in a variety of areas, from way back in the creeks to out on the nearshore wrecks/artificial reefs.  The redfish action should get even better as fall approaches, and late September through late October is always the magical time when the “bull” reds show up in the area Live or fresh cut mullet or menhaden continues to produce the majority of the redfish bites.

The speckled trout fishing had slowed a bit, even though a few continue to be caught. They, too, will begin to bite a bit better once the water cools off a bit. Anglers have been catching the gray trout quite well on the same nearshore structure that has been producing most of the flounder.  Most of the grays are being caught on live mullet that have been dropped to the bottom for a flounder, but the grays will also bite jigging spoons/diamond jigs quite well, especially once a concentration of them has been located.

Larry, of Voyager Fishing Charters, reports that plenty of big spanish and barracuda are hanging around right outside of the inlet.

In the 5-10 mile range (in about 40-60’ of water), you can expect to find a lot of black sea bass, small porgies, and Atlantic sharpnose sharks. Cut squid and sardines seem to be working the best.

At around 25 miles, trolling Drone spoons will hook up with some nice king mackerel and big bonita.

On the continental shelf (about 49 miles out of Little River Inlet), bottom fishing has been phenomenal, with plenty of beeliners, scamps, triggers, grunts, porgies, and amberjacks all filling the boxes of every boat that’s been out.

Cameron, of Little River Fishing Fleet, reports that plenty of blacktip and spinner sharks are being caught just off the beach.

Outside the inlet, fishing has been excellent for spanish mackerel, and there are a ton of barracuda swimming on the nearshore wrecks.

Trolling in the 35 mile range has produced king mackerel in the 20 lb. class, as well as plenty of bonita and amberjacks.

About 50 miles offshore of Little River Inlet in 120’ of water, bottom fishing is producing vermilion snappers, a couple of American red snappers, lots of triggers, big porgies, and scamp grouper. Some nice kings have even been hitting sardines on the drift lines.

On the troll, wahoo and blackfin tuna are being caught at the break.

Steve, of Cherry Grove Pier, reports that the spanish bite has slowed down a bit, but those plugging early in the morning have landed a few.