Patrick, of Captain Smiley Fishing Charters, reports that all the big summer species are biting inshore, though some days the fish can be harder to find than others.

Over-slot reds have been swimming in the deeper channels and, during high tide stages, can be found either in the grass or right on the edge of it. Live mullet or soaking cut mullet have both been getting attention when fished right on the bottom.

Black drum have been plentiful in the ICW, and they can be caught with live or dead shrimp on the bottom, especially during low tide.

Flounder measuring between 16-18” have been around, especially in the hour before and the hour after high tide. Live finger mullet on a 1/4 oz. jig head should get bites.

There is a good population of speckled trout chewing in area waters. While a lot of them have been small, plenty of 15-18” fish have been caught as well. If the tide is right and you know where to look, you should have no problem bringing some keepers over the rails when fishing with live shrimp under popping corks or Vudu/Gulp shrimp on 1/4 oz. jig heads. 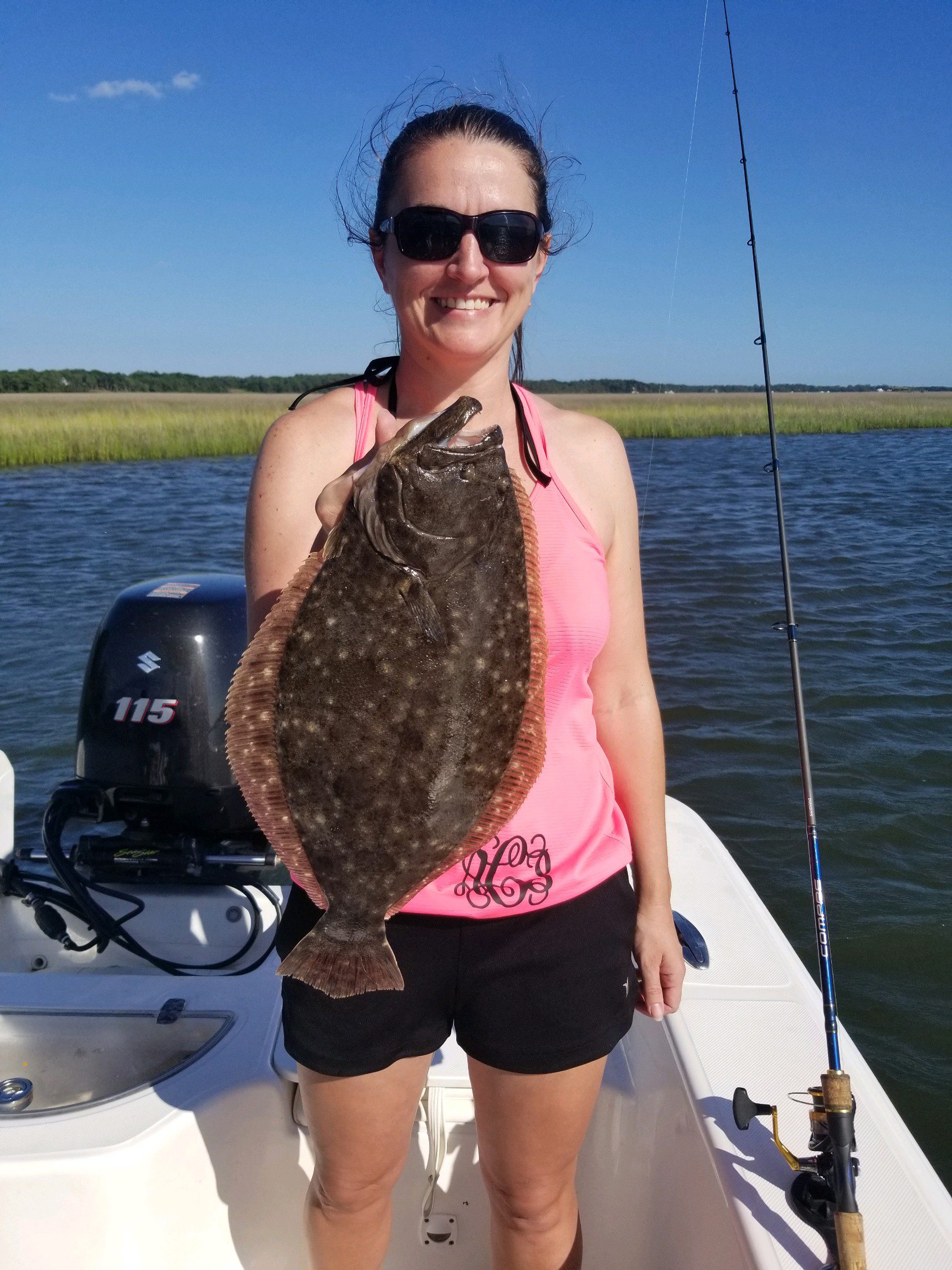 Amber Coleman, from Tabor City, NC, with a 20” flounder that fell for a bucktail rigged with a Gulp swimming mullet. She was fishing out of Holden Beach near the Lockwood Folly River.

Bob, of Strange Magic Fishing Charters, reports that the black drum bite is on. Fresh shrimp seems to work best, as live shrimp on the bottom just gets eaten by lots of pinfish and undesirables. Look for the black drum around docks and in deep creek holes, and the lower tides will concentrate the fish even more.

The trout bite has been better recently, with live shrimp or minnows under popping corks, as well as Gulp soft plastics, all fooling the specks. Early morning topwaters are also producing.

Red drum have been a little bashful lately, especially with all the boat traffic. Look for the reds in out of the way places, such as far back in the creeks, for the best success. Another good place to target the reds, though, is grass banks. If you have a trolling motor, cruise up and down those grassy areas to cover more ground and increase your chances of finding the fish. Live shrimp on corks is the go to setup (and will keep you from getting hung up on the bottom).

Flounder are hitting Gulp baits and minnows fished on the bottom. For the flatties, work docks at higher tides and then creek holes at lower tides. Also remember that for flounder it’s usually best practice to keep moving and searching. 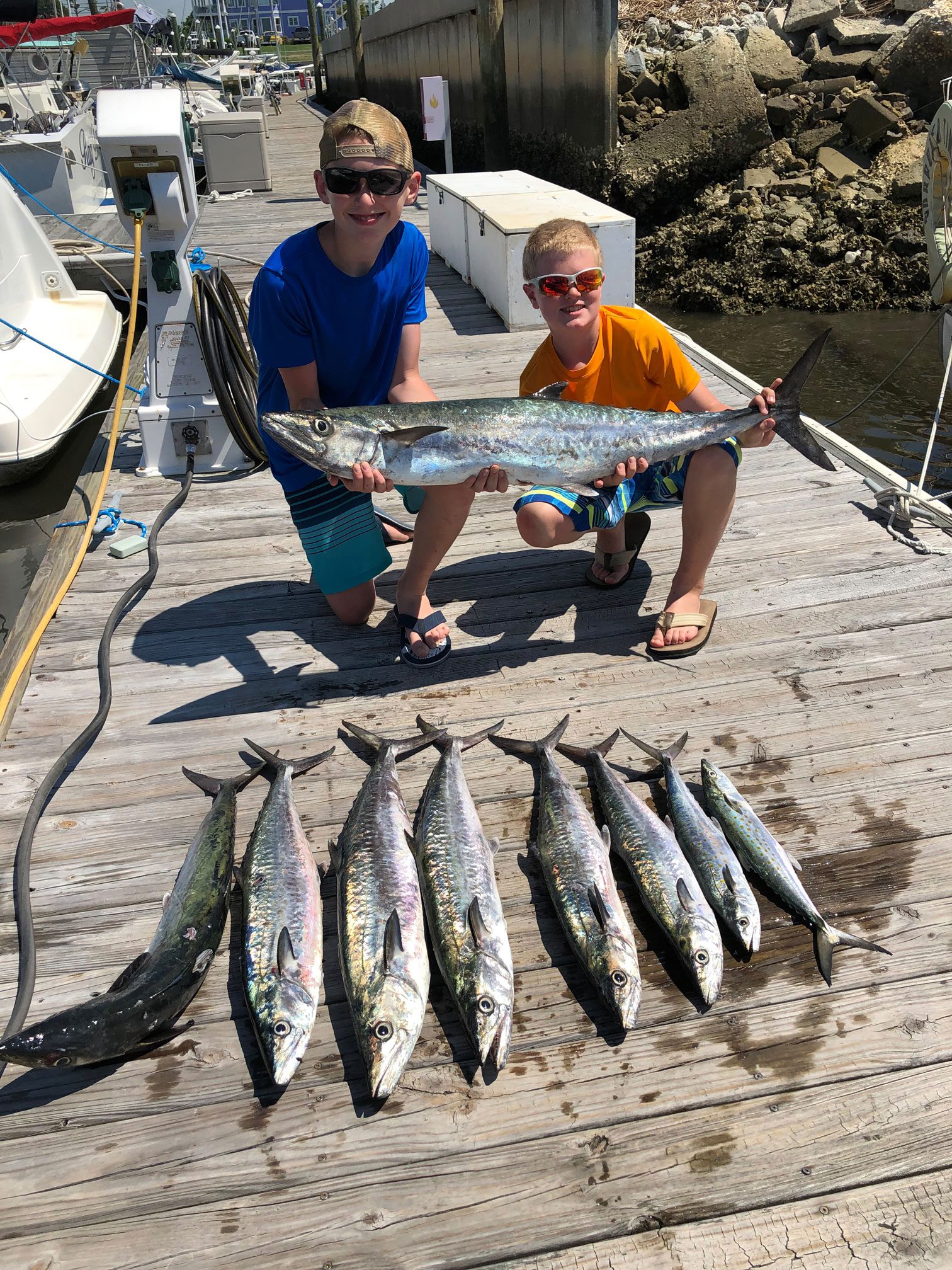 Jackson and Tucker Barfield (ages 13 and 10), of Denver, NC, showing off an assortment of kings and spanish they caught off of Oak Island while trolling cigar minnows.

Larry, of Voyager Fishing Charters, reports that nearshore waters are holding spanish mackerel, barracuda, and lots of big sharks (mostly blacktips and spinners). In the 8-10 mile range outside of the inlet, there have been plenty of black sea bass, porgies, and small sharks.

Offshore trolling in the 25 mile range has produced big numbers of kings on Drone spoons and rigged ballyhoo, with some bonita and barracuda mixed in as well.

On the bottom in the same range, amberjack fishing has been hot.

Michael, of Cherry Grove Pier, reports that a lot of croakers are coming in. Whiting, keeper black drum, spadefish, keeper speckled trout, and bluefish are all in the mix, too. Flounder have also finally decided to show up.

Live shrimp, cut bait, and bloodworms are all catching the variety of species that are active right now. The rising tide has been the best time to fish, but anglers targeting black drum should be fishing in the suds no matter what.