Patrick, of Captain Smiley Fishing Charters, reports that as temperatures have gotten consistently warmer, the action has really improved. Small shrimp are abundant and can be easily cast-netted, and the best places to look for them has been at the jetties. Rigging the shrimp on a split shot rig with a size 4 hook and casting into the rocks has produced a mixed bag of species, including redfish, black drum, trout, bluefish, and even spanish mackerel.
In the ICW, there are some nice trout (4-5 lbs.) beingcaught on topwater plugs (like Spooks and MirrOlures) fished over shallow water in early mornings. Bluefish up to about 20” can be caught the same way. After the sun gets up a little, then fishing the ledges with shrimp has been the most effective for the trout.
Besides at the jetties, fishing for reds in grass flats at higher tides has been productive. Find small open spots in the thick stuff, and soak cut chunks of mullet. Just like it would for a catfish, the smell will bring the fish in.
Smaller black drum are also biting well around docks in the ICW.
While they are still not seeing the numbers of flounder they would like, live mud minnows, Gulp jerk shads, and shrimp in new penny color are picking up some flatfish.
Small stripers are around and in the ICW.
Cobia are here and biting around 6-10 miles out at the nearshore reefs. Using sabiki rigs to jig up small reef baitfish (like pinfish) has produced on the cobia. Spadefish are also around by the thousands, but they have been difficult to get to bite so far. 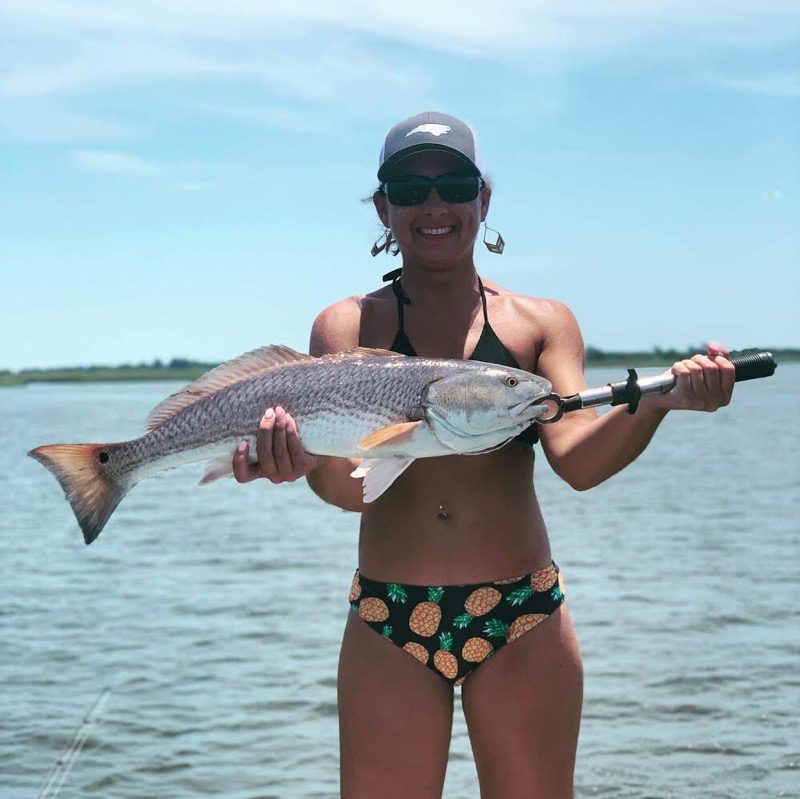 Cheyenne Harrelson, of Atlanta, GA, with an upper-slot red drum she caught while fishing near Sunset Beach.

Bob, of Strange Magic Fishing Charters, reports that the action has slowed down for flounder and trout as a result of all the record heat. Mud minnows are still the go to bait, especially on popping corks near structure.
Bluefish are around the same places, and they will go for just about anything you throw.
For trout, the ICW shell banks have been producing, and free spooling a cork rig with the current allows the best opportunity. Just make sure to keep contact with your cork, as a limp line makes it hard for a good hookset. Casting near the shorelines has been the best tactic for reeling in a flounder. The flatties have been around creek mouths and docks as well.
Red and black drum are being caught near docks of all kinds. Fresh shrimp on the bottom is the go to. Remember, after a few casts without success, move on. Either the fish are not there or they are not biting. Don’t waste time, even in your favorite honey hole.

Larry, of Voyager Fishing Charters, reports that the Gulf Stream is producing great numbers of fish. The best action has been trolling near the Blackjack, where larger mahi are coming in.
In addition, anglers are connecting with vermilion snapper, scamp and gag grouper, grunts, triggerfish, porgies, big sea bass, and a few cobia. Squid and cigar minnows have been the best baits for the majority of these fish.
Nearshore fishing is dominated by nice sea bass on the bottom, and trolling Clarkspoons around the 3 Mile reef outside of Little River Inlet has brought plenty of spanish mackerel to the deck. 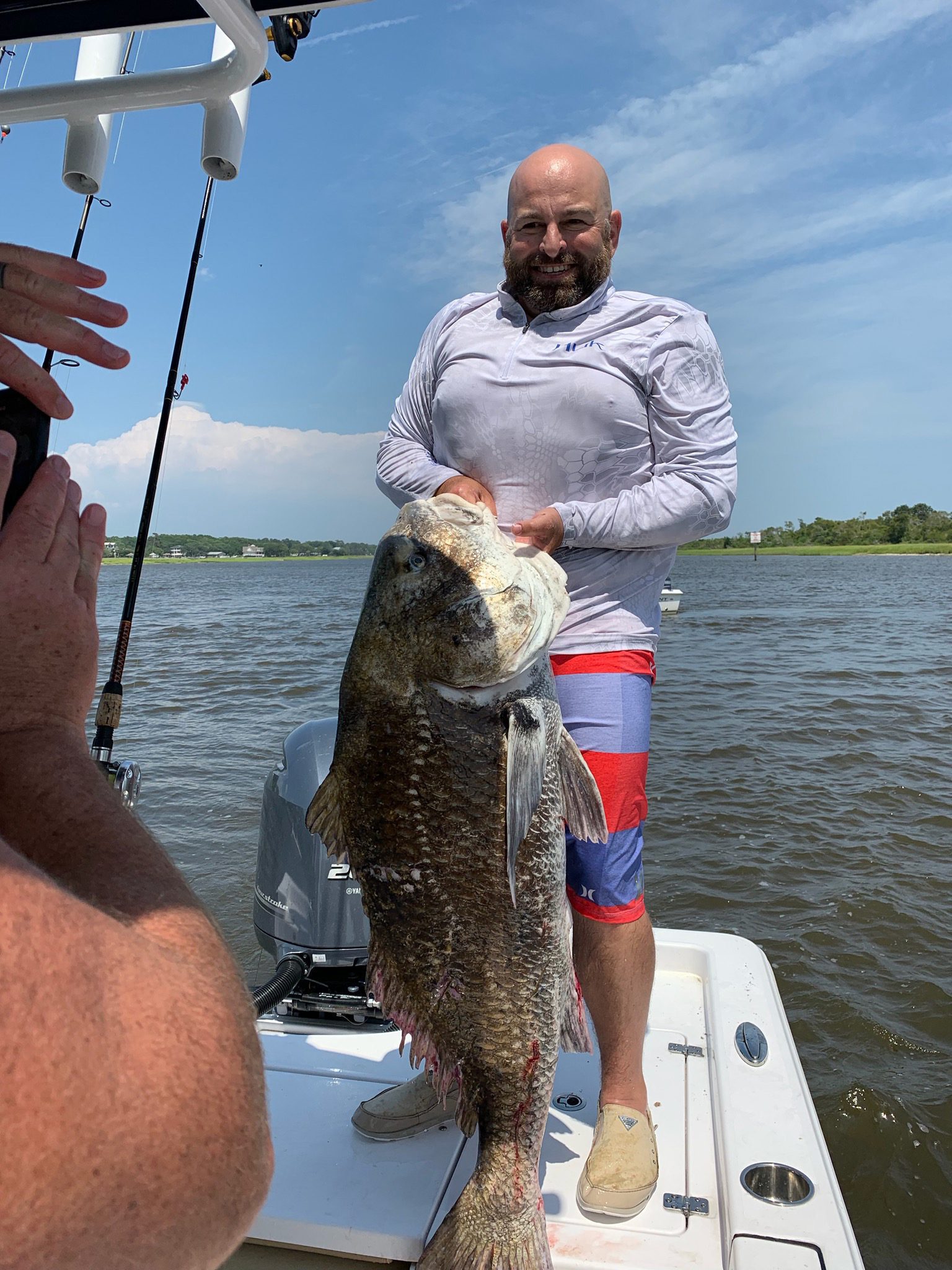 Roger Moore with a black drum he caught and released at the Sunset Beach Bridge on a 3/4 oz. jig head and a Z-Man scented paddler.

Cameron, of Little River Fish Fleet, reports that bottom fishing nearshore is great, with limits of beeliners, sea bass, triggerfish, gags, and scamps. Sardines and cigar minnows are the best option. Blacktips, spinners, and tiger sharks have also been caught (and released). And the nearshore bite is also producing larger flounder (keeper-sized and bigger). The flatfish are being brought in on both bucktails and live bait.
Around 30 miles out, bottom fishing is producing large sea bass, grunts, flounder, and plenty of sharks.
Offshore trolling has been generating plenty of mahi. Trolling white and red skirted ballyhoo and black and purple skirted ballyhoo have both been regular producers. An occasional wahoo are still being caught as well.

Perry, of Cherry Grove Pier, reports that whiting and blues are both being caught off the pier, and there have also been spanish (up to 17+”) caught. Black drum are being brought in, including one around 27”, but kings and flounder have been absent.