Patrick, of Captain Smiley Fishing Charters, reports that speckled trout fishing has started to pick up with the recent cold front. Live shrimp under float rigs and MirrOlures have been the go to baits.

Redfish are also biting well, particularly around grass and oyster beds. They can be caught on both Gulp baits and cut mullet. Most of the fish have been found in fairly shallow water.

Black drum are being hooked on fresh or live shrimp fished around docks on the incoming tide. A few large reds are still hanging around the jetties and nearshore structure, and fishing with large live and cut baits has produced best. 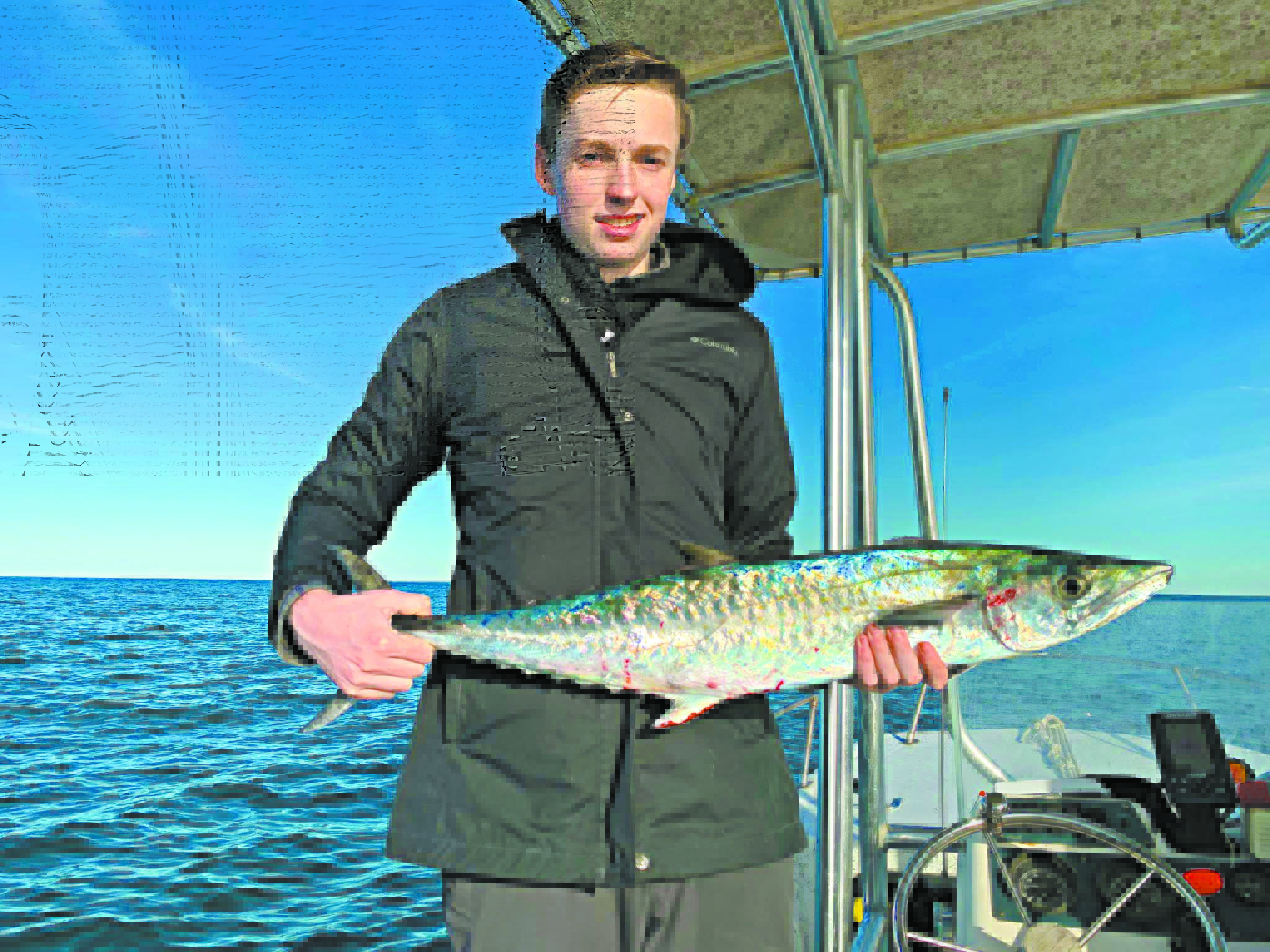 Cole Sanders, of Raleigh, NC, with a king mackerel caught at the 90/90 off of Ocean Isle Beach while trolling cigar minnows.

Bob, of Strange Magic Fishing Charters, reports that the red drum and trout bite has been fantastic over the past few weeks, and while both species are falling for just about any bait you throw to them, Gulp and Z-Man paddle baits on jig heads are probably the best producers. MirrOlures are also working well.

On high tidal stages, you’ll have more success working the shoreline, while deeper holes will be more effective at low tide. Shell banks transitioning to grass are also great places to look for both species.

Black drum are falling for both fresh shrimp and live shrimp, if you can find live shrimp. Look for the black drum near older docks with creeks or drains nearby.

Flounder are still around, but not for much longer, as they’ll be making their way to the ocean for the winter soon. Intercept them at creek mouths, especially on a falling tide, with mud minnows on a Carolina rig or Gulp on a jig head. 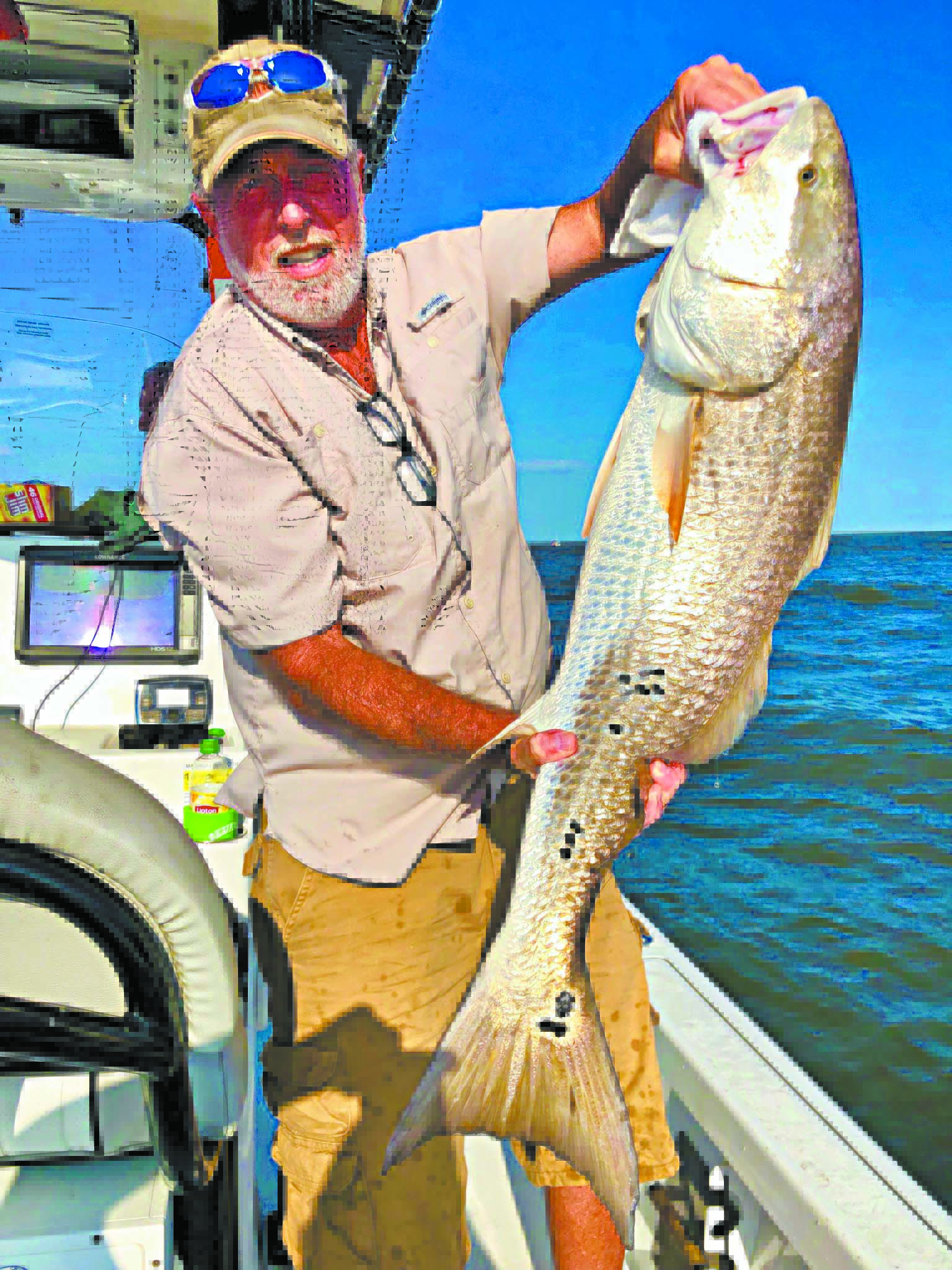 Mike Miller with a red drum caught in the mouth of Little River.

Kyle, of Speckulator Inshore Fishing Charters, reports that speckled trout fishing has heated up in the area. Anglers have seen an increase in quality, with most fish being in the 16-20” range (with a few larger fish in the mix). Live shrimp and swimbaits have been the top producers.

Good numbers of red drum are holding in the waterway and creeks. Most fish have been in the 16-20” range. Cut shrimp and cut mullet have worked best for the reds. A few black drum are also in the mix with the reds. The black drum have fallen primarily for cut shrimp fished on the bottom.

Anglers are still finding a few flounder in the area, and most can be fooled with a live finger mullet hooked on a Carolina rig.

Larry, of Voyager Fishing Charters, reports that the Gulf Stream has produced good numbers of fish. Anglers have landed red snapper, beeliners, triggerfish, and scamp grouper while bottom fishing. On the drift lines, a few dolphin and kings have been hooked.

Cameron, of Little River Fishing Fleet, reports that the red drum fishing has started to pick up inshore. Good numbers of slot and over-slot fish have been found in the shallow bays and creeks, and soft plastics like Vudu shrimp and Trout Tricks have worked best.

The speckled trout fishing has also fired up. Most fish are holding near marsh points and creek mouths. Anglers targeting the higher part of the tide with soft plastics and live shrimp under a slip float rig have regularly landed limits of fish.

A few flounder also continue to hang around in some of the same areas, with fish in the 16-20” range being landed while trout fishing.

Michael, of Cherry Grove Pier, reports that anglers plugging from the pier have landed high numbers of bluefish and a few spanish. Most of both species have hit Gotcha plugs and Stingsilvers.

Those fishing the bottom with cut shrimp and bloodworms have landed whiting, croaker, and spots.