Patrick, of Captain Smiley Fishing Charters, reports that inshore surface water temperatures in the morning on the north end of the Grand Strand are still in the mid-70s. There are finger mullet around, but off the beaches, menhaden are the most prolific baitfish.

Bull red drum are still being caught in the inlet on live, fresh cut, or even frozen menhaden, and the reds will also eat mullet or most any other live or fresh cut bait. The incoming tide has been the best time to target them, and high slack tide has also been productive.

There are lots of big red drum at the jetties, and while they can

Smaller reds can be caught casting live mullet or live shrimp on a split shot rig or under a float into the jetty rocks, and there have also been plenty of 12-17” redfish caught inshore around grass and oyster beds. Cut shrimp, live shrimp, finger mullet, and Gulp baits are all working for the inshore reds.

The trout bite is improving, but it’s still not as good as it should get. Currently the trout are being caught on live shrimp fished along inshore drops and oyster beds in areas with moving current. They are also being caught with shrimp fished on a split shot rig at the jetties.

There has been good flounder fishing around the jetties with mullet fished around the rocks. Nearshore reefs (like the Jim Caudle Reef) have also had some nice flatfish.

Black drum fishing is getting better, and fresh cut shrimp is the ticket. The Tillman Docks are holding fish, and a Carolina rig fished on the bottom in 15-20’ of water on moving tides continues to work best. There are also plenty of good black drum being caught around ledges and docks in the ICW. 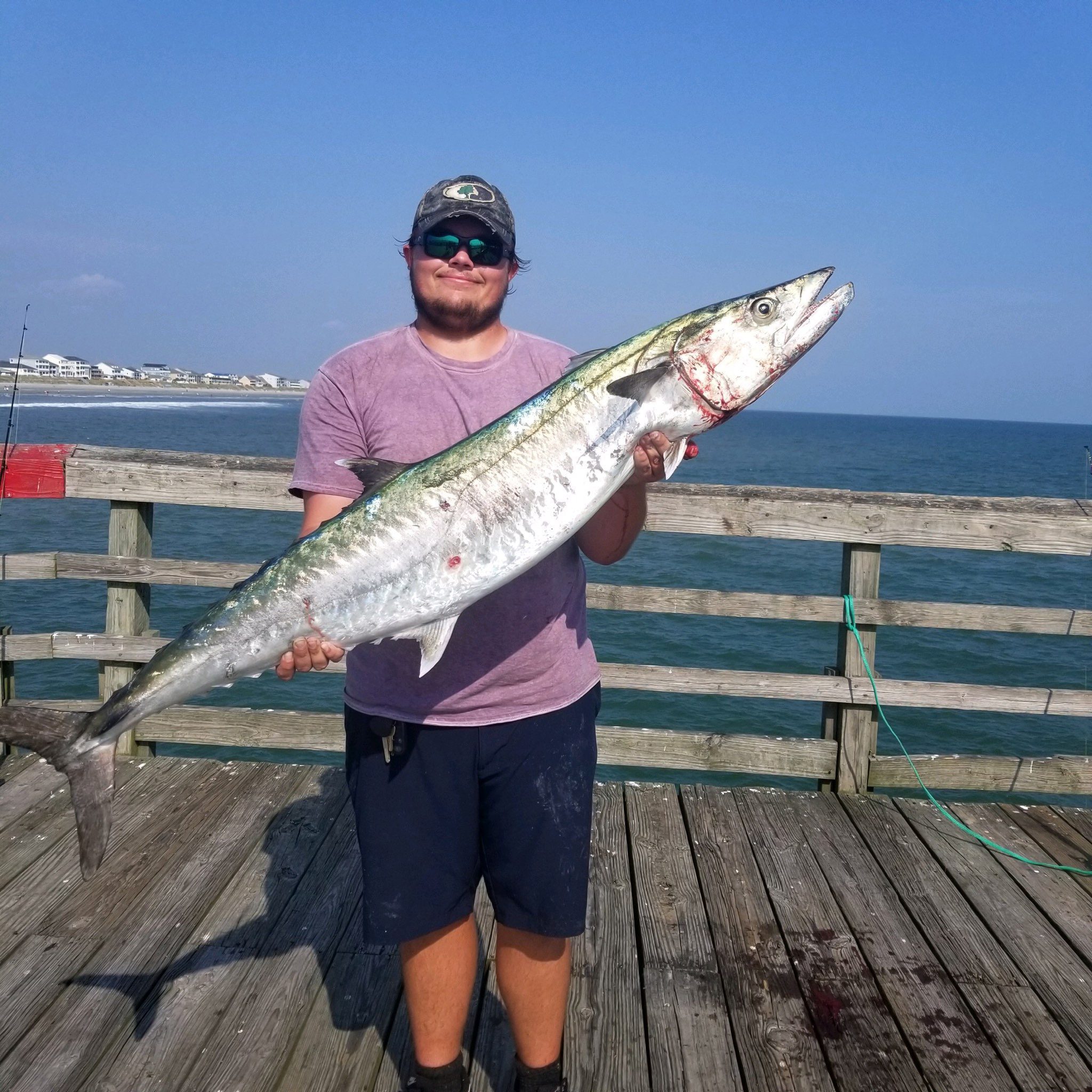 Brandon Jadin with a 36.4 lb. king mackerel caught off a live pogie on the Cherry Grove Pier.

Bob, of Strange Magic Fishing Charters, reports that cooling weather has turned the bite on. Small redfish are hitting fresh shrimp, live shrimp, and mullet minnows. Anglers targeting nervous bait in the waterway and along grass banks in area creeks have found the most fish.

Black drum are still around, but you have to put some effort in to find them with all of the fishing pressure. Fresh shrimp have been the go-to bait around docks, as well as some holes in the intracoastal waterway.

Speckled trout continue to be in their regular places, but they’ve been picky. Gulp soft plastics pinned to jig heads, as well as MirrOlures, work best (except for live shrimp, which most always works best, if you can get it). 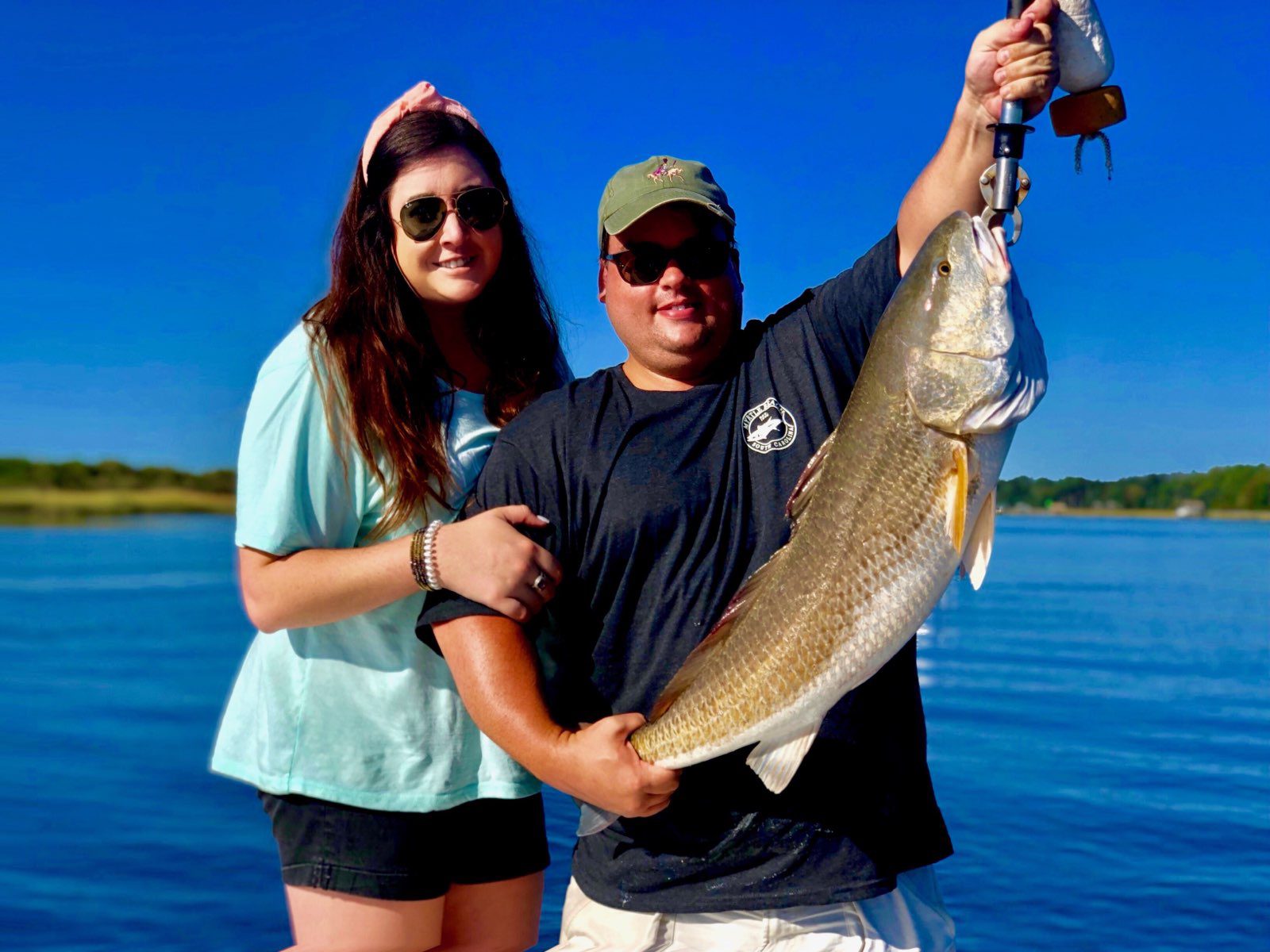 Spencer Simpson and his fiance Victoria showing off a 33″ redfish caught on finger mullet in the ICW close to the Sunset Beach Bridge. They were fishing with Capt. Mark Allison from Captain Smiley’s Fishing Charters out of Little River.

Larry, of Voyager Fishing Charters, reports that those making their way out to the Gulf Stream have been rewarded with great bottom fishing. Beeliners, grunts, triggerfish, rudderfish, amberjacks, African pompano, and kings have all been landed. A variety of cut and live baits have worked best.

In the 30 mile range, anglers have found limits of kings. Trolling dead cigar minnows and Drone spoons have gotten the job done.

Dropping to the bottom in the 90′ range has produced a solid grouper bite.

Just off the beach, spanish and bluefish have been schooled up and feeding well. Trolling Clarkspoons has been the key to landing high numbers of fish. When dropping to the bottom nearshore, anglers have landed sea bass, porgies, sea trout, and sharks.

Cameron, of Little River Fishing Fleet, reports that the bull redfish bite has improved some. Anglers fishing near the end of the jetty and around pogie pods have found the most fish, and large live and cut baits have both worked well.

Just off the beach and out to the 10 mile range, the king bite has kept anglers busy. Trolling with live baits and dead cigar minnows has produced good numbers of fish. Anglers have done best when targeting areas with live bottom and wrecks.

Michael, of Cherry Grove Pier, reports that spanish mackerel, bluefish, pompano, whiting, and a few spots have been caught off the pier.

There have also been some over-slot red drum landed.