Jeff, of Ocean Isle Fishing Center, reports that the inshore bite has remained steady. Speckled trout, flounder, and red drum have been holding in the waterway and marshes, but anglers targeting areas closer to the inlets have landed the most fish. Live finger mullet fished on Carolina rigs has been producing best. 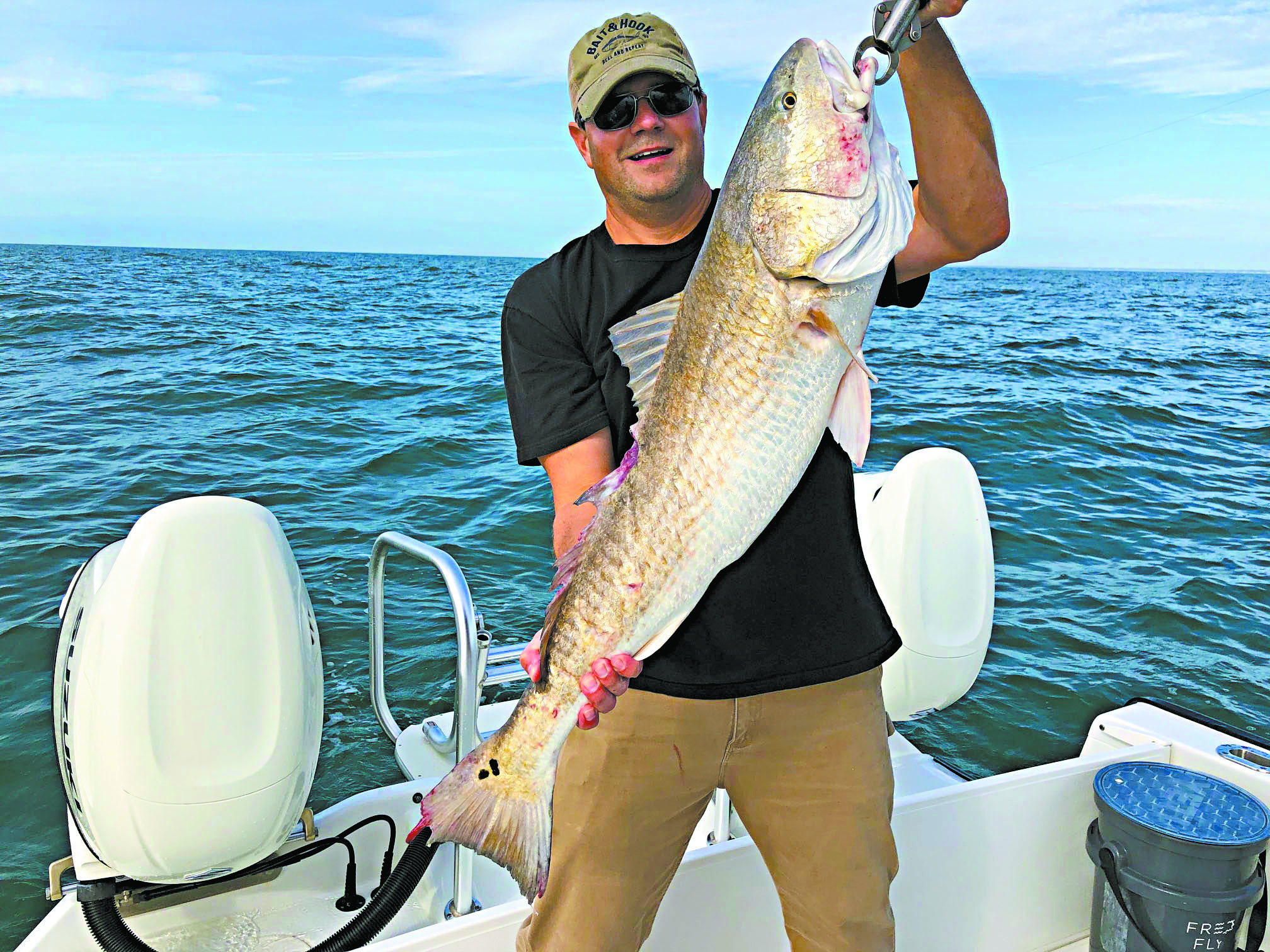 Mark Wood, of Raleigh, NC, with a bull red caught on live mullet at a nearshore reef off of Holden Beach.

Spanish, false albacore, and bluefish have been schooled up well just off the beach. Casting metal jigs to busting fish has produced the better numbers of fish.

In the 15-25 mile range, there has been a solid king bite. Targeting areas like the Jungle and the Shark Hole has produced the most success, and both live baits and dead cigar minnows have worked. There has also been a good grouper bite in this range.

Offshore, the wahoo numbers have picked up. Trolling dark-skirted select ballyhoo has been the key to landing good numbers of fish.

There has also been good gag grouper action in 80-90′ of water. 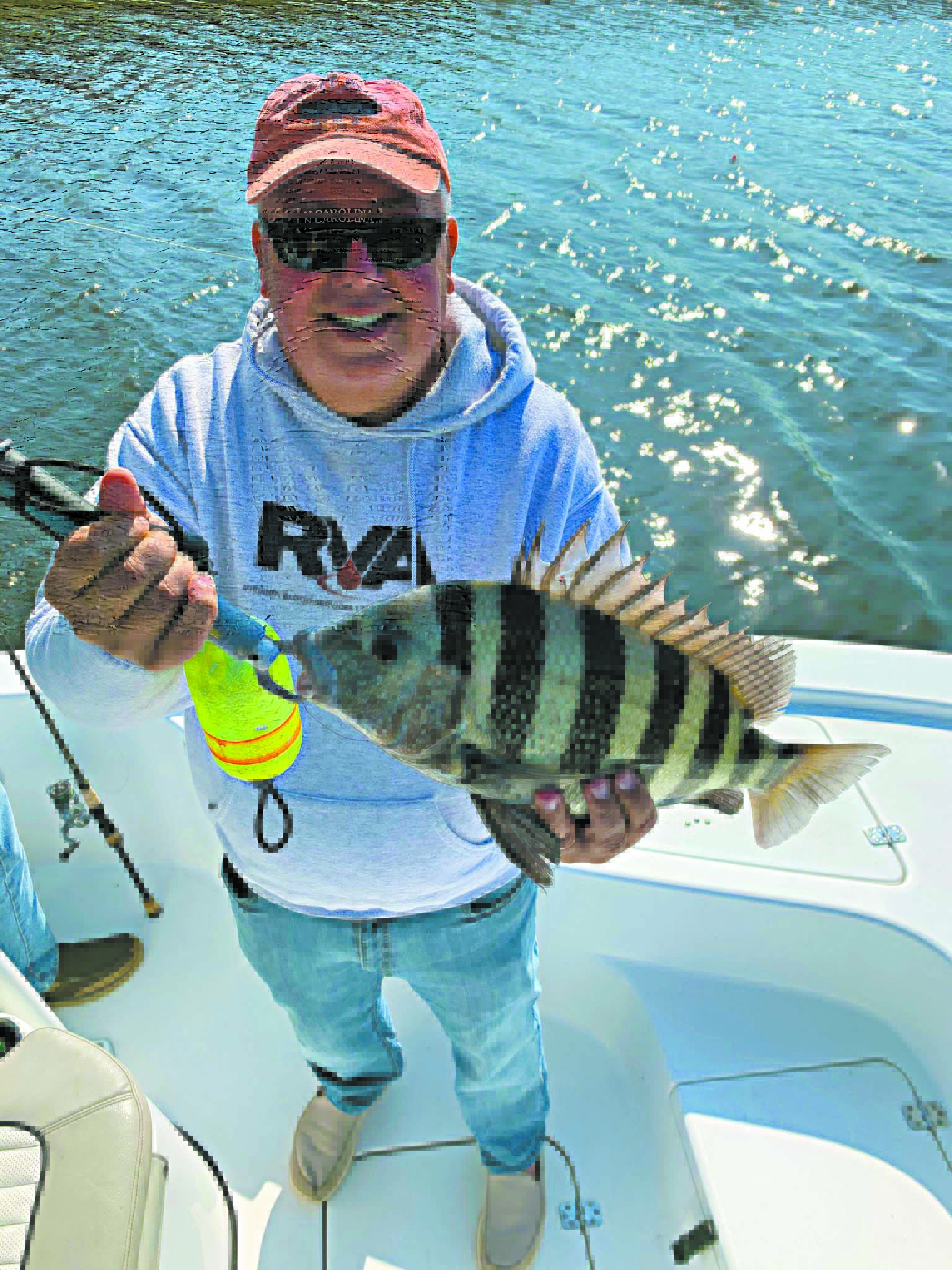 John Bennett, from Sunset Beach, NC, with a sheepshead that fell for cut crab while fishing with Capt. Tim Disano of Tideline Charters.

Kevin, of Rigged and Ready Charters, reports that speckled trout action has heated up and anglers are finding limits of fish with ease. Topwaters and Fathom Inshore soft plastics have been the top producing baits. Most fish have been in the 15-18” range, with a few bigger fish in the mix.

Tripp, of Capt’n Hook Outdoors, reports that speckled trout are on fire, with most fish in the 13-17” range. Live shrimp are always the best bait of choice, but when they’re not available, Saltwater Assassin soft plastics have been doing the trick as well.

Red and black drum have been mixed in with the trout in the skinny creeks and near docks or oyster rocks, and while the flounder bite is slow, it’s not impossible to find a keeper fish every once in a while.

Nearshore, king mackerel are chewing dead cigar minnows in 65-80’ of water. Most of the kings have been between 10-15 lbs.

The standard catch of bottomfish can be found in 100’ of water—such as grouper, beeliners, sea bass, grunts, and triggerfish—with squid and live pinfish getting the most results.

Tim, of Tideline Charters, reports that speckled trout fishing has been as good as it gets. The past few weeks have seen plenty of small fish, but more keepers are showing up every day. The traditional method of floating live shrimp under a slip cork rig has worked, but artificial baits have been just as successful, with a Swimmin’ Trout Trick on a 1/8 oz. jig head being the go-to.

The lighter jig helps the bait stay in the strike zone longer, with trout feeding more in the middle of the water column. Darker-colored Trout Tricks and Vudu shrimp fished the same way (or under a popping cork) have been putting fish in the boat.

Most of the specks are coming from deeper water along grassy banks and in creek mouths with good current. Moving water is the key to drawing a strike.

There’s been good black drum action lately when fishing with live or dead shrimp on the bottom. Oyster bars and cuts in the creek banks have been the best places to look, and you’re likely to pick up a red drum at the same time, though the reds will hit mud minnows as well.

Cecil, of Rod and Reel Shop, reports that surf fishing has been steady and anglers have landed whiting, black drum, and red drum. Most of the red drum have been in the slot. A mix of cut shrimp, bloodworms, and cut mullet has worked best.

The inshore speckled trout bite has picked up. Fish in the 16-18” range are holding in area rivers, and live shrimp fished under a float rig has been the ticket for the trout.

A few red drum are holding in the rivers, too. Live finger mullet and live shrimp have both worked well on the reds.

Just off the beach, the king bite continues to produce plenty of action. Slow trolling live baits around nearshore structure has been the key to boating good numbers of fish.

Bre, of Ocean Isle Beach Fishing Pier, reports that anglers are finding action with spot on the incoming tide. Bloodworms and cut shrimp have been the most dependable way to land plenty of fish for the cooler.

A few flounder and red drum have also been hooked from the pier. A mix of cut mullet and cut shrimp has worked best.