Jeff, of Ocean Isle Fishing Center, reports that shrimp, mud minnows, and pogies are easy to find and are producing red drum, black drum, flounder, and sometimes a trout.

While the flounder and reds are hitting live baits, the trout have taken a liking to Vudu and Gulp soft plastics in white with a chartreuse tail. Make sure to avoid the last hour of falling tide and the first hour of the rising tide in order to produce the best results. 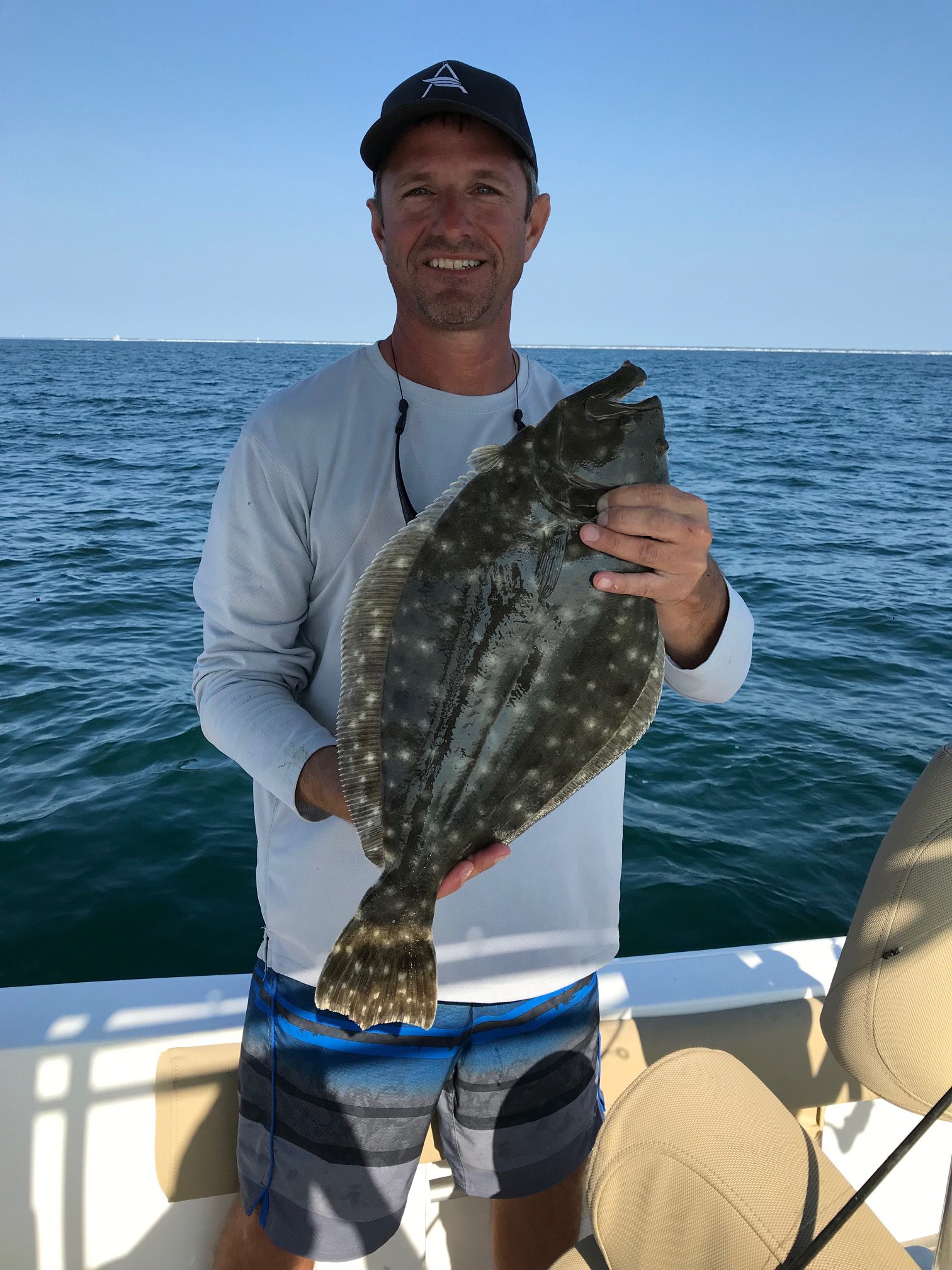 Jon Wood, from Emerald Isle, with a 23″ flounder (released) that hit a mullet at a nearshore reef off of Holden Beach.

Brant, of Ocean Isle Fishing Center, reports that just off the beach there are spanish in the 2-4 lb. range feeding. Trolling Clarkspoons has done the trick, and anglers have boated high numbers of fish.

The king bite remains hot nearshore, and most fish have preferred live bait. The kings have ranged anywhere from 15-40 lbs.

In the 20 mile range, the gag grouper bite has been solid. Anglers dropping live baits have found the most fish. A few kings are also holding in that range. Trolling dead cigar minnows and slow trolling live baits have both gotten the job done.

Offshore, the wahoo bite remains steady. Trolling medium and large rigged ballyhoo has been the ticket to landing quality fish.

A few scamp grouper have also been landed in the 40 mile range.

Kevin, of Rigged and Ready Charters, reports that the spanish bite remains strong near the beach. Anglers pulling Clarkspoons on #1 planers have boxed the most fish.

Those looking for bull drum have found a few fish around nearshore structure. Dropping fresh cut menhaden on a drum rig has worked best.

The nearshore king bite has heated up around nearshore structure off of Shallotte Inlet. Slow trolling live baits has been the ticket to hooking good numbers of fish.

Dropping live baits around the artificial reefs has produced some quality bottomfish.

In the 20-40 mile range, kings have been feeding well over live bottom. Trolling dead cigar minnows has been a successful tactic for the kings.

Out to the 40-50 mile range, there has been a solid grouper bite.

Tripp, of Capt’n Hook Outdoors, reports that the bull red drum bite is going off in the inlets and on most nearshore structure. Most of these fish are being caught on live and cut pogies on Carolina rigs with 6/0-8/0 circle hooks. Smaller reds are biting in the creeks on Carolina-rigged peanut pogies or finger mullet.

The black drum have been biting in deeper holes in the ICW and around the inlets. They are being caught on Carolina-rigged fresh shrimp.

Trout are here but not as thick as they will be in the coming weeks. The few fish that are being caught are 18-20” and biting Saltwater Assassins on jig heads around the jetty rocks and near shell banks.

Offshore, the gag grouper bite has fired off in the 60-80’ range. Most of the gags are being caught on pinfish or pogies.

The king mackerel have moved in on the beach and have been biting the best on the high pressure (calmer) ocean days. The kings are being caught predominantly on live pogies.

Tim, of Tideline Charters, reports that the bull redfish bite is in full swing. Anglers have been targeting area inlets and, when its calm enough, running the beachfront looking for big bait pods. Live pogies have been the best bait fished on the bottom, either under the bait pods or in the inlets. Most of the reds have been 40-50”.

Smaller redfish are biting well in the creeks in areas with good current and structure on the first hour of either side of the changing tide. Live finger mullet fished on the bottom, as well as live shrimp, have produced plenty of slot fish.

Black drum are chewing on live shrimp in the same areas as the reds.

The trout bite should get better as the weather starts to cool off. Early morning on higher portions of the tide and throwing light-colored topwater plugs and Vudu shrimp under popping corks has produced the most keeper fish. The majority of the trout have been 17-20”.

Kyle, of Speckulator Charters, reports that the large bull reds are making their way through the area before heading back offshore for the winter. Live or cut menhaden (or mullet) dropped to the bottom on an oversized Carolina rig is the way to target them.

There are some really nice spanish mackerel to be caught along the beaches, especially slow trolling a live mullet.

While much of the inshore focus in on the big reds, there are plenty of smaller reds to be had in the backwaters. These fish are varying in size from 15-30”, depending upon the area and the school of fish that you land in. Live or cut finger mullet fished on a Carolina rig or jig head around oyster bars or flooded grass is a great way to catch them.

Expect the speckled trout fishing to pick up once the air and water finally begin to cool down a bit.

Stewart, of Rod and Reel Shop, reports that surf fishing has started to heat up. Anglers fishing the bottom with bloodworms, fresh shrimp, and sand fleas have found pompano, bluefish, and a few flounder.

The spot run has also just kicked off. Anglers have landed just a few fish, but they should see numbers increasing daily.

Some over-slot red drum have been landed in the suds. Fresh cut mullet has been the best way to get the reds to bite.

Inshore, red drum and speckled trout have been feeding well around the marshes. Anglers tossing live shrimp and minnows under float rigs have found the most fish, and targeting marsh points and oyster structure has produced best.

David, of Ocean Isle Beach Fishing Pier, reports that a few spot have started to show up near the pier. Whiting, flounder, and sheepshead have also been feeding well for those fishing the bottom.

A couple of slot-sized red drum have been landed, too, and fresh cut mullet have worked best.