Annette, of Dutchman Creek Bait and Tackle, reports that inshore anglers have been finding primarily flounder and red drum, with some black drum coming in as well. Speckled trout have been active, but the keepers are few and far between. If you find the trout, expect the majority of them to be small.

Flounder, redfish, and black drum have been biting both in the surf and off the piers.

Nearshore flounder are chewing at the local reefs and live bottoms. 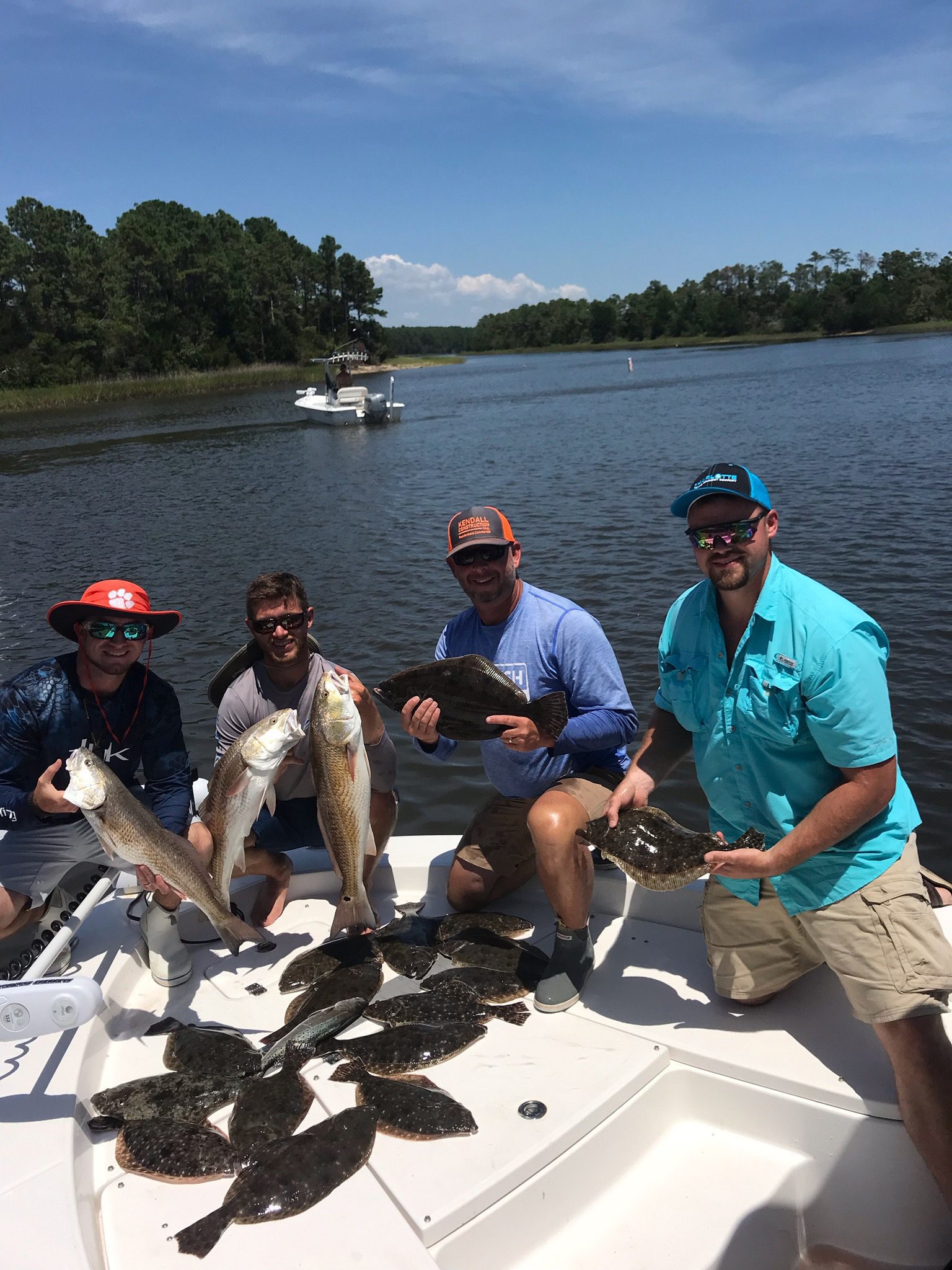 Tim, of Wildlife Bait and Tackle, reports that flounder are biting all over the place, with most of the fish coming from the Southport waterfront and the usual inshore spots.

Puppy drum have been in the creeks and marshes, especially in the mouths of creeks at low tide. Live bait is hard to beat, but Gulp soft plastics in new penny have been working well, too.

Topwater fishing has been productive from 6:00-8:00 in the morning and from 6:30 pm until dark. Under overcast skies, topwaters can be thrown all day. Zara Spooks, Spook Jrs, and Top Dogs are all great choices.

Topwater fishing has also been productive for trout, which are feeding in the river and on the oceanfront. Black drum are biting in the Cape Fear River, too.

Off the beach, there’s a lot of bait, and the spanish can be found working the bait pods.

Yaupon Reef and other nearshore structures are holding some flounder, where bucktails tipped with Gulps, cut croaker, or strip baits are helping anglers limit out on flatfish as big as 5 lbs.

Robert, of Reelin’ Pelican Charters, reports that inshore the redfish are biting in the creeks. They are averaging between 20-22”, with some in the 24-27” range. Most are falling for live menhaden or finger mullet on a Carolina rig.

Flounder (between 16-20”) are feeding both in the creeks and out at the nearshore reefs (where they can be found alongside gray trout). Live bait on a Carolina rig will produce, and it’s likely that an occasional red drum will be in the mix. For the nearshore flounder, bucktails tipped with Gulp soft plastics is another good option to bring fish to the boat.

Mark, of Angry Pelican Charters, reports that there have been spanish holding around the nearshore reefs, and light-lining live bait should produce some fish in the 4-6 lb. range. The spanish are also feeding from 7-10′ of water near Frying Pan Shoals out to 30-40′ of water outside the inlet. Targeting bait pods has produced larger fish.

King mackerel are feeding a little further off the beach in 55-70’ of water. Live bait or cigar minnows behind Big Nic rigs or Blue Water Candy Shovels have been producing good numbers of fish.

On the nearshore reefs, flounder and trout have been feeding on the bottom. Dropping a live finger mullet or shrimp has been the key to hooking up. 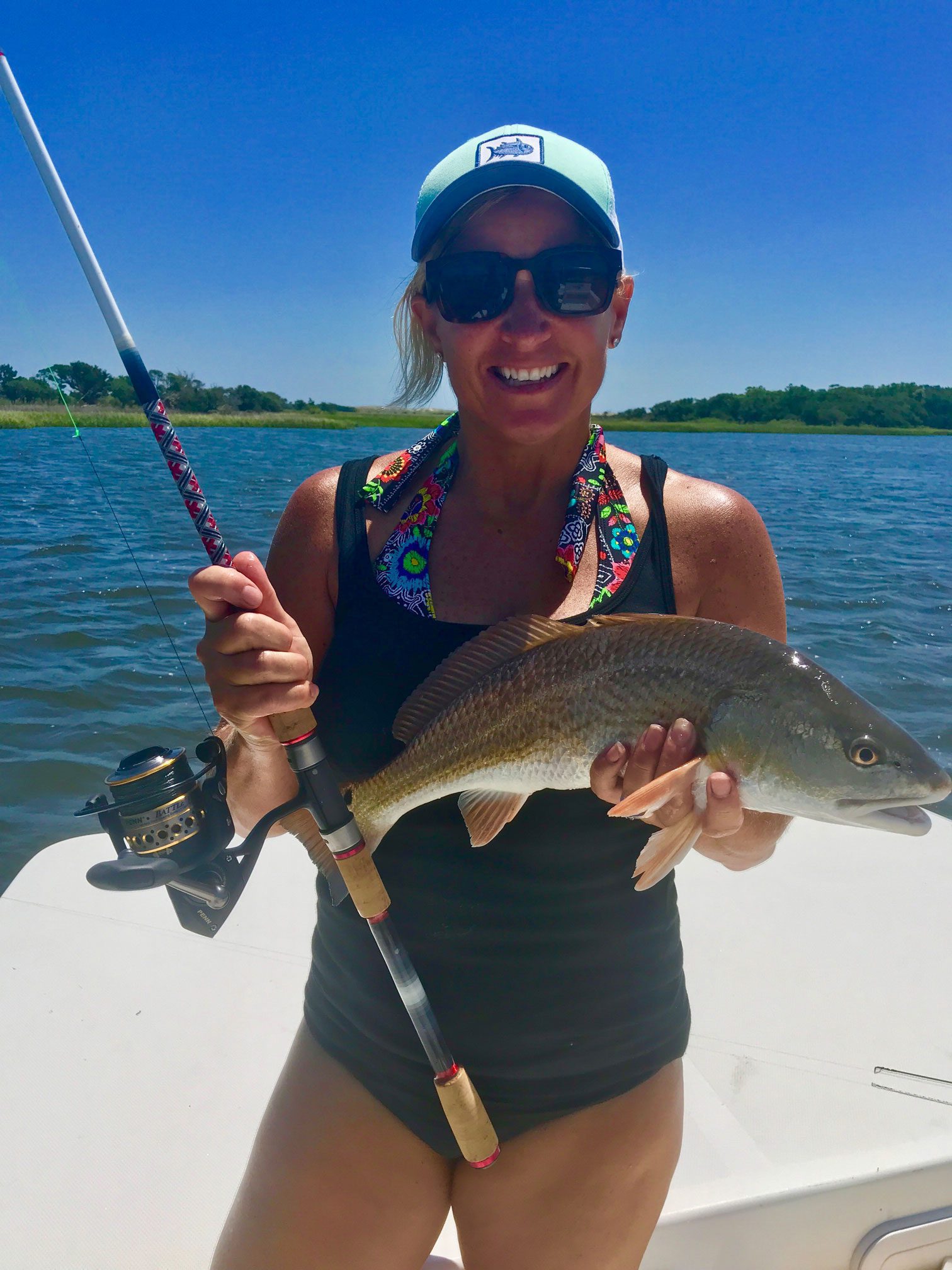 Lily Donat with a red drum that fell for a finger mullet on a Carolina rig on a “Mud Puppy Sticks” custom rod. She was fishing behind Bald Head Island.

Ryan, of Fugitive Charters, reports that spanish mackerel have been hit or miss after all the winds. Big bluefish have taken their place, with some weighing 7-8 lbs. The blues are falling for Clarkspoons as well as live bait trolled slowly.

King mackerel have pushed off the beach and to the west, but if you can find them, there are plenty and they are feeding.

Bottom fishing has been great for all of the usual species, as long as you can get out there with the weather.

Flounder are biting at nearshore reefs, and they are falling for live mullet or peanut pogies.

Wally, of Oak Island Charters, reports that the redfish bite has been decent. Most fish are in the creeks, and they are falling for live pogies on Carolina rigs. The reds have primarily been in the 19-23” range.

Those looking for flounder have had success in some of the same areas as the reds, with a mix of under-sized and keeper fish landed.

Offshore in the 20-40 mile range, anglers are connecting with a few mahi and plenty of kings while light-lining live pogies.

Bottom fishing in that same range has been filling the coolers with grouper.

Lynn, of Ocean Crest Pier, reports that flounder, pompano, black drum, sheepshead, croakers, and whiting are all being caught.

Morgan, of Oak Island Pier, reports that flounder, whiting, croakers, pompano, and other smaller species have been caught on live bait.