Angie, of Dutchman Creek Bait and Tackle, reports that backwater fishing is all about slot red drum and some nice flounder, with a few small trout coming in as well. Live bait has been the preferred method of targeting all three of the popular inshore summer species. A few sheepshead have also been caught here and there, with fiddler crabs and sand fleas proving to be the best bait.

On the surf side, anglers using shrimp are finding that plenty of pompano and a decent number of trout, whiting, and black drum are coming to shore. The occasional red drum and flounder can also be hooked in the suds, and a spot run here or there is easy to take advantage of when fishing bloodworms.

Trout and black drum can be caught in the early mornings off of the local piers.

Flounder are chewing nearshore, with the best fish found around Yaupon Reef. Anglers using live bait and Gulp-tipped bucktails are having no problem putting flatties in the boat.

Spanish are biting near Jaybird Shoals, and kings can be found around Lighthouse Rock. Cigar minnows are still the all-around best choice for drawing mackerel strikes.

The mahi action has slowed, but occasionally they can be found biting in the same areas as the kings, with pink/white Sea Witches seeming to do the most damage.

A few tarpon have been caught along the beach. 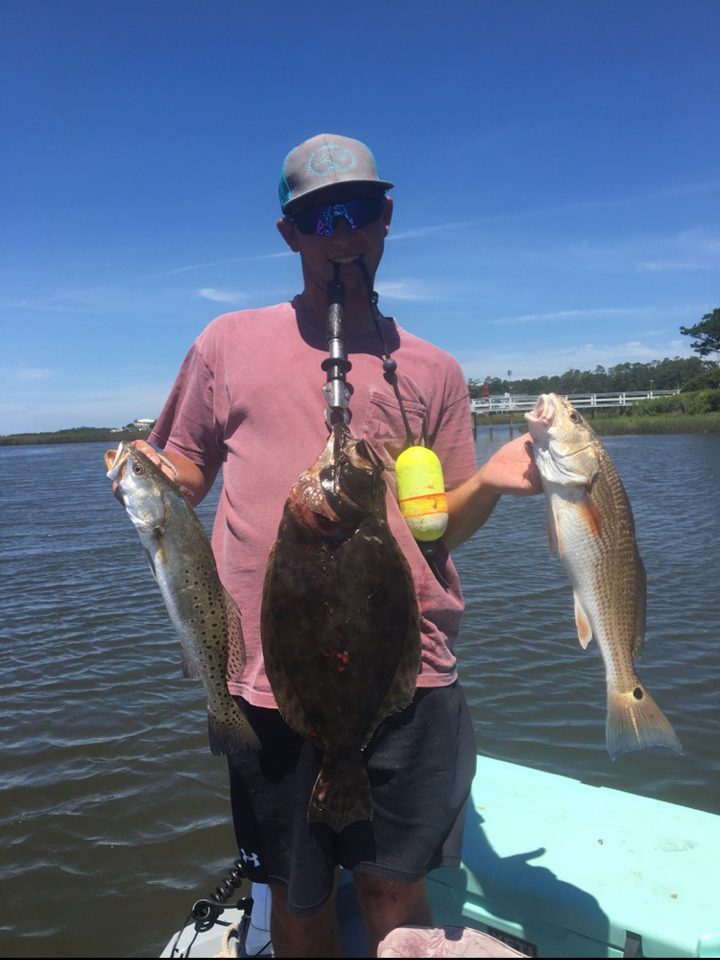 Tim, of Wildlife Bait and Tackle, reports that there have been good numbers of flounder landed both inshore and nearshore. The top two techniques are live bait on a Carolina rig or bucktails and Gulp combos.

Speckled trout have been falling for topwater plugs early in the morning and late in the evening. The specks have been interested in both live or artificial bait.

Red drum are abundant along grass banks (and sometimes in the grass) in the inshore waters. Most of the inshore reds are under-slot to mid-slot, but some upper-slot redfish can be found at the nearshore reefs.

Sheepshead are around dock pilings and other hard structures. Fiddler crabs on a Carolina rig will produce better than anything.

Nearshore king mackerel are hanging out around Lighthouse Rock, and the majority of the fish are in the 20 lb. range. Further out to the Horseshoe, the larger kings are biting, along with big black sea bass.

Grouper are in 90-150’ of water, including scamps, speckled hinds, gags, and reds.

Mark, of Angry Pelican Charters, reports that the nearshore action has been steady, with better numbers of the summer spanish mackerel run showing up along the beach. Some nice king mackerel and cobia are feeding from the beach out to the Tower, and the best areas to target are over live bottoms and around structure.

Live bait continues to be a challenge along the beach, but there are pogies in the creeks. The inshore pogies include some larger ones (a good size to use as king baits) mixed in with the peanuts. Big Nic Mack-a-Hoo’s and cigar minnows will also draw strikes from the hungry kings.

Offshore in the 15-40 mile range, mahi can be found over the same live bottoms as the kings. Bottom bouncing for grouper, snapper, sea bass, and triggers has been very productive in depths beyond 70’. 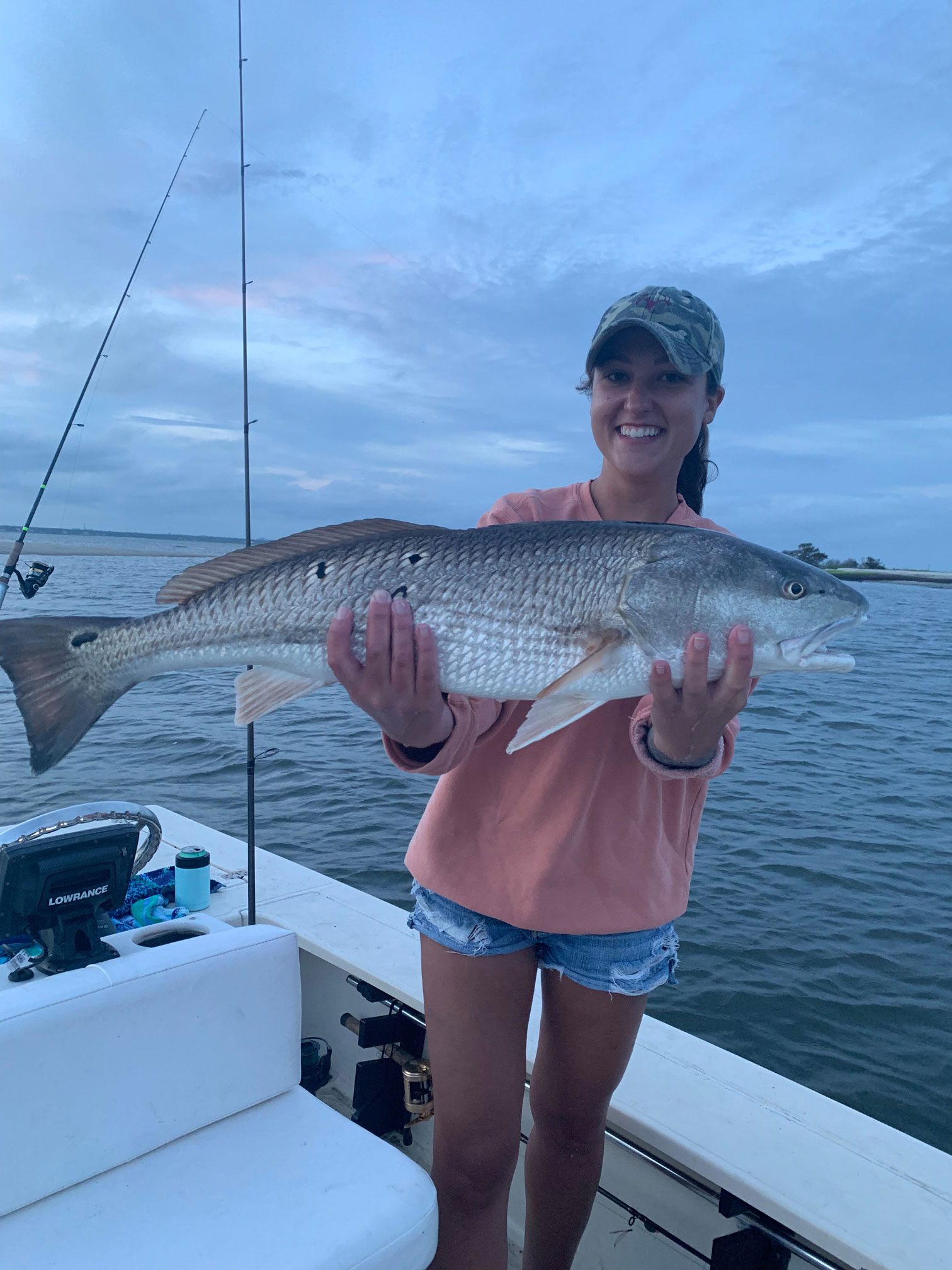 Kaitlyn Thompson, of Southport, with a 27″ red drum caught on live mullet while fishing near Oak Island.

Wally, of Oak Island Fishing Charters, reports that the flounder and red drum bite has been turning on in the river and on the nearshore ARs, with live mullet proving to be the best bait.

Spanish are just about everywhere, with the most productive fishing coming from Clarkspoon/planer combos in 35’ of water. Kings (anywhere from 8-20 lbs.) are a little deeper in 45-65’ of water, where frozen cigar minnows are getting the most bites. Larger spanish have been mixed in with the kings.

Bottom fishing, especially in depths of 120’, has been producing plenty of grouper, with live pinfish serving as an excellent choice for bait.

Lynn, of Ocean Crest Pier, reports that anglers have been tearing up fish. Plenty of trout, some nice spanish, several citation pompano, flounder, and whiting have all been coming in.