Annette, of Dutchman Creek Bait and Tackle, reports that surf anglers have had success landing bluefish and spanish. Casting Stingsilvers and Gotcha plugs has been the key to hooking both species.

A few false albacore are being caught from the pier, and metal jigs have worked best.

Kings have also started making their way to the beach. A few have been landed from the end of the pier, and boats slow trolling live baits in the nearshore waters have found kings in the 15-25 lb. range.

Just off the beach, the spanish bite has remained steady. Trolling Clarkspoons has been the best method for hooking higher numbers of fish. 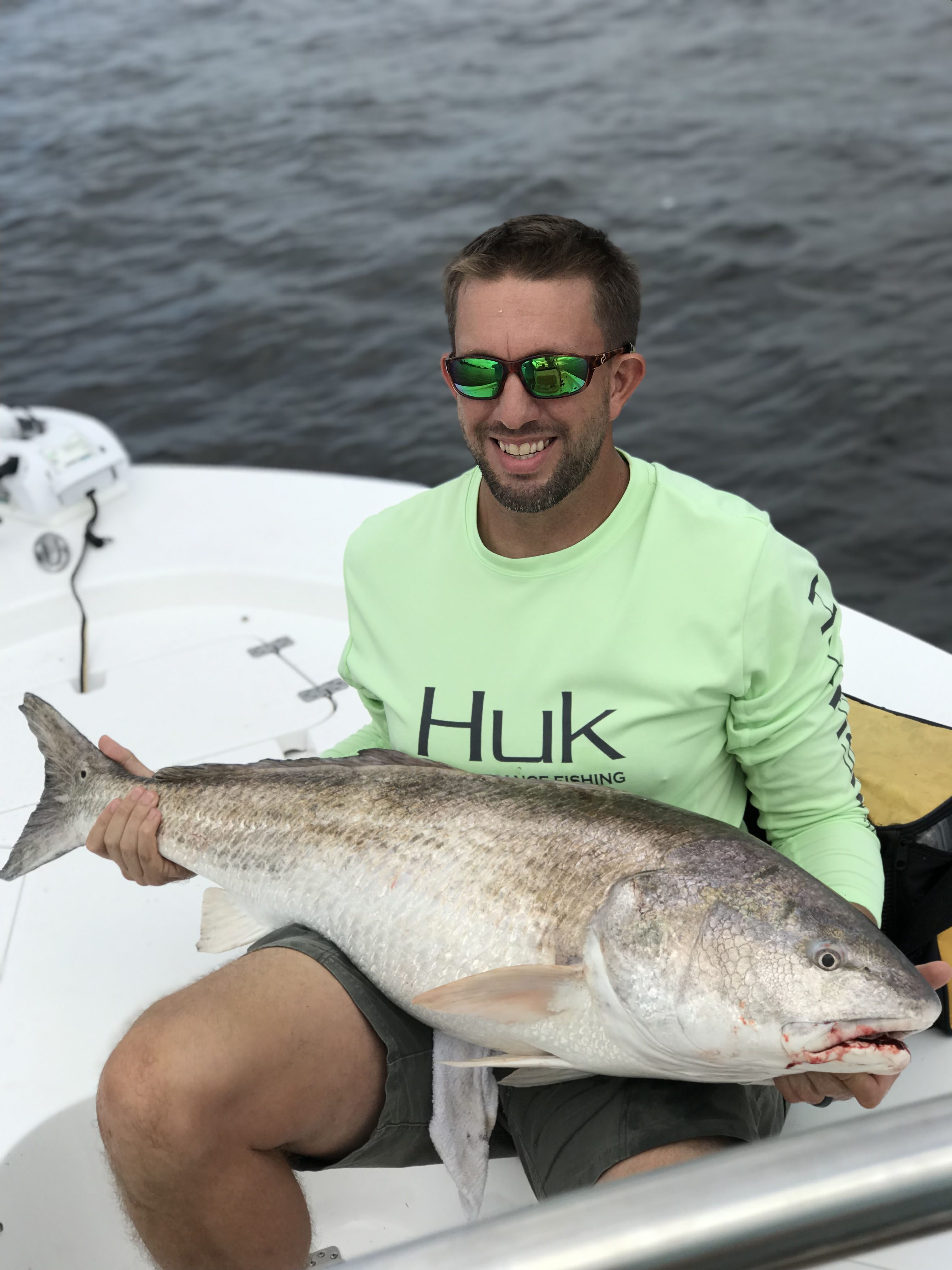 Rhett Hubble with a 43″ bull red caught on medium tackle using a mullet minnow in the Southport area.

Tim, of Wildlife Bait & Tackle, reports that the inshore red drum bite has picked up. Anglers have had the most success targeting creek mouths on the falling tide. Carolina-rigged finger mullet has been the bait of choice, and most fish have been in the slot.

Just off the beach, the king mackerel bite has fired up. Anglers trolling around Ocean Crest Pier and in front of Shallotte Inlet have started to see good numbers of fish in the 15-30 lb. range. Slow trolling live baits has been the best way to hook up with the kings.

Around nearshore structure, the bull redfish bite has begun. Anglers using large pieces of fresh cut mullet have been the most successful with the big reds.

Offshore, the wahoo bite has improved, as anglers are consistently finding good numbers of quality fish. 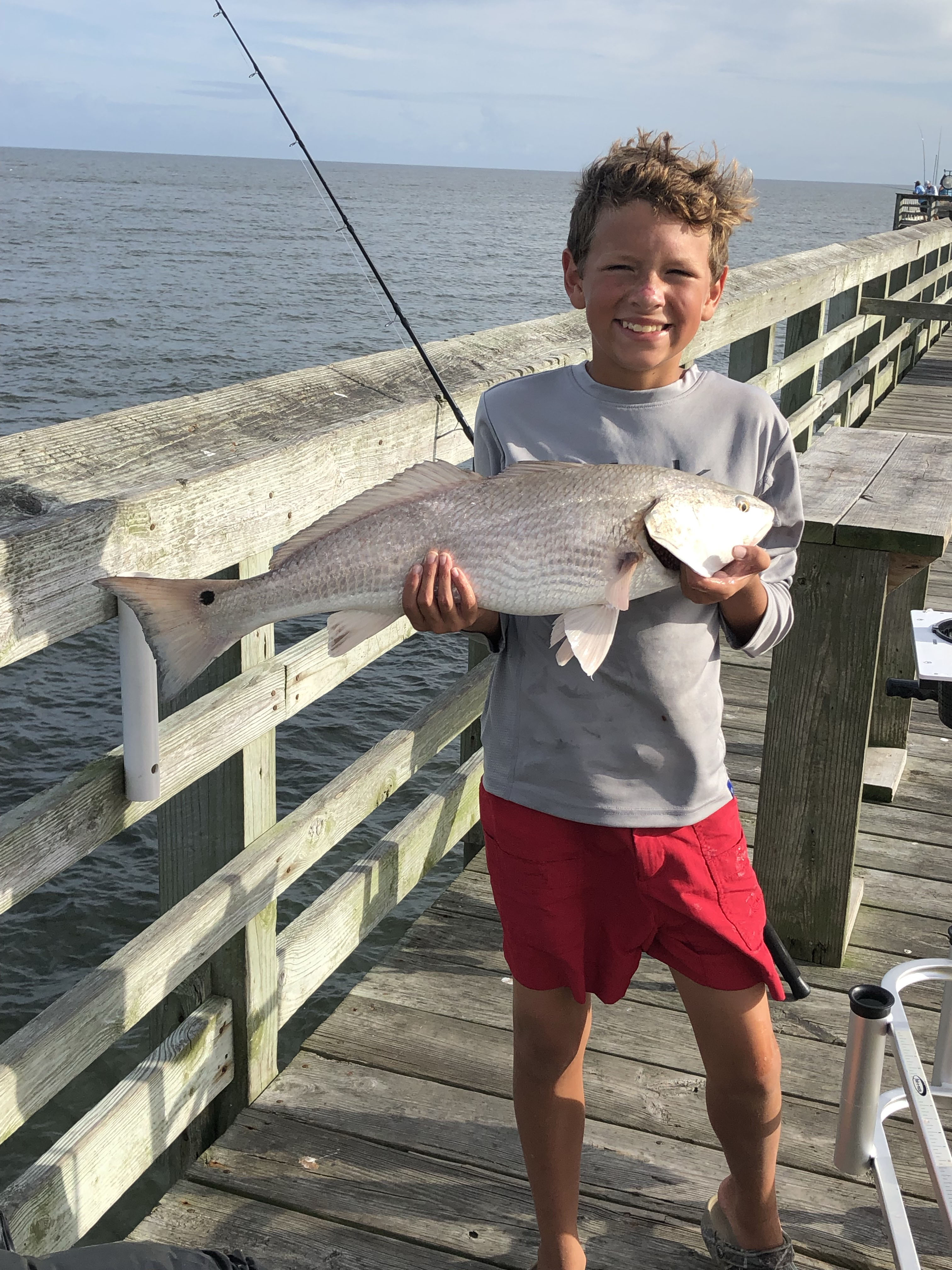 Robert, of Reelin’ Pelican, reports that the redfish bite continues to produce plenty of inshore action. Red drum have been holding around docks and on shallow flats in the area rivers, and live finger mullet and topwater plugs have done the best job at drawing strikes.

A few speckled trout have been mixed in the same areas. For the trout, anglers have had better success in the early morning hours.

The flounder bite has picked up inshore but slowed down a bit on the reefs. Tossing live finger mullet on Carolina rigs near docks and creek mouths has worked best in tempting the flatfish to chew.

Off the beach, the king bite has started to pick up near the beaches. Those slow trolling with live baits have landed some quality fish near structure.

The bull red drum have also made their way to nearshore structure. Dropping both large cut baits and live baits has hooked anglers into plenty of action.

Mark, of Angry Pelican Charters, reports that nearshore fishing has provided plenty of red drum action. These over-slot fish have been feeding around nearshore structure and near bait pods.

A mix of spanish, bluefish, and false albacore have also been feeding around the bait pods, and anglers trolling Clarkspoons and casting Stingsilvers have had the most success.

Around the inlets, there are red drum, flounder, and speckled trout all feeding well. Casting a live shrimp or finger mullet on a Carolina rig has been the best way to box a few keepers of any of these top three inshore species.

Offshore in the 30+ mile range, sailfish, blackfin tuna, mahi, and wahoo have all been feeding. A few kings have been mixed in as well.

Ryan, of Fugitive Charters, reports that bait has pushed onto the beach. The mullet and pogies are plentiful, setting things up for great fall fishing.

A few big reds can be caught nearshore, as well as big spanish mackerel, and the kings should start moving onto the beach any day now.

Bottom fishing has been good, but tough current has made things more difficult.

Wally, of Oak Island Fishing Charters, reports that those trolling with Clarkspoons just off the beach for spanish are finding high numbers of fish, and slow trolling the reefs with live mullet has produced spanish up to the 28” range.

A few king mackerel have started to move on to the beach, and most of the kings have preferred live menhaden.

Shark fishing behind the shrimp boats has been hot, where tossing cut or chunk baits has done the trick.

In the 30 mile range, the king bite has been consistent when trolling Drone spoons and dead cigar minnows. A few mahi, sailfish, and blackfins have also been landed in this range.

Steve, of Ocean Crest Pier, reports that kings are starting to feed from the end of the pier. Anglers have landed a few and expect the bite to improve over the next few weeks.

Those casting jigs have hooked solid numbers of bluefish and spanish. Most of the blues and spanish have bit better early in the morning.

Fishing the bottom with fresh shrimp has produced a few speckled trout, whiting, and red drum.

Jerry, of Oak Island Pier, reports that on the bottom, anglers are catching trout, flounder, black and red drum, croakers, and whiting. There has been an occasional spade fish coming in as well.

When the waters clear up more, bluefish and spanish mackerel will bite more often. There has been no king mackerel pulled over the rails yet, but they are expected to be here within the next few weeks.