Richard, of The Reel Outdoors, reports that both speckled trout and good-sized red drum have been biting inshore. MirrOlures are working for the specks, though most of the fish have been small.

In the surf, shrimp and artificial bloodworms have accounted for great catches of bluefish, puffers, sea mullet, black drum, and a few red drum.

False albacore are starting to show up in the nearshore waters.

Offshore, the wahoo bite has been strong, and plenty of blackfin tuna are being caught as well. 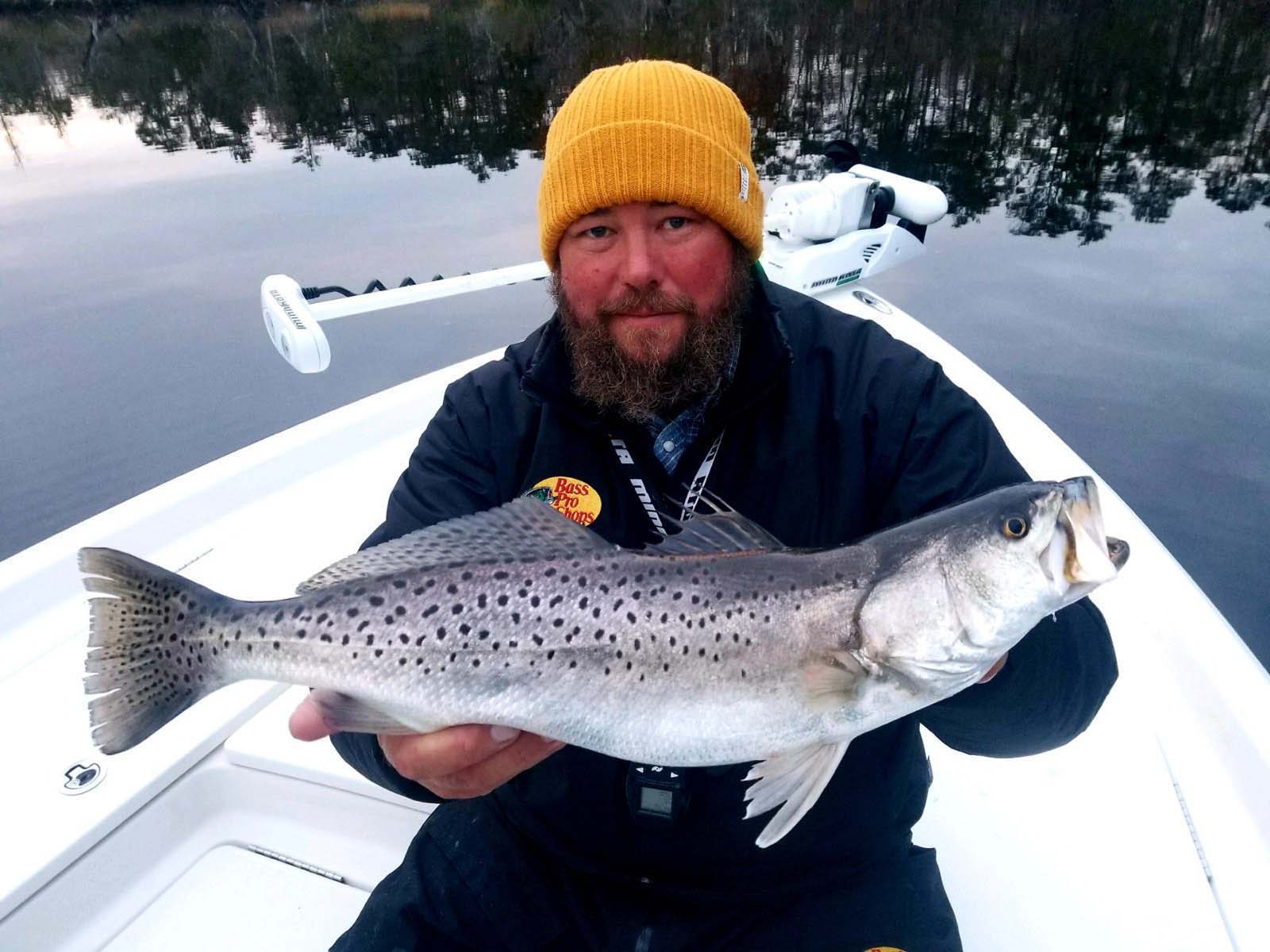 Capt. Ray Brittain, of Spring Tide Guide Service, shows off a speckled trout that fell for a Bass Assassins chicken on a chain soft plastic on a Blue Water Candy jig head. He was fishing near New River.

Dale, of Dudley’s Marina, reports that under- to mid-slot red drum continue to bite in the marshes, where light Carolina-rigged mullet or blue crab and 4” Gulps in white or chartreuse are drawing strikes. Speckled trout are still back in the creeks, where they’re falling for MR17s, Zoom Golden Brems, and dark-colored Z-Man soft plastics.

Bonito and false albacore are starting to show up closer to the beach, and more black sea bass are being caught on the bottom as well. Flounder are starting to chew bucktails in the 7-8 mile range.

Schoolie kings (around 10 lbs.) are beginning to make an appearance in the 30 mile range, and wahoo are still occasionally biting closer to the Gulf Stream.

Dallas, of Pogie’s Fishing Center, reports that fishing is starting to get better thanks to the warmer weather that the area has been experiencing. Redfish have been readily biting and are still relatively thick in certain areas. Anglers are doing a lot of patrolling to find movement, but it’s best to search for the reds on the lower tide stages, where the fish get penned up and you don’t have to spend as much time searching. Mud minnows have been the bait of choice.

Trout are still biting in the backwater creeks, and throwing shrimp should get you in on the action.

Flounder should be moving in soon.

Rob, of Sandbar Safari Charters, reports that speckled trout are biting in the creeks and the mouths of the bigger rivers. Slowly working small soft plastics has been effective, as have mud minnows under popping corks.

There have been plenty of redfish schools in the marshes and open shallow mudflats in the backwaters. Scented baits slow-hopped in front of the fish is the ticket for most of the reds, but the more finicky fish prefer soaked cut baits.

The nearshore bite has been heating up, with blues, keeper sea bass, gray trout, and false albacore starting to cover up the reefs and wrecks. Vertical jigging with Stingsilvers and bucktails will catch all of these fish when they’re hungry, and you can add a squid trailer if they’re being picky.

Johnathan, of On Point Charters, reports that temperatures haven’t increased enough for much to change over the last few weeks. Redfish are still schooled up on the flats behind the barrier islands, and though the schools can be massive (with up to 500 fish), they’ve been heavily pressured and may not be willing to bite. If they are willing to strike, using a soft plastic on a jig head will be your best bet.

Speckled trout have slowly been moving out from the river creeks, and they’re still likely to hit soft plastics on light jig heads.

False albacore, bluefish, and Atlantic bonito should be making an appearance on the beaches soon. 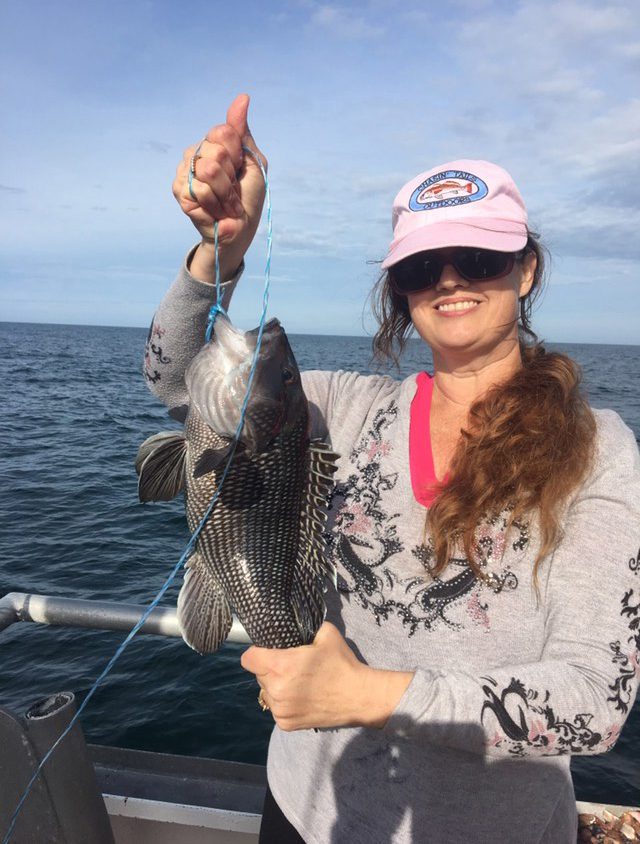 Amanda Turner, from Cape Carteret, NC, landed this sea bass that fell for a squid head around the 240 Rock off Beaufort Inlet. She was fishing on the Carolina Princess with Capt. Wayne Dodson.

Bobby, of Teezher Charters, reports that Atlantic bonito are starting to show up on the nearshore rocks and reefs, along with some false albacore and bluefish. A few smaller spanish have been caught just off the beach as well, and black sea bass have been hugging the bottom.

Kings have moved in to the 10-15 mile range, and a few (with at least one 50 lb. fish) are being caught out near the break in the warmer water as well, typically by anglers light-lining while bottom fishing for triggers, beeliners, and black sea bass in the 110-150’ depths.

Jigging for amberjacks has also been productive in the same range.

The wahoo bite has been great from the Big Rock to the Swansboro Hole, and both yellowfin and blackfin tuna are coming in as well. Dolphin are starting to show up, with gaffers already in the mix. There haven’t been many billfish yet, but it’s only a matter of time.

Overall, conditions are shaping up for a great spring/summer season. Water temperatures dipped back below 60 after the recent cold spell, but once the warm weather starts getting consistent, fishing should really pick up.

The next big bite should be the cobia, which will start to show up around Cape Lookout shortly after the menhaden arrive.

Josh, of Liquid Fire Sportfishing, reports that nearshore fishing has picked up some, with false albacore appearing more frequently. Small bluefish have started to show up just off the beach as well.

A few Atlantic bonito are making an appearance, but not in the big numbers that you can expect by the end of the month. Trolling with Yo-Zuri Crystal Minnows and casting with diamond jigs will put fish in the boat.

Bottom fishing remains productive in the 35+ mile range along ledges and hard bottom. Triggerfish and snapper are still abundant, and quite a few grouper are biting as well, though they are still catch-and-release until May 1. Sardines are the go-to bait.

Wahoo and blackfin tuna are being caught at the Big Rock, with some yellowfin mixed in, too. They’ve been caught with ballyhoo both on the surface and on planers.

A few dolphin have been around as well.

Teresa, of Bogue Inlet Pier, reports that pufferfish and sea mullet have been the two biggest catches over the past few weeks.