Hannah, of The Reel Outdoors, reports that inshore fishing continues to pick up with the increased arrival of bait into the area.

Red drum are being caught in marshy areas behind the barrier islands with cut baits and soft plastics.

A few speckled trout have been caught in creeks off the ICW in the morning before the fish push into deeper waters through the heat of the day.

Flounder are hitting live baits and soft plastics, though most fish are just short.

Dale, of Dudley’s Marina, reports that the red drum bite has been good inshore, with fish hitting 4” Gulp shrimp and Z-Man soft plastics on light jig heads. Topwater plugs (such as Rapala Skitterwalks and Heddon Spooks) are getting strikes in the early and late hours of the day.

Flounder are hanging around docks and creek mouths off the ICW. Carolina-rigged live mullet and Falling Tide spinnerbaits have been popular options with local anglers.

Sheepshead and black drum are staged up around inshore docks and bridge pilings, and they’re feeding on sea urchins, shrimp, and live fiddler crabs.

Nearshore anglers are reporting spanish mackerel and bluefish while trolling Clarkspoons behind a planer.

Smaller king mackerel are being caught at the nearshore ARs from three miles out.

The mahi have scattered out and are being caught as close in as 12 miles while trolling ballyhoo. 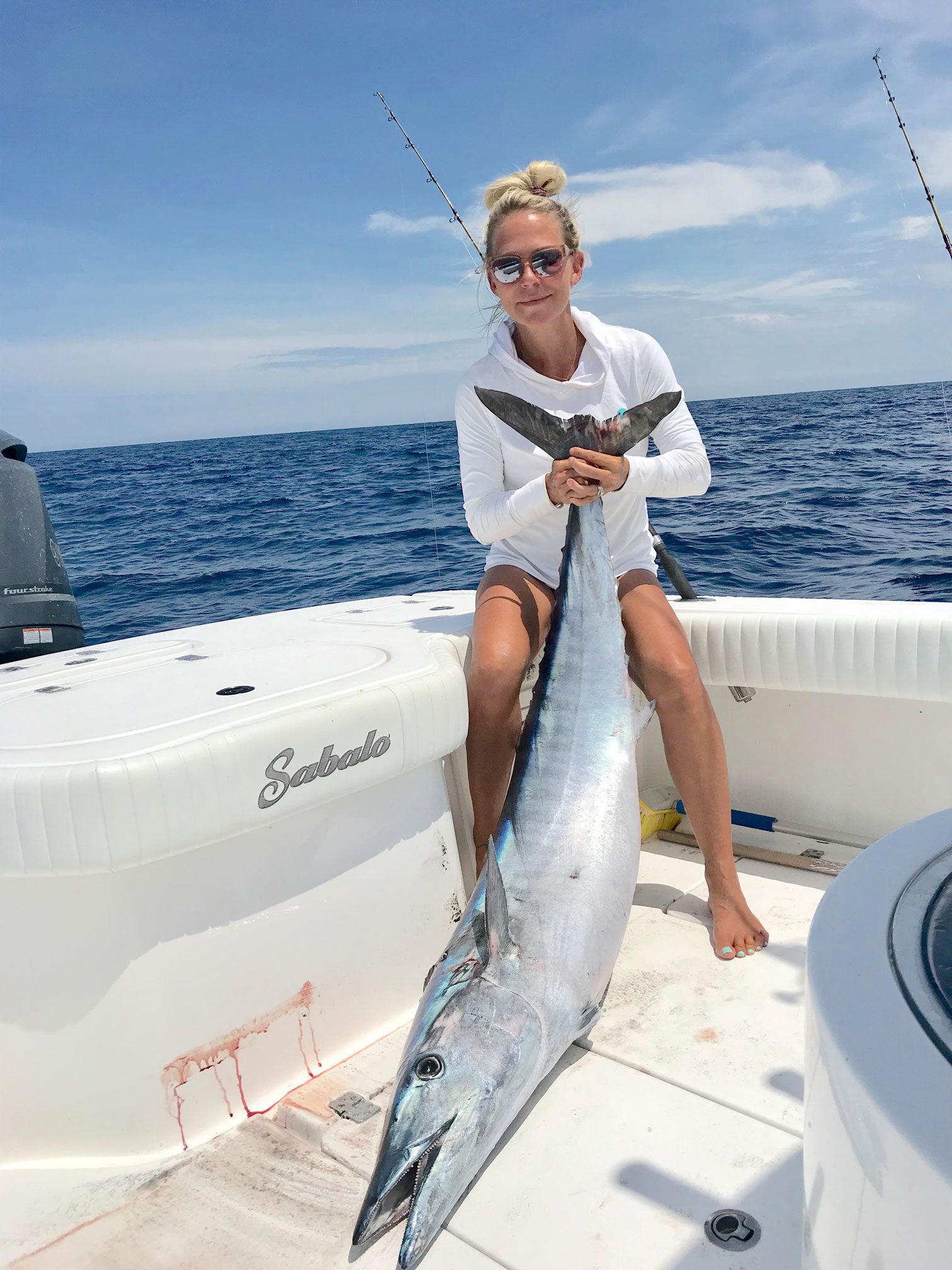 Lisa Heverly showing off a 70 lb. wahoo caught on pirate plug 7500 spin fisher. She was fishing with Capt. Roy Heverly with Emerald Isle Adventures out of Beaufort Inlet.

Laini, of Pogie’s Fishing Center, reports that flounder have been biting well in the marshes. Many fish have been just short, but the keeper ratio should get better as more fish push in from the ARs.

Redfish are also in the marshes, mostly staged up on flats and holes behind Bear Island. The drum are broken up into small schools of three or so fish, but there has been some size to the ones caught. Soft plastics, gold spoons, and Carolina-rigged live baits all work great when fishing these areas.

Sheepshead fishing has been good around bridges and docks. Carolina-rigged live fiddler crabs fished tight to barnacle-covered pilings has been successful for anglers targeting them.

A few bluefish are in channels just inside the inlet. Casting jigs at surface feeding fish is generating all the bites an angler wants.

Rob, of Sandbar Safari Charters, reports that fishing has been great this week, with calm weather windows allowing long days of fishing. Most action has been nearshore with flounder stacked up at the ARs. The flatfish are hitting bucktails with soft plastic trailers.

King mackerel are staged at these same wrecks and live bottom areas, and a few larger fish are being caught in with the schoolie-sized fish of the past few weeks. Trolling cigar minnows on dead bait rigs has been the most successful tactic in getting a few strikes.

The grouper bite has been solid for anglers fishing structure in 80’+ of water with cut bait.

Inshore anglers are finding a good variety of slot-sized red drum, speckled trout, and flounder in marshy areas behind the barrier islands.

Johnathan, of On Point Charters, reports that the inshore red drum bite has been good in the shallow bays behind the barrier islands. Anglers fishing Carolina-rigged live mullet have had the most success, with some finding a strong topwater bite in the morning.

Better numbers of flounder have been showing up in recent weeks, and anglers anticipate the trend to continue with more bait pushing through the inlet. Gulp soft plastics rigged on 1/4 oz. Fathom jig heads have been great in getting the flounder to bite.

Bluefish and smaller spanish mackerel have been feeding just outside the inlet on the tide lines. Trolling Clarkspoons and casting glass minnow style jigs have worked great in landing a few.

Nearshore flounder are staged at the ARs, being caught with 2 oz. bucktails worked close to structure.

King mackerel and large spanish mackerel (up to 6 lbs.) are on the same reefs as the flounder, and they’re hitting live shad slow trolled on king rigs.

Bobby, of Teezher Charters, reports that warming water temperatures have the mahi breaking up and pushing inshore in the 30 mile range.

Some large king mackerel are in areas with the mahi, and they’re hitting cigar minnows on dead bait rigs.

Nearshore anglers are catching spanish mackerel and some bluefish around wrecks in the 3-5 mile range.

Bottom fishing these ARs has been producing good numbers of keeper flounder.

Josh, of Liquid Fire Sportfishing, reports that king mackerel fishing has been good in the 7 mile range with dead bait rigs and cigar minnows.

A few mahi are being caught at nearshore ARs on the dead bait rigs, but the bite is scattered as fish just started their push in with the hot water temperatures.

Bottom fishing around wrecks and live bottoms has been producing amberjacks and triggerfish.

Teresa, of Bogue Inlet Pier, reports that spanish mackerel fishing has been very good for anglers casting Gotcha plugs and glass minnow jigs to cruising schools of fish. Most have been smaller 1-3 lb. fish, but a few large (up to 5 lbs.) spanish are beginning to show up now that the water temps are in the high 70s.

Bluefish are mixed in with the spanish, and they’re hitting Gotcha plugs and the occasional Carolina-rigged cut bait.

A couple of under-sized cobia have been caught by anglers further down the pier.

Nice-sized black drum (up to 4 lbs.) are being caught with shrimp fished on a bottom rig.

Spot and sea mullet are hitting the same shrimp baits, as well as Fishbites strips, fished on the bottom.

Closer to the breakers, anglers are catching pompano with sand fleas.

A few flounder are hitting soft plastics worked in holes close to the beach.

Sheepshead and spadefish are being caught with sand fleas fished right up against the pilings.