Chris, of East Coast Sports, reports that surf anglers are landing sea mullet and pompano while dropping sand fleas or shrimp into deeper holes just off the sand.

Spanish mackerel are being caught early by those casting Spanish Candy and similar glass minnow-style jigs.

Inshore anglers are reporting a steady red drum bite. Topwater fishing has been great in the mornings and evenings, with soft plastics and live baits being productive all day. A few speckled trout are mixed in, but the heat from this past week has slowed the trout bite down.

Nearshore anglers are catching spanish mackerel and a few large king mackerel (for those patient enough to slow troll just off the beach). King mackerel are thick in the 15 mile range, and they’re being hooked on Mac-A-Hoos and other dead bait rigs with ballyhoo.

A few scattered mahi are in the 24 mile range. 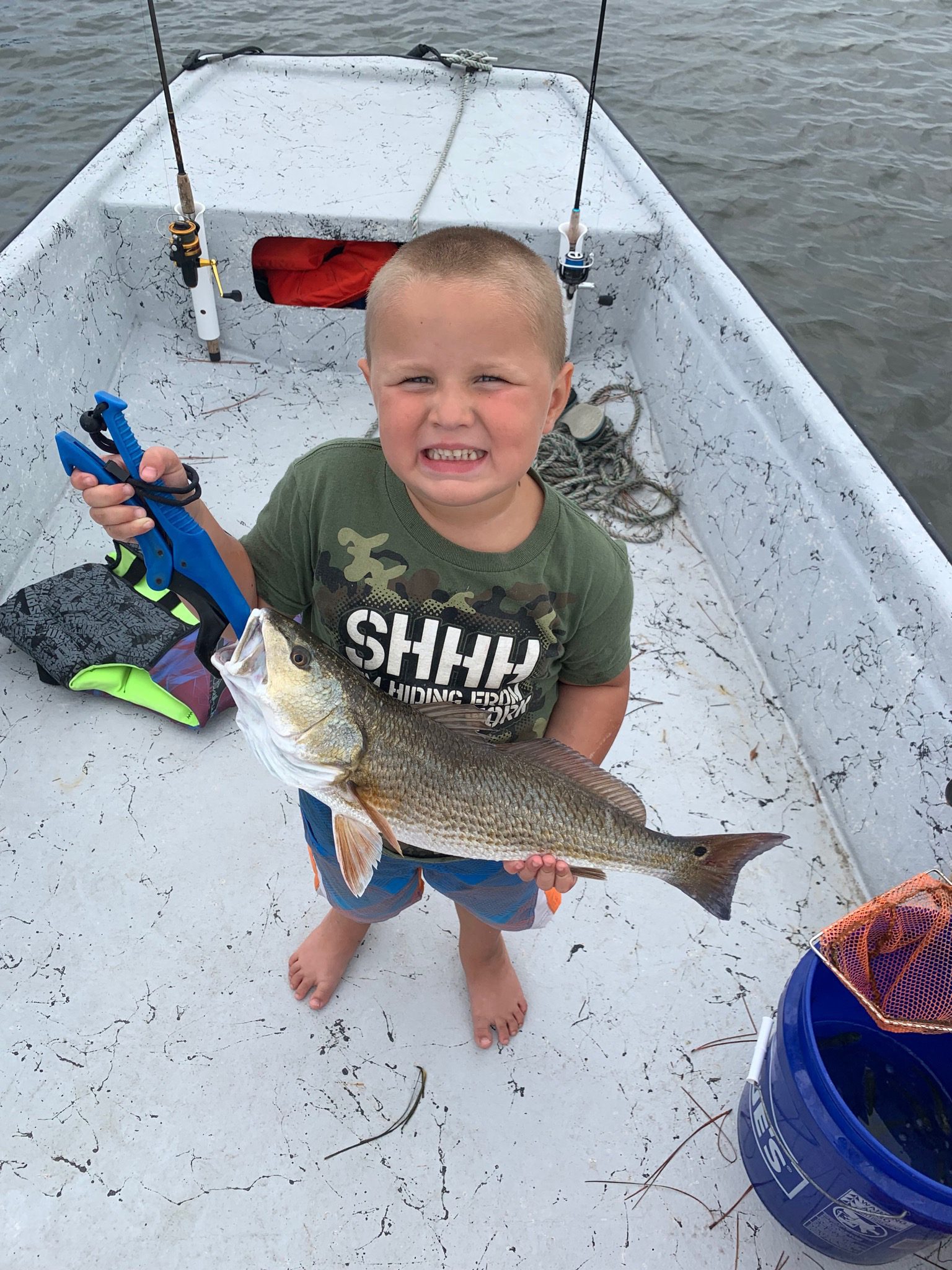 Ryan Hall (age 4), of Hampstead, NC, with a 22” red drum caught on a live finger mullet on a Carolina rig while fishing with his dad, JR Hall, on Topsail Island.

Mike, of Native Son Guide Service, reports that red drum fishing has been strong. The heat has kept the mid-day bite slow, but topwater plugs have been getting a lot of action in the early mornings and evenings. Anglers are having success in switching over to Carolina-rigged live baits as the sun gets higher in the sky.

There are a bunch of just-short flounder around, and the flounder are feeding on Carolina-rigged live mullet and pogies.

Spanish mackerel fishing has been productive, with limits of fish being caught both while trolling Clarkspoons and by casting jigs outside the inlet around the tide lines. Some larger, citation-sized fish are being caught around the nearshore ARs with live baits.

Flounder and black sea bass are around the same wrecks, and they’re hitting bucktails with soft plastic trailers.

Chadwick, of South End Anglers, reports that redfishing has been very good, even with high winds making for tough conditions. Topwater plugs are working great at sunrise, with soft plastics under 1/4 oz. jig heads and Carolina-rigged live baits producing well throughout the day.

Speckled trout have been striking topwater plugs in the mornings and especially in the evenings, seeming to avoid the mid-day heat.

Flounder are mixed in the counts, and they’re hitting baits bounced along the bottom near deeper grass banks and ledges. 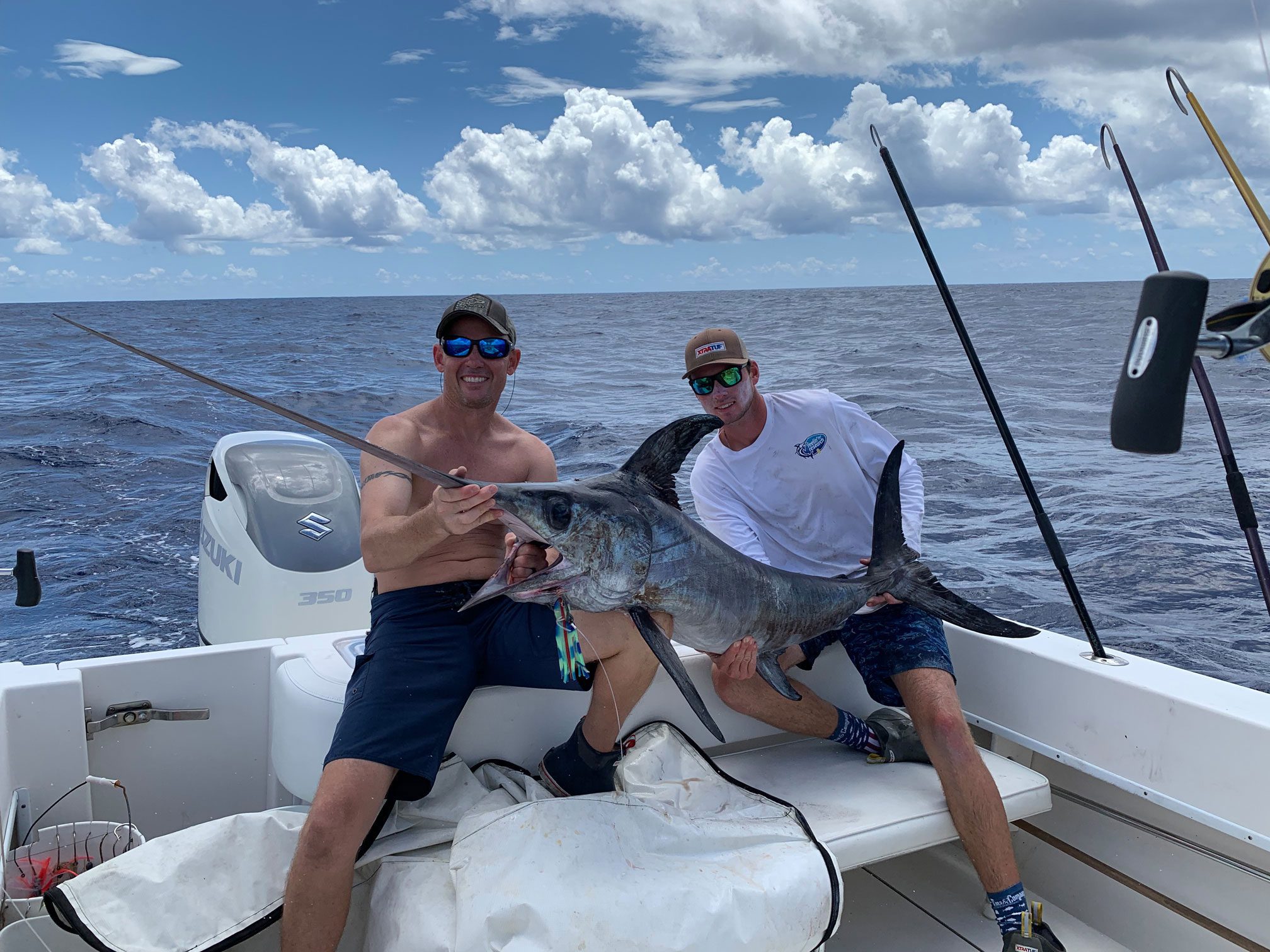 Ray, of Spring Tide Guide Service, reports that flounder fishing continues to be on fire at nearshore ARs. Spro bucktails with Z-Man soft plastic trailers have been a great producing setup all season.

Large spanish mackerel (up to 6 lbs.) are being caught while slow-trolling and light-lining live baits around the ARs.

Inshore fishing has been great for anglers targeting red drum, with topwater plugs producing quite a few over-slot fish.

Jim, of Plan 9 Charters, reports that the spanish mackerel bite has been good in the early morning hours. Targeting fish with size 0 and 00 Clarkspoons worked throughout the water column is producing limits of spanish.

Bottom fishing has been great for anglers focused in the 60-80’ depths, with keeper black sea bass, snapper, and gag grouper all mixed in the counts.

Some nice king mackerel are staged around the same structure in this 15 mile range, and they’re hitting light-lined live baits.

A few scattered mahi are mixed in, though the hot water has the bite sporadic.

John, of Pelagic Hunter Sportfishing, reports that inshore anglers are doing well when targeting red drum in the marshes. Topwater plugs and soft plastics fished on lighter jig heads are both producing well.

A few flounder are mixed in, and they’re hitting baits worked along the bottom.

Nearshore anglers are catching good numbers of spanish mackerel form areas just outside the inlet out to three miles while trolling Clarkspoons.

King mackerel are scattered with the warmer water, but the 5-15 mile range has seen better numbers of fish hitting live and dead bait king rigs.

Flounder are still grouped up at the ARs, and they’re falling for bucktails.

Tyler, of Seaview Pier, reports that anglers throwing Gotcha plugs are catching bluefish and spanish mackerel throughout the day, with the hot mid-days having less anglers (and less fish) on the planks.

Bottom fishing has been producing sea mullet, sheepshead, and a few flounder.

Edwin, of Surf City Pier, reports that spanish mackerel and bluefish fishing has been good for anglers casting Gotcha plugs and throwing jigs to surface-feeding schools. Early mornings and evenings have had the most consistent bite, but smaller schools do pop-ups throughout the day.

Bottom rigs with shrimp and Fishbites strips have been producing sea mullet, and nighttime anglers are catching good numbers of spot and sea mullet.

Sheepshead are being caught by fishing Carolina-rigged baits tight to the pier pilings.

A few king mackerel (up to 32 lbs.) have been caught by anglers fishing live baits off the end.

Brandy, of Jolly Roger Pier, reports that spanish mackerel are biting well in the early mornings. Bluefish are mixed in, but recent days have seen a better bite in the late afternoon. Gotcha plugs have worked best for both species.

Sheepshead are being caught by fishing sand fleas, fiddler crabs, and barnacles tight to the pilings.

The bottom fishing bite has been great at night, with a good mix of sea mullet, spot, croakers, and black drum feeding on shrimp.

Anglers fishing at the end of the pier are reporting king mackerel and tarpon rolling in the area.