Chris, of East Coast Sports, reports that nearshore anglers have been catching bigger flounder (up to 5 lbs.) at the ARs and ledges from just off the beach out to 5 miles. The ocean flounder are primarily falling for Gulp soft plastics on jig heads.

Spanish mackerel and bluefish are hitting glass minnow jigs cast to surface feeding schools, and getting on the sand in the early mornings and evenings has helped anglers spot the fish before they are affected by the crowds.

Inshore anglers report that hot water temperatures have the majority of the fish spread out, but red drum, flounder, and a few trout are still being caught on soft plastics and Carolina-rigged live baits. 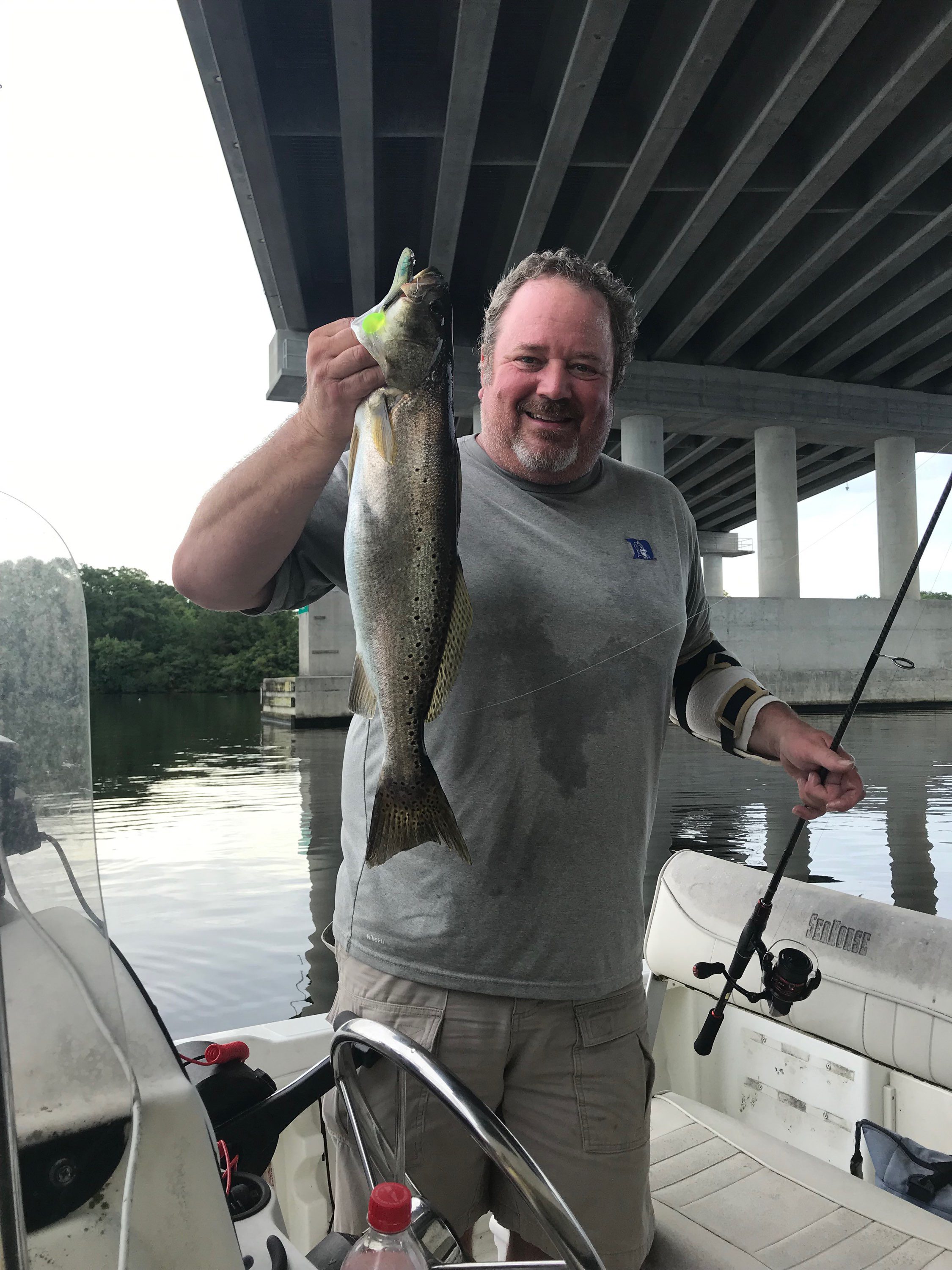 Lamar King with a 23.5” speckled trout caught near North Topsail while fishing the New River with Andy Hodges.

Mike, of Native Son Guide Service, reports that upper-slot red drum (up to 27”) have been caught with Carolina-rigged live menhaden. Targeting these fish in deeper holes and around docks has been the most productive in getting bites.

Anglers are finding speckled trout in the early mornings and late evenings while fishing MirrOlure Top Pups and She Dogs topwater plugs.

Nearshore anglers are enjoying a steady flounder bite, with limits of keeper flounder hitting Z-Man PaddlerZ soft plastics on 1 oz. jig heads. Carolina-rigged mullet has worked as well, but baits are often getting destroyed by all the short black sea bass in the area before they can be eaten by a flounder.

Spanish mackerel are holding in the 35-40’ range, and they’re hitting pink and clear-colored casting jigs when the spanish are spotted on the surface. 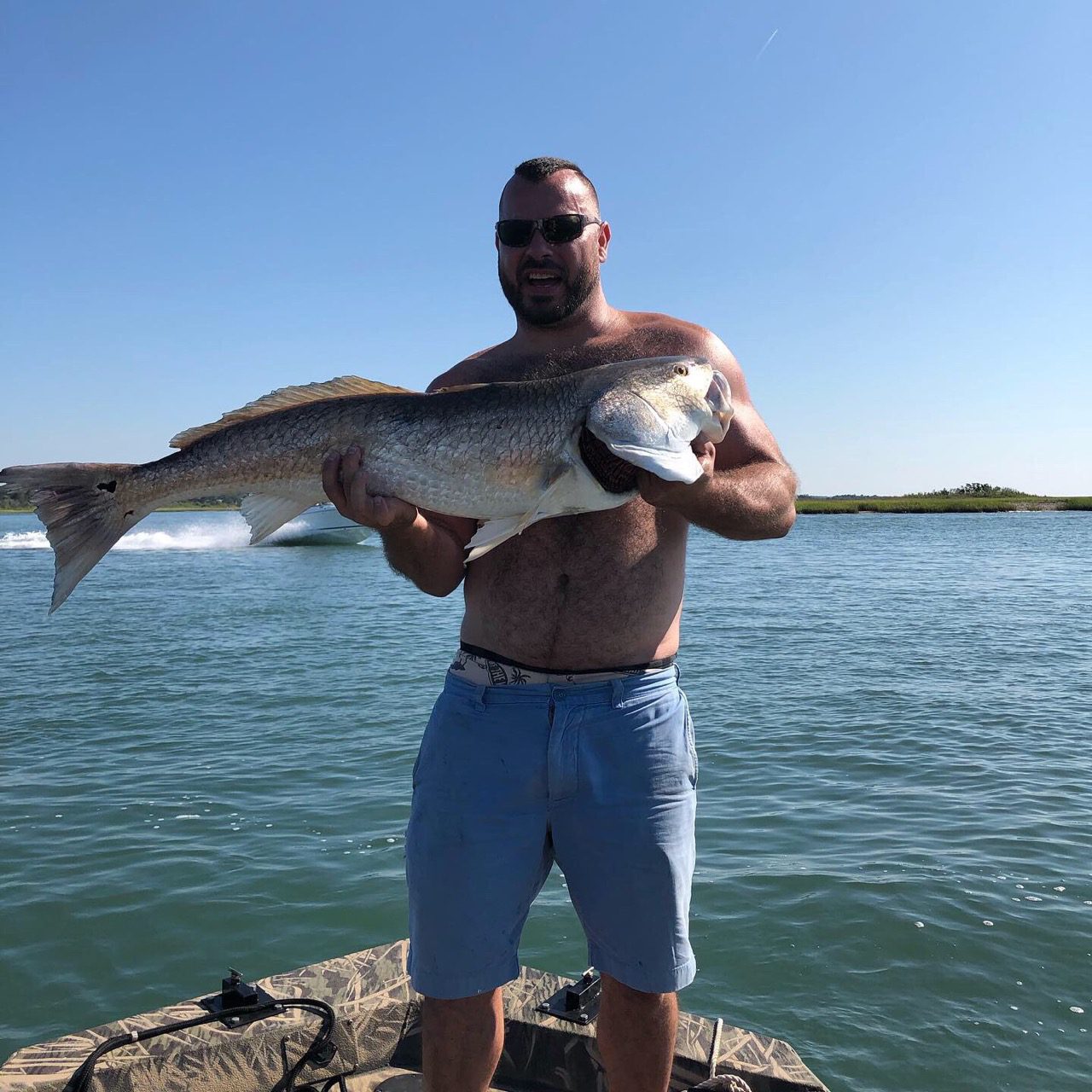 Jamie Hester, of Hampstead, NC, with an over-slot red drum that fell for a Carolina-rigged finger mulllet while fishing near Topsail Island.

Chadwick, of South End Anglers, reports that topwater fishing during the sunrise hours has been producing upper-slot red drum. As the day has worn on, the fish are sliding into deeper channels and grass banks in the marshes, where Carolina-rigged live baits and soft plastics have had more success.

A few flounder are mixed in the counts inshore, but many have been short or just on the line. Live baits have been the top producing baits for flatfish strikes.

Nearshore fishing has stayed strong, with black sea bass, flounder, red drum, sharks, and a few smaller cobia all being caught around structure.

Ray, of Spring Tide Guide Service, reports that anglers fishing at the nearshore ARs have been landing good numbers of flounder (up to 6 lbs.) while jigging bucktails along structure.

Inshore, anglers have been catching over-slot red drum while fishing topwater plugs early and soft plastics later in the day.

Smaller, under-sized flounder are mixed in, and they’re hitting soft plastics and live baits fished on the bottom.

Jim, of Plan 9 Charters, reports that the spanish mackerel bite has been great in the mornings while trolling spoons off the beach. Honing in on areas of nearshore structure has produced some of the larger spanish (up to 5 lbs.).

Mahi are as close as the 20 mile area, and they’re more often hitting dead bait rigs with ballyhoo.

Bottom fishing has been very good, with grouper, vermilion snapper, grunts, and keeper black sea bass all being caught with cut baits.

John, of Pelagic Hunter, reports that nearshore trips have been catching limits of spanish mackerel and bluefish while both trolling and casting spoons just off the beach.

Bottom fishing in to 80-100’ range has been generating a good variety of large grouper, black sea bass, grunts, snapper, and triggerfish.

A few king mackerel and false albacore are mixed in offshore, and the ones being hooked are large.

A few swordfish are being caught on trips heading deep to target them.

Tyler, of Seaview Pier reports that large sheepshead (up to 6 lbs.) are being caught by anglers fishing Carolina-rigged baits tight to the pilings.

Flounder (up to 19”) are hitting live baits fished in deeper holes just past the breakers, and bottom rigs with shrimp have been producing sea mullet and croakers.

Edwin, of Surf City Pier, reports that large spanish mackerel (up to 5.5 lbs.) are being caught with Gotcha plugs cast to feeding schools. Anglers out in the early mornings and evenings have spotted the most fish. A few bluefish are mixed in, though many of the blues have been smaller (up to 2 lbs.).

Anglers fishing live baits off the end have landed a few king mackerel (up to 28 lbs.).

The flounder bite has been particularly interesting this week, with multiple huge fish (up to 8 lbs.) being caught on Carolina-rigged live baits.

Brandy, of Jolly Roger Pier, reports that large king mackerel (up to 28 lbs.) are being hooked by anglers fishing live baits off the end.

Spanish mackerel (up to 4 lbs.) and bluefish are hitting Gotcha plugs cast to surface feeding schools.