Mike, of Native Son Guide Service, reports that spanish mackerel have been biting well off the beach in 12-25’ of water. Trolling Clarkspoons under small #1 and #00 planers has been the most productive method, with times between tide changes and with moving water being best.

Flounder are being caught in good numbers off the beach around reefs and live bottoms. Bucktails and heavier (1.5 oz.) jig heads with 6” Z-Man PaddlerZ soft plastics have been the best setups.

King mackerel are staged up at reefs a few miles outside the spanish mackerel schools. They’re falling for 3.5” Drone spoons and dead bait rigs with cigar minnows.

Red drum are starting to move inshore in better numbers with the arrival of finger mullet in the area. These fish have been staged just offshore on live bottoms and in the surf zone feeding on bait. Look for the reds to be feeding in the marsh during cooler parts of the day (early and late), with deeper holes and around ICW docks having a better bite in the heat of the day.

Flounder are being caught while dragging Carolina-rigged live mullet in deeper channels through the marsh. Many short flounder and lizardfish are mixed in, but perseverance has tended to pay off. 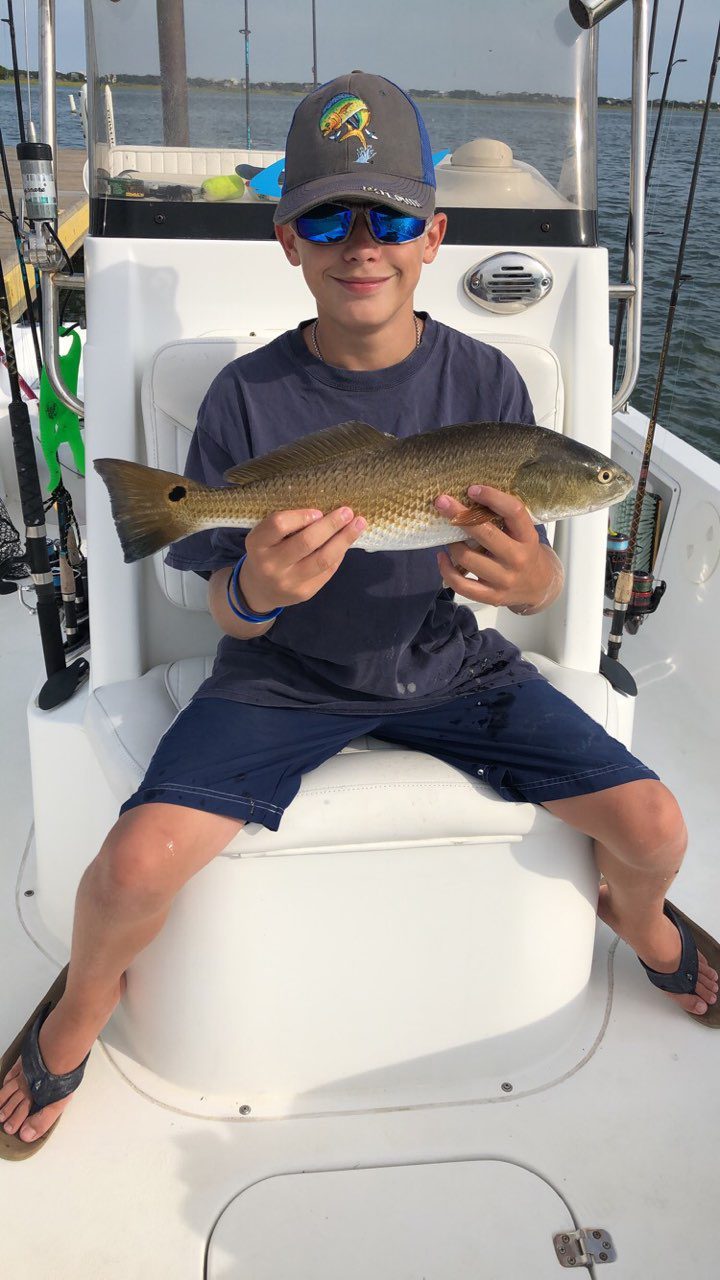 Eli King from Tennessee with a 20″ red drum that fell for a live mullet on a Carolina rig. He was fishing with Capt. Corey Mizelle of Pirate Fishing Charters in Topsail.

Chadwick, of South End Anglers, reports that red drum fishing has been great in marsh areas and around ICW docks. Fishing at times around peak boating hours has helped with the amount of action. Topwater plugs are working well in the early mornings, and then anglers have had success switching to cut baits.

A few black drum are being caught on shrimp around deep grass banks and oyster beds.

Speckled trout are hitting topwater plugs in the morning.

Ray, of Spring Tide Charters, reports that red drum fishing has been very good, with smaller schools pushing into the marsh areas and hanging around docks in the ICW. Topwater plugs have been getting some huge blow-ups in the morning, but as the sun rises and boat traffic picks up, the fish move into holes and deeper areas around docks. Fishing soft plastics and Carolina-rigged live baits in these areas has been landing fish throughout the afternoon.

A few short flounder are mixed in the same areas with the reds, and anglers anticipate seeing some keeper-sized fish push inshore in the coming weeks.

Jim, of Plan 9 Charters, reports that large spanish mackerel and teenager-sized king mackerel are staged up at the nearshore ARs from 3-7 miles.

Mahi are pushing inshore around 20 miles, though the bite has been scattered. 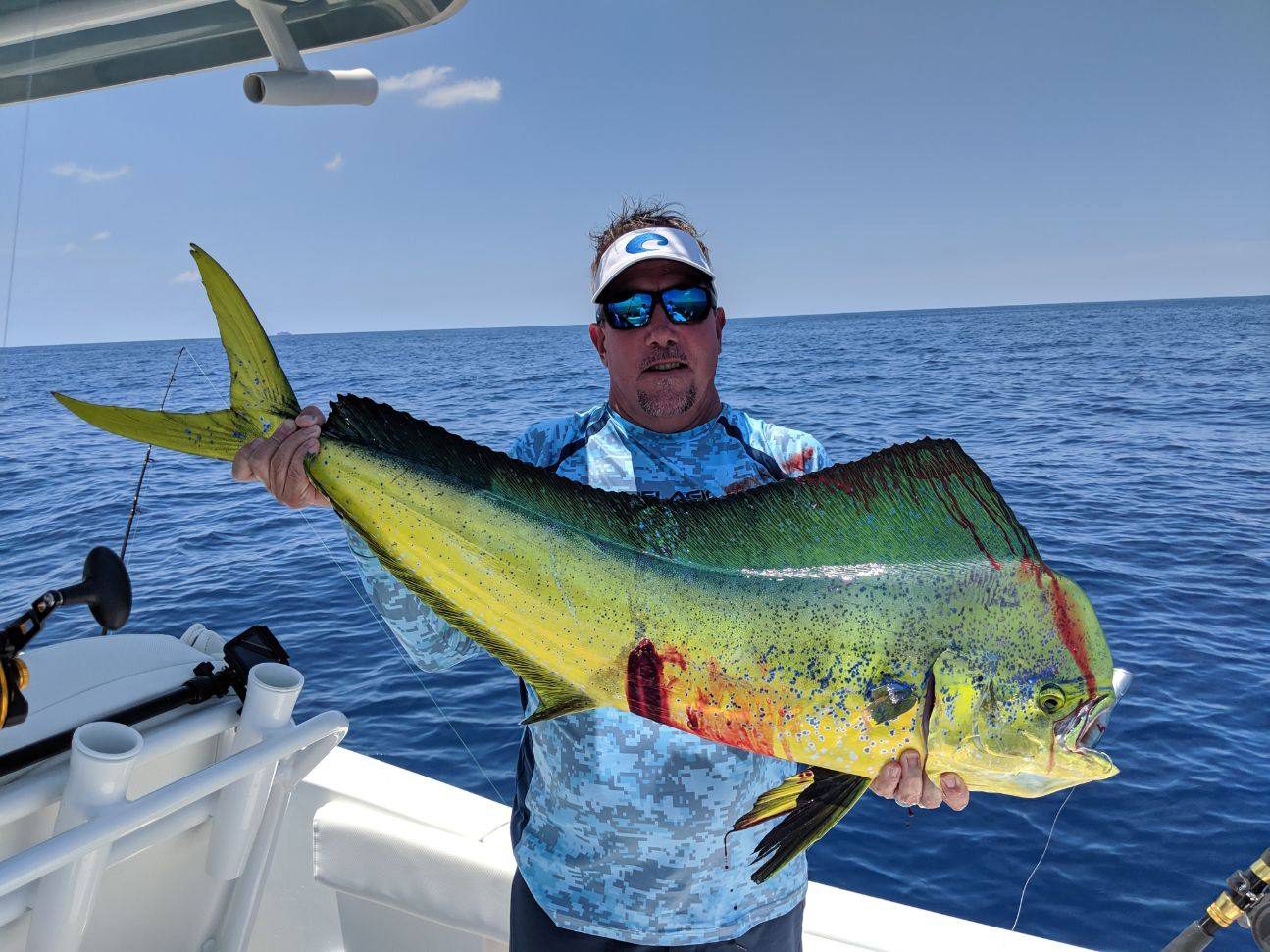 John, of Pelagic Hunter, reports that bottom fishing has been producing great numbers of large grouper.

Black sea bass are holding just above structure and are not picky about any sort of cut bait dropped down.

Beeliners are mixed in with the legal-sized sea bass. They’re biting cut baits.

Amberjack and barracuda are staged up at the ARs and live bottoms and hitting vertical jigs and free-lined live baits.

A few cobia are being caught around these same reefs with live bait.

The mahi have started to scatter with the water temperatures rising, but a few fish are being caught around grass lines.

Nearshore ARs have been loaded with summertime king mackerel (up to 18 lbs.). Anglers have had success slow trolling live baits and cigar minnows on dead bait rigs.

Some large spanish mackerel (up to 6 lbs.) are mixed in with the kings.

Tyler, of Seaview Pier, reports that spanish mackerel (up to 4 lbs.) are being caught with casting jigs when the spanish are feeding on the surface.

A few bluefish are mixed in, but most of the blues have been small.

Keeper flounder are feeding on live baits fished under a Carolina rig.

Anglers are finding scattered spot and croakers hitting bottom rigs throughout the day.

Edwin, of Surf City Pier, reports that flounder fishing has been getting better as the fish push inshore from the ARs. Carolina-rigged live mud minnows fished closer to the breakers have been bringing some keeper-sized fish over the rails.

Bottom fishing has been slow, but anglers are reporting a mixed bag of sea mullet, spot, and pompano when fishing shrimp on bottom rigs.

Spanish mackerel have been feeding around the pier, and casting Gotcha plugs has been successful in catching a few.

Schools of bluefish are mixed in, though not as commonplace as in recent weeks.

Anglers fishing off the end have reported king mackerel and tarpon in the area, but landing a fish hasn’t been easy in recent days.

Brandy, of Jolly Roger Pier, reports that bluefish and spanish mackerel have been biting well early and late in the day for anglers using Gotcha plugs.

A few speckled trout are being caught in holes closer to the beach with soft plastics.

Flounder are being landed in the same holes with Carolina-rigged live mud minnows.

Puppy and over-slot red drum are feeding on cut mullet.

Anglers fishing at night are finding good numbers of croakers and spot.