Mike, of Native Son Guide Service, reports that spanish mackerel and bluefish are hitting Clarkspoons trolled from the beach out to three miles. Some larger spanish mackerel (to 5 lbs.) are being caught around the local ARs.

King mackerel are in the 2-5 mile range and hanging on nearshore structure.

Red drum have pushed into the inlets and are staged up on flats behind the beach. Soft plastics on lighter jig heads have been producing most of the fish.

A few flounder are holding on deeper grass banks off the ICW.

Black drum and sheepshead are being caught around docks in the ICW while using Carolina-rigged sand fleas and fiddler crabs.

Speckled trout are hitting topwater baits early in the morning, but the heat has fish pushing deep right after sunrise. 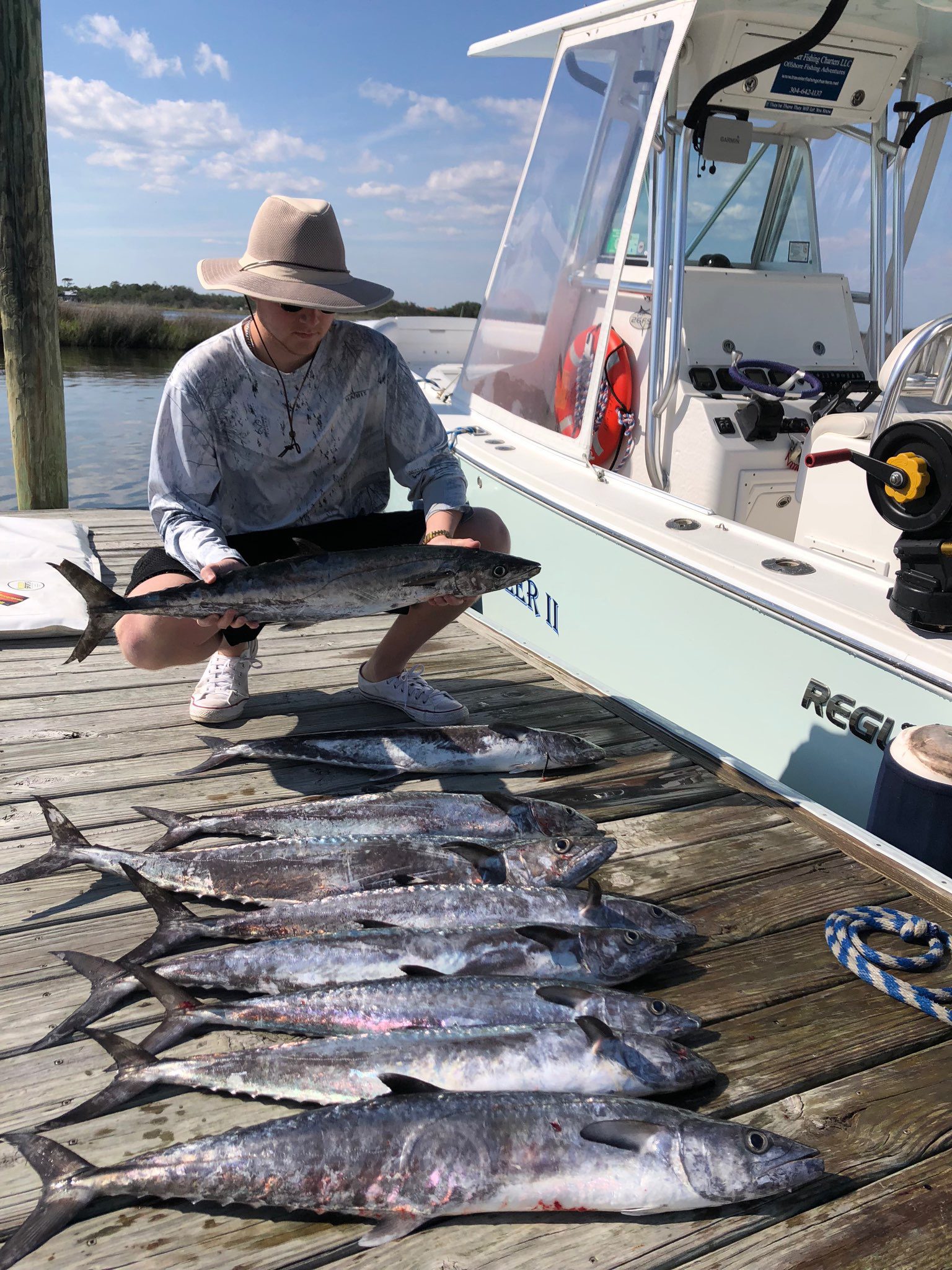 Austin Wolfe with an assortment of keeper black drum that fell for dead shrimp. He was fishing some docks in Sneads Ferry, NC.

Chadwick, of South End Anglers, reports that anglers have been enjoying hot red drum fishing in the area. The fish have broken off into smaller schools that are staged on flats and marsh areas, and they’re feeding on bait schools. Casting soft plastic jerk shads has been working great, and so has Carolina-rigged live pogies.

A few speckled trout are around the deeper grass banks. They’re being caught on popping cork rigs. With water temperatures rising, anglers have noticed the trout bite being focused mainly in the early morning hours.

Bluefish are in these same deep holes, and they’re hitting soft plastics and cut bait.

Flounder are falling for soft plastics bounced along the bottom in deeper holes with at least 3-8’ of water.

Black drum and sheepshead are being caught around docks and bridge pilings.

Off the beach, spanish mackerel are hitting Clarkspoons trolled behind planers.

Ray, of Spring Tide Guide Service, reports that spanish mackerel fishing has been great, with plenty of 2-6 lb. fish hitting Clarkspoons trolled behind #1 planers. When fish have been feeding on the surface, anglers are having success in casting Big Nic Spanish Candy jigs.

Good numbers of bluefish are mixed in with the spanish, and they’re mostly hitting spoons trolled at around 5 knots.

King mackerel are holding at reefs in the 3-7 mile range. Most of these fish are schoolie (7-15 lb.) fish, with a few larger (20+ lb.) kings hitting slow-trolled live baits.

Inshore anglers are finding red drum on the flats off channels in the marsh. Lighter jig heads and jerk shad soft plastics have been working great in getting these slot-sized fish to bite.

A few flounder are mixed in with the reds, and they’re predominantly on the ledges off these inshore flats. 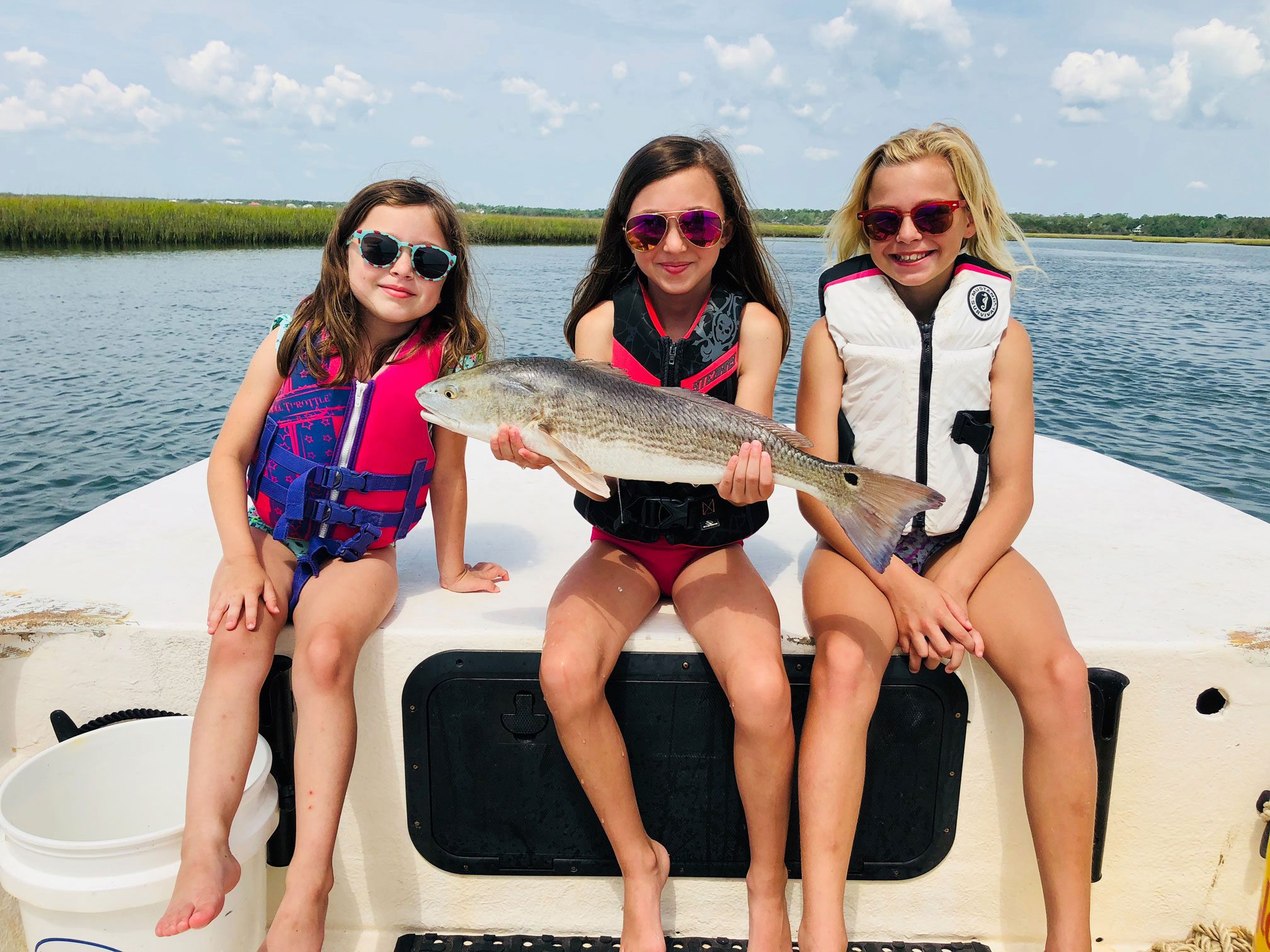 Charlie Lea, Bailey Lea, and Juliana Benson with a 25″ red drum that Bailey caught with live bait on a Carolina rig while fishing near Lea Island.

Jim, of Plan 9 Charters, reports that spanish mackerel and bluefish have been chewing in huge numbers from the beach out to three miles. Anglers are having no problem catching their limits when trolling spoons behind a planer.

The ARs in the 5 mile range are holding plenty of king mackerel, and the kings are hitting spoons and dead bait rigs.

John, of Pelagic Hunter, reports that the mahi bite has been great in the Gulf Stream. Pulling skirted ballyhoo and lures around weed lines has been producing plenty of gaffer-sized fish and a few bulls (to 40 lbs.).

Wahoo are mixed in and are striking baits fished deeper and/or under a planer.

Bottom fishing with squid and cut mackerel has been producing good-sized grouper and snapper.

King mackerel are being caught in large numbers around ARs from 2-10 miles offshore on dead bait rigs.

Spanish mackerel are loaded up just past the breakers. Anglers have been finding easy limits of smaller (14”) fish, and false albacore are being caught by casting jigs at fish feeding around the shrimp boats.

Tyler, of Seaview Pier reports that bluefish are hitting Gotcha plugs thrown to feeding schools. A few larger fish (to 6 lbs.) have been mixed in with the tailor-sized ones.

Sea mullet are being caught with shrimp fished on bottom rigs.

On clear water days, anglers are finding a few pompano on sand fleas.

Edwin, of Surf City Pier, reports that sea mullet are hitting shrimp and Fishbites bloodworm strips fished on bottom rigs. A couple of large spot have been mixed in with all the sea mullet coming over the rails.

Keeper-sized flounder (to 19”) are being hooked on baits and soft plastics fished along the bottom.

Sheepshead and spadefish are being caught on sand fleas and shrimp fished tight to the pier pilings.

Sheepshead and pompano are falling for Carolina-rigged sand fleas fished near the pilings.

Some speckled trout are feeding in the mornings and evenings, and the best tactic is soft plastics fished closer to shore.