Mike, of Native Son, reports that trout have been in their winter holes. The key to getting them is to fish a couple of days past any cold fronts to give the weather time to warm back up, but this will be less important come April. Always fish with a slow retrieve this time of year, using suspending baits like MirrOdines and X-Raps, or the lightest jig head that you can get away with.

Red and black drum alike have been found around docks and other structure, and the bait of choice right now has been small pieces of shrimp on a Carolina rig. Artificials will work if you deadstick them, but shrimp just works better overall.

The beginning of the bonito run should be starting very soon off the beach. As soon as the water temperature gets to 60 degrees and stays there for a couple of weeks, the fish will move in.

Chadwick, of South End Anglers, reports that redfish have been very predictable, hanging in the creeks and on docks, flats, and oyster beds. Z-Man plastics on Fathom jig heads and Mustad grip pin rigging hooks have been doing the trick, as have fresh shrimp and crab on knocker rigs. The surf zone has been holding reds as well when the conditions are right. Use the lightest jig head possible with a Z-Man soft plastic with Pro Cure. Spoons and hard twitchbaits will also work.

Good numbers of speckled trout have been swimming in the mainland creeks and in some of the boat basins and marinas. Some nice-sized fish have been in the mix, though the specks have mostly been in the 13-14” range. Z-Man soft plastics on Fathom jig heads as well as MirrOlure MR17 and 18s and Rapala X-Raps will get a bite. Live mud minnows under slip corks have also been drawing attention.

Flounder have been scattered throughout the marsh. Most of them have been throwbacks, but a few keepers have been around. Slowly retrieved Betts Halo Shads are a great tool for pulling them off the bottom.

Lots of black sea bass have been holding on the nearshore bottom. Chicken rigs with squid or metal jigs and bucktails have been getting the most bites. The occasional tuatog and sheepshead are also being caught.

There may be an early run of Atlantic bonito this year if the spring-like conditions continue, and there have already been a few false albacore showing up within sight of land. 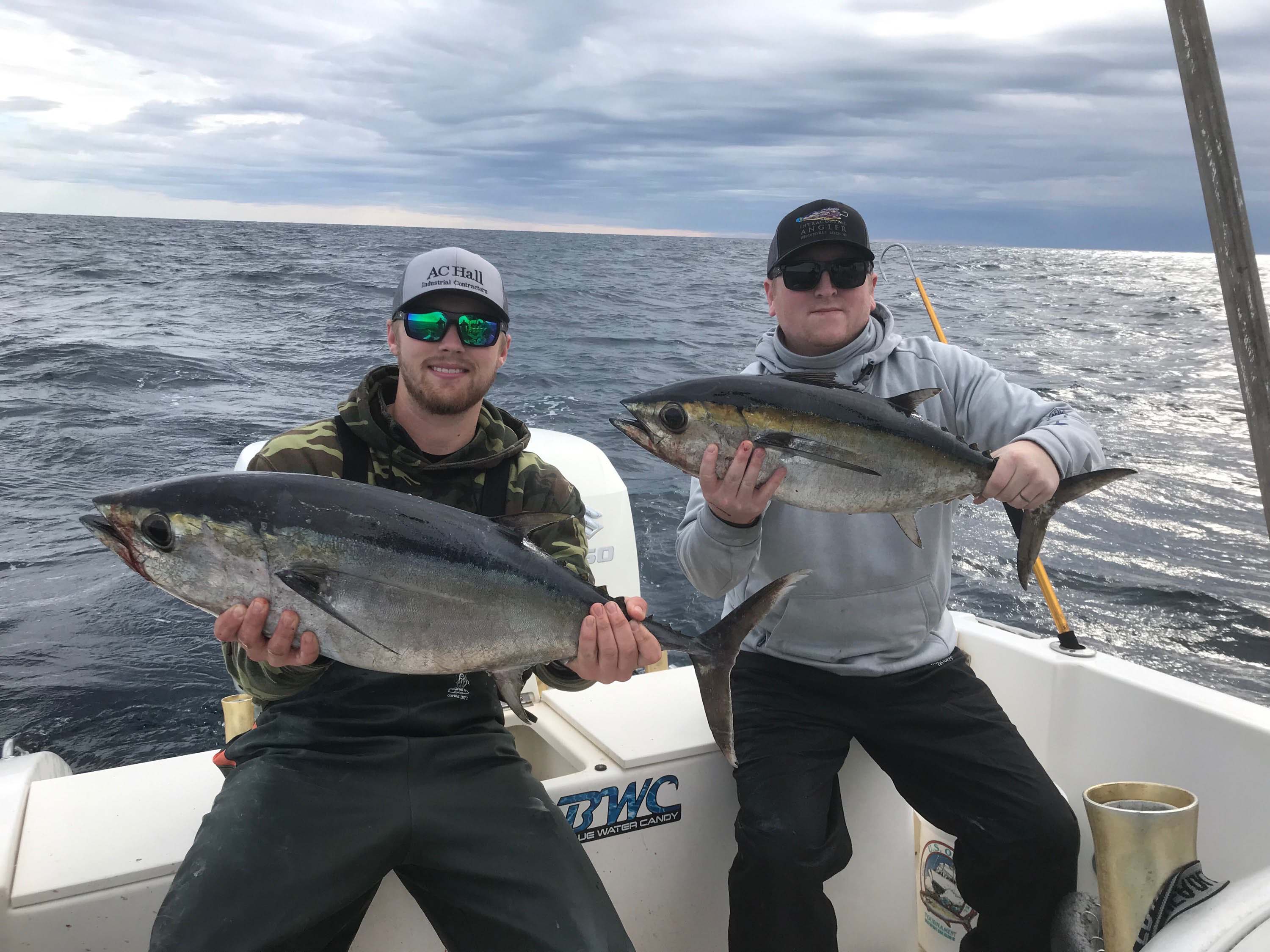 Paul Swick (left) and Pierre Agena (right) landed these blackfin tuna on skirted mono ballyhoo rigs in 250’ of water while over structure. They were fishing with Capt. Daniel Batts, of Surf City Charters.

Ray, of Spring Tide Guide Service, reports 50-100 fish days when targeting speckled trout in the creeks, though most of the catch has been just under keeper size. Some keepers and a few citation fish have been mixed in, but they are few and far between. MR17s in any variation of pink have been working, as have Bass Assassin grubs and Chicken on a Chain lures. On warmer days, the specks will hit topwater lures, and that will continue to improve over the next couple of weeks.

Redfish can be found on the flats in very shallow water, where a variation of grubs can grab their attention. Reds have been biting Carolina-rigged shrimp around docks as well. Shrimp will also work on the black drum that are holding back in the creeks, though the bite is very hit or miss.

Bait (mostly mullet) has been thicker back in the creeks than it is near the beach, and finding bait will be the ticket to getting a good bite from any of the species that you’re targeting.

Jim, of Plan 9 Charters, reports that fishing has been picking up. Red drum can be found right behind the breakers on area beaches and inlets. The fish range anywhere from rat-sized to upper-slot, and they can be fooled with white grubs, silver Castmasters, and 1 oz. Hopkins lures. Fishing on a west or northwest wind is ideal, as the reds become easier to spot.

Bluefish have been showing up in the 5-10 mile range, and they’ve been mixed in with some false albacore.

Sea bass fishing has been productive offshore, with the best fish coming from the 20 mile range.

John, of Pelagic Sportfishing, reports that big false albacore have been swimming between 5-20 miles, and there are plenty of them out there to cast jigs to. There have even been a few Atlantic bonito being caught, and within the next couple of weeks, they will move in to the 60-80’ range.

The bottom has been holding sea bass, grunts, and snappers, which makes for great fishing this time of year. Jigs, squid, and cut bait have all been getting bites.

The wahoo bite has been exceptional this year, with a big class of citation fish coming in on standard medium-large ballyhoo over Sea Witches and Ilanders. The hoo’s have been anywhere between 140-300’ of water, with 180’ in particular seeming to be the sweet spot over the last couple of days. The yellowfin bite has also been impressive, and at least one 292 lb. bluefin has been caught.

The next few weeks should bring in the start of a fantastic mahi season. 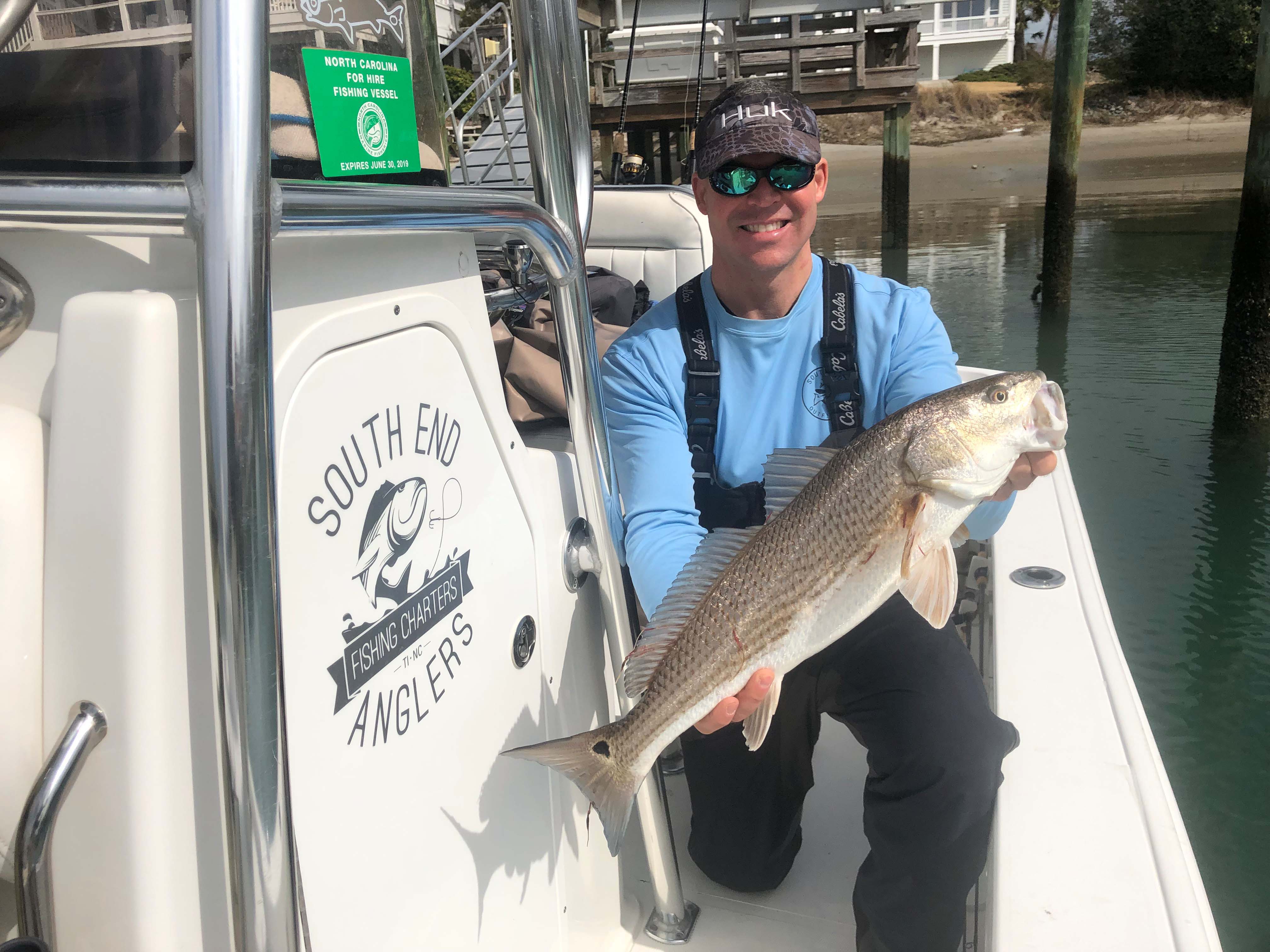 Beau Bethea, of Hampstead, NC, landed this slot red drum that fell for a fresh shrimp on a 3/0 circle hook. He was fishing around some docks in Topsail with Capt. Chadwick Crawford, of South End Anglers.

Nick, of Jolly Roger Pier, reports that there have been a lot of puffers and skates coming in, in addition to small sea mullet during the day and bigger sea mullet around sundown. A few trout have come through in the last week, but they disappeared shortly after. One black drum has also been recently caught.

Ed, of Surf City Pier, reports that after the damages sustained during Hurricane Florence, the pier is partially open to fishing during the day, with repairs to the end of the pier anticipated to be completed by the end of March. Puffers are being caught regularly, and sea mullet have just started to show up. A couple of bluefish and flounder have been landed as well, and a 2.13 lb. sheepshead was caught recently.

Tyler, of Seaview Fishing Pier, reports that since the pier has reopened, a few puffers and a couple of sea mullet have been caught.