Mike, of Native Son Guide Service, reports that the king mackerel bite has been excellent. Anglers are finding schoolie fish (8-15 lbs.) from the beach out to 5 miles.

Spanish mackerel are in the same areas, and trolling Clarkspoons behind planers are getting anglers close to limits.

Bonito are being caught around local ARs. In the early mornings, casting diamond jigs at surface feeding schools has been the preferred method. As the day moves on, switching to trolling to cover more water has continued to produce bites.

Red drum have been pushing inshore and breaking up into their smaller summer schools. Anglers are catching the drum around docks in the ICW with jerk shad soft plastics, and they’re also starting to see a few move into the marsh.

A few flounder have moved inside the inlet and are staged up in deeper channels with current.

Speckled trout are being caught early and late in the day with soft plastics. Topwater plugs, such as the MirrOlure Top Pups and She Dogs, have been getting action on days with lighter wind or in the early mornings.

Chadwick, of South End Anglers, reports that anglers have found the inshore bite really picking up as more bait pushes into the inlet.

Slot-sized red drum are hitting soft plastic jerk shads in the marsh and flats around the inlet. Casting baits around the ICW docks will produce a few bites, too. In the early mornings, anglers have also been throwing topwater plugs and getting a few nice reds to strike.

Flounder numbers are getting better with each day, and casting soft plastics or Carolina-rigged live baits around deeper ledges and channels with moving water has produced bites.

Black drum are being caught on Carolina rigs around docks.

Bluefish are hitting topwater plugs on deeper banks and the edges of channels. 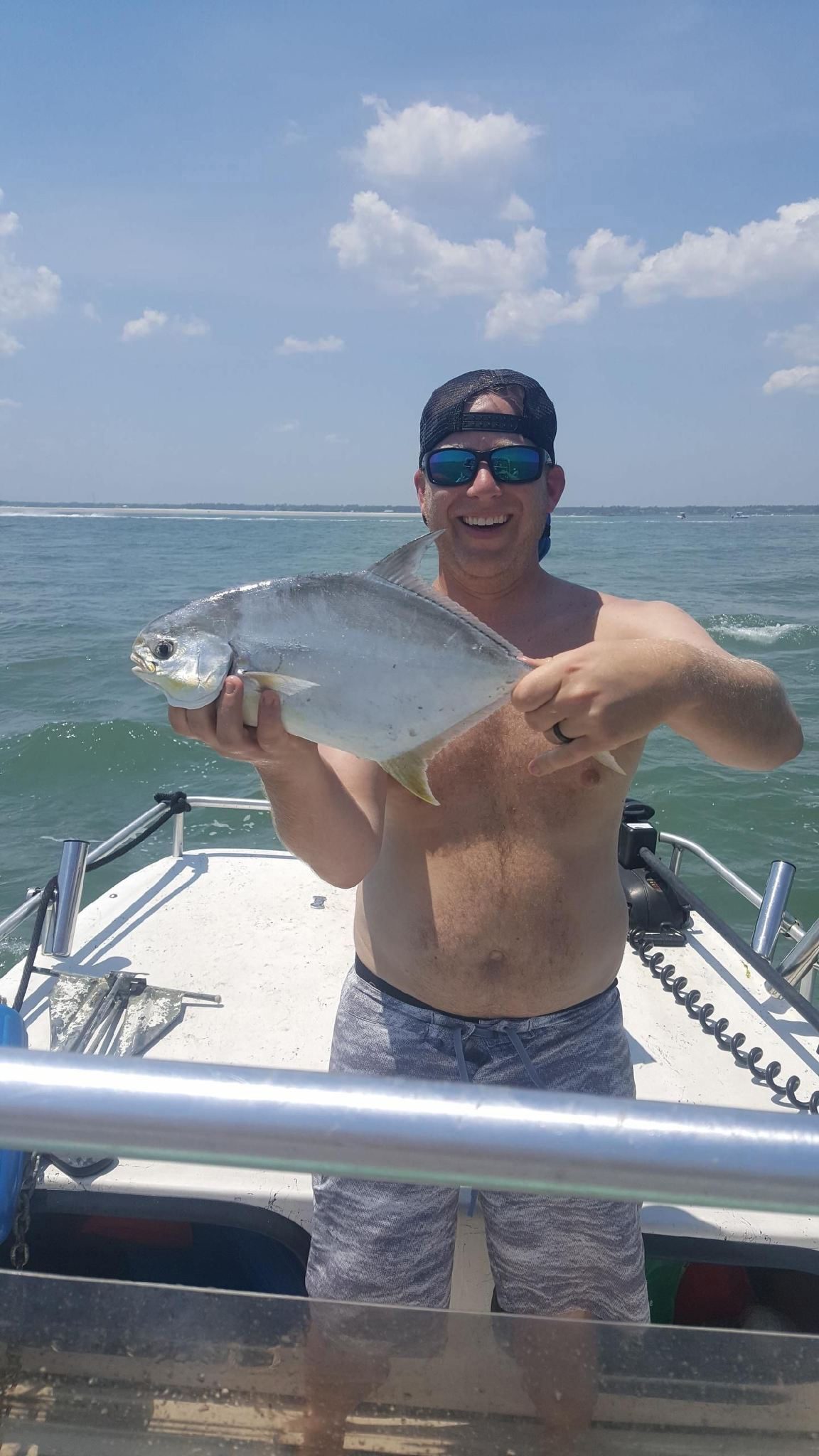 Derek Dombrowski, of St. Michaels, MD, with a pompano caught in the New Topsail Inlet on a bottom rig with shrimp.

Ray, of Spring Tide Guide Service, reports that spanish mackerel are schooled from the beach out to two miles. Casting jigs at feeding schools has worked in the mornings, and switching to Clarkspoons behind planers helps locate fish later in the day as the fish move deeper with the bait pods.

Bluefish are both outside the breakers and inside the inlet.

The red drum bite has been good, with anglers catching fish on soft plastics on flats around the marsh. Fishing Carolina-rigged cut or live baits around dock pilings has produced a few fish as well.

Black drum are being caught around docks and deeper banks in the ICW.

Speckled trout are hitting topwater plugs in the morning, with soft plastics working better as the day wears on.

Flounder numbers have picked up on the inside, though a majority of fish are just short.

Jim, of Plan 9 Charters, reports that spanish mackerel are being caught in great numbers from the beach out to two miles.

Schools of bluefish are mixed in with the spanish and have been more prevalent just past the breakers.

King mackerel are holding on structure in the 2-5 mile range. There are good numbers of fish in the area, and most anglers are reporting schoolie fish (to 15 lbs.).

Smaller bonito are being caught around the local ARs with deep diver plugs.

John, of Pelagic Hunter, reports that the king mackerel bite has been great at the ARs and local structure nearshore. Trolling deep diver plugs and Drone spoons behind a planer are both producing limits of these mid-class fish (to 18 lbs.).

Spanish mackerel and bluefish are hitting smaller Clarkspoons behind planers.

Bonito have made a strong showing in the area this year, and anglers have enjoyed sight-casting jigs to feeding schools in the mornings.

A few schools of large false albacore are mixed in around the bonito.

Big sharks are being caught around the local shrimp boats.

Wahoo and mahi are being caught out at the break while pulling skirted ballyhoo.

Tyler, of Seaview Pier, reports that sea mullet are being caught in good numbers with shrimp on bottom rigs.

A few quality black drum are hitting the same baits as the sea mullet.

Big schools of bluefish and spanish mackerel have been showing around the pier. Anglers have been successful when casting Gotcha plugs and glass minnow jigs at the fish as they feed on the surface.

Edwin, of Surf City Pier, reports that large pompano (to 2 lbs.) are being caught on sand fleas and Fishbites strips fished close to the breakers.

A few black drum are biting sand fleas and shrimp fished on the bottom, and smaller flounder (to 12”) are hitting bottom rigs and soft plastics dragged along the bottom.

Sheepshead are hanging around the pilings, and live fiddler crabs or sand fleas are catching a few fish.

Sea mullet are feeding on shrimp fished on bottom rigs.

Bluefish and spanish mackerel are being caught towards the end of the pier.

Anglers at the end of the pier are also starting to catch a few king mackerel (to 21 lbs.), and they anticipate seeing the bite get better as the water temperatures continue to warm.

Brandy, of Jolly Roger Pier, reports that spanish mackerel are being caught in really good numbers on Gotcha plugs.

Schools of smaller bluefish (1-4 lbs.) have been mixed in with the spanish. They’re hitting Gotcha plugs and cut bait fished on bottom rigs.

The flounder action is starting to turn on when fishing both soft plastics and Carolina rigs. A majority of the fish have been short, but anglers are slowly seeing the keeper ratio rise.

Black drum (to 5 lbs.) are being caught on Carolina-rigged cut bait.

Sheepshead are being spotted around the pilings, and anglers will have success dropping down sand fleas and fiddler crabs.

Fishing shrimp on a bottom rig is producing sea mullet and croaker.