Chris, of East Coast Sports, reports that inshore anglers have been catching good numbers of red drum and flounder (released) while working grass banks and docks along the ICW. Carolina-rigged live baits have been working best, with soft plastics on 1/4 oz. jig heads also getting strikes.

Surf anglers have been casting spoons to schools of bluefish working along the beaches.

Spot runs have been happening at the local piers, with the night-time bite the best time to target these fish.

Nearshore anglers have been landing spanish mackerel while casting glass minnow jigs to schools of fish feeding on baits beyond the surf zone.

Offshore anglers have been targeting the great wahoo bite that has just begun. 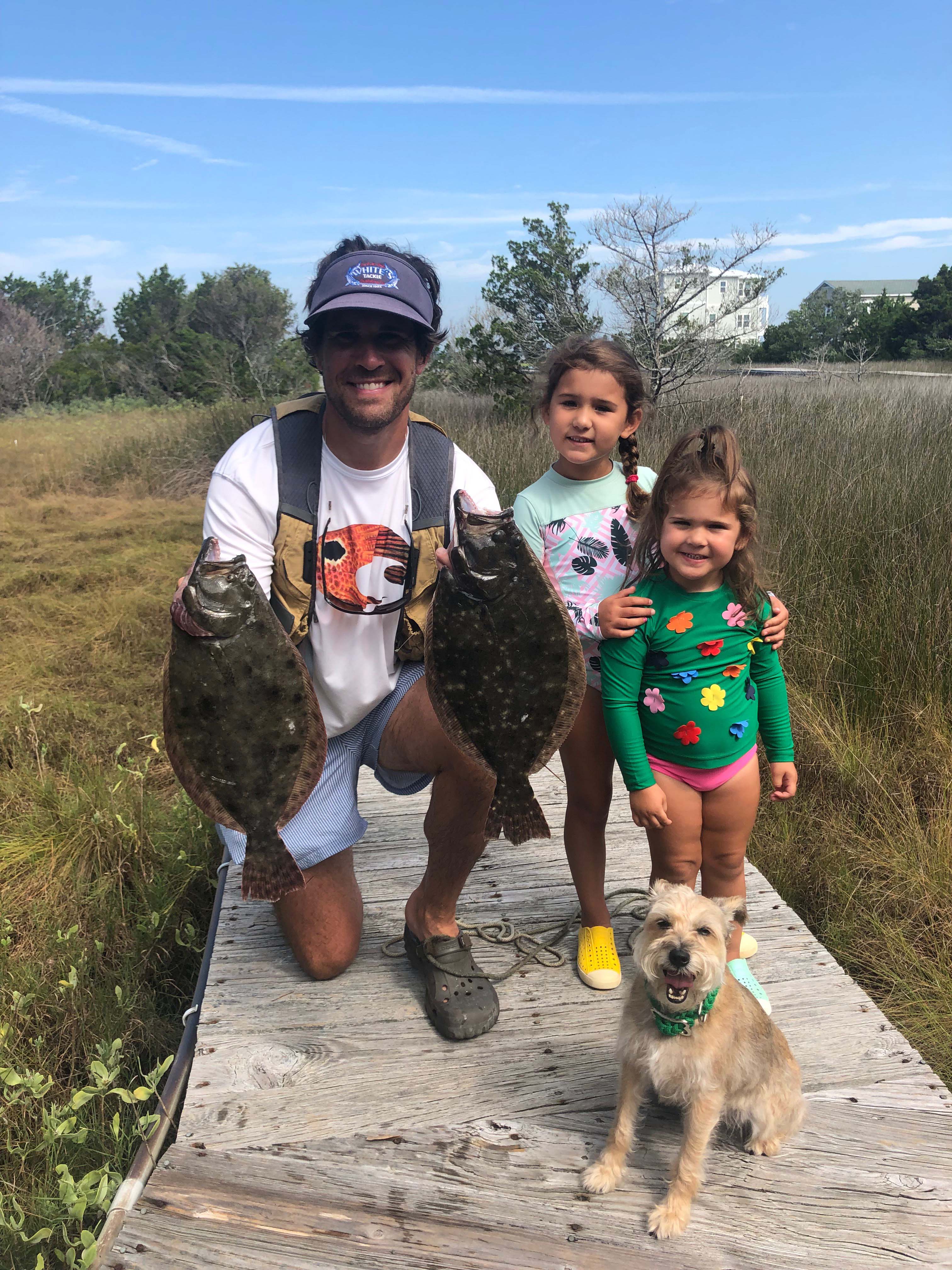 Joe Elmore, of Greensboro, NC, with a pair of flounder caught while fishing Topsail docks on his kayak with his daughters, Parker and Josie. The fish measured 19″ and 20″ and fell for Vudu shrimp.

Mike, of Native Son Guide Service, reports that red drum and the occasional speckled trout are being caught in a variety of areas as they transition into fall-time haunts with the moving of bait. Targeting deeper channels and holes in the marshes and along the ICW have been great starting points for anglers seeking these smaller groups of fish.

Nearshore anglers are casting jigs to spanish mackerel schooled up from the inlet out to areas around the local ARs.

False albacore have shown already this year, and the wind switching back to NE should push them closer to the beaches.

With the mullet run starting, anglers are having success with Carolina-rigged live and cut bait on the 10-14” bumper class of fish being seen.

Speckled trout fishing has been hit and miss (due to the warm water), with most fish being hooked both early and late in the day. Topwater baits such as Super Spooks and Rapala Skitterwalks are great for this early fall season bite. MirrOlures and Rapala X-Raps suspending lures, as well as Z-Man soft plastics, work well once locating these groups of fish.

False albacore have been showing well over the past week, and they’re hitting Hogy Epoxy Minnows and the smaller-sized Jigfish to match all the bay anchovies and glass minnows off the beach. Some anglers choosing to fly fish when conditions allow are having success with Clouser Minnows and Surf Candies.

Spanish mackerel are in the mix, and they’re hitting the same casting lures, as well as spoons trolled behind a planer.

King mackerel fishing has been up and down, but cooler water temperatures should greatly increase the action.

Anglers should carry rods for cobia while out bottom fishing, as some cobia are being spotted as they migrate back through our area over the next few weeks.

Ray, of Spring Tide Guide Service, reports that red drum fishing has been good, with anglers finding fish while throwing both topwater plugs and soft plastics.

A few flounder are being caught as by-catch when targeting the drum.

Nearshore anglers saw a run of false albacore off the beaches before the last heat wave. As the water temperatures drop a little this month, the fish should return to feed on the bait coming out of the inlets.

Jim, of Plan 9 Charters, reports that the grouper bite has picked back up and anglers anticipate it only getting better as the water cools more. The best fishing has been between 80-100’ of water with cut baits.

Closer to the beach, anglers are finding a few schools of false albacore while trolling Clarkspoons and casting Blue Water Candy Thing-A-Ma-Jigs.

A few large cobia are hanging around the offshore reefs.

Schools of false albacore are spread out from the beaches out to 10 miles. Cooler water in the coming weeks should see the consistency of this bite improve.

Trolling in the Stream has produced really good numbers of wahoo and scattered (gaffer) mahi.

Swordfish are being caught when anglers choose to go deep in search of bites.

Tyler, of Seaview Pier, reports that spots are the hot bite. Anglers fishing both nights and days are landing coolers full of fish while casting out bloodworms. Targeting the incoming tides has seemed to be the most productive.

Spanish mackerel and bluefish are being caught with Diamond jigs cast at feeding schools of fish.

Bottom rigs with shrimp have been landing sea mullet and pinfish.

Edwin, of Surf City Pier, reports that spot fishing has been great, with the majority of fish being caught at night.

Bottom fishing has produced sea mullet, sheepshead (up to 4.5 lbs.), and pompano.

Anglers live baiting off the end have landed a few king mackerel (up to 25 lbs.).

A few puppy drum are being hooked on Carolina-rigged cut baits.

Bottom fishing with bloodworms or shrimp is producing spot, sea mullet, and croakers.